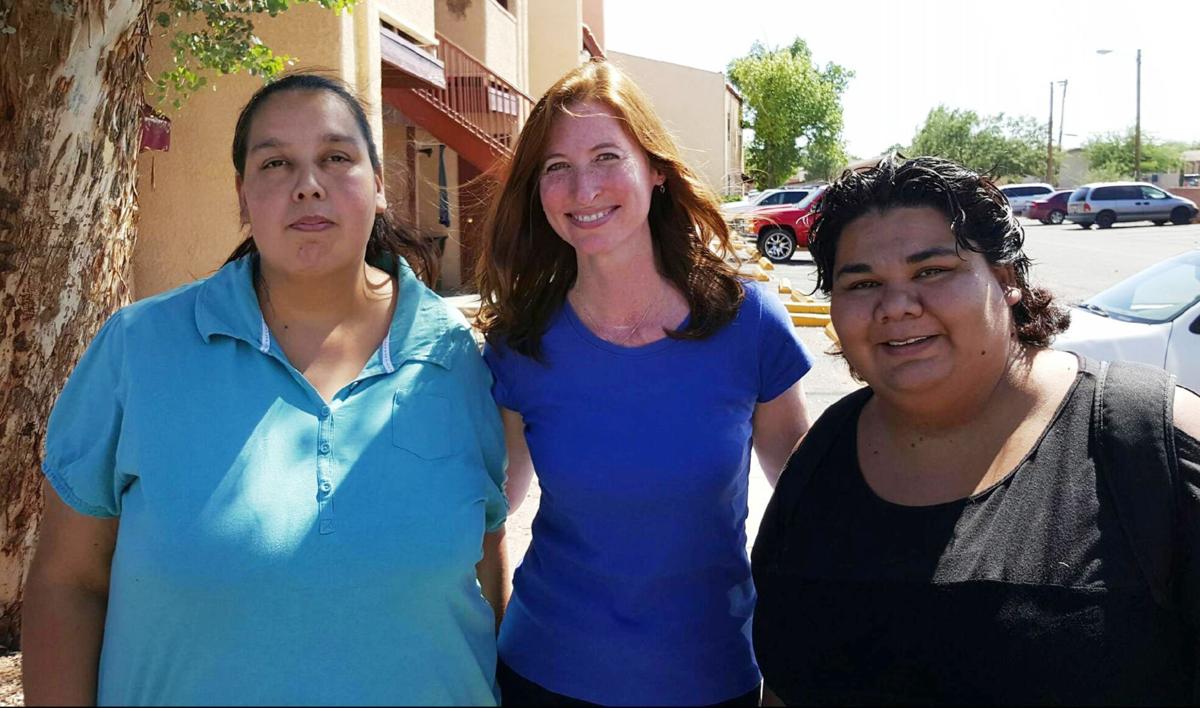 Karla Vargas, left, who pleaded guilty to one count of attempted fraud, with Cindy Cantrell and Vargas’ sister Lucianna Lopez. 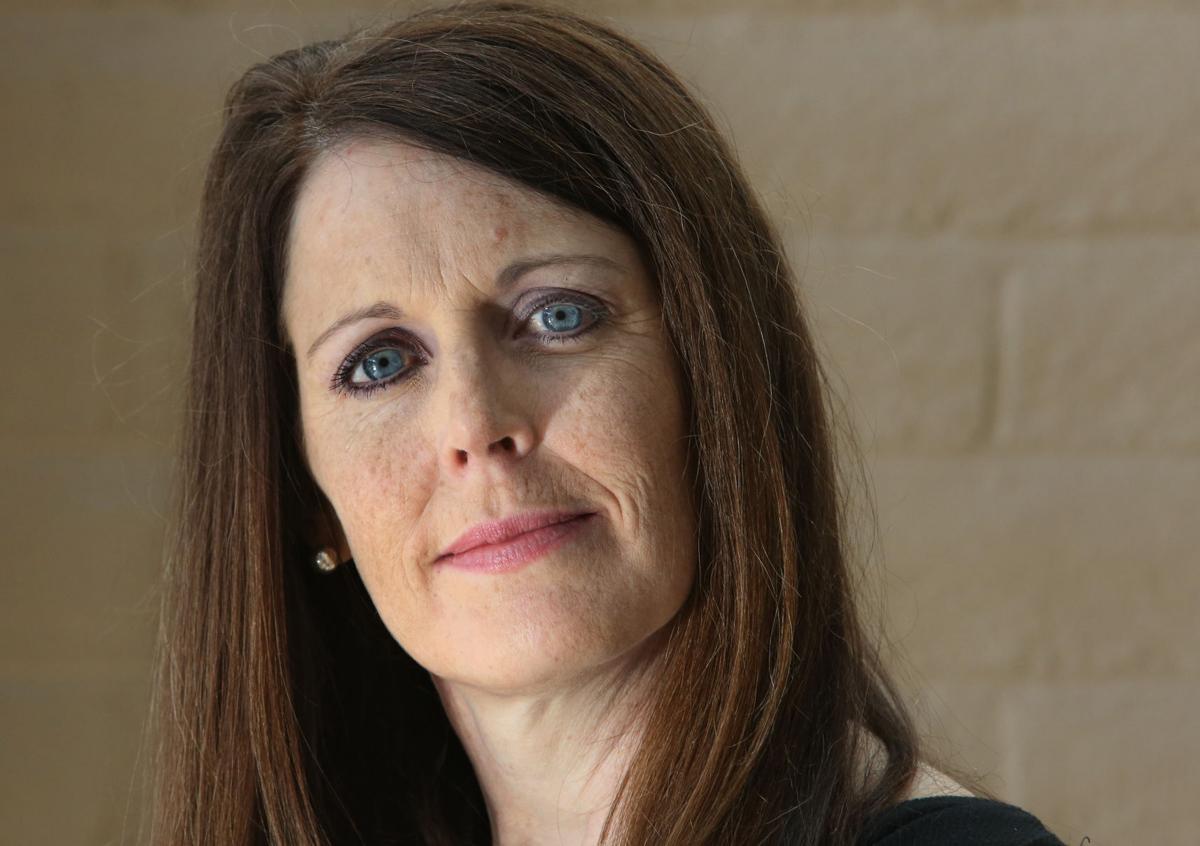 Tucson Police Department Detective Jennifer Burns investigated a fraud case in which a Boston couple were led to believe they could adopt twins from a pregnant Tucson woman.

A Boston couple longing to be parents were thrilled when a Tucson woman, pregnant with twins, saw their adoption request online and chose them.

“It seemed like a fairy tale to us that she was due at Christmas,” Cindy Cantrell said.

Cantrell, a journalist, and her husband, Jack McHugh, a contractor, first connected with Karla Vargas in July 2015 through California-based Adoption Network Law Center.

The idea of raising twins made them pause only a moment before they became enamored with the idea. They’d been through disappointments and had their hopes for adoption dashed before.

They signed the contract that month and agreed to provide monthly support to Vargas through the law center. They also paid Tucson-based Oasis Adoption Services Inc. for its services for the birth mother.

In addition to rent, the couple also paid her monthly food bills, bought her maternity clothing, set aside money for counseling she might want, and paid for her phone and bus passes.

The first: Vargas did not contact the couple as promised after she learned the babies’ genders.

She also told them her cellphone was going to be turned off, which was perplexing because Cantrell and her husband were paying the bill. And a couple of times she asked them to pay rent early because her landlord was “going on vacation.”

“It was always something,” Cantrell said. “I knew she’d had a tough life and it made me uncomfortable and sad, but I kept giving her the benefit of the doubt.”

Vargas also didn’t seem interested in meeting the couple — which Cantrell said they respected as her choice — but then suddenly changed her mind and had them come the weekend there was a pro football game in Phoenix.

Vargas and her sister, both Dallas fans, kept suggesting they all go see the game and were so focused on getting there that, to Cantrell, it seemed that was the reason they’d invited the couple out.

But there was also a tender moment that September weekend, when Vargas invited Cantrell along to an ultrasound appointment. Cantrell said when she saw the twins, she felt overcome with love and excitement.

“I thought, ‘This is real. This is happening,’” she said.

Vargas was out of touch, too, so on Nov. 29, Cantrell sent a text to her. “Is everything OK between us?” she asked.

McHugh, Cantrell’s husband, exchanged text messages the next day with Vargas’ twin sister, whom they knew as Lucy, explaining they’d been unable to get much feedback from Vargas and wondered when they should fly out to Tucson. The text exchange shows Lucy told them her sister’s doctors thought the twins would arrive Dec. 14.

Meanwhile, Oasis Adoption was trying to contact Vargas, who was so evasive the owner made some calls trying to figure out why, Cantrell said.

Soon, the couple received a conference call from the agency and the California law center: Vargas, they were told, had secretly given birth on Nov. 15, two weeks before the reassuring texts.

The twins were in a local hospital’s neonatal intensive-care unit for a couple of weeks before Vargas took them home Nov. 30. Only she and her sister knew that, records show.

Then, on Dec. 1, a text from Vargas’ phone came through to the law center, which had withheld payment when Vargas couldn’t be reached: Rent was due and funds were needed for the supposedly expectant mother.

A month later, in January 2016, Cantrell contacted the Tucson Police Department. She said she hoped an investigation would prevent other couples from being victimized.

Vargas, a 35-year-old who has had 12 children and a long history of child-welfare issues, had gone through with at least one adoption before. “That’s where we gained our hope from, and that’s where she learned the system,” Cantrell said.

Detective Jennifer Burns said it was the first time she’d heard of adoption fraud allegations in her 16 years with Tucson police, including a decade working financial crimes.

“The case started up quite a discussion,” Burns said of her unit. “We were not familiar with the laws of adoption.”

Burns and her supervisor were motivated to try to build a case by two things Cantrell reported: Vargas kept the births a secret and then tried to get money after the babies were born while pretending to still be pregnant.

Burns said that during her investigation, Vargas admitted she didn’t want to give up the twins she was carrying and kept it quiet to get money.

Vargas and her sister, Lucianna Lopez, set them up from the beginning, Burns said, by telling them Lopez was Vargas’ landlord and exaggerating by $100 per month the amount of the rent due. The couple did not know the sister “Lucy” they would later meet was the same person posing as Vargas’ landlord, police records show.

The total in rent and other living expenses paid by the couple to Vargas over the four to five months amounted to $6,014.

Vargas admitted in a December plea hearing only that she lied about the amount of rent due, said her attorney, Michelle Bowen. Vargas turned down an interview request by the Arizona Daily Star.

Vargas pleaded guilty to a Class 3 felony for attempted fraud scheme and artifice, said Benjamin Mendola, a deputy Pima County attorney. She is being held at the Pima County jail; bond is set at $11,000.

She could be ordered to spend up to 8.7 years in prison or up to five years on probation at her sentencing Tuesday before Pima County Superior Court Judge Casey McGinley.

Lopez also was indicted on charges of fraud and forgery, and her case is still pending. Her attorney, Richard Kingston, would not talk to the Star.

Catherine Braman, executive director of Oasis Adoption Services, would not comment on Vargas’ case specifically but said she has heard of only one other Arizona case in which a birth mother was prosecuted for fraud.

“There’s a lot of safeguards in place,” said Braman, who has operated her agency since 2000 and worked in adoption since 1996. “We work really hard to not let that happen.”

Yellin’s organization has reimbursed the Boston couple for the money they spent supporting Vargas.

“We have to let our clients know we may never know the whole truth about any particular individual,” Yellin said. They do records checks on any birth mother seeking adoption for her child. “If there are things like fraud or bad checks or drug issues in the past, yes, we will let them know.”

The twins — a boy and a girl — are now 14 months old, their well-being and current caregivers not a matter of public record.

Cantrell and McHugh started training to be foster parents last fall, a final attempt to adopt the twins, who were removed from Vargas’ care by Arizona’s Department of Child Safety in May.

But a short time after completing the initial steps, the couple realized how complicated and prolonged that process would be and have since entered into an adoption agreement for another baby.

While they are overjoyed to have another chance to become parents, Cantrell said it has taken a long time to recover from an experience she describes as “psychologically violent.”

Cantrell said having Detective Burns invest so much time in investigating their case “has gone a long way toward helping me heal from trauma that is still difficult to describe.”

“She listened to me, she asked how I was doing,” Cantrell said. “I expected our interactions to be very businesslike, but she reached out from a place of compassion and empathy.”

Usually, Burns said, the crimes she investigates are property crimes related to businesses or banks, situations where people are disappointed but not brokenhearted. But this case resonated with her, from one mother to another.

When she learned Cantrell and her husband were advancing toward adopting another child, she sent them gifts, all things her own children had enjoyed when they were young: a rattle, a special blanket and a Baby Einstein music player.

“It felt like a victory for them,” Burns said. “I wanted a happy ending for her. I didn’t want her to give up.”

The gifts from the detective were among the first presents they received for the adoption that’s now underway.

“We looked at her note,” Cantrell said, “and we both cried.”

Brett Karrle has overcome challenges before.

Three Points boy was born to addicted mother, left with people not approved to be his caregivers, and was failed by communication lapses in the child welfare system.

Majority of these cases involve child neglect, with parental substance abuse being the most common preventable factor.

Karla Vargas faced up to 8.7 years in prison; warned sternly by judge during hearing.

SAN FRANCISCO — Former Arizona governor Janet Napolitano has been hospitalized with complications from her cancer treatment.

Babies are part of the team at 4 Arizona government agencies

Bringing babies to work has benefits but it doesn’t work for everyone.

Karla Vargas, left, who pleaded guilty to one count of attempted fraud, with Cindy Cantrell and Vargas’ sister Lucianna Lopez.

Tucson Police Department Detective Jennifer Burns investigated a fraud case in which a Boston couple were led to believe they could adopt twins from a pregnant Tucson woman.