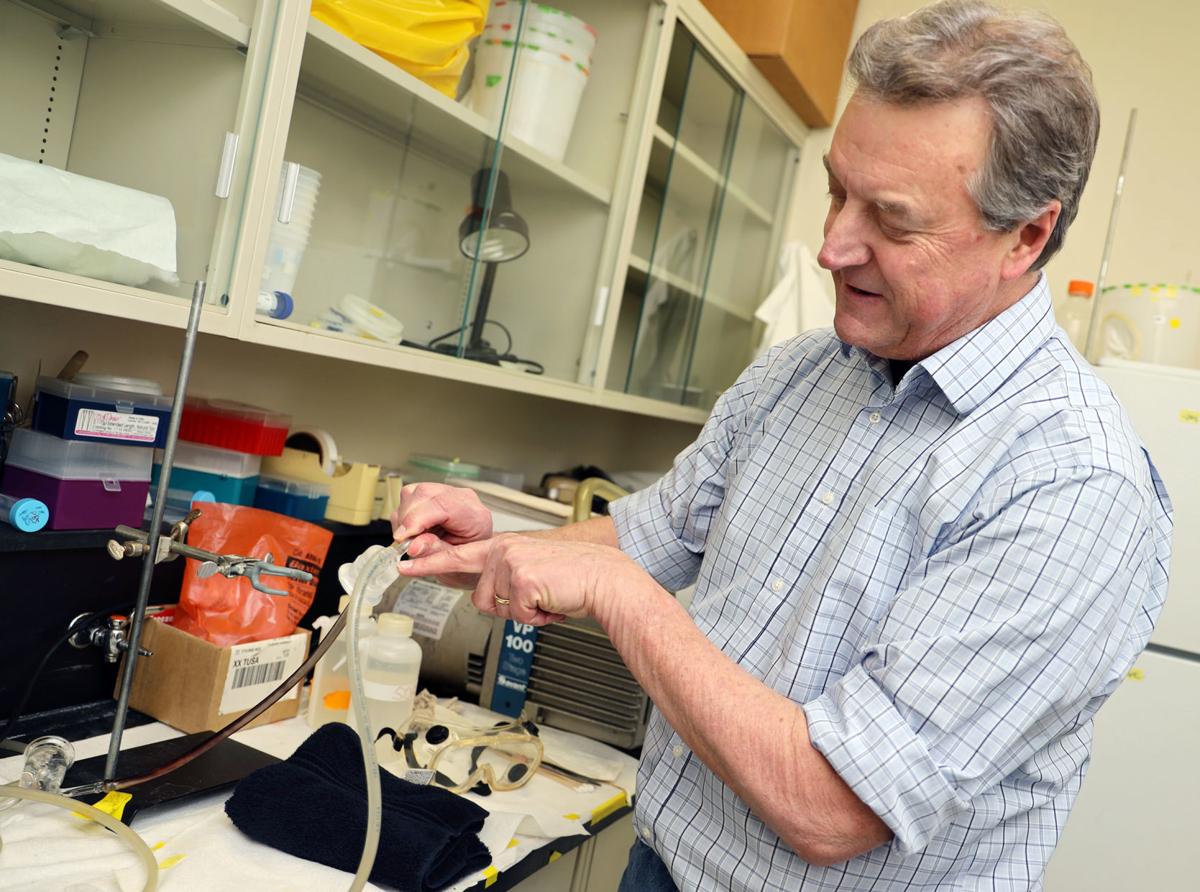 UA professor Roger L. Miesfeld explains the process for feeding research mosquitoes. A rubber bladder is filled with human blood and screen-topped containers of chilled mosquitoes are placed below the bladder. The mosquitoes are warmed and drawn to the blood. 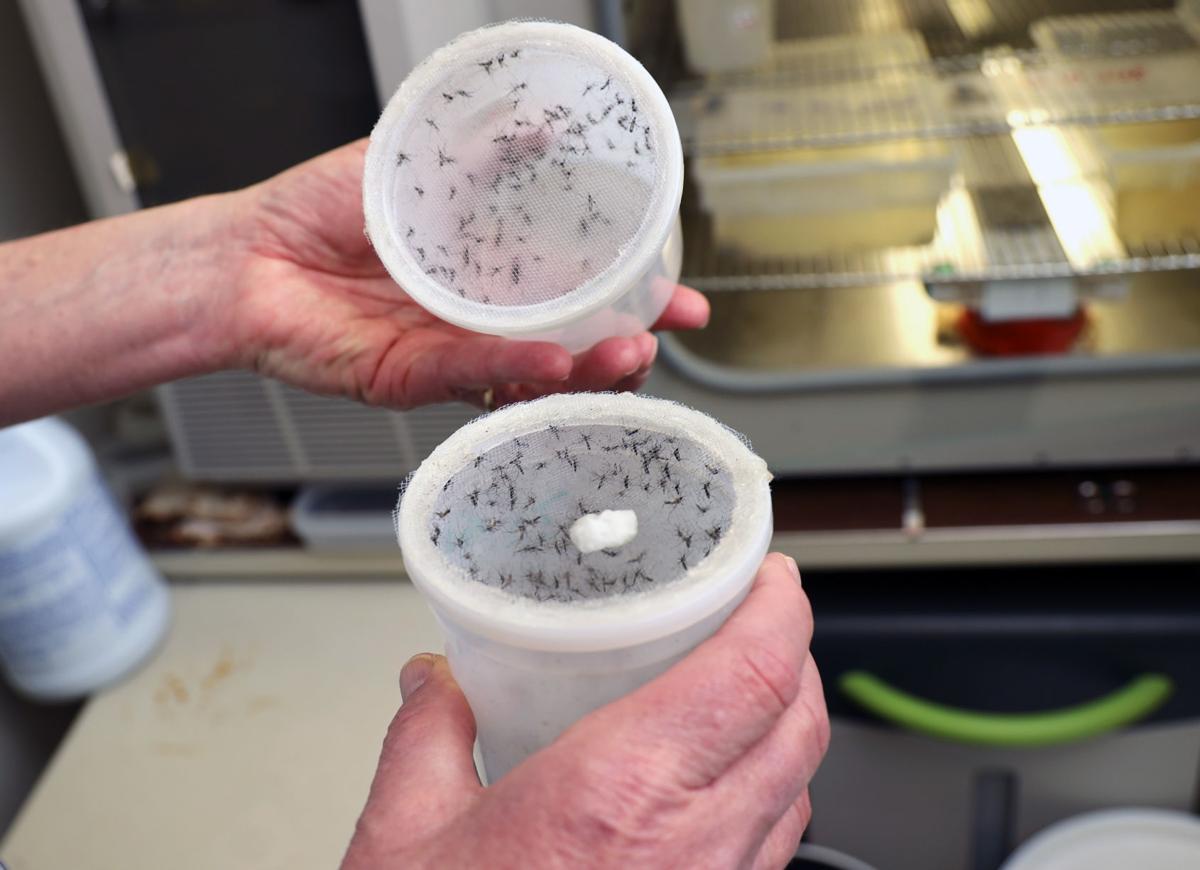 Roger Miesfeld, head of the UA’s department of chemistry and biochemistry, shows off containers of mosquitoes that have been collected for research at the University of Arizona.

Normal mosquito eggs are on the left. On the right are defective eggs laid by a mosquito that had the gene “Eggshell Organizing Factor 1” silenced through genetic manipulation.

Mosquitoes in the United States are generally considered pests and nuisances, but in other countries, they pose a far more deadly threat.

Two University of Arizona researchers have come up with a new way to fight mosquito-transmitted diseases by manipulating mosquito DNA in a way that affects the ability of the mosquitoes to produce viable eggs.

The team has been studying the mosquito species Aedes aegypti, not only because it carries Zika, dengue, yellow fever, Chikungunya and Rift Valley fever viruses and prefers to bite humans, but also because the eggs of this species have a unique trait, said Roger Miesfeld, head of the UA department of chemistry and biochemistry and a researcher on the study.

“One of the reasons why that species of mosquito is such a problem is that when she lays eggs ... the egg can last up to six months out of water,” Miesfeld said. That extreme ability means these disease-carrying mosquitoes have no trouble surviving the dry season that typically kills other species of mosquito.

“When the mosquitoes hatch in the rainy season, that’s when the disease goes back and forth and makes it worse,” Miesfeld said. “So if you decrease the mosquito population at certain times of the year, there’s less chance you’ll get bit.”

At first, the researchers were focused on the adult mosquitoes as a solution.

Jun Isoe, the study’s lead researcher, has been studying mosquitoes for more than 25 years and had previously found a gene in mosquitoes that, once regulated, would cause female mosquitoes to die after they fed because their stomachs would burst.

However, the gene was common in other organisms, meaning it would be hard to find an insecticide that targets that gene for just mosquitoes.

So Miesfeld said a different approach was tried — to first find genes in mosquitoes that couldn’t be found in any other organism.

Isoe then compared mosquitoes’ genome to tens of thousands of other animal genomes, Miesfeld said. Eventually, Isoe found 160 genes that encode for proteins that only mosquitoes have. Then, he picked 40 genes to test in the first round of experimenting.

“What we did was we knocked out each of the genes one at a time, simply fed her blood and watched to see what happened,” Miesfeld said.

For all but one of the genes, the mosquito didn’t seem to be affected by the loss. But the gene the team named “Eggshell Organizing Factor 1” had an effect on the mosquito’s eggs.

“We watched her ovaries, she was developing eggs, everything seemed fine, the blood meal was fine, and then when she laid the eggs, when they came out, the eggshell was all messed up and in some cases there was no eggshell,” Miesfeld said. “The embryos always died, it was almost 100 percent.”

Even more exciting, Miesfeld said turning off the gene once caused the same effect on all clutches of eggs that were laid, leaving them mushy and marshmallow-like.

“That suggests the protein that Jun found ... is a master regulator, perhaps a master switch,” Miesfeld said.

This is just the first step, according to Miesfeld. Now, they have a target gene to aim for, and they will start trying to find a chemical compound that affects that gene. Miesfeld said they will test millions of different chemical compounds against the protein.

“You get a hit and ... you take that compound, you modify it, go back to the mosquitoes and see if you can find a chemical that hits that protein,” Miesfeld said. “It has to be soluble, so you can spray it, it needs to go on bed nets.”

For now, Isoe will continue testing the other 120 genes to see if there might be another way to control mosquitoes. Miesfeld said their goal is not to eradicate all mosquitoes. In fact, that’s not even possible.

“We’re not trying to kill all mosquitoes. They’re actually good pollinators, and bats eat mosquitoes. Mosquitoes are always going to be around,” Miesfeld said. “But the mosquito is causing dramatic health issues for humans, because of the pathogens.”

Kathleen Walker, an assistant professor and assistant specialist in entomology at the UA, said that compared with other forms of mosquito control, the method Miesfeld’s lab is looking at is more environmentally gentle.

“Getting new techniques to respond to mosquito vector disease outbreaks will probably help protect the environment more than it will disrupt it, because the only tools we have right now are pretty ugly,” Walker said. “You pretty much have to spray something toxic.”

Further, Walker said that by targeting Aedes aegypti, native mosquito populations will be left to fill the ecological role of feeding fish with their larvae.

“A lot of our really big vector mosquitoes are these invasive species that have introduced themselves all over the world,” Walker said. “So it’s not the same kind of concern as a native species, because it’s not ‘supposed’ to be here anyway.”

Further, this kind of targeted approach would keep other organisms safe, like honeybees, unlike spraying a broad toxin like DDT, Isoe said.

“When you spray (neuro insecticides) you will kill all of the beneficial insects, the honeybees, because the nervous system is common to all of us,” Isoe said.

Targeting the reproductive system is also a new approach, Miesfeld said, which means mosquitoes won’t be resistant to it like they are to some current insecticides.

Although an insecticide is still at least five years away, Miesfeld said the goal is a commercially viable product that will help save lives and fight tropical diseases.

Team working with telecommunications company to install the generators in rural areas.

Student-run greenhouse is producing what will amount to thousands of pounds of produce each year.

Gift to the University of Arizona from the founding dean of the college will be used to hire top talent for faculty positions.

Kindergarteners through fifth-graders are helping Biosphere 2 scientists with an agrivoltaics project.

UA team aiming for Jupiter moon, with a stop in Greenland first

The University of Arizona's Lunar & Planetary Laboratory is working to put an instrument on NASA's upcoming Europa lander mission.

Warm weather in store for Tucson

After a chilly morning, Tucson should warm to the mid-70s.

Owner says the demand was too great to close up shop completely.

Irene Shivaei, a postdoctoral research associate in George Rieke’s lab at the University of Arizona, is part of the James Webb Space Telescope team.

A big part of successful long-term space missions is making sure the astronauts stay healthy.

Full of interactive displays, this experience takes a deep dive into the science of the captivating creatures and the future of Earth’s oceans.

An archaeology program at the UA lets area high school students learn about the past while creating opportunities to shape their futures.

Tuesday event is free and open to public.

UA professor Roger L. Miesfeld explains the process for feeding research mosquitoes. A rubber bladder is filled with human blood and screen-topped containers of chilled mosquitoes are placed below the bladder. The mosquitoes are warmed and drawn to the blood.

Roger Miesfeld, head of the UA’s department of chemistry and biochemistry, shows off containers of mosquitoes that have been collected for research at the University of Arizona.

Normal mosquito eggs are on the left. On the right are defective eggs laid by a mosquito that had the gene “Eggshell Organizing Factor 1” silenced through genetic manipulation. 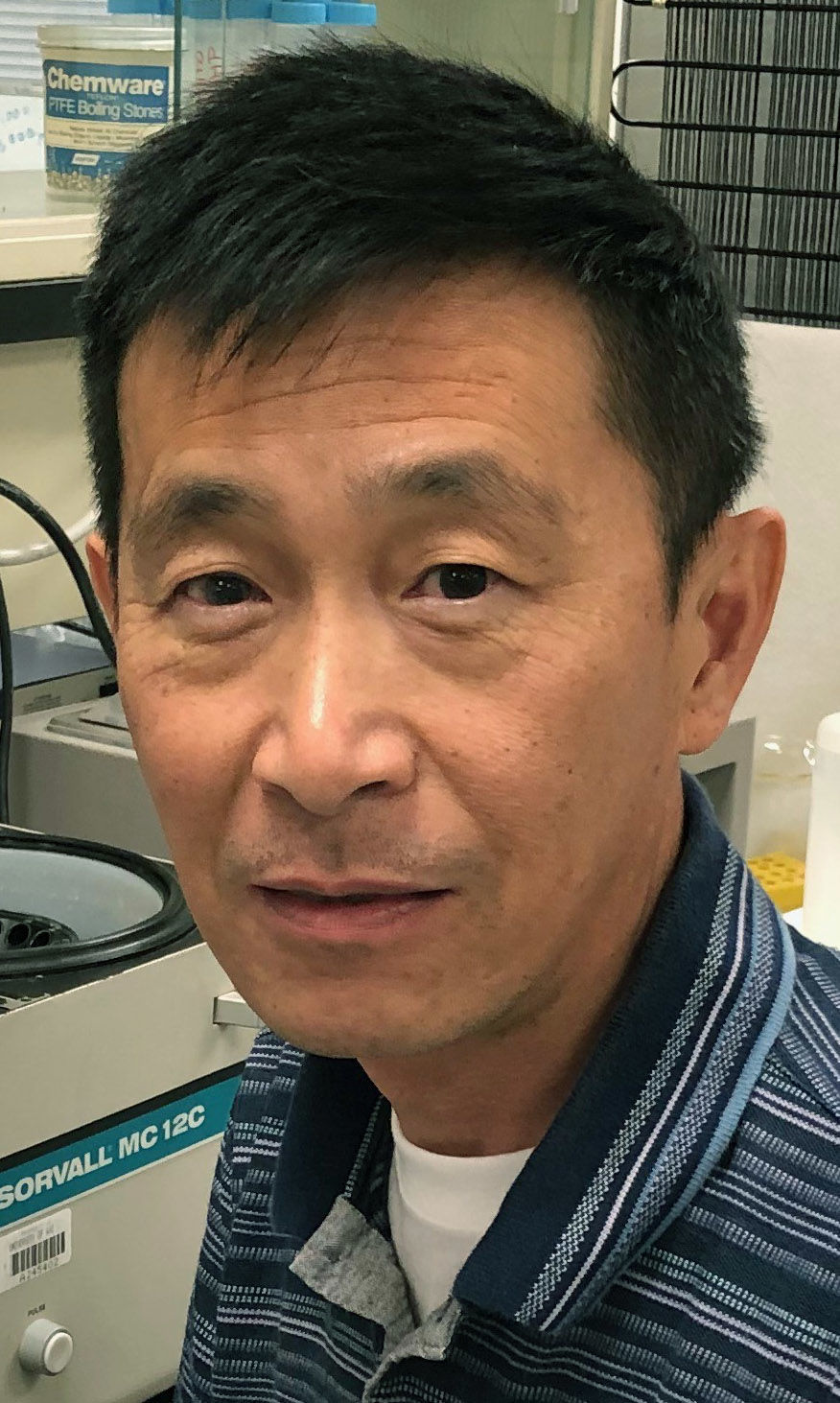