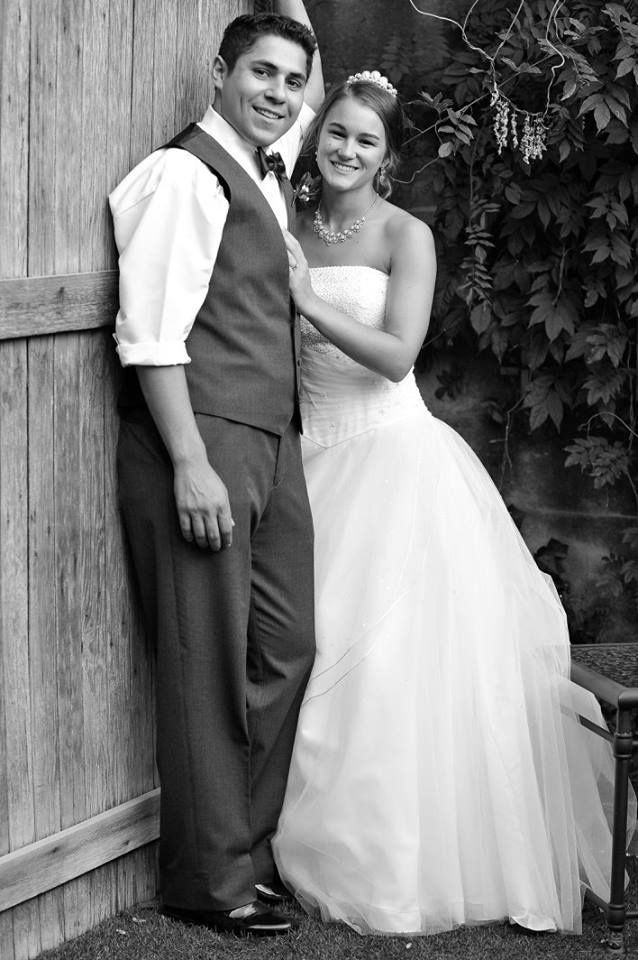 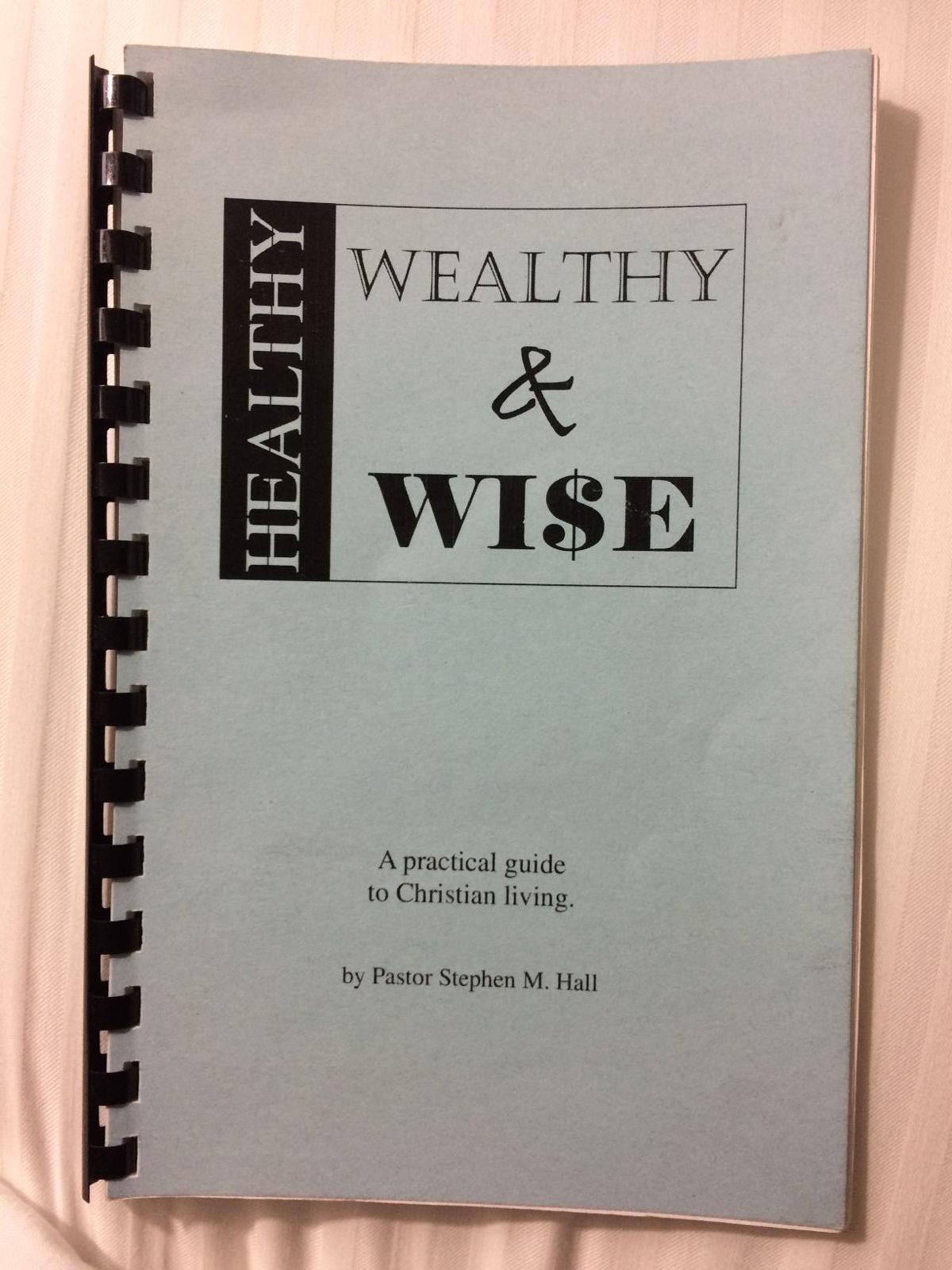 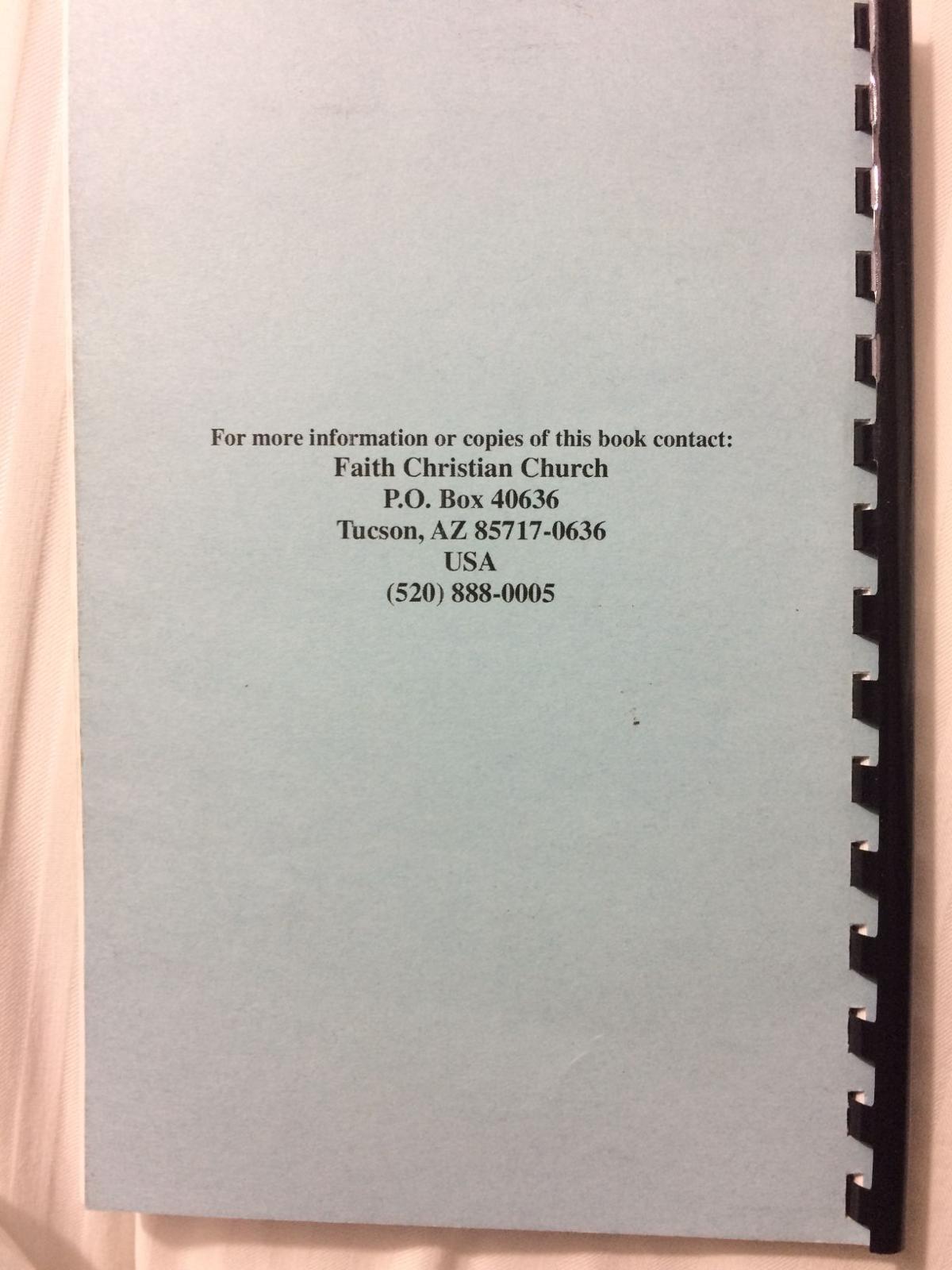 New Mexico students are told to contact the Tucson church for more information about its teachings. 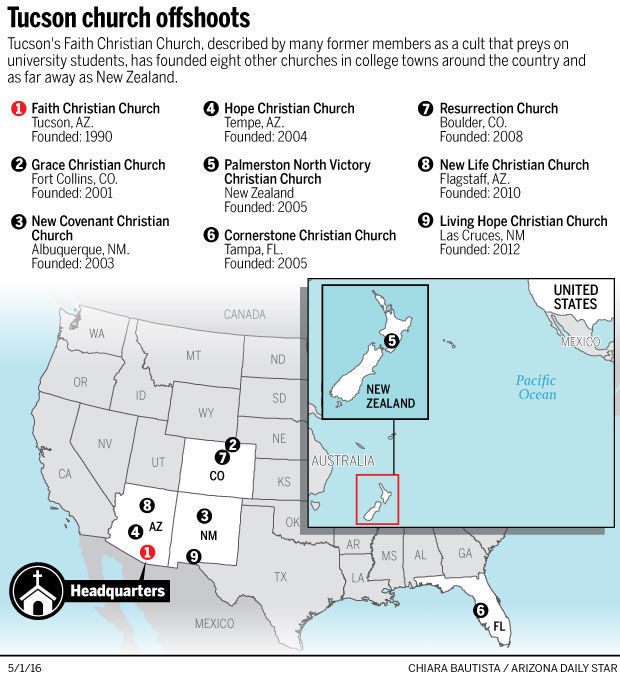 An affiliate of a Tucson church that former members describe as a cult has been banned from a university campus in New Mexico for aggressive proselytizing, misusing school property and causing distress to students.

The actions of New Covenant Christian Church in Albuquerque “have significantly negatively impacted” students at the University of New Mexico, school officials there said in recent letters ordering the church’s leaders to stay away.

New Covenant is a satellite of Faith Christian Church in Tucson, which more than 20 former members and staffers described as a cult in an Arizona Daily Star investigation last year. The Tucson church recruits on the University of Arizona campus, while the eight satellites target university students in three other states and New Zealand.

The Albuquerque church is appealing the ban, UNM officials said. Church officials did not respond to repeated Star requests for comment.

Meanwhile, at the UA, the administration did not follow through this year on a pledge to keep close tabs on three campus clubs affiliated with the church. A plan to conduct unannounced spot checks of the clubs’ activities was dropped because it was deemed unnecessary, a UA official said.

Two pastors banned at UNM — Jim Cooper and Kirk Walker — were campus ministers at the UA before the Tucson church sent them in 2003 to establish the Albuquerque site. All of the satellites were founded and are run by believers who started at the Tucson church.

UNM officials say Cooper and Walker, in their recruitment effort, gained unauthorized access to residence halls by slipping inside as others entered or left. They also are accused of misusing a student club affiliated with New Covenant to secure meeting space on campus for the church’s Sunday services.

The UNM student club, Lobos for Christ, is under “emergency” suspension, and some of its student officers are among those accusing New Covenant leaders of wrongdoing.

Most of the satellite churches follow the teachings of Faith Christian leader Stephen M. Hall of Tucson, a self-described former marijuana farmer who has no pastoral training.

Hall, 63, preaches male dominance over females and spankings of infants and children to teach them obedience, former members and employees of the Tucson church say. Pastors exert extreme control over members’ lives and finances and encourage them to cut ties with family and others outside the church, they say.

Faith Christian’s methods amount to “religious practices gone awry,” according to the UA’s University Religious Council, a group of religious entities on campus that is not part of the UA administration. Faith Christian was kicked off the council last year in response to complaints.

Hall has not responded to numerous requests for comment. The Star has sent requests by telephone, email and postal mail since February 2015.

Ex-members from Albuquerque and Tucson report similar negative experiences, although the New Mexico students don’t have children yet and couldn’t speak to the church’s parenting practices.

Many said that after leaving, they went into therapy for panic attacks, flashbacks and other symptoms of post-traumatic stress disorder.

“It’s like a bad poison. I just wish I could get it out of me,” said UNM alumnus Martín Ulloa, who ended up in marriage counseling soon after his wedding last year.

Ulloa spent six years at New Covenant, a church he joined as a lonely freshman in search of friends. Two years after leaving, he said he still struggles with extreme anxiety in the presence of authority figures.

Now 25 and a UNM employee, Ulloa said he didn’t realize how warped his thinking had become until after he got married. He said his bride, Michelle, 22, confronted him about his domineering attitude, which mirrored the church’s teachings “that it’s a man’s world and whatever the man says goes.”

“She said ‘Martín, you are being abusive,’ and it made me stop and think: Where did I learn that from? It was ingrained in me and I had to get extra counseling to unlearn it.”

Former members say New Covenant ministers — much like those at Faith Christian — give strict orders to members about how they should live, including how to spend money, whom they should date and befriend, and the proper roles for men and women.

Each member is assigned a minister, who closely watches the student’s activities and reports back to church leaders, said Kalyn Kollie, 20, a junior at UNM who left the church last summer.

“That minister knows everything about your life, everything you do, everything that’s going on,” she said. “I felt like I couldn’t breathe or use the bathroom without this girl watching me.”

Kollie said that when she left the church, she was shocked by how difficult the transition was. Her church friends stopped speaking to her. She struggled to sleep and when she did, she had nightmares that “the ministers were going to come find me.”

When she started researching the roots of the Albuquerque church, Kollie came across the Star’s 2015 investigation and realized New Covenant was an offshoot of Faith Christian in Tucson. She found a Facebook page for former members of the Tucson church and its offshoots.

In March, five UNM students who recently left the church complained to school officials about church practices. They also reported that Lobos for Christ, which is supposed to be run by students, was controlled by pastors.

“Lobos for Christ was just a front for them to reserve space with the university,” said Katherine Schweizer, 21, a UNM junior and former officer of the group. Schweizer, who left the church last year, was one of the five current students who met with UNM officials in March.

In Tucson, a similar claim arose in 2014 that Wildcats for Christ, one of the UA student clubs affiliated with Faith Christian, was being run by church leaders instead of by students. The allegation was not substantiated by UA officials.

In Albuquerque, UNM reacted swiftly. Within weeks, church leaders were barred from campus and warned they could be arrested for trespassing if they didn’t comply.

“Our investigation into this case is still ongoing, and our response to it is in line with how we work to handle all student concerns — quickly and carefully,” Jenna Crabb, UNM’s interim dean of students, said in an emailed statement.

The UA received more than 30 complaints about Faith Christian Church last year in the wake of the Star investigation. But administration officials said little could be done because most complainants were former students, and the school’s rules only cover current students. Also, they said, the UA only has jurisdiction over the church’s student clubs.

The student clubs were investigated last year and found to be problem-free. Even so, the clubs were put on “active monitoring status” for this school year, which was supposed to include unannounced spot checks at club events, UA spokesman Chris Sigurdson said at the time.

But no spot checks occurred, UA dean of students Kendal Washington White said last week. The student clubs were so cooperative that spot checks “were not deemed appropriate or necessary,” she said.

The university has not received any complaints this school year about the church or the student clubs, she said.

Faith Christian’s campus clubs include Wildcats for Christ, Native Nations in Christ and the Providence Club. Each of the clubs’ advisers is a longtime Faith Christian Church member employed by the UA.

Jeff and Lisa Phillips of Mesa, who worked for the church for 12 years in Tucson and at two of the satellites, said laying low is part of Faith Christian’s strategy for coping with controversy.

“When they get in trouble they just fly under the radar for awhile until it blows over and then go back to what they were doing,” Lisa Phillips said.

Other universities that are recruiting grounds for Faith Christian offshoots are paying closer attention to church activities on campus.

“We remain very cognizant of the church and the issues raised around it,” said Mike Hooker, spokesman for Colorado State University, where Faith Christian satellite Grace Christian Church recruits members. Hooker said the university has received complaints about the church’s activities, but none from a current student.

New Mexico State University in Las Cruces received a written complaint in March from the mother of a student involved in satellite Living Hope Christian Church and its on-campus club, Walk By Faith.

Among her concerns, the mother paraphrased what her child said church leaders told members: “If a friend calls needing a ride home after drinking too much alcohol, do not offer them a ride home. It is their sin to do such things, and you will be supporting their sin if you go to them and help.”

The university’s Dean of Students Office investigated the complaint and found Walk by Faith had not violated campus policy, a spokesman said.

But the university was not aware that Living Christ holds its Sunday services in a campus building until the Star sent a screenshot of the church’s website advertising the services.

NMSU general counsel Patrick Field said Walk By Faith reserves a campus room on Sunday mornings, but if the reservation is actually used for church services, the church should be paying rental fees. The university is looking into the situation, he said.

Arizona State University has gotten complaints about Faith Christian affiliate Hope Christian Church, but spokeswoman Herminia Rincon did not say how many nor whether they came from current students.

The university has taken no action against the church or its on-campus student club.

Kollie of UNM said she and most of her friends who left the church are in therapy.

Even with a strong support network, Kollie can’t escape the memories of New Covenant Christian Church. She is planning to transfer to another college for her senior year.

“I need a fresh start,” she said. “It’s hard to move on and be on campus, knowing the stuff is still haunting me.”

Officials at the University of New Mexico have banned two New Covenant Christian Church pastors from stepping foot on campus. The church's on-…

Controversial church is without a home

Faith Christian, called a cult by some, no longer meets at Amphi High.

Resurrection Church has been ousted from the University of Colorado Boulder's member organization for religious groups.

Tempe church with Tucson roots sanctioned for misconduct by ASU

Hope Church is led by ex-members of Faith Christian Church, which runs a ministry at the University of Arizona.

New Mexico students are told to contact the Tucson church for more information about its teachings.