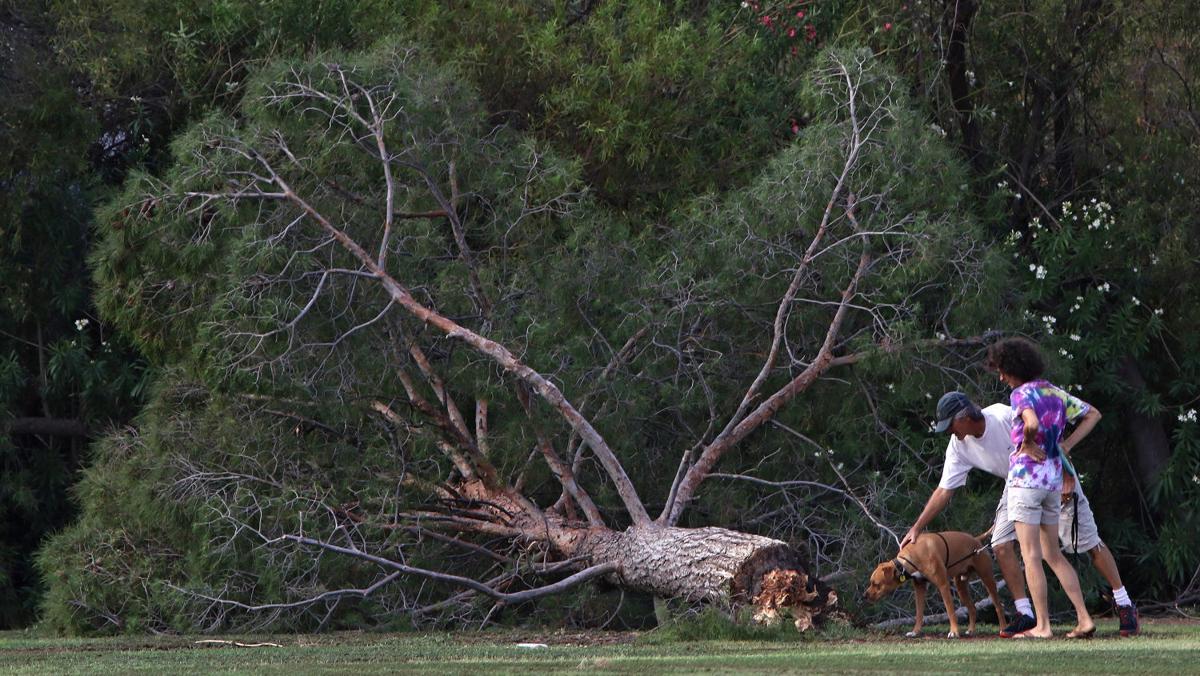 A couple and their dog examine a fallen tree at Himmel Park after Sunday evening’s storm that dropped like a bomb in the north-central area of Tucson, damaging buildings, uprooting many trees and causing power outages. See more photos on tucson.com/gallery 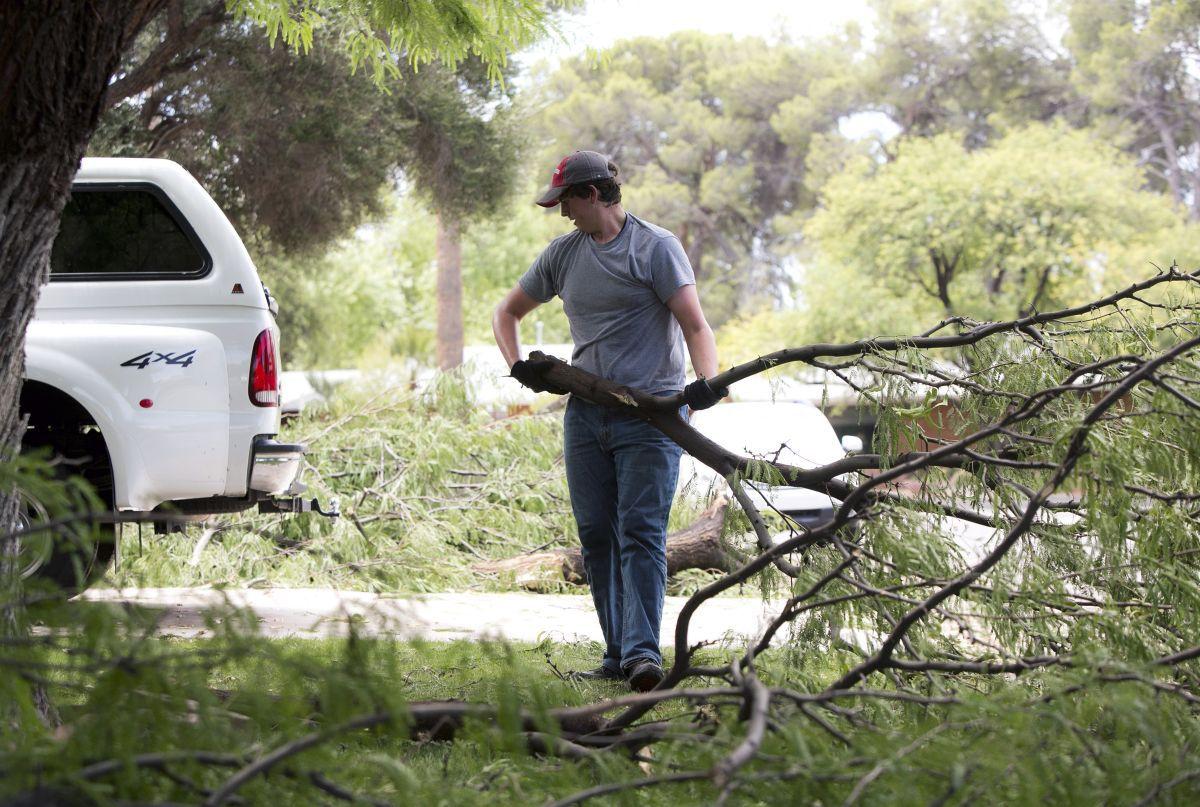 Sunday’s weather aptly demonstrated the many dangers of monsoon thunderstorms: flooded streets, a lightning-caused house fire, trees and power lines felled by downdraft winds up to 70 mph and a wildfire pushed by the outflow from nearby storm cells.

Expect more of the same every day this week.

On Sunday, a severe thunderstorm dropped like a bomb in north-central Tucson, with up to 2 inches of rain and outflow winds estimated at up to 70 mph.

Tall trees fell within the storm zone, roughly bounded on the west and east by North Campbell Avenue and North Country Club Road and on the north and south by East Roger Road and East Sixth Street.

At Himmel Park, the trees blew over southward. In Winterhaven, the uprooted trees fell toward the north, evidence of strong winds blasting from the center of the quick, powerful storm.

It came on quickly. It was sprinkling when Charlie Burton turned her station wagon onto East Prince Road from Campbell Avenue about 6:45 p.m.

Within half a mile, as she headed to her home at the north end of Tucson Boulevard, she drove into a sheet of rain that reduced her visibility to zero.

“It was black. You couldn’t see to drive.”

Stopped on the road, her vehicle was hit by tree limbs and trash barrels, some floating and some flying.

Burton was in the center of a pulse thunderstorm that had built up quickly over the area and generated a “wet microburst” — a phenomenon where the moisture in the towering thundercloud drops at once.

University of Arizona climatologist Mike Crimmins was watching the storm on radar and visually from his home east of the action. “It was impressive,” he said.

“The clouds definitely had a dark thickness to them and I was really surprised to see how quickly they went up and came down, sending this amazingly heavy and wet dollop of big drops of rain.

“From my part of town you could actually see the rain shaft and a tilt on the edges, signifying the wind spreading out in every direction.”

Ken Drozd, the hazards warning meteorologist at the National Weather Service in Tucson, estimated the wind speeds at 60 to 70 mph, based on the damage they did.

“The thunderstorms moved into the city from the southeast and tapped into some warmer air,” Drozd said. “They quickly developed vertically and then all that mass came down at once.”

At the center, rain gauges near Tucson Boulevard and East Glenn Street recorded 2 inches of rain in a storm that lasted less than half an hour.

Tucson Boulevard turned into a river and was closed for hours due to the flooding and downed power lines.

Some of Tucson Electric Power’s poles were blown over and lines were taken down by falling trees, said TEP spokesman Joseph Barrios.

At the height of the storm, 20,000 customers lost power, most in the area of the pulse thunderstorm, Barrios said. All but about 130 customers had power by Monday afternoon.

Neighborhoods east and west of the storm also received up to an inch of rain and some storm damage. Rain also fell in downtown, the Tucson Mountains and northwest of Tucson in Oro Valley and Marana.

Burton, stopped in her station wagon on Prince Road, took advantage of a short break in the storm and made it home to find a pair of 70-foot-tall eucalyptus trees had blown over, just missing her house. She checked on her dog and then went to the adjacent stables of Gentleman’s Acres.

It was havoc in the paddock for a while. She went to work with the crew already working there, digging drainage ditches and clearing the stalls of tree limbs. Her power was off until Monday morning.

Most monsoon thunderstorms are generated by pulse events, said Dan Leins, science officer with the weather service in Tucson, though most aren’t as dramatic as Sunday’s, which seemed to fit the “wet microburst” category.

The monsoon is fully in swing, said Leins. “For the rest of the week, it’s pretty much ‘rinse and repeat.’”

Get the daily forecast and severe weather alerts in your inbox!

It's official! The monsoon is here

Storms should worry you more than asteroids

Tucson-area scientists say it's important to find and characterize near-Earth asteroids, but it's not necessary to panic.

Did it rain at your house:? Tucson's monsoon is here

State seeking fines against landowner over dust storms on I-10

Officials hope an "environmental glue" will cap the farm field that's being blamed.

A number of large trees were damaged or uprooted by severe storm on Sunday evening.

Sunday's storm raised the roof of this Tucson church

Covenant Generations lost more than half of it, plus electrical equipment.

UA astronomer who led study says he expects to find four times that many during the resurrected mission of the Kepler Space Telescope.

A couple and their dog examine a fallen tree at Himmel Park after Sunday evening’s storm that dropped like a bomb in the north-central area of Tucson, damaging buildings, uprooting many trees and causing power outages. See more photos on tucson.com/gallery