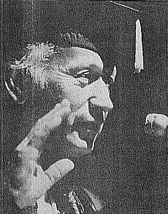 In 1970, Norman Cousins suggested a restructured United Nations might be the best way to head off the rapidly increasing destruction of the Earth’s environment. He warned a Tucson audience “Man now is smashing at the basic conditions of life … the time has come for planetary management.”

Cousins, then president and editor of Saturday Review magazine, was speaking to a combined audience of the Young Democrats of Greater Tucson and the Nucleus Club.

In an interview, he said that Tucson was in “far better shape than Phoenix, which is fast becoming one of the worst polluted cities in the U.S.” He urged Tucsonans to take action before this area was “another smog bowl.” Cousins had reason to be concerned about the quality of the southern Arizona environment, as he was building a home near Patagonia.

Cousins and his wife, Ellen, owned 400 acres near Patagonia, where they made their home. In 1972, he and renowned engineer Buckminster Fuller made plans to build geodesic domes in Flux Canyon. Each structure would be an integral unit, complete with its own energy system.

Often, he would speak at Tucson events when he was in the area. In 1972, he spoke to the Sunday Evening Forum and talked of the lack of support of the United Nations. He spoke to a Great Decisions discussion group, the Western Writers of America and the UA Law Wives Association, among others.

Following a very serious illness, Cousins became interested in the “power of positive emotions” in treating sickness. He was a strong proponent of laughter. He told the 1980 UA College of Medicine graduates “Ten minutes of belly laughter would produce two hours of pain-free sleep.”

He also talked of the paradox of scientists and doctors working to eradicate disease while governments work to perfect new forms of germ warfare.

A list of Tucson places staying open on Thanksgiving 2021