Understanding the benefits of screening

(Family Features) Not too long ago, smoking used to be everywhere. In fact, many people remember the days before there were even smoking and non-smoking sections in restaurants. People who smoked and others who didn’t mingled in the same dining room. They sat side-by-side on a plane. Some rode in the backseat of a smoke-filled car, and no one gave it a further thought.

Today, things are done differently. However, those memories can be an important indicator for those who smoked back then to advocate for their health with a lung screening.

Lung cancer has the highest mortality rate among cancers, killing men and women more than any other type. If found in its earliest stage, however, lung cancer is more likely to be successfully treated, according to the American Cancer Society. In fact, detecting lung cancer in its early stages can make the survival rate as high as 90%.

“Unfortunately, lung cancer symptoms typically don’t show up until the disease has advanced and when they do appear, they can be similar to common respiratory illnesses with cough, shortness of breath or pain in the chest, back or shoulders” said Dr. Ella Kazerooni, professor of radiology and internal medicine at the University of Michigan and chair of the American Cancer Society National Lung Cancer Roundtable. “Screening detects lung cancer when there are no symptoms. That’s why it’s important for people at high risk of lung cancer to get annual lung scans to help increase the likelihood of catching cancer early when it’s most treatable. A lung cancer screening is a painless evaluation that usually takes minutes to complete.”

However, according to a study published in the “Journal of the National Cancer Institute,”the national average of at-risk individuals getting screened is only 5%.

In 2021, the U.S. Preventive Services Task Force (USPSTF), a panel of national experts in disease prevention and evidence-based medicine, updated guidelines for who is eligible and recommended for annual lung screening. However, the Epic Health Research Network reported 87% of at-risk individuals eligible for screening based on the USPSTF guidelines didn’t receive an annual screening despite it being covered by insurance.

What is a Lung Cancer Screening? 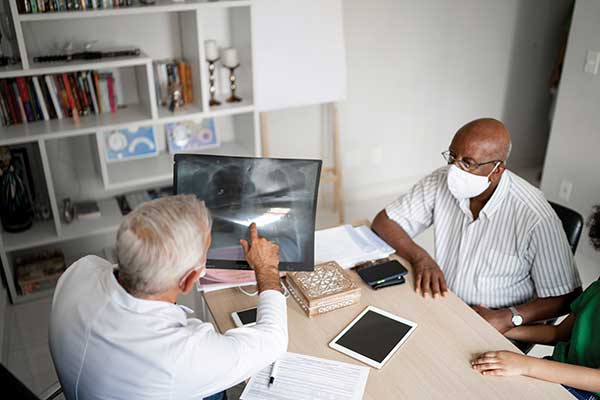 A lung cancer screening is a preventive health check, like a mammogram or colonoscopy. It checks the lungs and looks for any changes from year to year. If there’s something unusual in the lungs, a screening can help detect it at an early stage.

A low-dose computed tomography (LDCT) scan is the only method recommended for lung cancer screening in high-risk patients. A LDCT machine takes a 3D picture of the lungs. This type of scan uses 75% less radiation than a regular CT scan and doesn’t require the use of needles. Often, there are no symptoms of lung cancer. A LDCT scan can find something before patients know it’s there because the symptoms are easy to mistake or don’t appear until the cancer is well advanced.

Lung cancer can affect anyone. A family history of lung cancer, a personal history of lung disease, lifestyle or environmental factors can put a person at elevated risk. Most importantly, a person’s age and smoking habits can be an indicator of whether he or she should consider screening.

More people now qualify for yearly LDCT scans, according to the updated guidelines published by the USPSTF. The guidelines lowered the eligibility threshold based on a person’s age and smoking habits. An annual LDCT screening is recommended for people who meet this criteria:

Pack years are determined by the number of cigarette packs smoked per day by the number of years a person has smoked. For example, smoking one package per day for 20 years equals 20 pack years.

If you’re concerned about your risk, have a history of smoking and lived through the time when smoking was everywhere, don’t wait for symptoms to bring up the subject with your doctor. Talk to your health care provider to discuss the benefits and risks of screening and find out if a scan is right for you.

Learn more about how you can take control of your lung health and support loved ones who may be at high-risk for lung cancer by visiting screenyourlungs.org.

Questions to Ask Your Doctor About a Lung Cancer Screening

If you’re concerned about your risk, have a history of smoking and lived through the time when smoking was everywhere, don’t wait for symptoms to bring up the subject with your doctor. Schedule an appointment to talk to a provider and see if you qualify for a scan or could benefit from annual screenings.

Many organizations, including the American Cancer Society, recommend lung screening as an opportunity to identify lung cancer in its early stages, but screening isn’t for everyone. A low-dose computed tomography (LDCT) scan is the only method recommended for lung cancer screening in high-risk patients.

When discussing yearly lung cancer screenings with your health care provider, it may be helpful to take notes during your appointment, or you may want to have someone with you to listen and ask questions. Consider asking questions such as:

(Family Features) A new year signals a chance to renew your commitment to healthier eating, but many of the most popular diets, like the keto …

Fighting the Flu: 3 tips to protect your health

(Family Features) When most people hear about vaccines these days, the first thing that comes to mind is COVID-19. However, vaccines also help…

Check Your Skin, Save Your Life