5 tips to protect you and your dogs

(Family Features) Around the world every year, an estimated 59,000 people die from rabies following a bite or scratch from an infected dog, according to the World Health Organization; almost half of them children under 15 years old. With preventive steps, including vaccination, you can protect your human and canine family members.

In large areas of the world, rabies continues to be a serious health issue. Of the estimated 900 million dogs around the world, the majority (75-85%) are not household pets. In the countries where rabies is a continued threat and outbreaks continue, both owned and un-owned dogs may be at risk if they are not receiving rabies vaccinations.

Many areas where rabies outbreaks continue have limited access to resources and vaccines, and awareness and education about the disease are often low. Learn more about this preventable disease and how you can stop its spread with these tips from the experts at MSD Animal Health’s Afya Program. 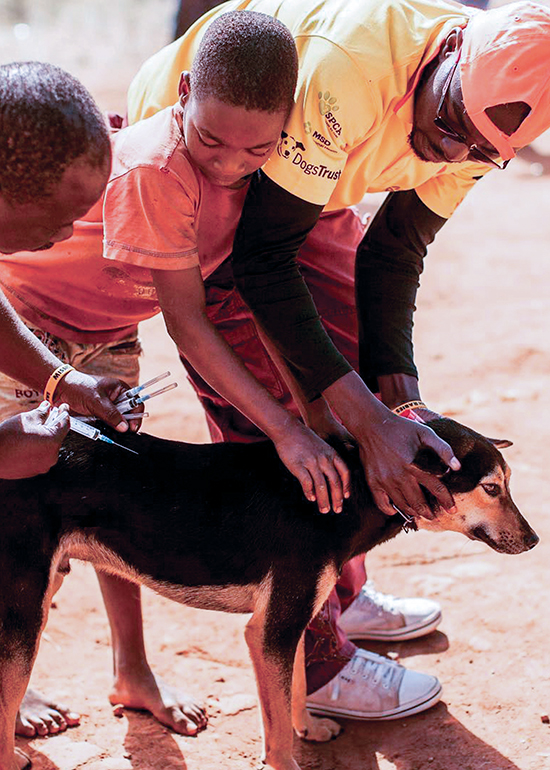 Know What Rabies Is and How It Gets Transmitted

Rabies is a viral zoonotic disease (a disease that can be passed from animals to humans) that causes fatal inflammation of the brain and spinal cord, not only in wild animals but also domestic animals and humans. The rabies virus is transmitted through the saliva of an infected animal, usually through a bite or scratch. In up to 99% of cases, domestic dogs are responsible for human rabies infections.

The time it takes to show symptoms of rabies depends on the distance the virus has to travel from the bite site to the brain. If someone gets bitten on a toe, it could take weeks or even months to show symptoms, but if bitten on the face, he or she could become rabid in just a few days.

Use Caution with Unfamiliar Dogs

Generally, it’s best to avoid approaching unfamiliar dogs. This is especially true of dogs that are sleeping, eating or caring for puppies, as they may be startled or protective if they sense a threat. If you encounter a dog you do not know, the Centers for Disease Control and Prevention cautions against running and screaming, and instead suggests avoiding direct eye contact and remaining motionless. Watch for warning behaviors from the dog such as growling, snapping, showing teeth, raised hair on its back, ears back and rigid posture.

Ensure Your Dogs are Vaccinated

Through vaccination of dogs, rabies is 100% preventable. You can do your part by ensuring your dog stays current on its rabies vaccination, which is administered by a veterinarian in either one-year or three-year doses.

If someone has been bitten or scratched by a suspected rabid dog and may have been exposed to rabies, a vaccination can be part of the treatment. However, it’s important to immediately wash the wound for 15 minutes with soap and running water. This can help remove and inactivate any virus which may have been inoculated. The post-exposure vaccination course will depend on your prior vaccination history, so you’ll need to consult your doctor or visit the emergency room for immediate medical care.

Find more information about preventing and eliminating rabies at afya.org and help raise awareness by using #ForThemForUs and sharing photos and videos of rabies prevention and elimination efforts on social media.

5 Tips to Safely Celebrate Halloween with Your Pets

(Family Features) Whether heading to a party, celebrating on social media or greeting little ghouls and goblins at home, getting the entire fa…

Flu season is here: What you need to know

(BPT) - After more than 18 months of taking precautions to help stop the spread of COVID-19, the world is slowly reopening — families and frie…

Tips to Encourage Your Child to Adopt Healthy Eating Habits

(StatePoint) While there is a lot of guidance available about what to feed children, until now, there has been little guidance about how to fe…

(Family Features) Alopecia areata is a common autoimmune condition that causes hair loss on the scalp, face and sometimes other areas of the b…