On South Fifth Avenue on the city's south side, JPMorgan has had a central role in the home market. It foreclosed on the home at left, and bought the tax lien on the house at far right. 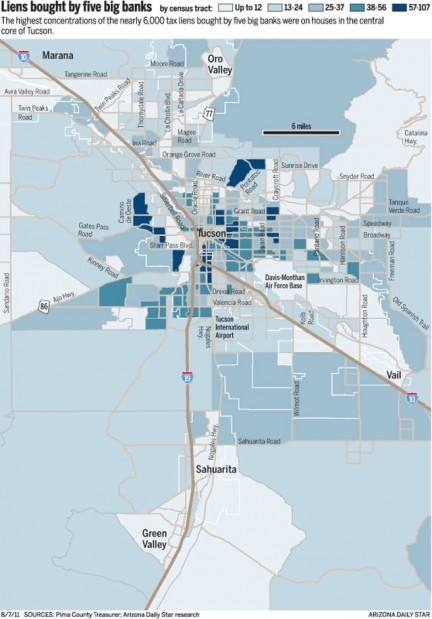 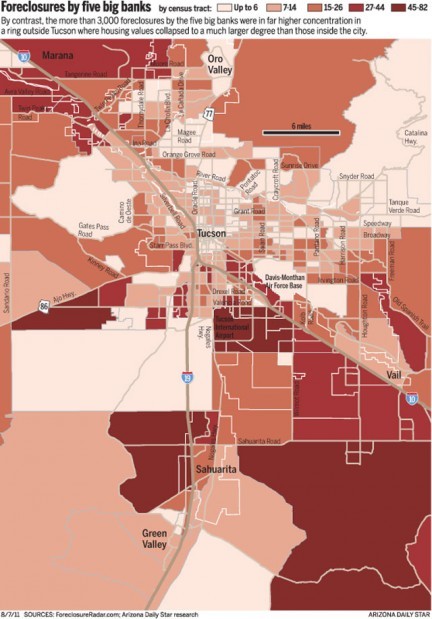 Banks that took bailout money were supposed to use part of the taxpayer-provided cash infusion to help customers avoid foreclosure, but instead, many of them are buying up struggling homeowners' tax debt.

The tax liens earn banks up to 16 percent interest, and if homeowners don't repay their debt within three years the banks can foreclose on their homes. Since the bailout in 2008, major banks have bought nearly 6,000 tax liens in Pima County that total at least $15.8 million.

Although the primary goal of the $700 billion bailout was to prop up struggling banks stung by the mortgage crisis, the government has criticized banks that took bailout money for not doing enough to help customers stay in their homes. In June, the U.S. Treasury Department withheld an estimated $24 million in combined monthly incentive payments from three - Bank of America, JPMorgan Chase and Wells Fargo - for not doing enough to help homeowners, and it could do the same for July. All three are among the biggest buyers of tax liens in Arizona.

Many banks dabbled in delinquent tax liens before the bailout, but they have ramped up their purchases many-fold since the housing market collapse and bailout money became available.

In the two years before the bailout, banks bought about $3.9 million in tax liens at Pima County's annual tax auction. At the last two auctions they bought $10.3 million. Additionally, they bought $4.1 million in liens outside the auction since the bailout.

Critic Adrian K. Hyde of AZTaxLienServices.com said banks should be using taxpayer money to help consumers, not to make big bucks at their expense.

"They got bailed out. Instead of making loans to people and businesses, they are buying liens with their own account," said Hyde, an investor who also buys tax liens, often in competition with the banks.

They already have an oversupply of foreclosures and are just looking for secure investment with a decent return, Fleishman said. Paying off someone's delinquent taxes, in return for up to 16 percent interest, and secured by a lien on the property, is a smart business move, he said.

In a tax-lien auction, participants pay off a delinquent tax bill and are allowed to charge the property owner interest on that amount. When more than one bidder is interested in a property, the one willing to accept the lowest interest rate wins. If the property owner doesn't repay the money in three years the lien-holder can foreclose or simply continue building interest.

In addition, Wells Fargo and US Bank set up private trusts for clients - likely institutional clients such as hedge funds - to buy another $5 million in tax liens here since 2009.

BankAtlantic, Bank of America and JPMorgan Chase would not comment for this story.

Wells Fargo and US Bank said they bought the liens through a trust set up with money from a third party - so they didn't actually buy the liens, don't own them, didn't make the investment decisions to purchase them and don't profit from them.

They do, however, get a fee for managing the trust, which allows their clients to securitize and sell the tax liens to other investors, similar to how banks securitized and sold mortgages during the housing boom.

JPMorgan bought $6.5 million in liens in Pima County over the past three years, while Wells Fargo bought $4.9 million, Florida-based BankAtlantic Bancorp bought $2.9 million, Bank of America bought $1.2 million and US Bank bought $200,000. US Bank also earned fees by serving as the custodian for the purchase of $6.5 million in tax-lien certificates purchased by four buyers, including Wells Fargo.

Bank purchases of tax liens have ramped up quietly.

Other bidders know banks are involved but don't know exactly who they all are, said Bill Schumacher, who has bought nearly $1 million in tax liens in Pima County since 2009.

Most of the liens are purchased through trusts or LLCs that have to be traced through paperwork to banks. Bidders at the auction don't identify who they represent.

Schumacher suspects banks really don't want people to know they are buying tax liens. If customer knew they were buying up tax liens after they took bailout money, banks could suffer a public relations hit, he said.

JPMorgan, Bank of America, US Bank and Wells Fargo repaid their bailout money in 2009. JPMorgan bought liens in Pima County before repaying the bailout.

BankAtlantic applied for bailout money but later withdrew the request.

It's hard find out what banks and institutional investors are involved, said Frank Alexander, a tax lien expert and law professor at Emory University in Atlanta.

Both Wells Fargo and US Bank set up trusts in Delaware to buy liens, taking a fee to manage the trusts, which are often formed so the big-money clients can securitize the liens and sell them off to investors.

Neither US Bank nor Wells Fargo will say who they manage the trusts for, although both contend they don't benefit from the purchase of tax liens. Brian Bartlett, head of corporate trust for Wells Fargo, said the bank won't say because it set up a private trust for the client that is a special investment vehicle that's not part of Wells Fargo balance sheet.

Because of the secrecy surrounding bank purchases, bank liens may exceed the nearly $16 million the Star has verified as coming from banks - either from direct purchases or trusts set up for clients.

The banks' strategy is to go after well-secured properties that are likely to pay off their liens, said attorney Fleishman, who represents homeowners in foreclosures. Even bidding the liens down to 6 percent, banks are still making a profit because they borrow money for less than that.

"They want the interest rate," Fleishman said. "This is free money for them."

Phoenix tax-lien attorney Mark Manoil said it's more about the interest rate than the foreclosure potential. Typically, by the third anniversary of the lien sale - when investors could start foreclosure process - about 85 percent of the liens have been paid, he said. More redeem afterward or during the court process, resulting in only about 1 percent to 3 percent being foreclosed on, he said.

Since 2009, the Pima County Treasurer's Office has issued only 58 treasurer's deeds to foreclose on homes through tax liens, out of more than 7,000 liens sold each year.

More than half of states allow tax-lien sales.

Arizona's are particularly attractive because those who buy them can earn a 16 percent interest rate - although it can be pushed lower during bidding - and if the homeowner doesn't repay the debt with interest in three years, the lien holder can foreclose. Also appealing to those who buy tax liens here is the ability to buy subsequent taxes without going back to auction.

Howard Liggett, the executive director for the National Tax Lien Association, said the benefit of tax liens for local governments is simple: "It's a way of getting the revenues they so desperately need."

County Treasurer Beth Ford agreed that lien buyers help her do her job because they put money into the county's coffers, which can then be used to provide services.

"I don't have a tax-receivable problem," Ford said. "We pick up a significant amount of delinquent taxes through tax lien holders."

He said it doesn't make sense for governments to let private investors enjoy the profit from those tax liens. If they need the money now, they could issue low-interest, short-term bonds for the amount of uncollected taxes, and then pay the bonds off as the much higher interest-rate penalties are paid by homeowners.

Twenty years ago, tax liens were bought by smaller investors, and it "really was a local operation," said Manoil, the Phoenix tax-lien attorney.

Now, though, bank purchases amount to half of all tax liens sold in Pima County in 2010 and 38 percent this year.

Banks are a force, said Hyde of AZTaxLienServices.com, who has bought $600,000 in liens since 2009. They are willing to take lower rates. They can later securitize and sell off the liens. And they can get money for less than everyone else, said Hyde.

"They have certain advantages, so they are really aggressive," he said. "They pretty much dominate these auctions."

Schumacher said because of banks' increased involvement, he no longer bothers to bid on liens for single-family homes or town homes - the money behind the banks lets them bid down the interest rate and still make a profit.

At this year's auction, held in February, several bank representatives kept calling out low bids, often pushing down interest rates to 7 percent or 6 percent, too low to be a good investment for smaller investors.

Schumacher said that's why he bids only on mobile homes and vacant land now, because the banks usually aren't looking to snap up liens on those properties.

Pima County is one of many places where banks are buying up tax liens. They have bought many more in Maricopa County and other states, like New Jersey and Florida.

In Maricopa County, banks spent at least $40.4 million at the last three tax auctions, not counting additional purchases independent of the auction.

In addition to buying tax liens themselves, banks are increasingly working with institutional clients such as hedge funds to securitize and sell off the mortgages to investors, the same way banks bundled and sold off mortgages during the housing boom.

Fortress Investment Group, for instance, teamed up with Bank of America to securitize and sell off $300 million worth of tax liens in 2010. Hyde and other tax-lien investors said Fortress is working with Wells Fargo currently. Gordon Runté, Fortress' head of investor relations, said the company does not comment on specific investments.

Alexander, the tax-lien expert from Emory University, said he was surprised that some major Wall Street players have become so active in buying liens. Even with his familiarity with tax liens, he said he wasn't aware of their level of involvement.

He said he believes the move into the tax-lien market undercuts the mortgage market and is not in the public interest.

Banks were involved in creating the mortgage crisis and took the federal government's money when they hit the wall, Alexander said.

Once they took the public's money, he said, the banks are in no position to say they no longer have to act in the public interest.

A tale of two houses

On South Fifth Avenue, JPMorgan Chase bought the tax liens on one property in 2010, while foreclosing on a homeowner just down the street a few months later.

2005: Homeowners paid off loan to JPMorgan Chase (which bought Bank One)

2011: Foreclosed on and sold at auction

Map: Liens and foreclosures, broken down by company

In the three years since banks dramatically stepped up their purchases of tax liens, the same institutions that bought liens here have foreclo…

How we got the story

After the Arizona Daily Star learned banks bailed out by taxpayers had become the main players in the purchase of tax liens, the newspaper set…

On South Fifth Avenue on the city's south side, JPMorgan has had a central role in the home market. It foreclosed on the home at left, and bought the tax lien on the house at far right.

11 things to do with lemons

Check out these Christmas lights brightening nights around the Tucson area