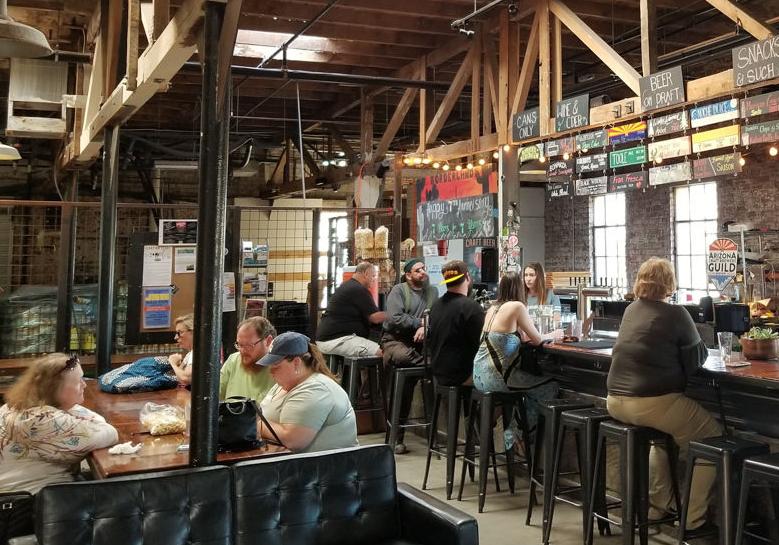 Find your "happy place" in a friendly brewery taproom

Find your "happy place" in a friendly brewery taproom

As 2019 starts to heat up, the craft brewery count in Arizona tops 100. While a majority of them are found in the larger cities, there are plenty of hidden gems across the state. I have found them in Payson, Pine, Bisbee and Camp Verde.

Flagship beers, seasonals, and crazy trends all have a story to tell of innovative styles, traditional ingredients, mysterious origins and creative brewers. I encourage you to sample courageously. Most breweries offer flights, small sample pours of 4-5 different beers. Sitting at the bar and chatting with the beertender (or maybe even the brewer) is also a great way to train your tastes and beer knowledge.

This month I will leave you with a taste of a local favorite. Tucson boasts about 20 craft breweries and several brewpubs that serve local brews. I recently discovered Borderlands Brewing Co in downtown Tucson. In their rustic industrial setting at 119 Toole Ave., Borderlands Brewing proudly offers an innovative selection of beer and wine and cider options for your companions that might not be Beer Snobs. They have a welcoming vibe with indoor and outdoor beer gardens. There are displays of local artists and iconic Tucson street art. Strongly committed to their community, Borderlands has become a gathering place for all neighbors.

On this visit, I tasted their Toole Ave, a Hazy IPA, and the Noche Dulce, a rich, dark Porter. For IPA fans, the Toole Ave is spectacular. The Hazy style has it origins in the New England IPA and differs from the in-your-face bitter hoppiness of a West Coast IPA. This selection has a gentler citrusy flavor, an unfiltered appearance, and a pulpy feel in your mouth. Toole Ave delivered perfectly.

My Noche Dulce was deep brown with a smooth chocolate finish. The coffee notes typical for a Porter were subtle without bitterness. Presenting like a dessert, Noche Dulce, translates to Sweet Night, is a perfect name for this beer.

Like many small breweries, their distribution is fairly limited. Therefore, you really need to visit their taproom in order to find their beer. The brewery/taproom/community center is well worth the trip into downtown Tucson. Borderlands does not serve food so after tasting some of their yummy selections, make your way a few blocks further into downtown or the University district and find some of the best food Tucson has to offer.

So, keep exploring and tasting. Next month we will delve deeper into the IPA style.