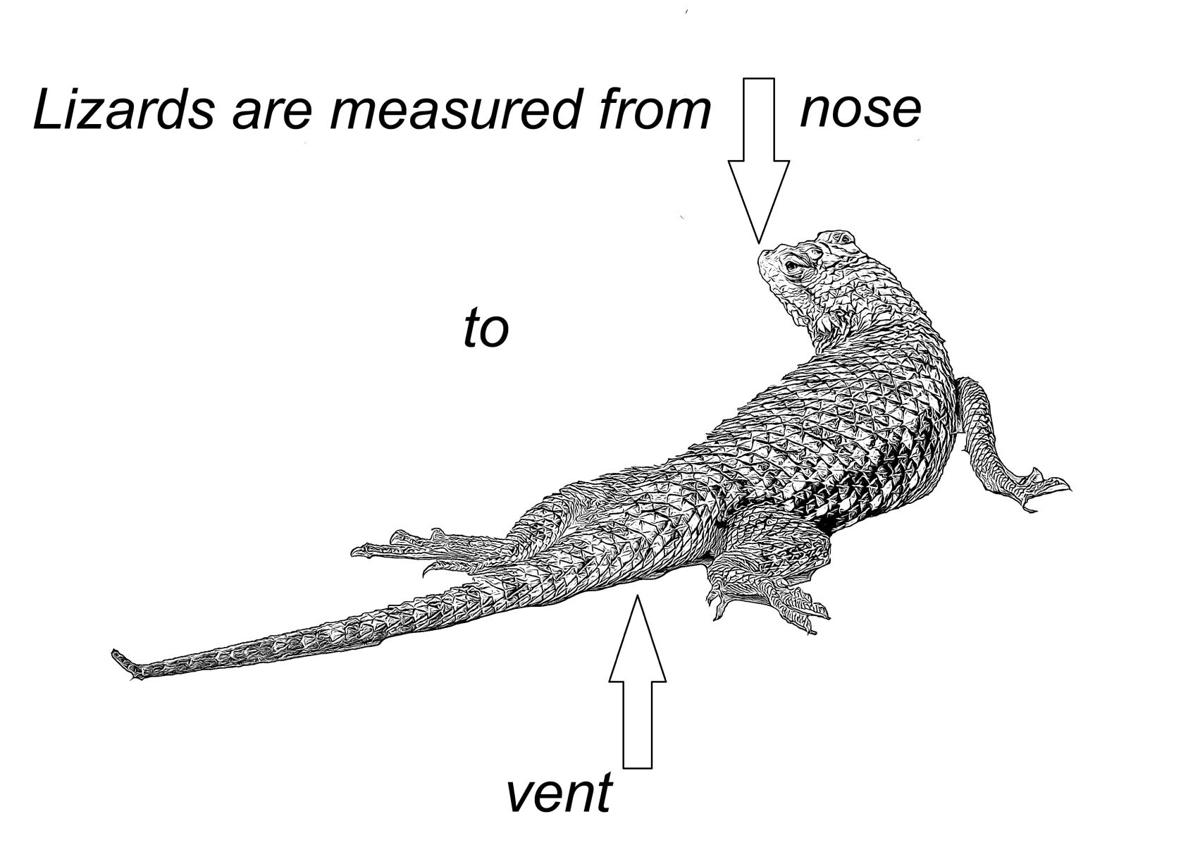 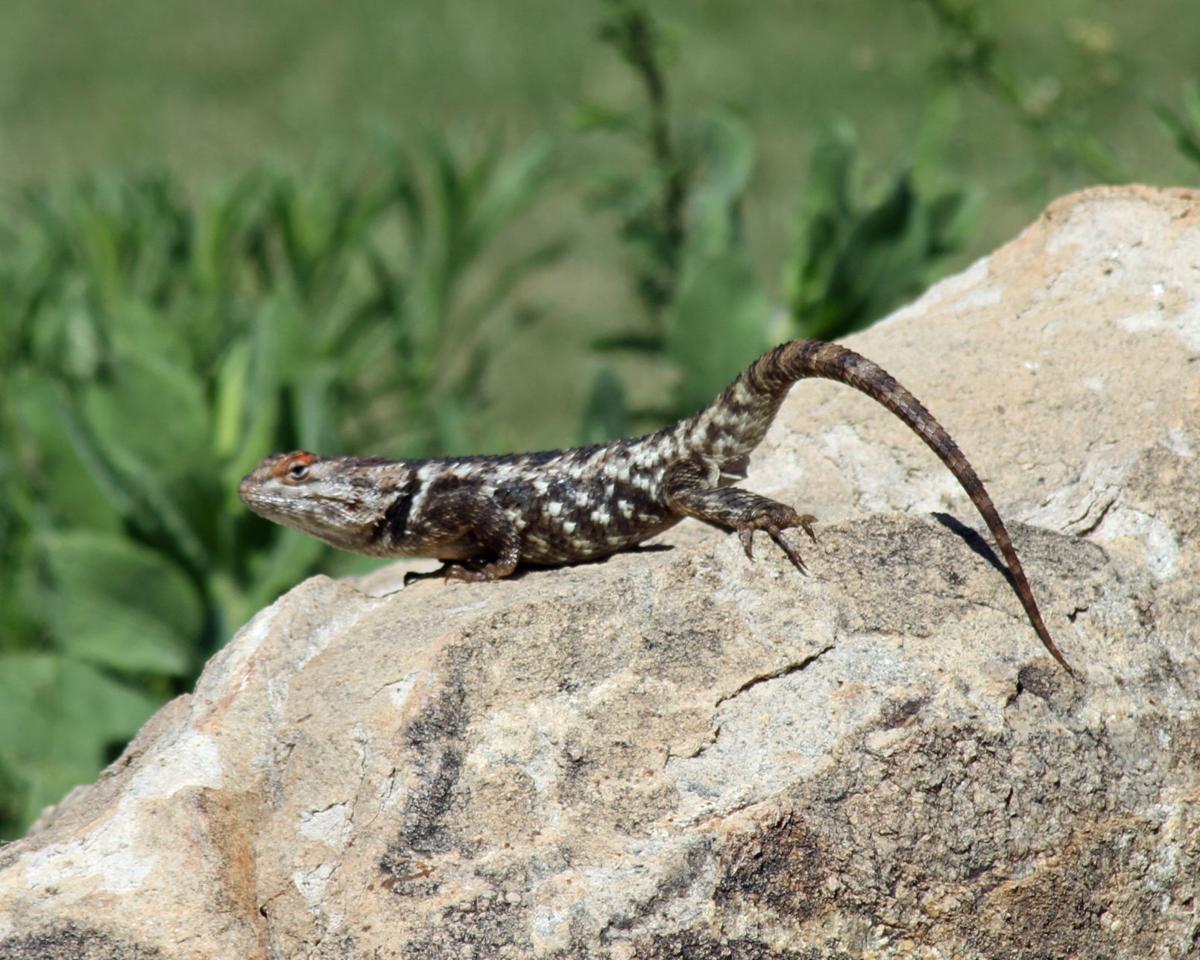 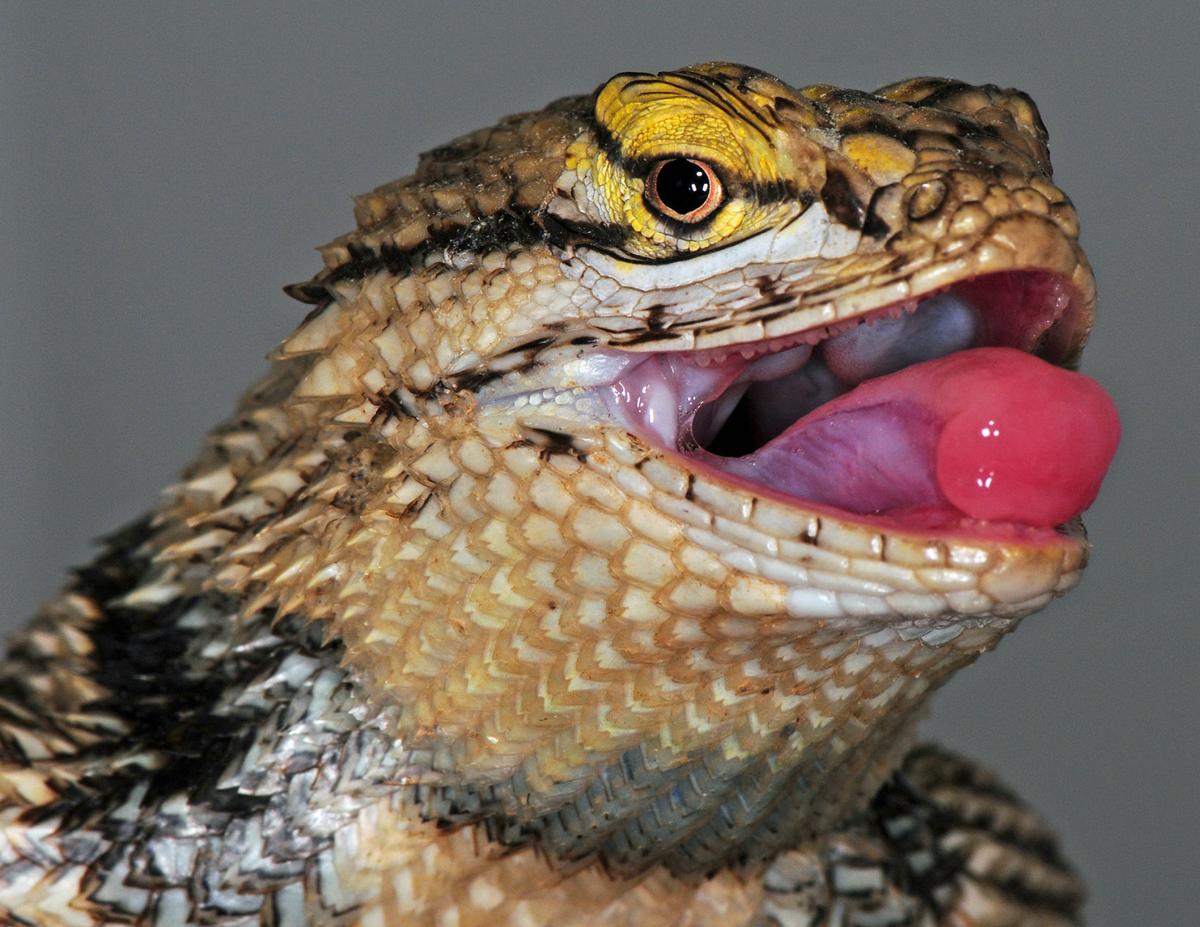 There he is every morning and afternoon from May to September patrolling the driveway and walkways in front of our house. Every once in a while he darts across the street to challenge his look alike in a neighbor's front yard. When this occurs the two lizards take positions next to each other, bodies parallel, and then sizing up one another with sidelong glances they start doing “push-ups” (which is their territorial display). Eventually they take off in opposite directions. Apparently neither one feels superior enough to press the issue.

This is the Desert Spiny lizard. These are medium to large lizards with snout-vent lengths ranging from 2¼ to 5¼ inches. Spiny lizards have keeled, pointed scales. Background color is usually subdued gray, tan or blue with a striking wide, purple stripe down the back and single yellow scales scattered on the sides (S. magister), or scattered turquoise scales mixed with tan and brown on the back and sides (S. clarkii). Both species have a dark collar under or around the neck; males have vivid blue throats and under-bellies. Females develop orange to red heads during the breeding season.

Spiny lizards exhibit metachromatism, that is they adjust their internal temperature by changing color so they are darker during cool times, which allows them to absorb more heat from the sun, and become lighter during warm times so they reflect more solar radiation. The desert spiny lizard also uses camouflage so it is not so easily seen by predators such as roadrunners and snakes.

Usually, during the morning hours, it will be out basking in the sun on rocks or any hard surface that is in direct sunlight, but like many desert reptiles, it will seek shelter, usually underground in burrows or any suitable cover that provides shade, during the hottest part of the day in the summertime. They hibernate in late fall and during the cold months of winter before re-emerging in spring.

Of course they are not venomous but should you try to pick them up they have a powerful pinching bite that can leave you with a blood blister. When encountered it is often heard before it is seen as it scratches and claws the bark en route to the opposite side of the trunk or branch. It flees down into the inner tangles of pack rat nests, rock crevices, or burrows when threatened.

I mentioned pest control. The Desert Spiny Lizard feeds on a variety of insects including ants, beetles and caterpillars. It also feeds on spiders, centipedes, small lizards and some plant material.

They are often encountered in male-female pairs. Mating takes place in spring and summer and one or two clutches of eggs are laid in spring and summer. Clutch size ranges from 2 to 12 eggs. Hatchlings may appear as early as late May but usually begin to emerge in July.

To read more of Jim's articles, go to saddlebagnotes.com