Skip to main content
You have permission to edit this article.
Edit
Home
E-Newspaper
Letters to the Editor
Events Calendar
Billboard & Classified Ads
Recipes
Current Advertisers
Submissions
Advertise with Us
About SaddleBag Notes
Share This
1 of 5 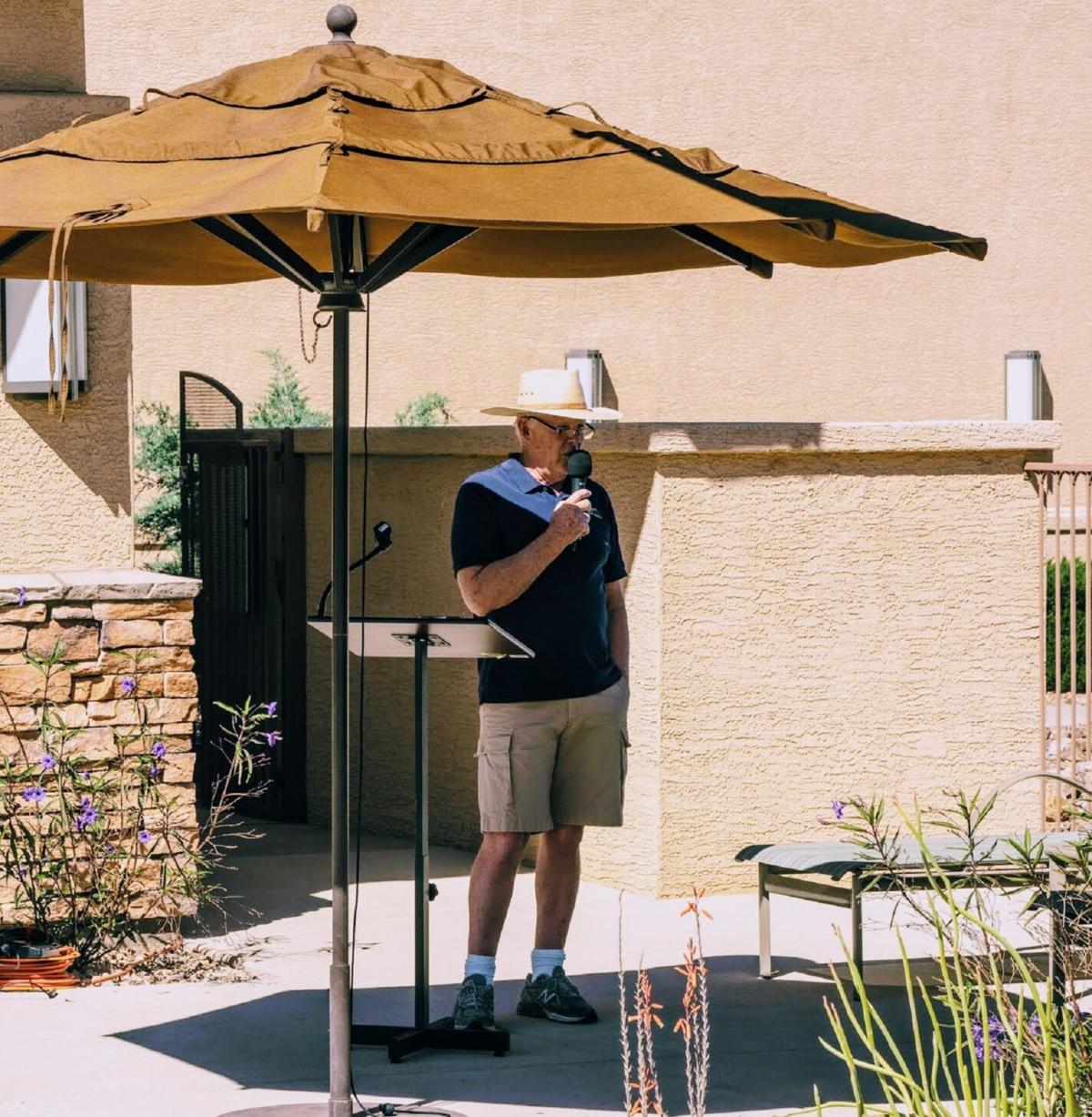 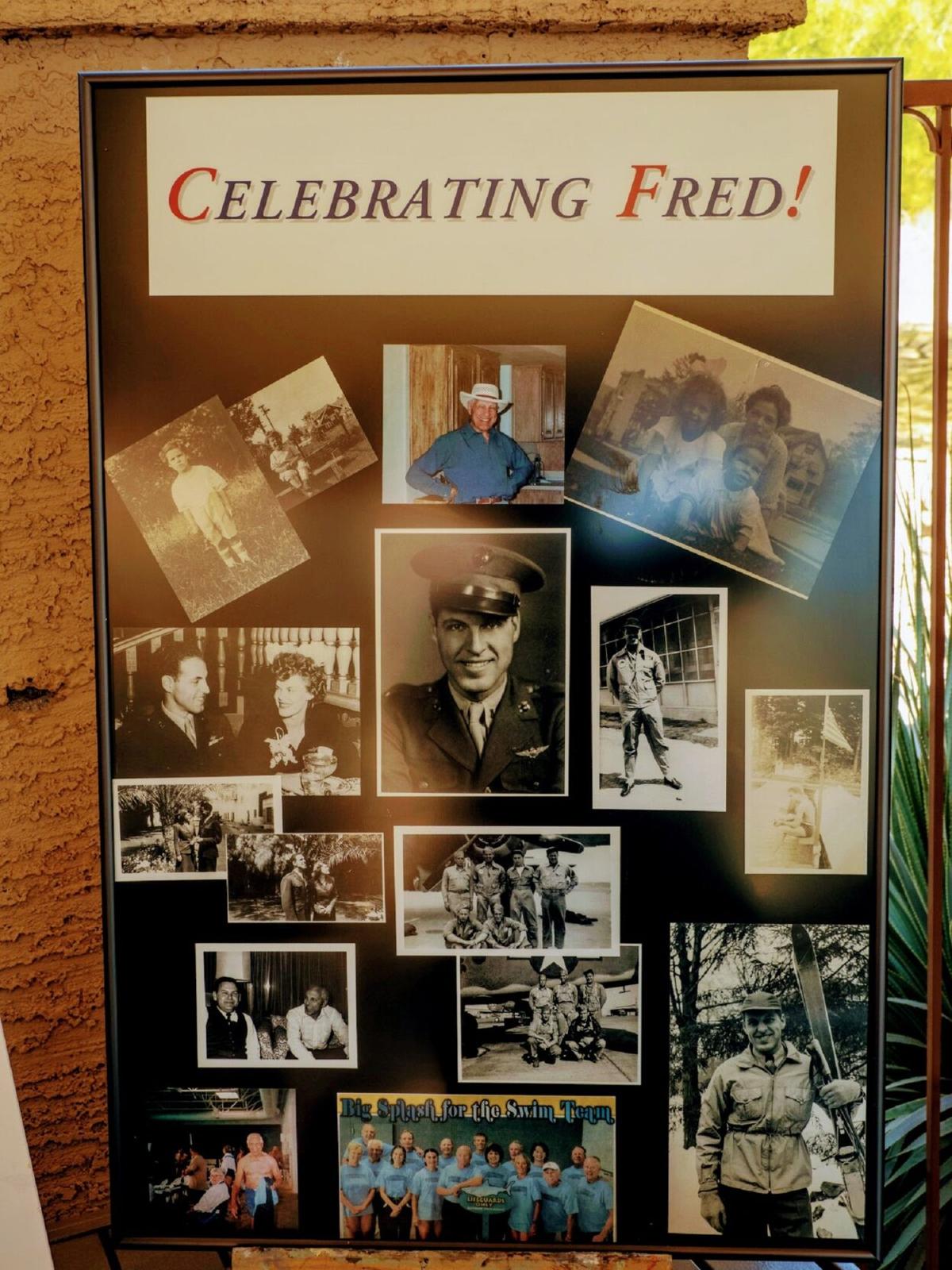 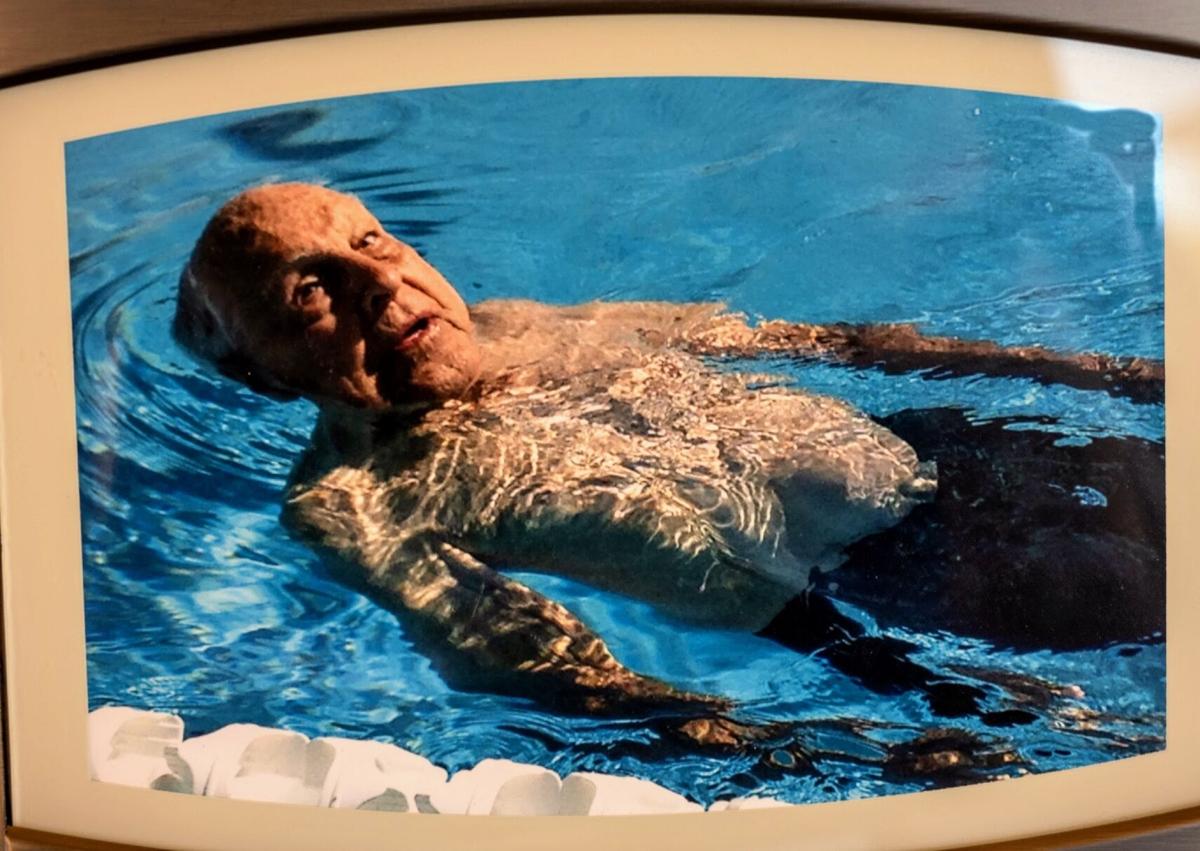 Fred Klein in one of his Favorite Places. 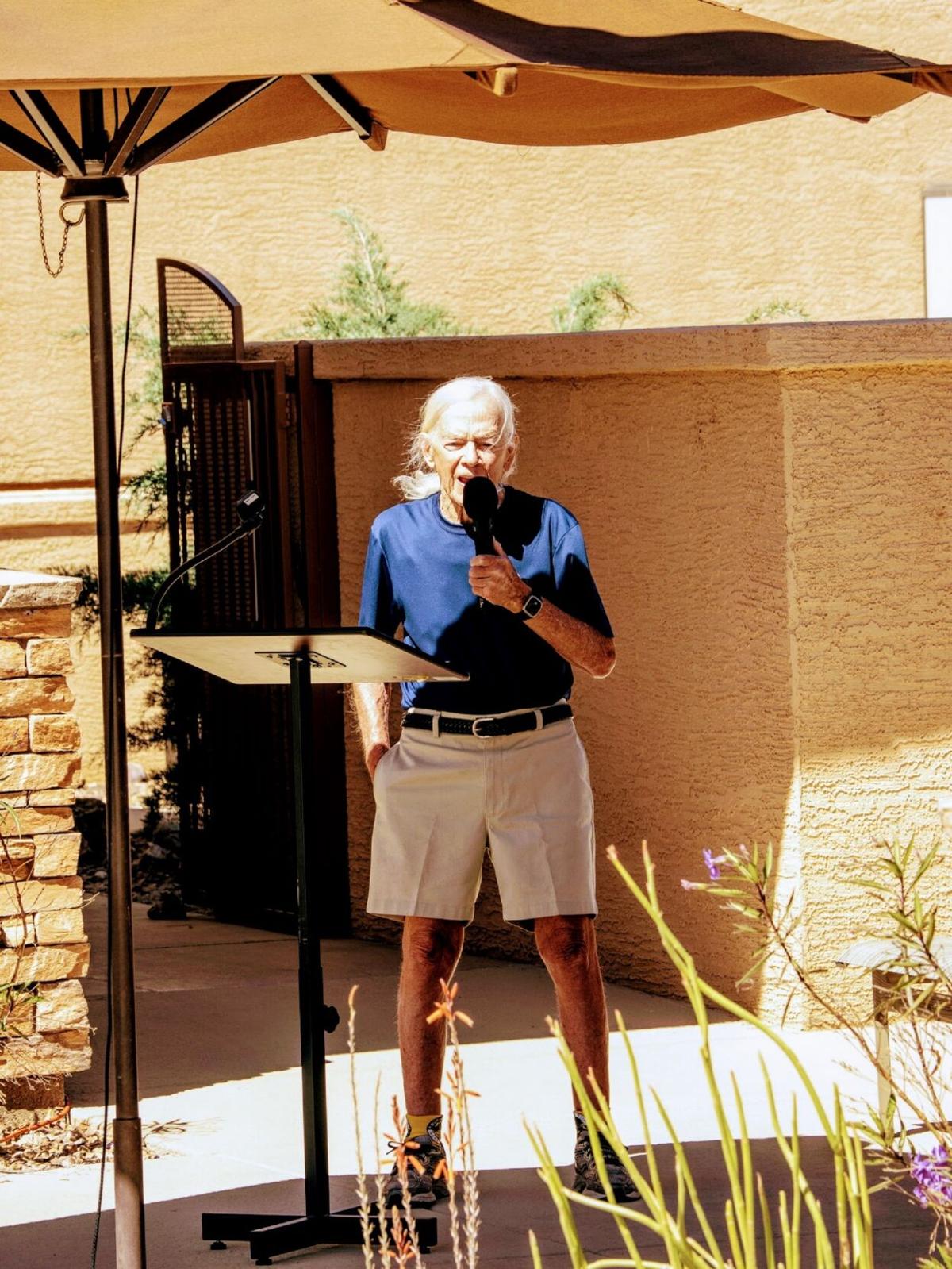 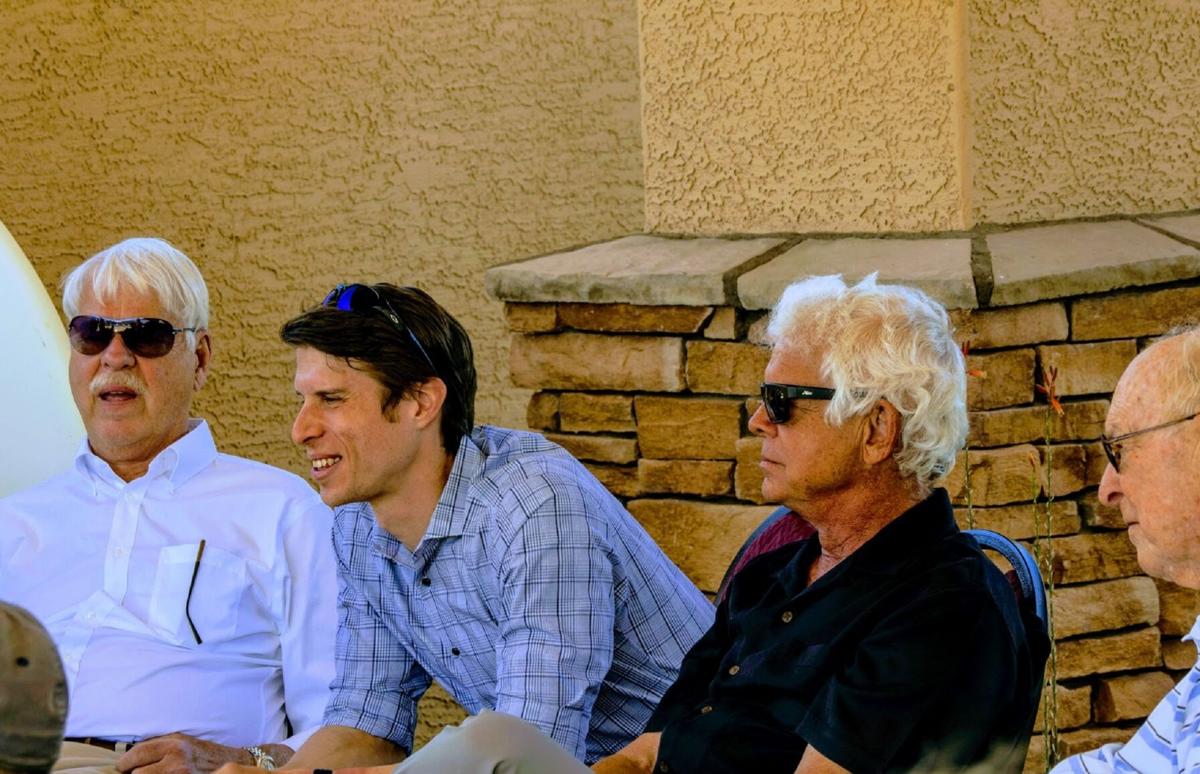 Fred Klein in one of his Favorite Places.

Sunday, April 25, would have been SaddleBrooke Swim Club's oldest member Fred Klein's 105th birthday! Coach Doug Springer was hoping that Fred could once again set new swim competition records as he entered a new age group! Sadly, Fred passed away last July. Due to the pandemic, the Memorial was postponed but appropriately scheduled as a "Celebration of Life" on the day Fred would have been 105-years old.

Former SaddleBrooke Swim Club Coach, Doug Springer, welcomed the group composed of Swim Club members, friends and Fred’s family (consisting of son, Steve of Scottsdale, Arizona; son, Fred and his wife, Pru of Park City, Utah and grandson, Christian of Seattle, Washington) in the perfect setting for Fred's celebration, the DesertView Pool, where Fred trained for competitions and enjoyed the camaraderie of the Swim Club members whom he referred to as the "greatest group of people!" Doug thanked Kim Carlson and Shelly Sheehan for the outstanding display of Fred's memorabilia of photographs, medals, ribbons, accolades, letters of commendation, appreciation, celebration, congratulations, newspaper articles, etc.

Fred's son, Steve, stated that his Dad referred to his years in SaddleBrooke as the HAPPIEST of his life... mainly due to the good people, here, who had such good hearts and did so much for him. Fred was the first in the family to go to college (Dartmouth), he also worked in carpet manufacturing and did not have to go to war but joined the Marine Corps because he wanted to serve and he wanted to fly. Fred flew the B-25 Mitchell for 63 successful missions during the war for which he received the Distinguished Flying Cross.

Fred's grandson, Christian, an Internal Medicine resident physician in Seattle (of whom Fred was so proud) commented on the fact that Fred lived LONGER than a CENTURY. Christian stated what many had heard Fred continuously say when queried about how he made it this far: Good parents, Lucky and the Quality of FRIENDS!

Close friend and a fellow World War II Veteran, Paul Gaurnier spoke of their long friendship here in SaddleBrooke and talked about how Fred, a Marine Corps officer and pilot, met his wife Patt who was a Private in the Marine Corps. Although military guidelines frowned upon officer and enlisted personnel fraternization, Fred determinedly pursued Patt and they married after his tour of duty in the Pacific. They were married for 70-years until Patt's death in 2016. After Patt's death, Fred was extremely lonely, so, Paul, Doug Springer, Phil Simpson, Paul Swane, George Sallaberry, Jack and Jill Fritz became part of the "Lunch Bunch" meeting for lunch and visiting Fred regularly. Doug said when they would go to the Clubhouse for lunch, it was like a scene out of "Cheers" where everyone knew Fred's name!

Karin Bivens related how she once spotted Fred swimming laps, introduced herself, complimented him on his swimming and suggested he join the Swim Club to which he replied, "Do you know how old I am?"... I'm going to be "90!" She replied, "Fantastic! You definitely have to join! You'll be the oldest one on our team, the only one in your age group, you'll win everything you enter— and our coach is going to LOVE you! Plus, you'll inspire others who think they're too old to be active. Join he did, swim he did, win he did and inspire he did!" Every time he saw Karin after that, he would point to her and say, "You're the one who got me into this MESS!"

When Fred could no longer drive, Susan Gerhard became not only his driver but a very special friend. Learning how much Fred loved flying, she organized a trip to a WWII aircraft exhibition in Scottsdale and by special arrangement, Fred was allowed to take over the controls of a P-51 Mustang during flight. Fred had another opportunity to fly... this time in a B-25 Mitchell at Mesa Airport arranged by close friend George Sallaberry.

Doug recalled the special Parade organized for Fred's 104th Birthday last year led by a Golder Ranch Fire Engine. Fred was seated in his driveway but stood up and saluted as the fire engine passed by. The fire fighters saluted back! Over 200 people drove past in decorated golf carts and vehicles wishing Fred a Happy 104th Birthday, waving, cheering and dropping off cards.

Elaine Stamm who became Fred's lady friend and loyal companion talked about seeing Fred "through the fireplace" when they both were having lunch at the Clubhouse. Elaine had also lost her spouse. Someone on the staff mentioned that there was a gentleman having lunch who was 100 years old. Elaine could see him through the fireplace, thought he looked lonely and talked to him. Fred responded by inviting Elaine to see his house! Elaine wasn't too sure about that and questioned the bartender if he thought this would be okay. He did and so Elaine followed Fred home and they talked and talked. He showed her his winning medals, ribbons, photos and they bonded instantly. They became a "couple" spending time together especially evenings enjoying each other's company, watching TV, doing things together but still maintained separate households.

Others shared stories of Fred, like his love for speed and fast cars (Jim Oswald). Phil Simpson talked about Fred and how he would use his cane to "wake up his uncooperative foot!" and how people love to help someone with a cane. That special cane was handmade by Fred's friend, Paul Swane (aka "Tall Paul"). When Fred would leave Phil's car after returning from sharing lunch, he would say, "Phil, it's been a pleasure." He would then walk toward his garage, his cane in his right hand and without turning back, raise his left arm, as if to say, "See you later."

So, to Fred, with our left arms raised, "See you later!"