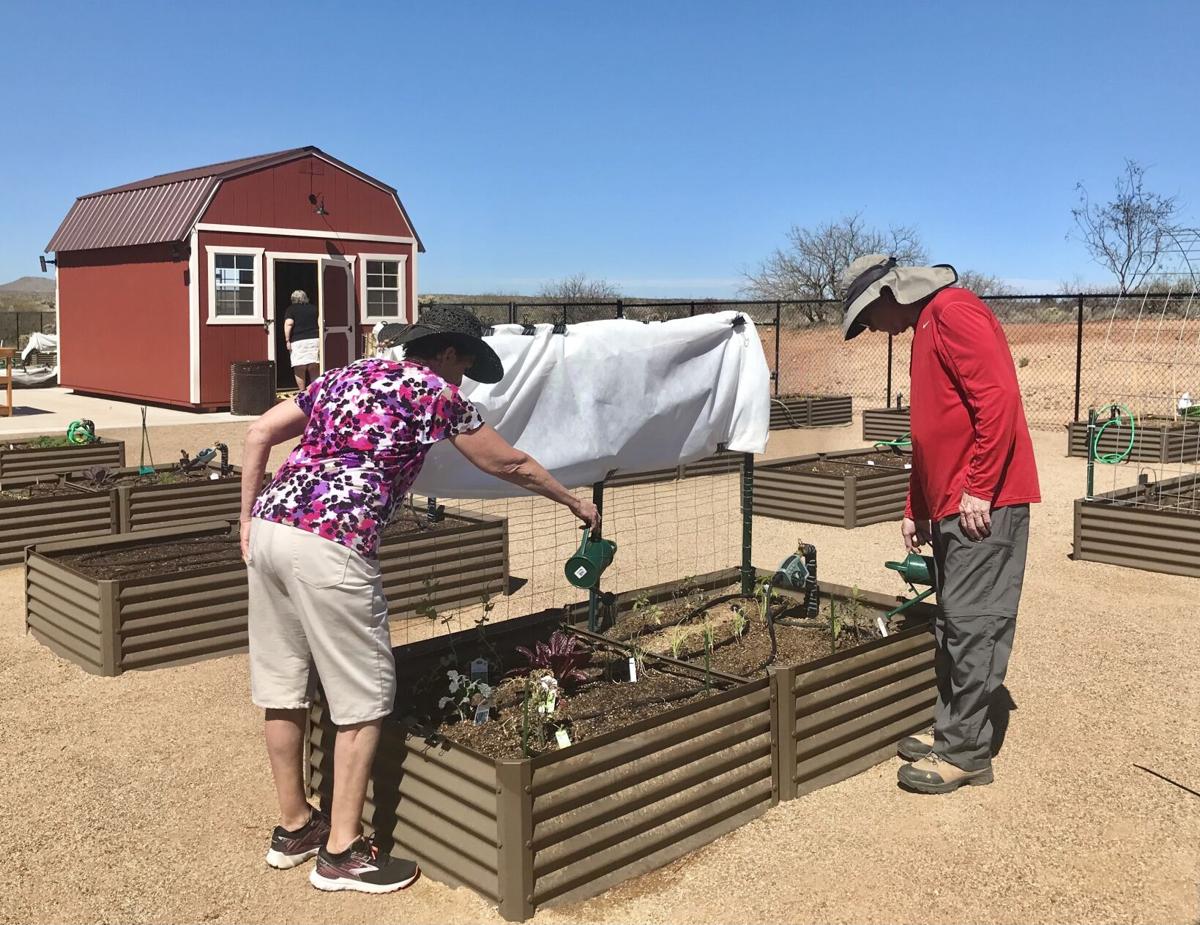 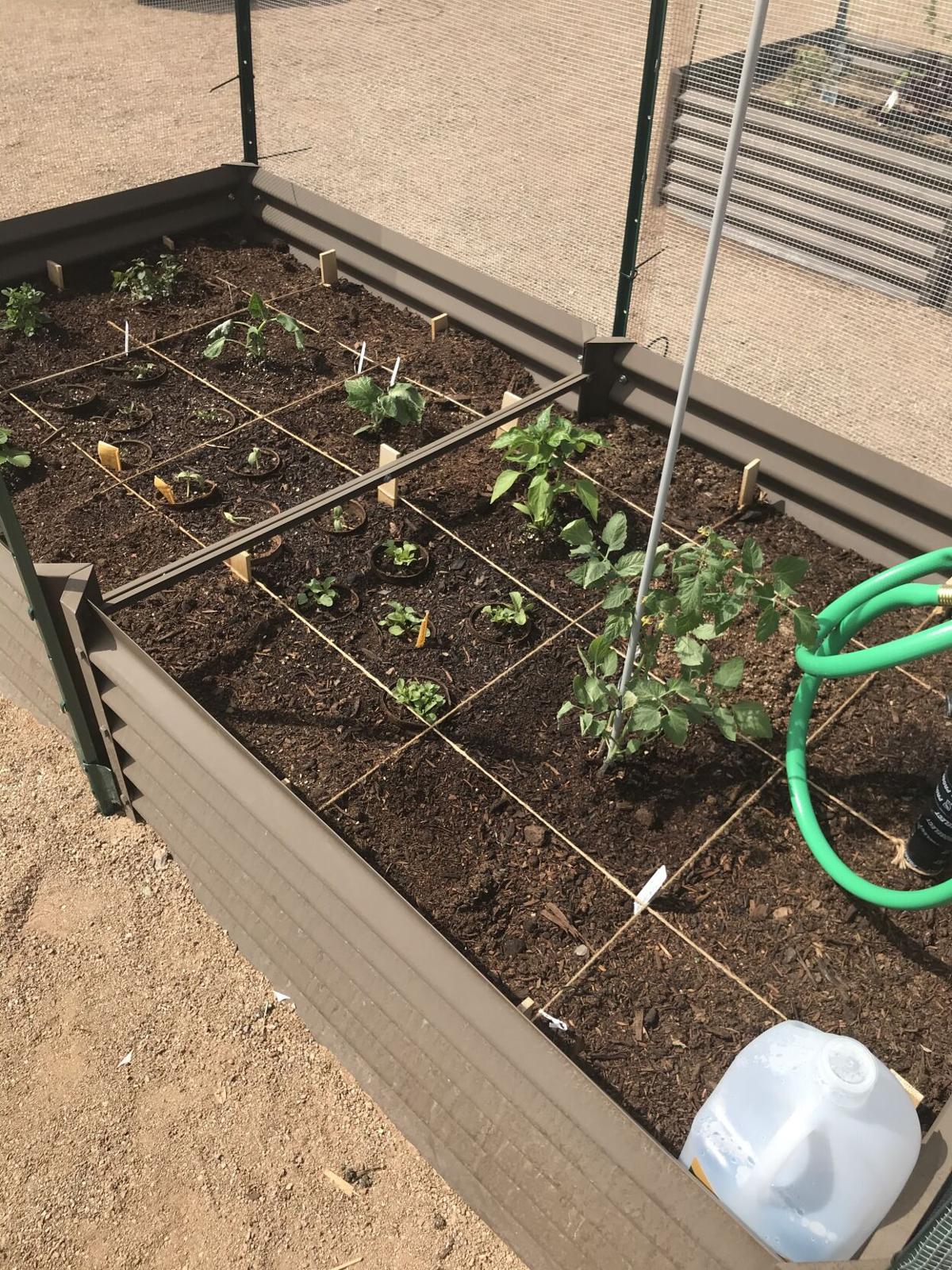 If you have walked the nature trail at SaddleBrooke Ranch in the past few months, you have likely seen a barren plot of land transform into a fenced collection of raised beds, a shaded area with tables and benches, potting tables and an oversized shed on the property. The Community Garden opened in mid-February and since then, has leased two-thirds of the plots available to SaddleBrooke Ranch residents. Seeds have begun to sprout, plants have begun to grow and garden boxes have taken on personalities with trellises, colorful totems, vegetables and herbs.

Like many residents who have come here following their busy careers, Judy and Bill Henderson never had the time to garden while working in California. In a move to Idaho, they decided to dig in and raised vegetables in their backyard garden. “Bill built two raised garden beds and we grew lettuce, tomatoes, kale, onions, sugar snap peas and bell peppers,” Judy recalls. “To our surprise we were successful and had all the veggies we could eat.”

Bo Jessop signed up for his box as soon as he could. He learned to garden from his Dad when he was growing up in Michigan and his interest has never waned. This year, he is experimenting with seeds. “I put seeds in wet paper towels and put them in baggies and set them in the sun for about a week and actually watched them germinate. Now they are beginning to pop through the soil” he says with a smile.

For some Ranch gardeners, it took more of a nudge to reel them in. Corrine Glesne’s neighbor across the street, Lenore, asked her to share a box. They’ve each planted lettuce, Lenore planted starter plants, Corrine began with seeds. “We’ve lost some tomato plants and peppers with these late frosts, but we’ll try again,” says Corrine.

While Corrine and Lenore are hoping to harvest crisp, green salads from their shared garden, Bo feels his garden is a solid win for him. “It’s already a success for me. It’s a great experience to watch things grow. I’m hoping to get some produce to share with others.”

On a recent Saturday morning, a few SaddleBrooke Ranch Master Gardeners were at the Garden to greet other gardeners and answer questions for those wanting to learn more about planting in the desert. Throughout the morning, others borrowed garden water meters to see if their plants were getting enough or too much water, some lingered to share favorite spots to buy plants with fellow gardeners, and others sipped hot coffee and got to know their neighbors. The Hendersons mentioned other benefits of planting in the Community Garden. “We enjoyed our Idaho garden so felt we should give it a try at the Ranch. We also felt it was an opportunity to meet some really interesting and fun individuals. If we harvest as many friends as we do veggies, we'll consider our garden a success.”

The community Garden is located in Unit 4C at the end of Egret Trail. Box rentals are $50 a year and limited to one SaddleBrooke Ranch resident per household. This is to give everyone who is interested a chance to participate. Complete and submit the SBR Garden Space Agreement via email to alex.baker@robson.com

SaddleBrooke/SaddleBrooke Ranch Master Gardeners are volunteers trained under the auspices of the University of Arizona, Cooperative Extension, Pinal County. We offer educational programs and classes to residents of our communities.

Need advice or have questions about your own garden? Send an email to planthelp@arizona.edu and include your name, address, phone number and photos of your issues.