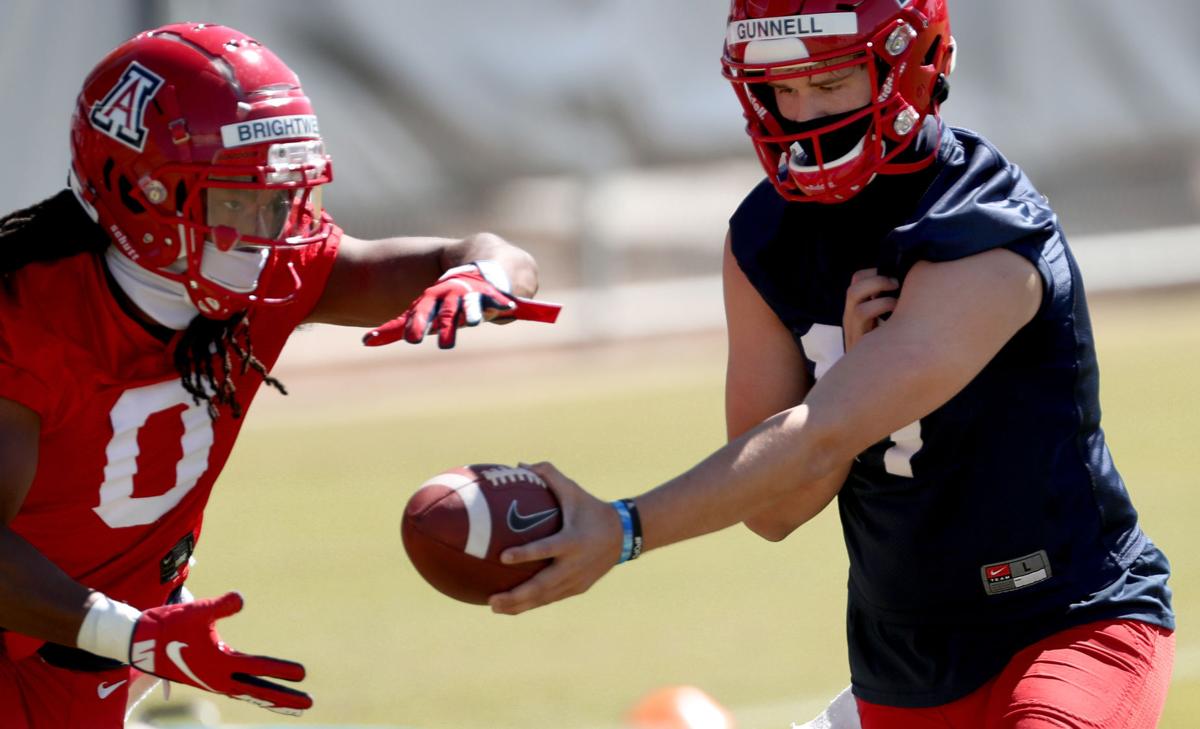 Gary Brightwell, left, has 157 rushing attempts for 915 yards over the past two seasons while backing up current NFL player J.J. Taylor. 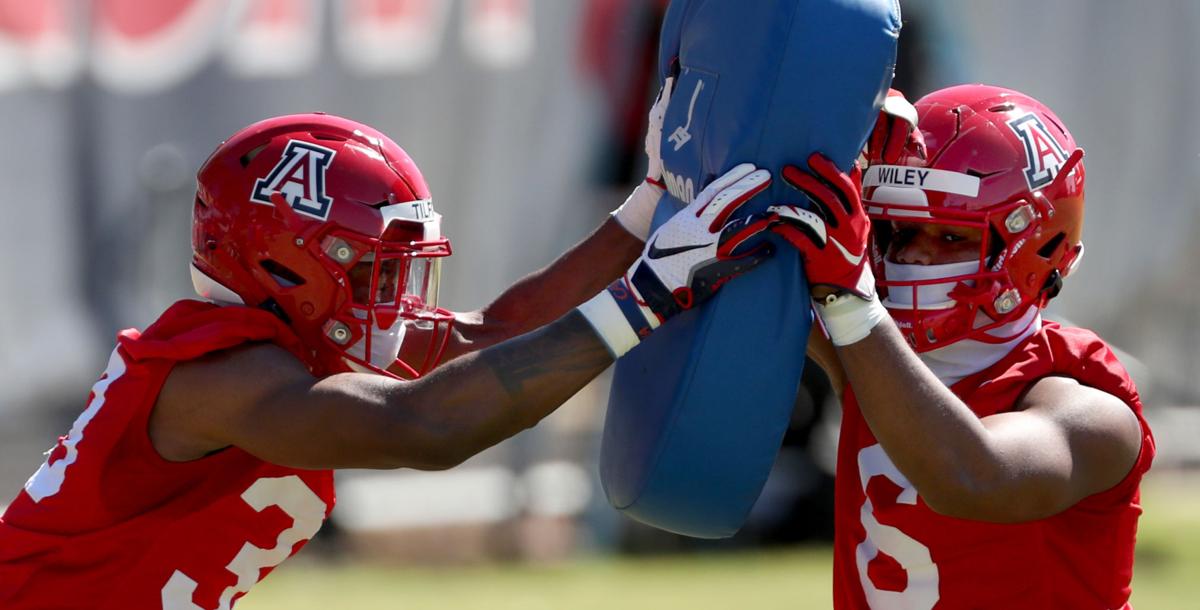 Nathan Tilford, left, and Michael Wiley are part of a talented running back corps that should be a strength for UA. Now, coach Kevin Sumlin has to find a way to utilize all their skills. The Wildcats open their shortened season with a game at Utah on Nov. 7.

Even without Bam Smith, who opted out of the 2020 season, the Arizona Wildcats appear to be loaded at running back.

The question is: How can they utilize all of them?

It’s impractical to rotate five tailbacks. Arizona can use two at once. Some are capable of lining up in the slot. Injuries undoubtedly will happen, even in a seven-game season.

It’s a good problem to have for UA coach Kevin Sumlin and offensive coordinator Noel Mazzone. They’re committed to sophomore quarterback Grant Gunnell, whose sole start-to-finish outing last season — 44 pass attempts in a tight game vs. UCLA — suggests a more pass-oriented attack. But they’re also committed to the ground game to provide balance and alleviate stress on Gunnell, who has only three career starts.

In reviewing the Wildcats’ scrimmage Saturday night at Arizona Stadium, Sumlin praised the performance of the tailback group. From freshmen to seniors, they all caught his attention.

Sumlin first mentioned sophomore Michael Wiley, noting that he has bulked up to 202 pounds. Wiley, who’s 5-11, was listed at 186 last year.

“He’s running with substance,” Sumlin said. “We all know he can catch. He’s done a nice job, has improved.”

Wiley averaged only 3.4 yards per rush last season. He caught 18 passes for 165 yards.

The other veterans are senior Gary Brightwell and redshirt junior Nathan Tilford. Brightwell is the closest thing to a known quantity, having carried 157 times for 915 yards over the past two seasons as J.J. Taylor’s primary backup. “We all know what Gary’s got,” Sumlin said.

Tilford was the top recruit in Arizona’s 2017 signing class. He never has gotten a chance to carry the load — his single-game high is eight carries — but whenever he has played, he has produced. Tilford has a career average of 6.9 yards per attempt.

Sumlin summed up his game simply: “All he does is make yards.”

Sumlin applied a similar description to freshman Jalen John, the biggest of the backs at 222 pounds.

Fellow freshman Frank Brown Jr. has run the 100-meter dash in under 11 seconds and the 200 in under 22 seconds. Like Wiley, Brown is adept as a receiver.

“The two young running have really, in the first week, shown why we recruited them and why they’re here,” Sumlin said. “They want to play, and that gives us a pretty good situation.”

Arizona’s depth on the offensive line has enabled position coach Kyle DeVan to implement a plan: Players are sticking to one spot, at least to the extent that remains plausible.

So with veteran center Josh McCauley dealing with what Sumlin called “a knee issue,” the Wildcats aren’t shuffling the line for the time being.

Senior Steven Bailey and freshman Josh Baker are getting looks at center. Robert Congel, who also has experience in the middle, remains at right guard.

“We know Josh can play,” Sumlin said. “We’re gonna leave our line the way it is, not move guys around all over the place.”

Injuries left the Wildcats no choice last season. Over the final seven games, they never started the save fivesome two weeks in a row.

McCauley missed two-plus games during that stretch because of a knee injury – the only time he has missed over the past two seasons.

He’s been out since the Wildcats’ second practice of fall camp on Oct. 10.

Bailey, a 6-3, 314-pound junior-college transfer, started the Oregon game last year. Baker (6-3, 285) seems to be the most advanced of the freshman linemen and drew plaudits from DeVan for his “high football IQ” and ability to mix it up with graduate-transfer defensive tackles Aaron Blackwell and Roy Lopez.

Wildcats have ‘special’ potential for 2021 baseball season, but will need leadership and sacrifice

‘We all want to win a national championship,’ UofA pitcher Vince Vannelle says. ‘That's our main goal. Everything else is just a distraction at this point.’

Teams are expected to have at least 53 available scholarship players, including one quarterback, seven offensive linemen and four defensive linemen

Arizona Wildcats wide receiver Jamarye Joiner underwent foot surgery in May for a Jones fracture, but the junior revealed on Monday that could…

Typically, a 5:30 p.m. Friday night start would send Wildcats fans panicking about getting off work in time, parking and logistics. However, the Pac-12's decision to play games in empty stadiums during the truncated 2020 season  might make for less of a headache.

Gary Brightwell, left, has 157 rushing attempts for 915 yards over the past two seasons while backing up current NFL player J.J. Taylor.

Nathan Tilford, left, and Michael Wiley are part of a talented running back corps that should be a strength for UA. Now, coach Kevin Sumlin has to find a way to utilize all their skills. The Wildcats open their shortened season with a game at Utah on Nov. 7.