If it isn’t one thing, it’s another.

That’s been the story of this disappointing Arizona Wildcats season. The UA just can’t seem to put a complete game together.

The defense had been the biggest problem of late, its struggles leading to the firing of coordinator Marcel Yates. After a miserable first outing under his replacement, Chuck Cecil, the defense showed promising signs against No. 6 Oregon on Saturday night.

But the offense couldn’t come through.

The Wildcats were held without a touchdown for the first time this season in a 34-6 loss to the Ducks at Autzen Stadium in Eugene.

The loss was Arizona’s fifth in a row and dropped the Wildcats to 4-6, 2-5 in the Pac-12. They need to win their final two games – vs. No. 7 Utah and at Arizona State – to become eligible for a bowl game.

Oregon won its ninth straight. The Ducks improved to 9-1, 7-0 and clinched the Pac-12 North Division with two games to play.

"Our guys are playing hard," UA coach Kevin Sumlin told 1290-AM after the game. "We talked about that in the locker room. We’ve gotta continue to do that. But we’ve gotta eliminate mistakes. We had too many penalties. A lot of those penalties were by guys who hadn't played a bunch. We did some things that we haven't done in the last four or five weeks. Inexperienced players get in there and do inexperienced things, and we saw a lot of that tonight."

Arizona committed eight penalties totaling 45 yards. Half were false starts. The Wildcats were missing two starting offensive linemen and lost another during the game.

Sumlin and offensive coordinator Noel Mazzone changed the rotation at quarterback but couldn’t find the right mix. Freshman Grant Gunnell made his second career start but couldn’t move the offense early behind the makeshift line. Senior Khalil Tate took over and led a pair of field-goal drives late in the first half. But four consecutive Tate-led possessions in the third quarter came up empty.

"We got on the board there in the second quarter," Sumlin said. "We started with the ball and went three-and-out and weren't even able to flip the field.

"We put our defense in some bad positions in the second half, and they actually held up, got us a turnover. But we couldn't do anything offensively.

"The hidden numbers were in special teams tonight. We didn't punt the ball very well. Kyle (Ostendorp) has been doing well the last couple, three weeks. But we weren't really effective." 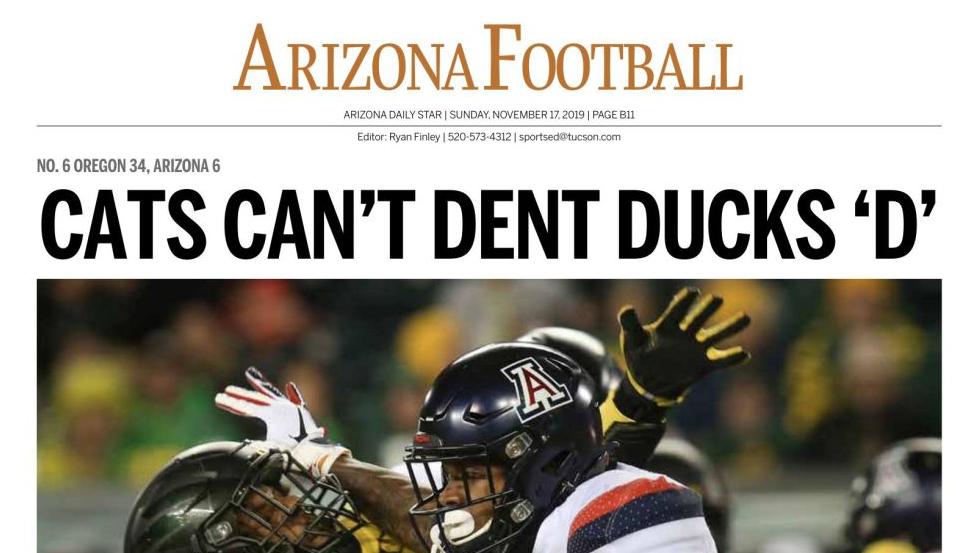 Gunnell returned with 10:02 left and Arizona trailing by four touchdowns. Arizona advanced to the Oregon 11 before turning the ball over on downs.

"We had a bunch of new guys out there – some guys that really hadn't played a lot," Sumlin said. "When you're playing a team of this caliber with backups, I think that showed tonight."

After some shaky moments in the first half, the UA defense performed well in the third quarter – especially considering Oregon’s field position. The Ducks started drives at the Wildcats’ 45- and 41-yard lines but managed only one touchdown, on Justin Herbert’s 24-yard pass to tight end Spencer Webb.

After a running-into-the-punter penalty extended another Oregon possession, Arizona came up with its first interception since Sept. 28. On fourth-and-10 from the UA 29, a diving Tristan Cooper deflected a Herbert pass. Scottie Young Jr. snared it at the 6 and returned it to the Arizona 48.

But the Wildcats went three-and-out, without gaining a yard, and the Ducks put the game away with an eight-play, 88-yard touchdown drive. They finished it with a 33-yard screen pass from Herbert to Travis Dye 4:58 into the fourth quarter.

"I told Justin after the game, I thought he played extremely well," Sumlin said. "He's poised. He's a big guy that can move around. He was extremely accurate too."

Herbert completed 20 of 28 passes for 333 yards and four touchdowns. Oregon outgained Arizona 471-240. The latter was a season low for the Wildcats.

Arizona hung around through 30 minutes, trailing 21-6 at halftime.

The Wildcats had three first-half sacks, tying their season high set in their last game vs. Oregon State.

Despite having an extra week to prepare and get used to Cecil, the UA defense immediately reverted to some old, bad habits.

On the second play from scrimmage, a coverage bust left Johnny Johnson III wide open down the right sideline. Herbert hit him in stride for a 73-yard touchdown. Two defenders – senior Jace Whittaker and freshman Christian Roland-Wallace – jumped a route in the flat, leaving Johnson uncovered.

After a trio of punts – including one after a three-and-out forced by the Arizona defense – Oregon struck again. This time it was a methodical march, covering 76 yards in 13 plays and lasting over six minutes. Cyrus Habibi-Likio finished it with a 1-yard TD run.

After another Arizona drive fizzled, Oregon drove to the UA 1. But the Wildcats held. Jalen Harris, Colin Schooler and others stuffed CJ Verdell for a 1-yard loss on third-and-goal. Camden Lewis then missed a 20-yard field-goal attempt.

Tate entered the game at that point, and his 21-yard scramble on third-and-15 moved the Wildcats near midfield. But the drive stalled, giving Oregon a chance to expand its lead.

The Ducks advanced to their 47 and ran a double-reverse flea-flicker. Juwan Johnson ran past Roland-Wallace down the left sideline, and Herbert hit him for a 53-yard touchdown to make it 21-0 with 5:09 left in the first half.

With Tate still at quarterback, the Wildcats put together a pair of field-goal drives in the final 2:56 of the half. Lucas Havrisik drilled them both, from 23 and 42 yards.

The drives sandwiched a positive defensive possession that featured a sack by Whittaker – the first of his career and the first by a UA defensive back this season.

Check out photos from the game here:

The Cats and Utes will get going a little after 8 p.m. on FS1.

The Star's exclusive, in-depth look back at the Cats' performance against the Ducks.

Territorial Cup between Arizona Wildcats, ASU to kick off under the lights

The annual season finale between the bitter rivals will get underway at 8 p.m. in Tempe.