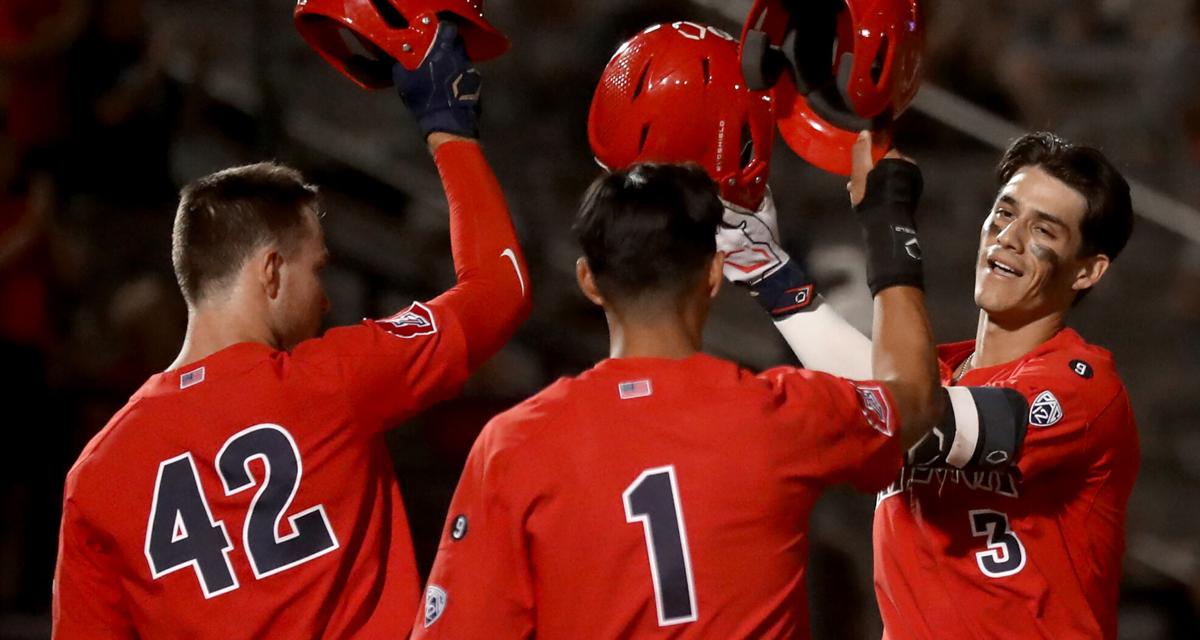 Arizona’s Tony Bullard, right, celebrates his homer with Ryan Holgate, left and Kobe Kato during the 4-0 win over UC Santa Barbara on Saturday. The Wildcats will host Ole Miss in the Super Regionals this weekend.

Second baseman Kobe Kato and the Wildcats outscored their regional opponents 21-4 after falling behind Grand Canyon 4-0 in the opener Friday night.

It doesn’t always go as planned. Jay Johnson knows that as well as anyone.

Although Arizona reached the College World Series finals in his first season in 2016, the Wildcats first had to survive an exhausting regional in Lafayette, Louisiana. They had to win three elimination games in a row, including two against the host team on a marathon Monday. Just four days later, Arizona squared off against Mississippi State in the Super Regionals. The Wildcats didn’t go home until after that series.

This past weekend, the plan worked to perfection. Arizona was set up for success, and the Wildcats delivered.

The UA marched through the Tucson Regional in workmanlike fashion. After falling behind 4-0 in the opening game Friday against Grand Canyon, Arizona outscored the opposition 21-4. The UA completed the weekend sweep by defeating UC Santa Barbara 5-2 Sunday night in front of 3,635 rapt fans at Hi Corbett Field.

Just like 2016, Arizona will face an SEC opponent with a trip to Omaha on the line. Ole Miss, the No. 12 seed in the NCAA Tournament, will come to Tucson this weekend after holding off Southern Mississippi 12-9 on Monday to win the Oxford Regional.

How did Arizona (43-15) get it done against GCU and UCSB? Here are three key factors that fueled the Wildcats’ run:

Arizona’s offensive depth was on full display during a weekend when its usual top run producers were held in check.

The batters hitting in the Nos. 5-9 spots in the order — Kobe Kato, Tony Bullard, Ryan Holgate, Tanner O’Tremba and Nik McClaughry, plus outfield sub Tyler Casagrande — carried the UA offense. Those six players combined for a .441 batting average. They scored 16 of the Wildcats’ 21 runs, accounted for 17 of their 21 RBIs and hit all four of their home runs.

“I just casually looked up at the board and saw they were like 7 for 8 at one point in time,” Johnson said after the GCU game, in which the bottom five hitters combined for 13 hits in 22 at-bats. “I was like, ‘Man, let’s just let these guys hit the whole game, we’ll be in good shape.’

“We just want an all-out assault of quality at-bats one through nine.”

Johnson has tweaked the order throughout the season. The current configuration alternates left- and right-handed hitters between the No. 3 (Branden Boissiere) and No. 8 spots (O’Tremba).

Bullard, the hottest hitter on the team, has moved from No. 8 to No. 6. Holgate — who’s hitting .353 with nine home runs, including a two-run blast Sunday — wouldn’t bat seventh in many lineups, if any.

The production from the bottom off the order offset an off weekend for Jacob Berry, Boissiere and Daniel Susac. Those three, batting second through fourth, had just seven hits in 37 at-bats (.189).

Leadoff batter Donta’ Williams was his usual self, going 5 for 13 with three walks.

Johnson and hitting coach Marc Wanaka are renowned for putting together prolific offenses. What’s different about this year’s team is that it has pitching depth to match.

“This was my kind of ball this weekend,” Johnson said Sunday, “using five or six guys on Friday night and then five or six guys today. And you get a standout performance by Garrett in the middle of it.

“I couldn’t be happier with how that side of the game went. To get to Omaha, you have to be able to do that.”

In all, the relief corps allowed two earned runs in 10 innings for a 1.80 ERA. And, as Johnson noted, the Wildcats didn’t have to use Quinn Flanagan, who has a 3.69 ERA and 39 strikeouts in 31 2/3 innings, or fellow right-hander Austin Smith, whose fastball can reach the upper 90s.

Price said Arizona has made a “huge jump” over the past couple of seasons, and that might be an understatement. The Wildcats have lowered their team ERA by almost two runs since 2019, the season before Yeskie was hired. Johnson has devoted about two-thirds of Arizona’s scholarships to pitchers, and that investment is paying off.

Arizona earned the right to serve as a host by posting a 40-15 regular-season record and winning the outright Pac-12 championship. The value of that accomplishment cannot be overstated.

Unlike GCU and Oklahoma State, Arizona didn’t have to get on a plane last week. That, combined with Irvin’s complete game Saturday, put the Wildcats in an advantageous position entering Sunday.

“It was a big deal,” said Johnson, adding that his team was “borderline gassed, physically and mentally” during the season-ending series against Dixie State. The Wildcats had to rally to win the series against the Trailblazers, who had an RPI in the 200s.

“I’m proud of the team for winning two out of three in that series, as crazy as that might sound,” Johnson said.

Three taxing weekends preceded it. Arizona went toe-to-toe with Stanford on the road, losing two of three, including a 13-inning game. The UA swept Washington at home, but doing so required a miraculous extra-inning comeback in the opener. Arizona then took two of three at Oregon State, rallying from a 5-1 deficit in the final two innings to capture the series.

The UA wasn’t sharp against Dixie State, but Johnson wisely scheduled the series for Thursday-Saturday, giving the Wildcats a much-needed extra day off.

“Then you know what’s coming,” Johnson said. “This is a great group of guys where they can, I don’t want to say turn it on, but they know when to step it up. This week of practice was the best week of practice we’ve had since January.

“We deserved this victory this weekend. There was no doubt in my mind we were going to play well because everything leading into it ... was pointing towards us having success.”

When: This weekend, TBD

The Aztecs will next play Wednesday after a 3-0 victory to wrap up pool play Monday.

Ole Miss won’t show up at Hi Corbett Field for Friday night's opener of the NCAA Super Regionals with any fear.

Arizona’s Tony Bullard, right, celebrates his homer with Ryan Holgate, left and Kobe Kato during the 4-0 win over UC Santa Barbara on Saturday. The Wildcats will host Ole Miss in the Super Regionals this weekend.

Second baseman Kobe Kato and the Wildcats outscored their regional opponents 21-4 after falling behind Grand Canyon 4-0 in the opener Friday night.