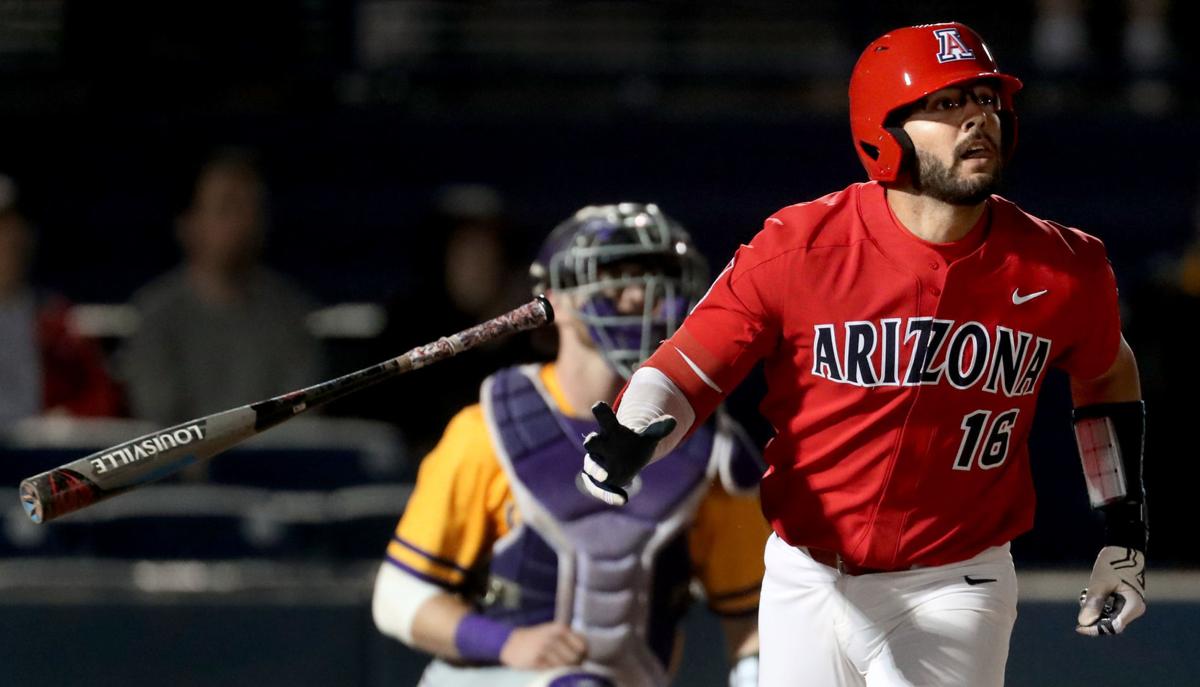 Arizona's Austin Wells (16) tosses his bat as he watches his blast chase home three Wildcat runs against Albany in the second inning of their season opener at Hi Corbett, February 14, 2020 Tucson, Ariz. 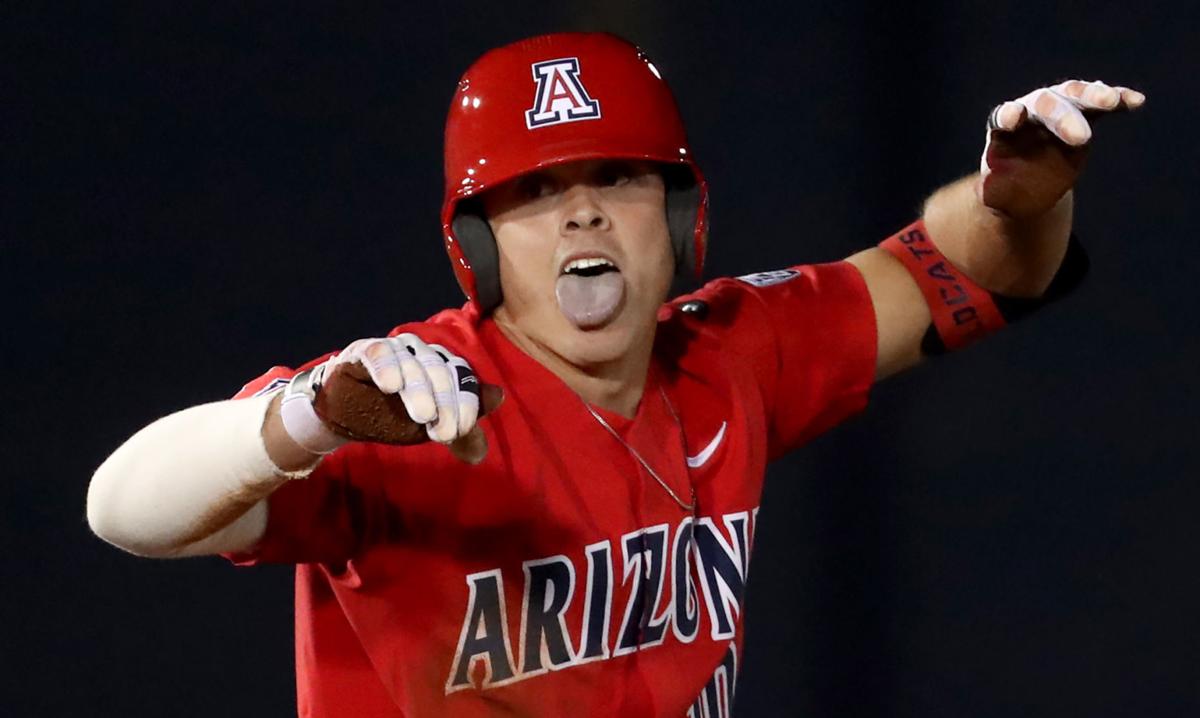 Arizona's Jacob Blas (10) celebrates at second base after slapping a one double against Albany in the third inning of the Wildcats season opener at Hi Corbett, February 14, 2020 Tucson, Ariz.

Austin Wells hit a home run in the first at-bat of his Arizona Wildcats career.

The preseason All-American and projected first-round draft pick smashed a three-run shot in the bottom of the second inning to spark Arizona to a 12-7 victory over Albany in the season opener Friday night at Hi Corbett Field.

The Wildcats extended the nation’s longest active winning streak to 11 games. They also won their 17th straight home opener, including five in a row under Jay Johnson.

"I thought our players were ready to play," Johnson said. "I think they controlled the opening-night thing. Everybody's a little excited and can try to do too much. I don't think they did that. We were very prepared in that manner. And I think it led to a lot of good play."

Wells became the first Wildcat to be named Pac-12 Freshman of the Year last season, and he showed no signs of slowing down. The left-handed-hitting catcher went 3 for 4 with two doubles, four RBIs and a walk. His home run sailed over the refurbished “Intimidator” board in right-center and was estimated to have traveled 408 feet.

"If we go 80% quality at-bats with anybody, we’ll be happy," Johnson said. "It’s something that we've kind of become accustomed to (with him).

"He’s just a complete hitter. He handles all types of pitches in all types of zones, and I think we saw that tonight."

Arizona catcher Austin Wells went 3-4, including a 400-foot HR in the Wildcats’ win over Albany. Here’s Wells after the game: pic.twitter.com/9vMFXeWtTY

Several Wildcats made their UA debuts Friday night – including their starting pitcher and an important addition to the coaching staff.

Irvin, facing an all-right-handed lineup, struggled with his command at times but threw 58 of 88 pitches for strikes. He worked out of a first-and-third jam in the fourth inning and retired the side in order in the fifth. Irvin also picked off two baserunners.

"It was nerve-racking," said Irvin, who posed for a picture with several friends and family members in the stands after speaking to the media. "We work all fall to prepare for today. So it was nice to kind of get it out of the way. ... But for me, it was a lot of fun."

"He's a competitor," Wells said, "and he definitely fought through a lot of pitches in a short amount of innings. But he got through five (and) kept us ahead."

Arizona pitcher Garrett Irvin on his first start at Arizona: “Early on, I was nervous. ... I didn’t have my best stuff today.” Irvin pitched 7 strikeouts in 5 innings and allowed 4 hits, 2 runs and a walk. pic.twitter.com/yKOSvQqBhh

Irvin’s fourth-inning escape followed a visit to the mound by new pitching coach Nate Yeskie. Arizona hired Yeskie away from Oregon State, where he established himself as one of the top assistants in the nation.

Yeskie has been tasked with improving a staff that ranked last in the Pac-12 in ERA last season. The initial results were mostly positive.

Irvin, Vince Vannelle and Nate Brown combined to strike out 14 batters – two more than the Wildcats registered in any game last season.

"It's a lot easier to play defense when you strike people out," Johnson said.

Who: Albany at Arizona

Coach is 18-0 against Cardinal since coming to Tucson.

Helena Pueyo, Arizona Wildcats light it up from deep to notch 20th win

3 up, 3 down: What we learned from the Arizona Wildcats’ 15-0 win over Albany

Six takeaways from the Cats’ triumph over the Great Danes in Game 2 of the 2020 season.

The sophomore hit .545 with a home run and eight RBIs in the UA's season-opening sweep of Albany.

Arizona's Austin Wells (16) tosses his bat as he watches his blast chase home three Wildcat runs against Albany in the second inning of their season opener at Hi Corbett, February 14, 2020 Tucson, Ariz.

Arizona's Jacob Blas (10) celebrates at second base after slapping a one double against Albany in the third inning of the Wildcats season opener at Hi Corbett, February 14, 2020 Tucson, Ariz.