The Arizona Wildcats’ road to the 2012 College World Series championship included a faceoff against a familiar foe.

After defeating No. 3 overall seed Florida State in its Omaha opener, the UA squared off against No. 2 seed UCLA.

The Bruins took two of three from the Wildcats in a mid-April series at Hi Corbett Field. It was a rare series loss for Arizona, which ended up sharing the regular-season conference crown with UCLA.

Like the Wildcats, the Bruins had swept their way through the postseason. Not only that, but UCLA rarely had been challenged; its narrowest margin of victory in the NCAA Tournament was three runs.

Would the story change in the fourth meeting between the West Coast rivals?

We’ll revisit the Arizona-UCLA matchup from the CWS as we continue to look back at the Wildcats’ title run. The 10th anniversary of Arizona’s fourth national championship in baseball is Saturday. Throughout the week we’re recapping each of the Wildcats’ five victories in Omaha. Come Saturday, we’ll catch up with some of the key participants.

What went down: Sophomore right-hander Konner Wade dominated the Bruins.

Wade fired a five-hit shutout (all singles). He struck out four UCLA batters and didn’t walk any, recording the first complete-game shutout without a walk in CWS play since 1972. Wade also became the first UA pitcher to toss a shutout in Omaha since Craig Lefferts in 1980.

The Bruins’ biggest threat came in the fifth inning, when they loaded the bases with two outs. But Wade got Kevin Williams to fly out to left field to end the frame.

The Wildcats led 4-0 at that point, having scored all of their runs in the bottom of the fourth. Designated Bobby Brown delivered the key blow, a two-RBI double that scored Robert Refsnyder and Seth Mejias-Brean, who also knocked in two with a base hit.

By the numbers: Wade extended his walk-less streak to 25 1/3 innings and lowered Arizona’s postseason ERA at that point to 2.01. UA pitchers issued only eight walks and threw four complete games in the Wildcats’ first seven postseason contests.

They said it: “(Wade) pitched as well as anybody we’ve seen all year. We weren’t ourselves, but it had a lot to do with him. We were uncharacteristically impatient. And that’s what good pitchers do.” – UCLA coach John Savage

“They like to play. They like to compete. They don’t — well, they’re not in awe of too many things. It’s an easy group to be around.” – Lopez

We wrote it: Eight times in eight innings Sunday night, Konner Wade skulked off the mound and trudged, head down and eyes fixed, to his spot in the home dugout.

He spoke only when spoken to, and — even then — mostly in grunts. Occasionally, Wade glanced at a Bible passage written on the underside of his navy blue, block-A cap: “For the spirit God gave us does not make us timid, but gives us power, love and self-discipline.”

“I don’t like talking to people in between innings,” he said. “I’ll give a guy knuckles every once in a while, but that’s about it.”

Wade guessed that he spoke 30 words in the Arizona Wildcats’ 4-0, College World Series win over UCLA at TD Ameritrade Park.

His performance, however, screamed it. The Arizona Wildcats are national-title contenders.

Where are they now? Wade is pitching for the Tacoma Rainiers, the Triple-A affiliate of the Seattle Mariners. He has a 2-2 record and a 5.03 ERA in eight appearances, including seven starts. Wade appeared in seven games with the Baltimore Orioles last season.

Davis had a breakout sophomore season for the Wildcats, belting a team-leading 18 home runs.

A Q&A with the coach of the 2012 Wildcats, who won the College World Series for the fourth time in program history.

The Arizona Wildcats defeated South Carolina 4-1 in Game 2 of the 2012 College World Series to win the best-of-three series two games to zero.

A decade has passed since Arizona won the College World Series, but the competitive fire still burns within Kurt Heyer and Konner Wade.

Susac is the 13th Wildcat to log multiple All-America campaigns after being honored by Baseball America and D1Baseball. 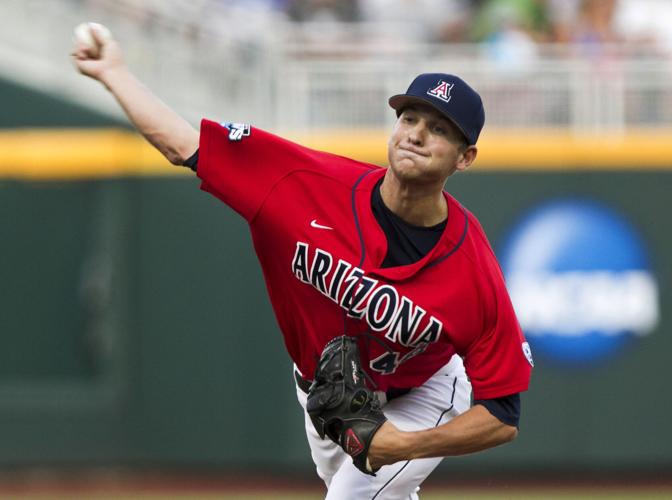 Arizona pitcher Konner Wade dominated UCLA in the 2012 College World Series, allowing five hits (all singles) in the first complete-game shutout without a walk in CWS play since 1972. 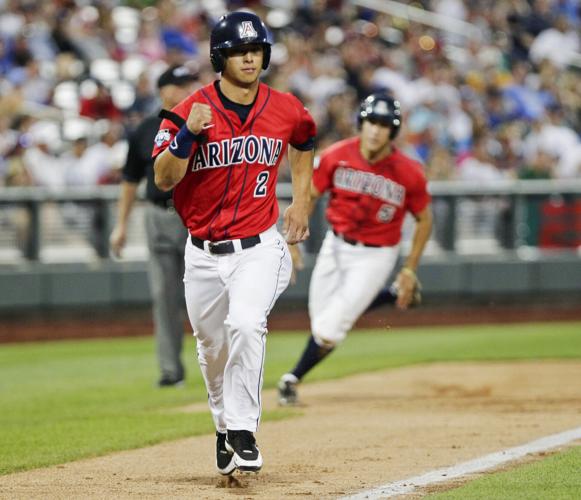 Arizona' Robert Refsnyder pumps his fist as he and Seth Mejias-Brean score on a two-run double by Bobby Brown in the fourth inning of their June 17, 2012 College World Series win over UCLA.