The Arizona Wildcats are headed to Super Regionals. And they won’t have to board a bus or plane to get there.

The Wildcats’ second win in as many nights over the Gauchos advances them past the regional round of the NCAA Tournament for the first time since 2016. Arizona reached the College World Series finals that year.

The Wildcats had to go through Lafayette, Louisiana, and Starkville, Mississippi, to get to Omaha in ’16. The road to the CWS goes through Tucson this time. Arizona, the No. 5 overall seed, will host either Ole Miss or Southern Mississippi next weekend. They play for the Oxford Regional on Monday.

UA coach Jay Johnson's postgame interview with ESPN aired on the video board at Hi Corbett.

"All you people be out here next weekend," he said, "and bring all your friends!"

Johnson later talked about his vision for the UA program and how this past weekend fulfilled it. More than 13,000 fans attended Arizona’s three games. They were stomping and roaring when the final out was completed.

“This was fun,” Johnson said. “There were a couple times over the last couple of days where I just kind of looked up. This is the vision (I had) when I came here – hosting a regional, getting this fan base excited and energized.”

The Wildcats’ on-field celebration was relatively subdued. The players didn’t form a dogpile after clinching the regional. They did douse Johnson with water.

“I feel like every game we go into we expect to win,” said outfielder Ryan Holgate, who went 2 for 3, including a two-run homer in the sixth inning. “There was no dogpile because we’ve still got a long ways to go. We are working our way. We worked our way into the Super Regionals. There's still a lot more business that needs to taken care of. We're just gonna keep pushing forward.”

Although they were playing their second game of the day, the Gauchos gave the well-rested Wildcats everything they could handle. UCSB had the go-ahead run at the plate in the seventh inning. Arizona’s early-season stopper put out the fire.

Preston Price struck out Marcos Castanon – the Gauchos’ best hitter – with runners on second and third to end the threat. Price was making only his second appearance since April 9, having missed nearly two months because of an arm injury. He showed some rust, uncorking three wild pitches in the seventh, including one that scored a run.

The fifth-year senior worked a 1-2-3 eighth before passing the baton to classmate Vince Vannelle. Vannelle worked around an infield single and a bloop single in the ninth to secure his eighth save of the season.

The Wildcats held the Gauchos to two runs in two games. UCSB scored 27 runs in two wins over Oklahoma State, including a 13-3 decision earlier Sunday.

“We have a lot of depth,” Johnson said. “It is hard to prepare for our entire staff because there's left, there's right, there's velocity, there's changeups, there's real out-pitch breaking balls. I'm really pleased with those guys, and it's made the starters’ job easier.”

The No. 3 spot in the UA rotation was in flux for much of the season. Johnson tapped Chandler Murphy to start the Wildcats’ third game of the tournament. It was a logical choice.

Although Murphy had lost his spot in the rotation entering Pac-12 play, the second-year freshman emerged as one of Arizona’s most effective pitchers over the final two months of the regular season. He started the opener of the UA’s season-ending series against Dixie State and pitched well, allowing two runs (none earned) in five innings.

Johnson dubbed Murphy, who attended Peoria Liberty High School, “probably the most important recruit in the state of Arizona for the class of 2019.” Johnson praised Murphy’s “pitchability” and poise.

He showed his composure repeatedly against UCSB. Unlike the previous night against Irvin, the Gauchos applied consistent pressure. They put at least one runner on base in each of Murphy’s five innings.

Murphy never buckled, yielding only one run. His most impressive escape came in the fourth, when UCSB loaded the bases with two outs. Murphy struck out pinch hitter Christian Kirtley with a 3-2 slider to end the threat.

“He's made a lot of strides,” Price said of Murphy, who improved to 7-0. “He's always had that bulldog mentality. Him just commanding the outside corner today and just pounding that spot really played for him.”

Murphy also received considerable help from his defense. Arizona turned three double plays in the first five innings, including a rare 6-3-5 play to conclude the fifth.

Arizona’s bats were surprisingly quiet against UCSB starter JD Callahan, who entered Sunday with a 5.96 ERA and a 1.54 WHIP. The Wildcats scored two runs in the second inning but went just 2 for 10 with runners on base through the first five.

Arizona finally got to Callahan and gained some separation in the sixth. The rally started with a single by Tony Bullard on an 0-2 pitch. It continued with a 413-foot home run to right field by Holgate, who just missed hitting one out the previous night.

“You could see that at-bat coming all weekend,” Johnson said. “He had an outstanding tournament in terms of quality at-bats. It might have flown under the radar until that big home run, but Ryan's a big reason why we won this weekend.”

The Wildcats bumped their lead to 5-2 in the eighth on Nik McClaughry’s two-out, two-strike single. The base hit scored Bullard, who had led off the inning with a walk.

Johnson spent a considerable amount of time basking in the moment after the game. He posed for pictures with family members who were in from out of town and walked around the outfield with his wife.

“We're going to celebrate this victory tonight,” Johnson said, “and you're going to have no problem getting my attention, my staff's attention or our players’ attention for the next opportunity next weekend.” 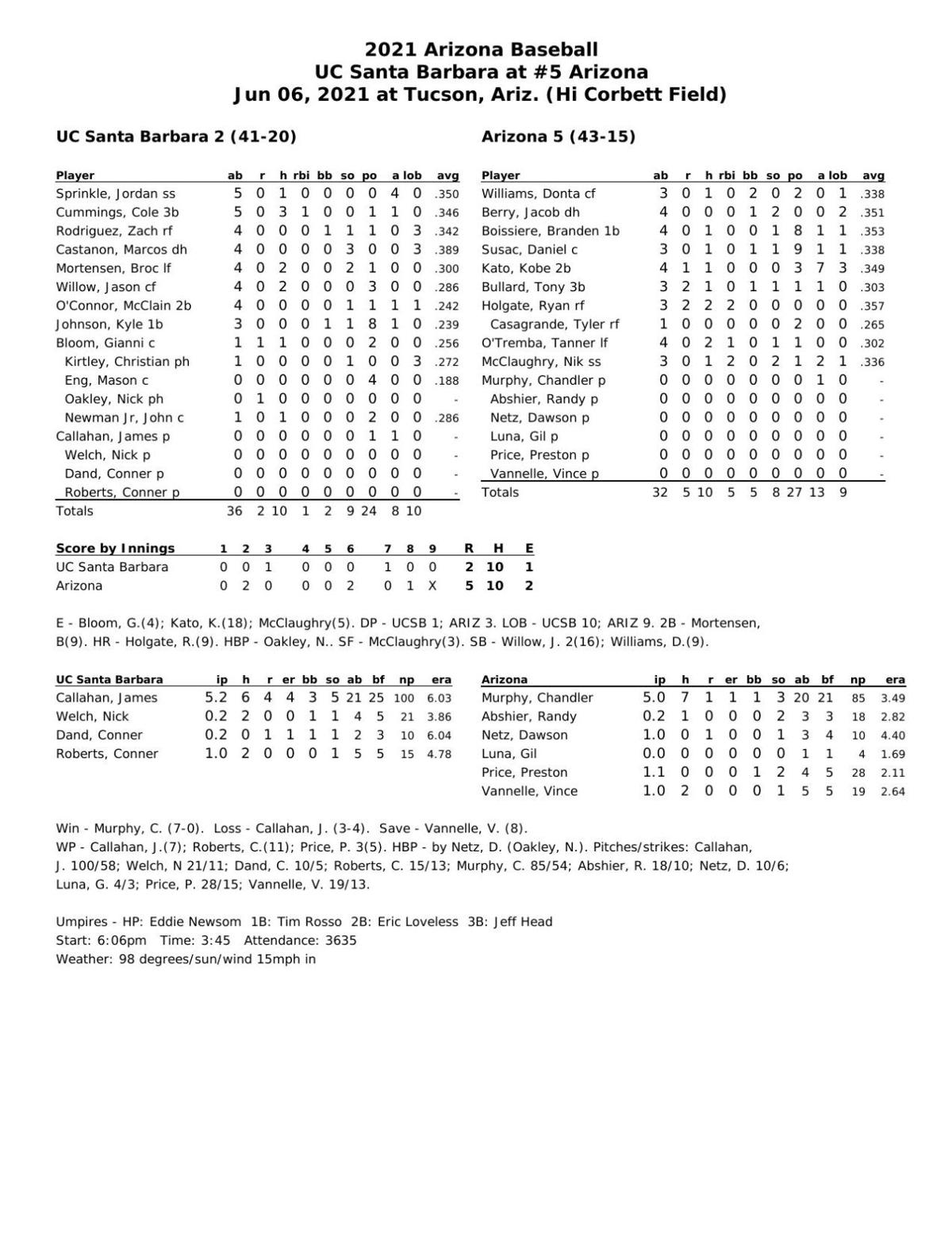 Donta’ Williams’ thievery, plus two home runs from the bottom of the order, help the Wildcats rally past the Lopes. 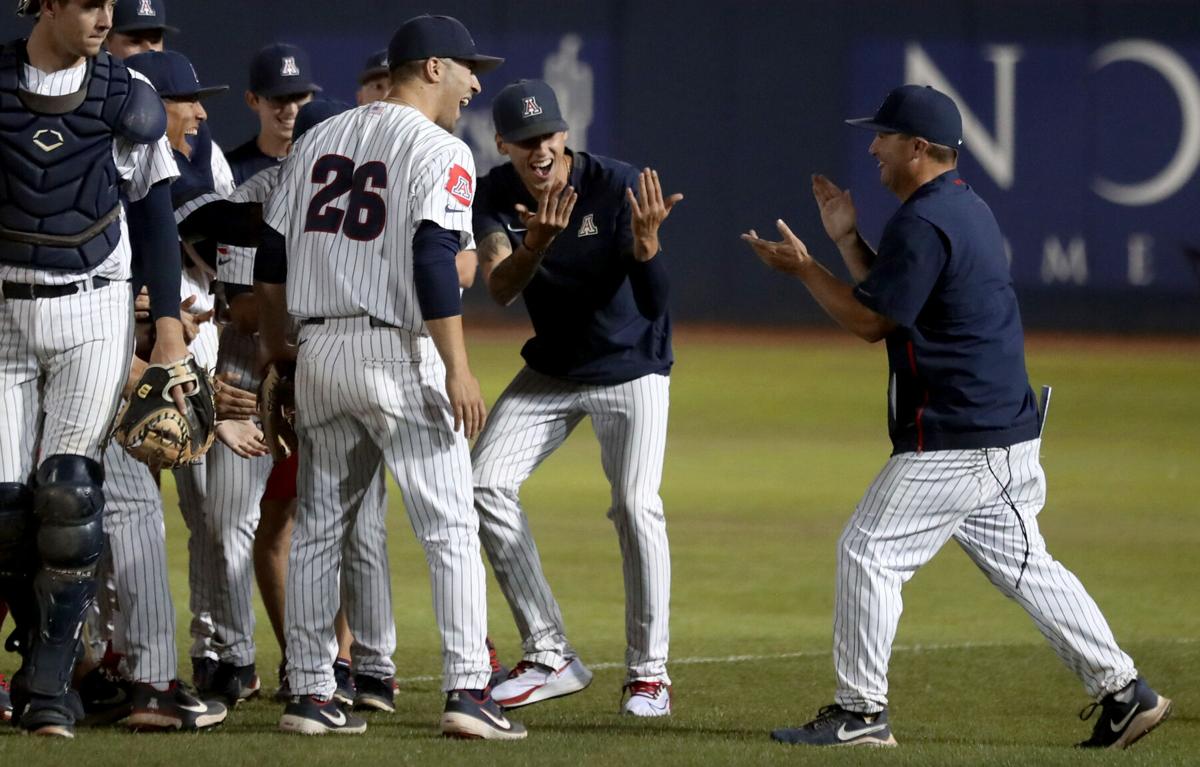 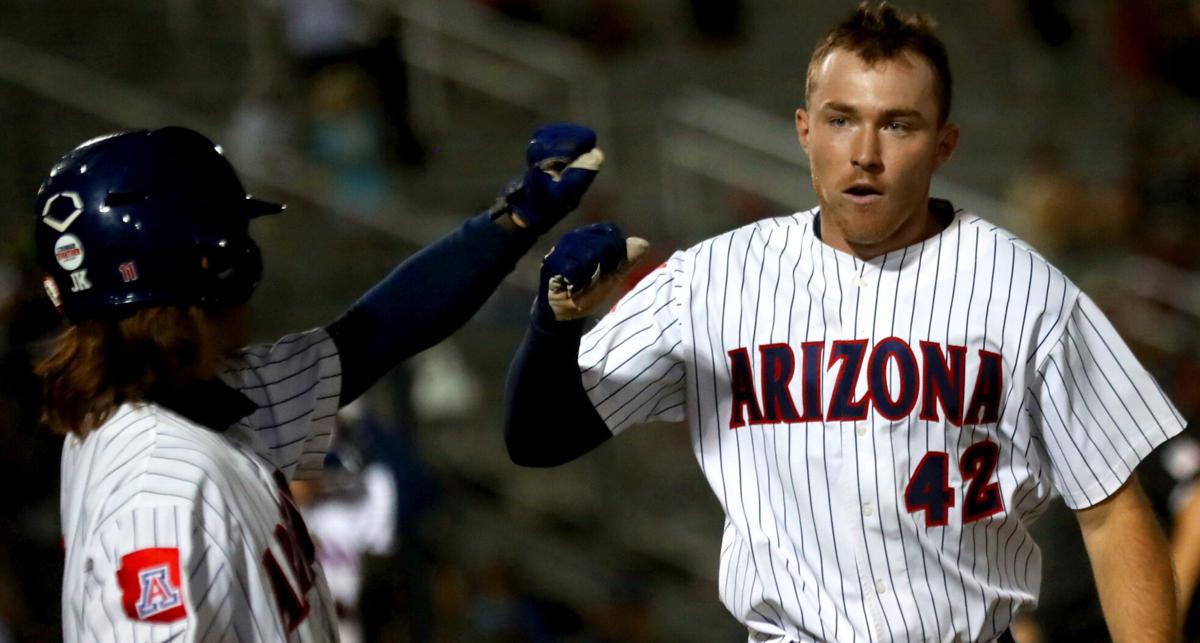 Arizona's outfielder Ryan Holgate (42) gets congratulated after smacking a two-RBI homer for a few insurance runs against UC Santa Barbara in the sixth inning of the Regional final at Hi Corbett Field, Tucson, Ariz., June 6, 2021. 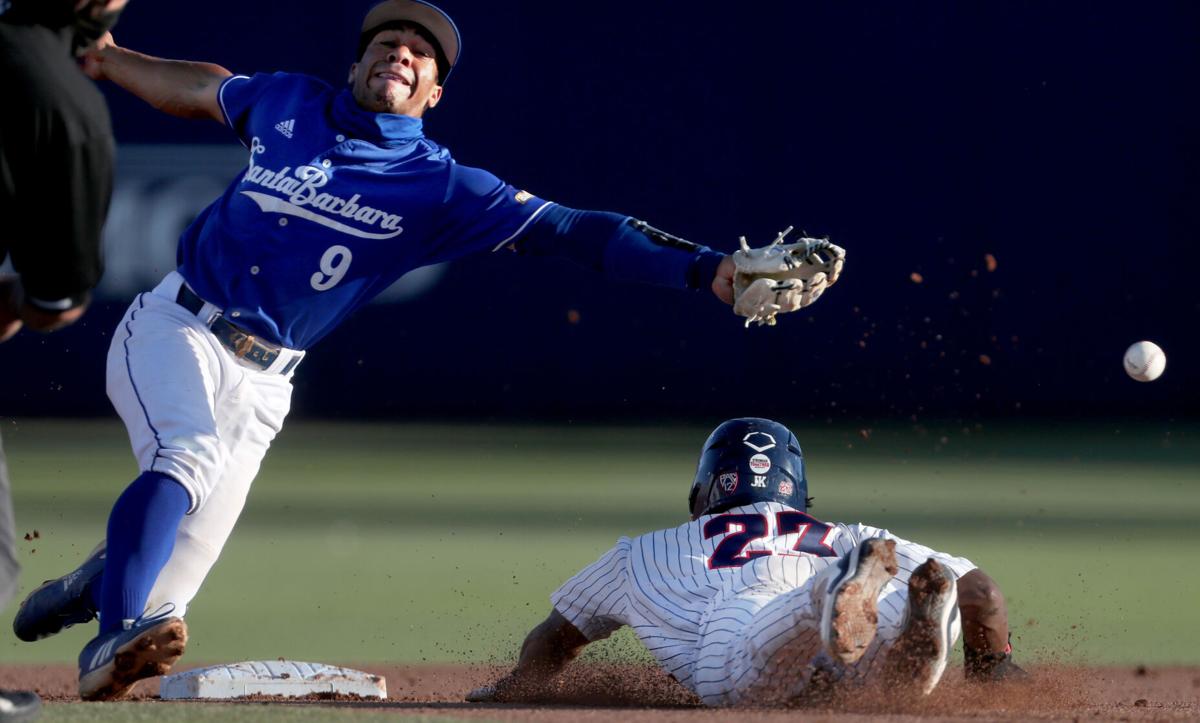 UC Santa Barbara's second baseman Jordan Sprinkle (9) can't get to the throw as Arizona's Donta Williams (23) slides into second with a stolen base in the first inning of the Regional finals at Hi Corbett Field, Tucson, Ariz., June 6, 2021. Williams ended up at third on the error.