The crowd at Hi Corbett Field stomped and roared.

Everything came together for Arizona on a sizzling Super Regional Sunday night in Tucson. The UA dismantled Ole Miss, winning 16-3 in front of 5,139 giddy fans to secure one of eight spots in the College World Series.

Arizona is headed to Omaha for the second time in five full seasons under Jay Johnson and the 18th time in program history. In his first season at the UA, 2016, the Wildcats came within a hit of winning it all.

Most of them seemed to be on the field for a raucous and lengthy celebration after the final pitch. The players dumped a bucket of water on Johnson while he conducted an interview with ESPN. Freshman outfielder Chase Davis ran through the sprinklers in the outfield. Players and coaches hugged one another and welcomed family members for pictures to commemorate the moment.

“It was awesome getting to hug every one of my teammates.” said veteran first baseman Branden Boissiere, who had four of Arizona’s 20 hits. “It was the best feeling in the world knowing that we were going to Omaha and all the work that we put in for the season has finally paid off.”

Arizona, the No. 5 seed in the NCAA Tournament, will face another SEC opponent, Vanderbilt, in its CWS opener. The fourth-seeded Commodores swept East Carolina in Nashville and feature two projected top-five MLB draft picks atop their rotation in Kumar Rocker and Jack Leiter.

Not many pitchers have slowed down the Wildcats. Rebels left-hander Doug Nikhazy flummoxed them Saturday to force the winner-take-all Game 3. More often than not, though, the Cats get theirs.

Arizona’s 16 runs Sunday marked the 26th time this season the Wildcats have reached double digits. They have scored 15 or more eight times.

All but one member of the starting lineup had at least one hit Sunday. Six players had two or more.

“That was legit,” Johnson said. “I think this is the best offense in Pac-12 history. I'm not a historian, so I can't validate that. Bbut if there's one that's equal, I'd like to see what that looked like.”

Arizona (45-16) closed the book on a historic season at Hi Corbett with a 32-8 home record. Unlike the 2016 run, the Wildcats punched their ticket to Omaha on their home field.

“This is way better,” Johnson said. “Not to take anything away from that – that was amazing.

“This was more of ... everything that you dream about. The significance of that out there, seeing our players as happy as they are and proud as they are, getting a chance to be with them ... and their families is why I do this.”

Aces will be lined up for both sides in Omaha. Getting there often requires innovation.

It wasn’t surprising that Ole Miss tapped Taylor Broadway to start Sunday – even though Broadway never had started a game for the Rebels. He’s been one of the best closers in the country – compiling a 4-2 record, a 2.51 ERA and 16 saves – and hadn’t pitched since Monday.

Dawson Netz, though? No one saw that coming.

Netz, a second-year freshman, had started only once in 25 appearances. His UA classmate, Chandler Murphy, had eight starts, including the past two weekends. He also hadn’t pitched in the Super Regionals.

But a closer look revealed the method behind Jay Johnson’s seeming madness. Netz has improved steadily since the start of the season and had allowed only one hit in his previous nine outings, spanning 9 2/3 innings. After Netz threw a scoreless inning Friday, Johnson said the right-hander “just keeps getting better every time he goes to the mound.”

Netz delivered exactly what Johnson and pitching coach Nate Yeskie were seeking. Netz retired the first six batters he faced. After allowing a single to lead off the third, Netz handed the baton to true freshman TJ Nichols. Nichols surrendered a run, which was charged to Netz, but pitched out of trouble to keep the score tied 1-1.

“It was definitely big,” Nichols said. “Getting behind 2-0 to the first guy (Hayden Leatherwood) and giving up the double was kind of a punch in the gut a little bit. But I locked in, made my pitches, didn't change my plan. It was important to make sure both of them didn’t score.”

Arizona’s bats then came alive. Berry – another freshman – blasted a two-run homer off Broadway in the bottom of the third. It was Berry’s team-leading 17th home run of the season.

Holgate followed with another two-run shot in the fourth, his 10th of the year. Berry’s traveled 434 feet, Holgate’s 439.

Arizona scored seven runs in all in the bottom of the fourth, extending its lead to 10-1. When Holgate grounded out to end the inning, the crowd gave him and his teammates a standing ovation.

Their seasons aren’t over yet.

“It shows character. It's one thing to say you want to go do something. It's an entirely different thing to go do it every day for a long period of time. And these guys have done that.”

The UA, which hasn’t lost consecutive games since mid-April, is set to open CWS play against perennial powerhouse Vanderbilt.

How they got here: Arizona rode historic winning streaks, big bats all the way to Omaha

A Q&A with the former Arizona left-hander, who’s now serving as an undergraduate assistant for Jay Johnson and Nate Yeskie.

Check out the top home run hitters in the 2021 College World Series.

In a typical year, the College World Series would boast opening ceremonies, fireworks, autograph sessions and open practices. But this is not a typical year.

Berry on Susac, Susac on Berry: Arizona freshmen dish on each other's games

OMAHA, Neb. — Jacob Berry and Daniel Susac, Arizona’s stellar freshmen, don’t compete with each other when it comes to stats. Which doesn’t me… 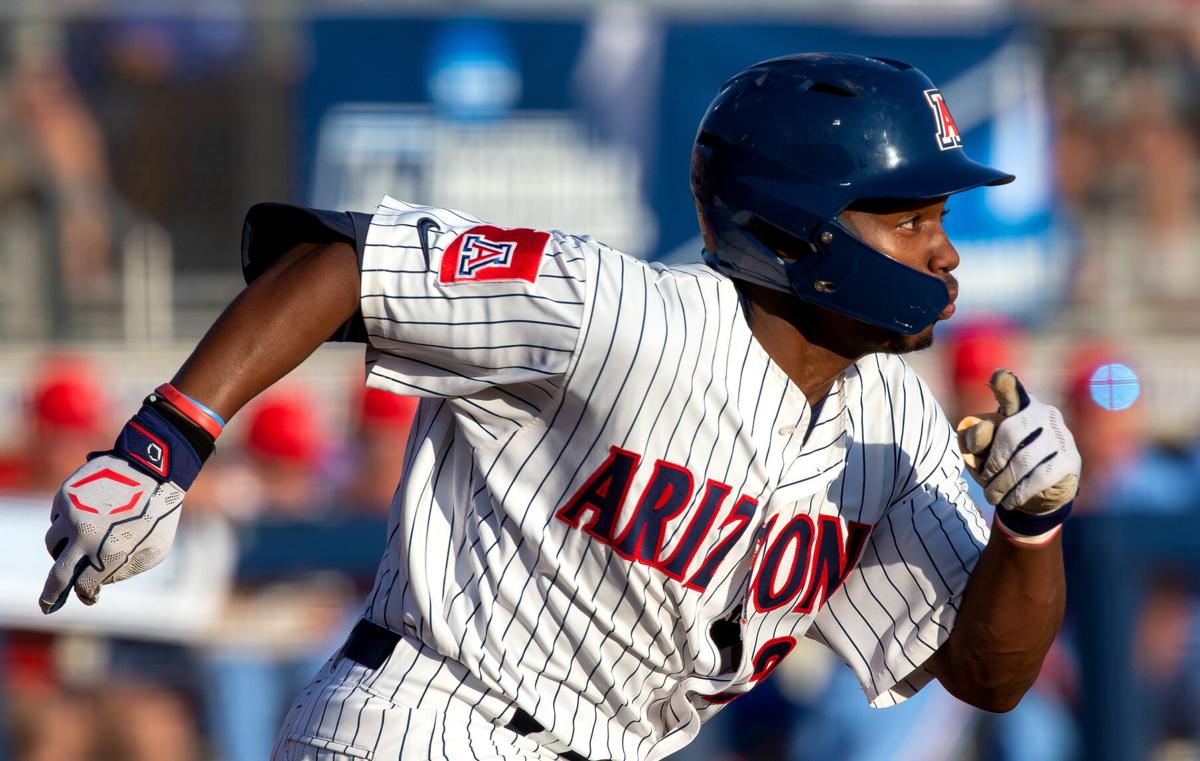 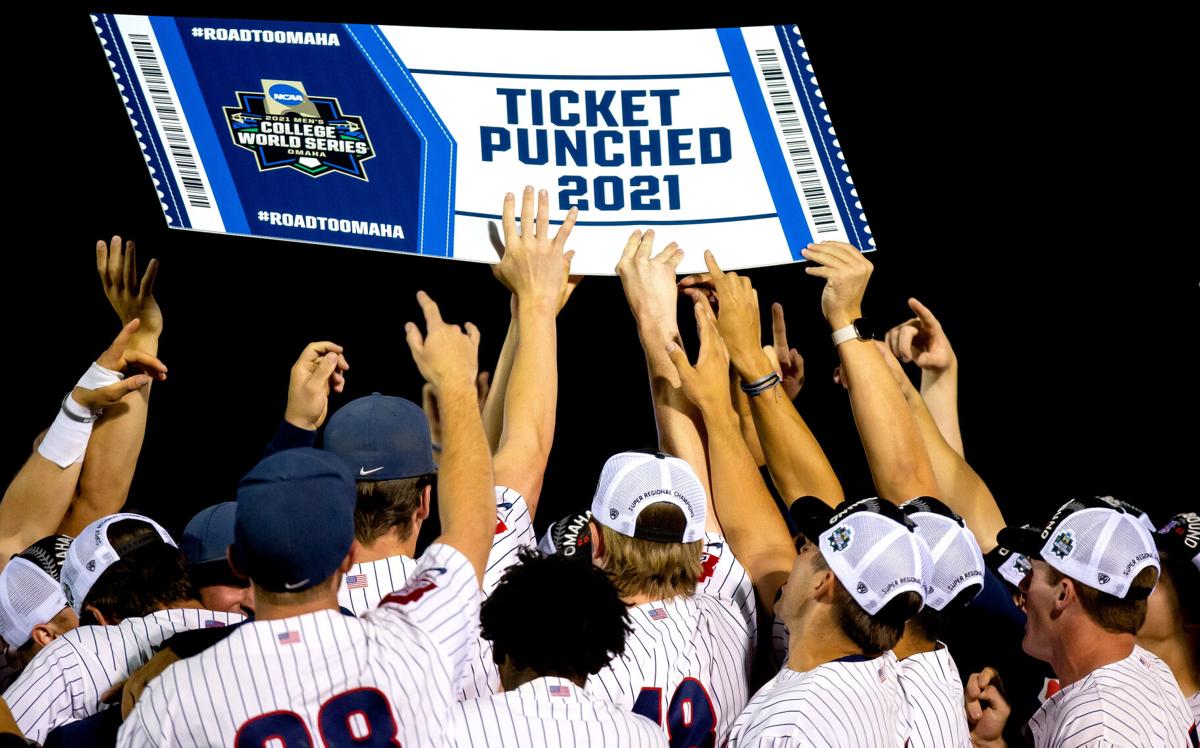 The Arizona Wildcats hold up their "ticket punched" poster while celebrating after their 16-3 win over Ole Miss in game 3 of NCAA's 2021 Super Regionals at Hi Corbett Field, 700 S. Randolph Way, in Tucson, Ariz. on June 13th, 2021. Arizona is headed to Omaha, Neb. for the Men's College World Series.