In assessing the value of a pitcher, wins aren’t what they used to be.

Three of the past four winners of the National League Cy Young Award — Trevor Bauer in 2020 and Jacob DeGrom in ’19 and ’18 — had a collective winning percentage of .553. They didn’t get the most votes because they won the most games. They earned that prize because they had the lowest ERAs or the most WAR.

In assessing the value of Arizona left-hander Garrett Irvin, wins are everything. When he pitches, the Wildcats are victorious far more often than not.

Arizona has a 25-9 record in Irvin’s 34 career starts. When he pitches the day after a loss, the Wildcats are 8-3.

None of it is a coincidence.

“It definitely has a lot to do with (him),” said UA coach Chip Hale, whose teams hosts No. 1 Oregon State in a three-game series starting Friday night. “That means the team is scoring runs, and there’s a reason they’re doing that – because he’s getting them off the field.”

Irvin is one of six seniors who will be honored before Saturday’s game, which likely will mark his final start at Hi Corbett Field. The native of Corona, California, is having his best season, posting a career-low 2.79 ERA with a 1.13 WHIP. He has only 48 strikeouts in 71 innings. But he has allowed only 10 extra-base hits. Irvin keeps batters off-balance by mixing pitches and locations.

He credits his teammates for the club’s success when he takes the mound.

“I don’t think it’s anything I do,” Irvin said. “As a team, we all hate losing that first game. It definitely stinks losing (on) Friday. But if there’s one positive it would be that we all ... come in with a fire under us. We know we can’t lose the Saturday game. Everyone just ends up playing better, including me sometimes.”

Teammate and fellow pitcher George Arias Jr. believes another factor is at play.

“He’s just such a lovable dude,” said Arias, who also will participate in the senior ceremony. “He’s always positive. His energy around him just brings up others, especially in times when you need it the most.”

Irvin, 23, discussed his greatest Hi Corbett moment, growing up in a household with two physical-education teachers, the pitcher he admires most and a handful of other topics in an interview with Tucson media Wednesday. The conversation has been lightly edited.

Saturday probably will be your last home start. What is your fondest memory of playing at Hi Corbett Field?

A: “The fondest memory would have to be the Santa Barbara regional. (Irvin threw a three-hit shutout last spring against the Gauchos, notching a career-high 10 strikeouts). It was a really special thing for us to host a regional and host a Super. It was the COVID year before, and that was my first year here. Now fighting for a playoff spot — I think I realize how special that was last year, being able to do both.

“It’ll definitely be bittersweet this weekend, the last game here. I was thinking about it all week. I’ll miss this place.”

A: “I loved it, but it was more of, I didn’t want to take away from Dan (catcher Daniel Susac) and Tanner O’Tremba had that catch (a running grab to end the fifth inning). The guys know how I feel about it. I want it to be more of a team thing.

“They joke around. They always call me ‘Hashtag Gary.’ I never wanted to take away from Dan and the offense we had and all the defensive plays. This year too. That I’ve been able to pitch so well is because of them.”

What was it like growing up as the son of two middle-school PE teachers?

A: “It was good. My mom ... she’s kind of shy, kind of nicer. I’d love having her as a teacher. I was never her student, but I could just tell — she’s super nice, and she doesn’t like yelling.

“My dad’s the complete opposite. I had him for two years, and he loved guys that were active, athletic. And if you weren’t, and you messed around during his class, he would yell at (you). It kind of sucked for me because sometimes it was my friends.”

When did you discover that you had a talent for baseball?

A: “It was early on with my dad playing baseball in college and high school. (Irvin’s father, Gary, was a left-handed pitcher for Cal State San Bernardino.) I was always playing baseball. It was probably middle school, I started to notice I was better at pitching than I was at hitting. Mostly because I struck out all the time.”

What pitcher do you model yourself after? Whose game do you admire?

A: “Clayton Kershaw. Definitely not his early years, when he was throwing 97. But now when he’s throwing 90, 91, 92. He’s just super competitive — always wants to win. It’s not about the money and all that stuff for him. He wants to win, and he wants the team to do well.”

Kershaw’s your favorite, but you grew up as an Angels fan. Did you happen to see Reid Detmer’s no-hitter Tuesday night?

He’s a lefty, and he had only two strikeouts. Remind you of anyone?

A: “That’s why it was funny watching. I was joking with Chandler Murphy and Javyn Pimental, my roommates. I was like, ‘Oh, that’s kind of like my games.’”

Besides Irvin and Arias, others expected to participate in the senior ceremony are pitchers Holden Christian, Jonathan Guardado and Quinn Flanagan; and outfielder Blake Paugh.

Infielder Jack Grant reinjured his knee at USC in almost identical fashion to the way he first hurt it at Cal in early March — spraining it on a swing. Grant will be out this weekend but could be back for the final regular-season series at Oregon next week.

Second baseman Garen Caulfield missed time last weekend because of a flu bug that’s been going around the clubhouse. Caulfield had to sub for Grant after he got hurt and should be good to go for OSU.

Right-hander Dawson Netz remains out because of an arm injury. He could be available for the May 25-29 Pac-12 Tournament.

The Pac-12 has released the bracket for the tournament. The eight teams will be divided into two divisions in a double-elimination format. The No. 4 seed will face the No. 5 seed at 9 a.m. at Scottsdale Stadium. The game between the No. 1 and No. 8 seeds will begin 45 minutes after Game 1 has concluded. The second session features No. 2 vs. No. 7 at 4:45 p.m., followed by No. 3 vs. No. 6. Arizona currently is tied for third place.

The Wildcats third baseman has dealt with the death of his father and a shoulder injury this season; UA visits USC this weekend.

The Wildcats suffer an 11-7 defeat in their final non-conference game of 2022.

Arizona’s other Susac — Anthony, aka ‘Tonko’ — has found his comfort zone

The freshman right-hander has pitched his best ball of late; plus: updates on the Wildcats’ bullpen.

The Cats take three of four from the Wolf Pack; home game vs. Grand Canyon is up next.

Arizona pitcher Garrett Irvin threw eight strong innings, but UA was held scoreless for the first time in over 200 games.

Nichols, who had been struggling recently, allows four runs over seven innings; Mac Bingham and Garen Caulfield each drive in a pair of runs.

Marlins get to Mark Melancon, Diamondbacks with big inning

The Marlins avoided a three-game sweep and won for just the second time in their past 11 games. The D-backs had their three-game winning streak snapped.

Cats face monumental challenge vs. No. 1 Oregon State, which has ‘everything'

The Wildcats host the top-ranked Beavers in the final home series of the season; plus: George Arias Jr. reflects on his UA career.

'That's why they're so good': Top-ranked Beavers pull away from Cats, takes series opener

‘We have a lot of fight’: Arizona rallies to win series against No. 1 Oregon State

The Wildcats have clinched an above-.500 record in Pac-12 play – making it highly likely they’ll make the field of 64. 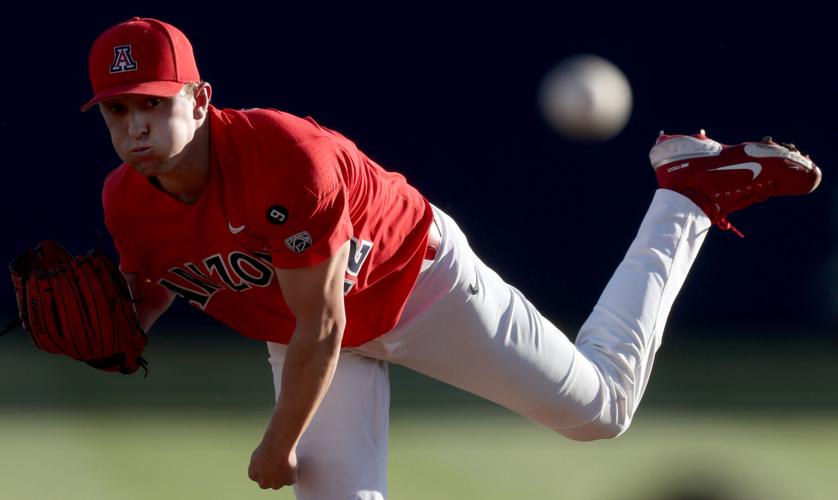 Garrett Irvin throws against Dixie State during the Wildcats’ May 29 game at Hi Corbett Field. The veteran left-hander will be honored this weekend as part of Senior Night. 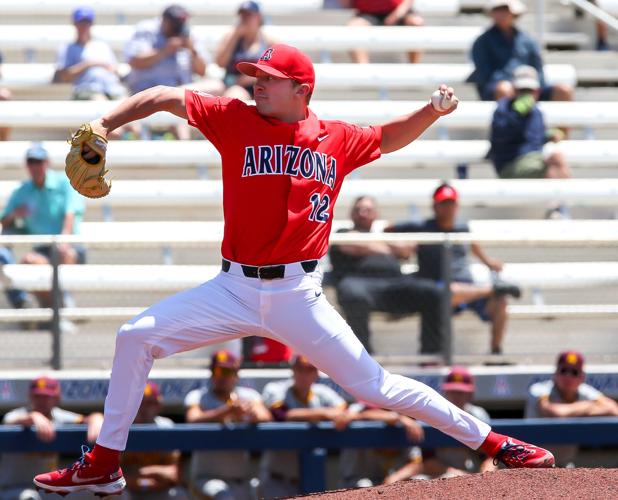 Arizona pitcher Garrett Irvin (12) pitches during the top of the second inning in Arizona Baseball’s 14-4 win over ASU in game three of their series at Hi Corbett Field in Tucson, Ariz. on April 24, 2022.