Wildcats have ‘special’ potential for 2021 baseball season, but will need leadership and sacrifice
Share this
1 of 2 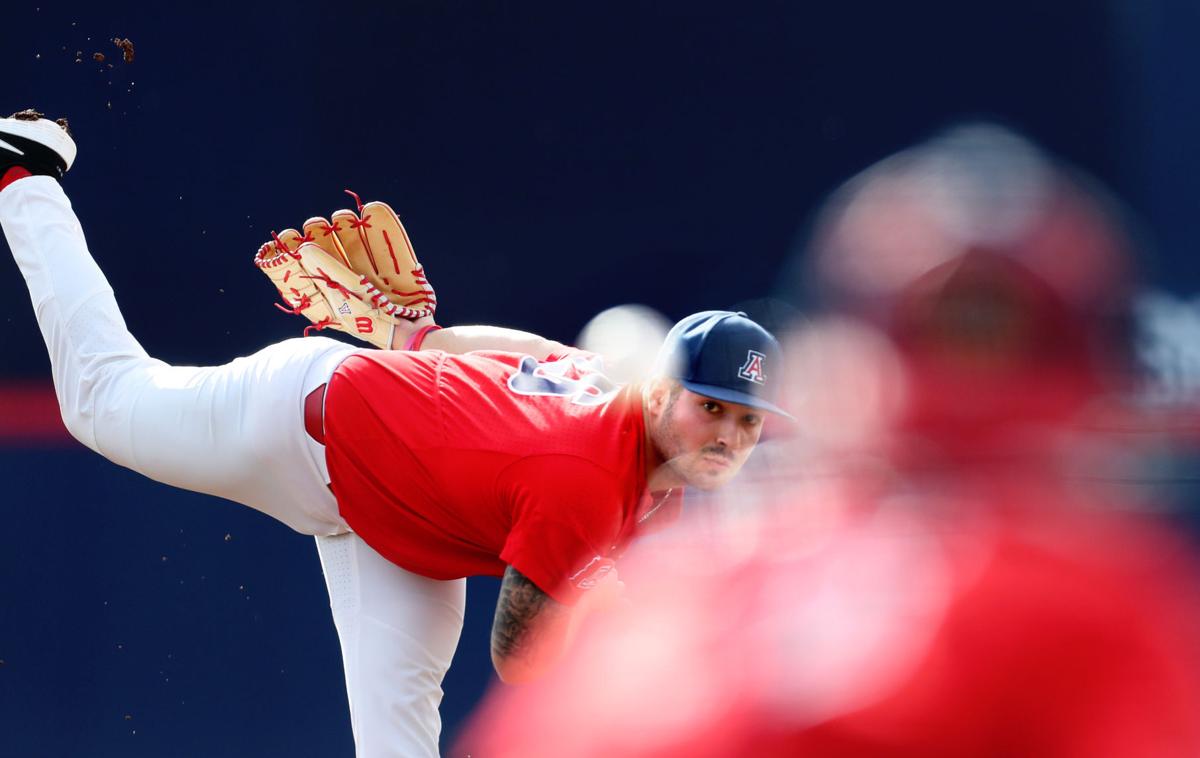 UA right-hander Vince Vannelle is taking on a leadership role during the coronavirus pandemic. “We all want to win a national championship That’s our main goal,” he said. 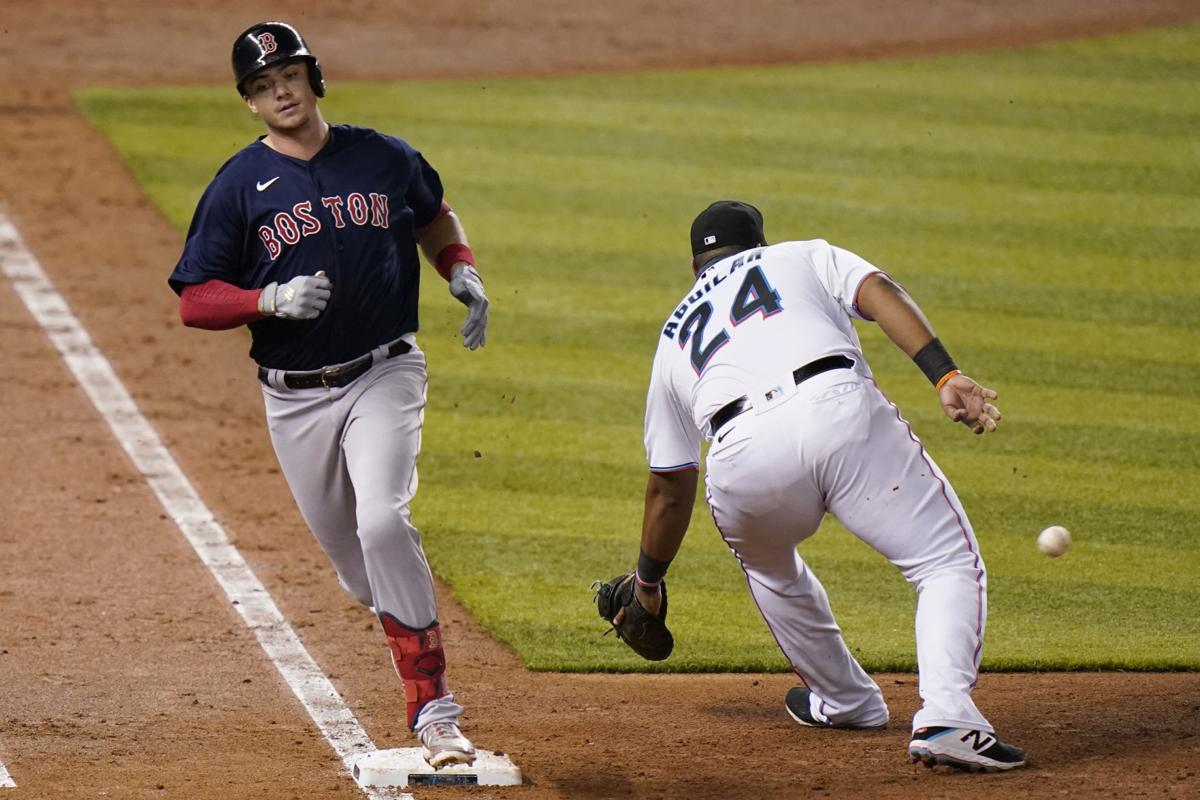 Former Arizona Wildcat Bobby Dalbec made his big-league debut this year for the Boston Red Sox.

Quietly and respectfully, the Arizona Wildcats baseball team began fall practice last Friday at Hi Corbett Field. They were overshadowed by the UA football team, which started its delayed fall camp the same night. They couldn’t have cared less. They were truly happy to be there.

“The thought that we would all be out there playing baseball again under the lights, it was just crazy,” senior right-hander Vince Vannelle said. “Because it felt like we were back to normal almost.”

Almost. The Wildcats still have to follow pandemic protocols. They’re wearing face coverings. They’re utilizing the fields near Hi Corbett to spread out. They’re getting tested twice a week for COVID-19.

They’re taking it all seriously because they know how easily the game can be taken away. Arizona was 15 games into a promising season when the coronavirus threw up the stop sign.

To help make sure his team is doing the right things on and off the field, UA coach Jay Johnson is leaning on veteran leaders such as Vannelle and fourth-year outfielder Donta’ Williams. They set the tone immediately in a Zoom call after the team returned to Tucson in August.

“We began to talk about why we’re here,” Vannelle said during a video news conference Thursday. “We all want to win a national championship. That’s our main goal. Everything else is just a distraction at this point.

“So if you’re not on board, we’re going to will you to come and join the train. Because I feel like this is gonna be a very special season for us.”

Arizona landed at No. 12 in Baseball America’s projected Top 25 for 2021. The publication ranked the Wildcats’ recruiting class as the fourth-best in the nation.

Sacrifices will be required to validate that promise. Vannelle and Williams already have made some. Both lost professional opportunities when the MLB draft was shortened and free-agent signing bonuses were capped.

They returned to campus with a singular purpose and a heightened awareness of what’s required of them and their teammates. As Williams put it, “We don’t want anybody or anything to happen to us to put (the season) in jeopardy.”

“You have to be aware of why you came here,” he said. “There are times you have to be stuck in your house. It just (illustrates) how much baseball really means and having a season really means … just making sure your life is straight to be able to go and compete.”

Johnson said it’s a “big deal” to have vets such as Vannelle and Williams on the team. Seniors have been sparse on Johnson’s squads at Arizona. But the truncated draft and the NCAA’s decision to extend the eligibility of seniors impacted by the spring stoppage created a unique dynamic. Vannelle, Williams, right-hander Preston Price and veteran shortstop Jacob Blas wouldn’t be here otherwise.

“As a coach that appreciates experience, appreciates leadership, it’s very valuable to have Donta’, Vince, those guys in the fold,” Johnson said.

“They’ll be extremely critical in our team’s success. Their ability to lead, their ability to set good examples and build good rapport with the younger players will go a long way in determining how successful this team is.”

As of now, the Pac-12 Conference is planning to play a typical baseball schedule next year — 56 regular-season games per team starting in mid-February.

That’s subject to change, of course. The best-laid plans for college football have been waylaid repeatedly. The college basketball schedule remains a work in progress.

“The advantage we have is, baseball’s a naturally socially distanced sport. We’re outside,” Johnson said. “There’s some questions to be answered as far as testing and those types of things. But … we have been told to plan to proceed as normal.

“We’re all very realistic and understanding that that could change at any moment. Right now, we’re hopeful to play the schedule as we have it outlined.”

Two of Johnson’s former players made their MLB debuts this year: corner infielder Bobby Dalbec and outfielder Jared Oliva. Both played pivotal roles for the 2016 team that fell one win short of the College World Series championship.

Dalbec started the final game that year — on the mound. He became a full-time hitter in the Boston Red Sox organization and socked eight home runs in 80 MLB at-bats. His willingness to play both ways at the UA left a lasting impression.

“What he did for us on the mound, his willingness to sacrifice maybe what was in his best interest at that time for the good of that team, it wasn’t just getting to the College World Series,” Johnson said. “He’s really set us up well in terms of future possibilities in recruiting two-way players.

“This guy’s a potential future All Star hitting in the middle of the order for the Boston Red Sox and was one of the best pitchers in the country that year.”

Oliva took a different path. He was a late bloomer who redshirted as a freshman and didn’t develop into a certain pro prospect until his fourth season, in 2017.

“He just is a special person all the way around — character, work ethic, perseverance,” Johnson said. “And a great example. If you had a team full of guys like Jared Oliva, you would be very successful.”

Oliva appeared in six games for the Pittsburgh Pirates. He had three hits in 16 at-bats, plus one stolen base.

The lost season: How 5 ex-Wildcats are dealing with a summer sans minor-league baseball

Catching up with five former Arizona players whose professional careers have been disrupted by the coronavirus pandemic.

Blas from the past: Arizona shortstop feels like himself again after series of stoppages

Jacob Blas has endured one disruption after another since early in 2019, but he’s back playing the game he loves.

QB Davis Mills, Stanford willing to do 'whatever it takes' during football season unlike any other

Davis Mills, a former five-star prospect, is expected to start at quarterback when the Cardinal opens its season Nov. 7 at Oregon

The UofA has five viable running backs, including freshmen Frank Brown Jr. and Jalen John; getting them all involved is the tricky part.

UA right-hander Vince Vannelle is taking on a leadership role during the coronavirus pandemic. “We all want to win a national championship That’s our main goal,” he said.

Former Arizona Wildcat Bobby Dalbec made his big-league debut this year for the Boston Red Sox.