Jay Johnson recalled being “heartbroken” when he heard the news: Branden Boissiere was headed to USC.

The Arizona Wildcats coach had been recruiting Boissiere, a left-handed pitcher and outfielder from Riverside, California, since he was 15 years old. But Boissiere picked the Trojans. That’s how it goes sometimes.

So how did Boissiere end up in Tucson after all?

He underwent Tommy John surgery as a sophomore at Woodcrest Christian High School. While on a family vacation in Wyoming, Boissiere got in an ATV accident. He broke his right ankle, among other injuries.

“I was out of baseball for a little bit over a year,” Boissiere said. “It took a toll on my body.”

USC rescinded its scholarship offer, according to Boissiere. He called Johnson to see if he was still interested. He was. Johnson flew to Riverside to visit with Boissiere and his family. Johnson didn’t offer him a scholarship. But Boissiere knew he could go someplace where he’d be wanted.

“I’m very blessed to be here,” said Boissiere, the reigning Pac-12 Player of the Week. “I love playing here under Coach Jay. This is the best decision I’ve ever made in my life. I don’t regret anything. I think everything happens for a reason.”

It’d be difficult to find a hitter who looks more at home in the batter’s box than Boissiere. After going 13 for 20 last week, the third-year sophomore is hitting .483. He has two home runs and 10 RBIs — and only two strikeouts — in 29 at-bats.

“It was just a matter of time,” said Johnson, whose team faces Oklahoma in the opener of the Frisco College Baseball Classic on Thursday in Frisco, Texas.

“He’s got a great competitive nature about him in the box, has really good hand-eye coordination and a feel for hitting. I don’t think maybe he’s got as much credit for how good he is, and that’s really only because the season got stopped last year. He was taking off as we were finishing up.”

Boissiere ended the abbreviated 2020 season on an eight-game hitting streak that raised his average from .200 to .327. As a freshman in 2019, he batted .336 with a .430 on-base percentage. He just happened to be one of many prolific hitters in a loaded UA lineup.

Now Boissiere is a fixture in the middle of the order — and at first base. After arriving at Arizona as a pitcher/outfielder/first baseman, Boissiere has found a defensive home as well. He has become an asset at first, regularly averting errors by picking throws out of the dirt.

Johnson wanted to “shrink the focus” for a handful of players by assigning them to one position, and it appears to have helped Boissiere and second baseman Kobe Kato, who’s hitting .357 and has yet to commit an error.

“Not having all these different things going around in my head about different positions, when I’m going to play, where I’m gonna play, it really helps me to be at ease,” Boissiere said.

Although he’s no longer a pitcher, Boissiere still thinks like one, and that helps him at the plate. He’s adept at working counts, hitting with two strikes and using the whole field. When he gets his right foot down on time, he’s able to square up fastballs and adjust to breaking pitches.

“It’s definitely nice to not have to pitch to him every single day,” UA right-hander Quinn Flanagan said.

“He’s just a very mature hitter. He kind of thinks along with you as a pitcher. There’s not a lot that’s going to fool him. He’s gonna get a good swing off on a lot of pitches.”

Boissiere models his game after Freddie Freeman, the 2020 National League MVP. The Atlanta Braves first baseman has a bigger frame — he’s listed at 6-5, 220; Boissiere is 6-1, 215 — but Boissiere admires Freeman’s determined approach at the dish.

“I just like how he takes tough at-bats,” Boissiere said. “He’s a very tough out, and I feel like that’s how it is for me too.”

The Frisco Classic represents the Wildcats’ first and only set of games away from home during the nonconference portion of the season. Johnson and the team have adjusted their travel regimen to mitigate risk amid the coronavirus pandemic.

The UA took two buses instead of one to Tucson International Airport on Wednesday morning. The traveling party wore N95 masks on its flight to Dallas. All meals will be delivered to the team hotel, where players are encouraged to stay in their rooms as much as possible.

“We’re gonna give it our best effort,” Johnson said. “Our players should be commended to this point in terms of how they’ve handled this. There’s a reason we haven’t had outbreaks and those sorts of things, and we’ll just need to continue doing that outside of Tucson.”

Johnson said the Wildcats have experienced “very little drama” regarding COVID-19 since they began practicing in late January. He credited the players for taking the matter seriously and adapting to new routines, including minimizing time in the locker room. Flanagan said his daily schedule is limited to workouts on campus, class at home and baseball at Hi Corbett Field.

“It took some getting used to,” Flanagan said. “But that’s the routine now, and that’s what we’ve been doing.”

It’ll be about the same on the road.

“Just staying on the straight and narrow, sticking to the plan, not going to each other’s rooms and hanging out,” Boissiere said. “Ultimately, it’s a business trip when we go to Texas. We’re there to get a job done.”

Right-handers Trevor Long and Quinn Flanagan emerge as possible alternatives to the closer combo of Vince Vannelle and Preston Price, who can’t pitch every game.

The Wildcats freshman has impressed his teammates and UA coach Jay Johnson with his work behind the plate.

Down 9-3 after three innings, UA scored four times in both the fourth and fifth, twice in the sixth to go up 13-11, and then six times in the seventh to break the game open.

The UA baseball team hammered Oklahoma 12-1 on Friday in Frisco, Texas, to stretch its winning streak to seven.

Tickets for UA baseball will be offered first to season-ticket holders based on Wildcat Club priority points; the sale will begin at 9 a.m. Tuesday.

Arizona leads the nation in walks drawn – and has more bases on balls than strikeouts – entering its home series against Wichita State.

The UA defeats Wichita State 8-5 behind a solid start from Chase Silseth and another strong finish by Preston Price.

The Cats commit a season-high five miscues in losing to the Shockers 10-9; it’s the UA’s first defeat since Feb. 21.

The UA loses to Air Force 5-2, mustering a season-low four hits and finishing the game without its coach. 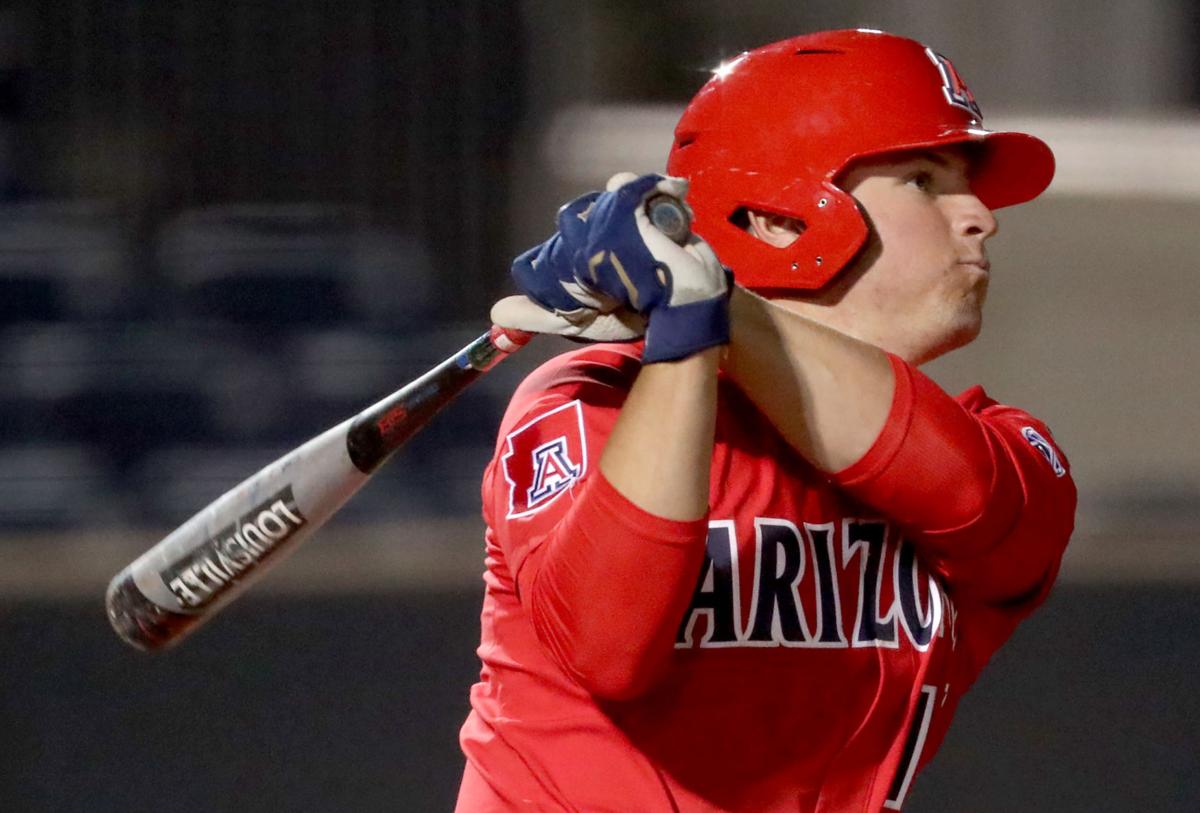 Arizona’s Branden Boissiere watches his homer clear the fence in the fourth inning of Friday’s game against Southeastern Louisiana. He has two homers and 10 RBIs in 29 at-bats. xxxxx 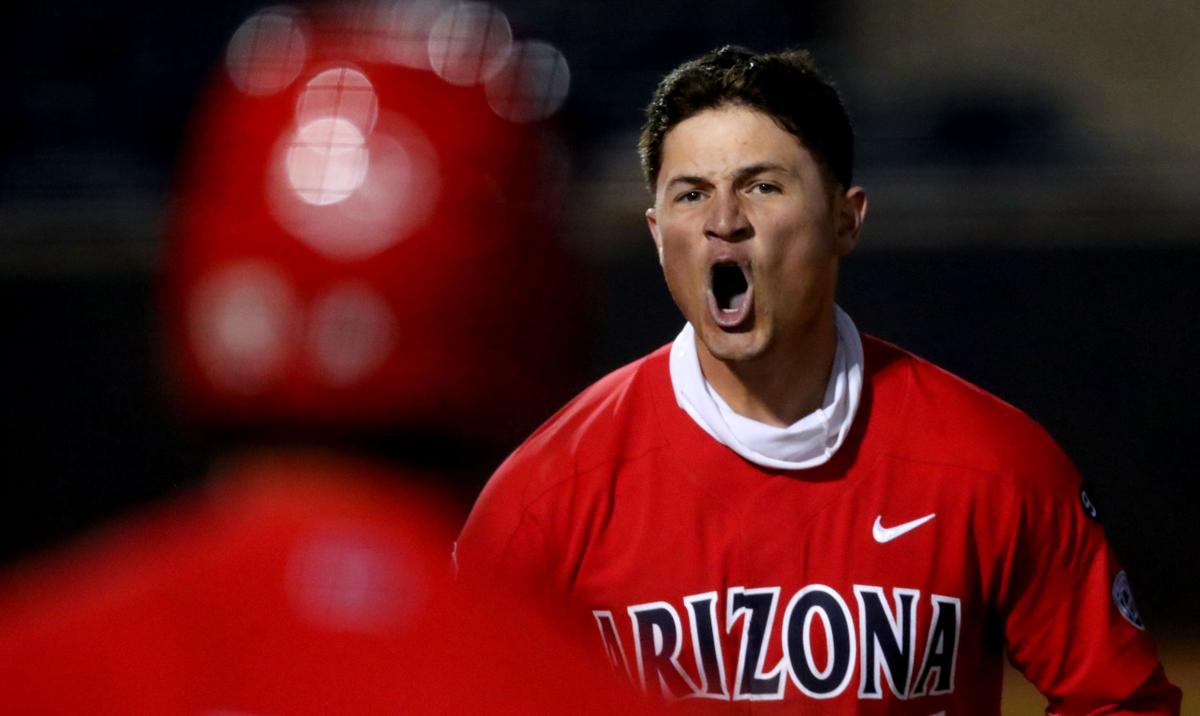 Boissiere is playing first base exclusively after beginning his college career as an infielder, outfielder and pitcher. The single-position focus “really helps me to be at ease,” he says.