Jay Johnson is spending this unexpected and indefinite break from baseball exactly the way you’d expect him to:

He’s trying to make the best of it.

With no live sports to put watch in his home office, the Arizona baseball coach has been breaking down replays of the Wildcats’ games from the truncated 2020 season. Specifically, he’s been scrutinizing the at-bats of the players who are expected to be back and have prominent roles next season.

“Society has changed right now for all of us,” Johnson said. “It’s just like anything — your life is based on your attitude. You can choose to make it productive or not. Everybody in our organization, we’re pushing them to make it as productive as they can.”

The coronavirus pandemic forced the cancellation of the entire NCAA spring sports calendar. Johnson’s team played only 15 of 56 regular-season games. Most of his players have returned to their hometowns to complete the spring semester via online instruction. No one knows when their next opportunity to play the game they love will come.

Johnson delivered the disheartening news to the team on Thursday, March 12. Arizona was supposed to have started Pac-12 play against Oregon State the following day.

Johnson firmly believes the best was yet to come for the ’20 Wildcats. They were 10-5 when the season was halted and had won five of seven games, including a victory at Texas.

For it all to end so abruptly was difficult to stomach. But in the succeeding days, Johnson has come to accept the new reality. He and his staff have been in regular contact with the players about next steps, whatever those might be. Plans already are being formulated for the 2021 season.

In a recent phone interview with the Star, Johnson discussed the sudden ending of this season, how he and his players are coping without baseball and what lies ahead. A portion of that conversation can be found below. It has been lightly edited for context and clarity.

Other coaches have said that delivering that season-over message to their teams was maybe the hardest thing they’ve ever had to do. How was your experience?

A: “It was tough in that moment, knowing there’s literally nothing you can say to the team that will make the situation better. We all understand and support the necessity of canceling the season. But in that particular moment, I know how disappointed our players were.”

What was the gist of the message?

A: “Word had leaked out that all the spring championships, including the College World Series, were canceled prior to us meeting. So I believe our players knew what was coming. I just expressed gratitude for their efforts and tried to convey some message of hope. Our targets, our goals, aren’t changing; we’re just being delayed a little bit.”

A: “There were a lot of emotions going through the players that day. I think they were based around some confusion, uncertainty, disbelief, disappointment. It was just a really quiet locker room.”

What kind of questions have players been asking you in subsequent conversations?

A: “We’ve kept it away from hypotheticals. What can we control? We really turned our focus to making sure that they’re all as safe as they can be, as healthy as they can be and really in a good place to get restarted academically with all the instruction moving online.”

These guys live, eat and breathe baseball. How do they stay involved in the game without being able to play or practice as a team?

A: “A lot of them have places to work out in their own homes. That’s been kind of common theme, whether it’s a batting cage or (a) garage. Coach (Jim) Krumpos, our strength coach, has been awesome through this whole thing. We have a body-weight workout thing that guys can do if they don’t have access to anything. And there’s a good portion that don’t, because we’re all trying to do our part so we can we can get this thing under control.”

How would you describe the suddenness of the season just … ending?

A: “It was crazy. Unprecedented, really, is the only word I can come up with. Just kind of thinking back to where we were, we were coming off a good week, winning at Texas. We won a series against Houston. We’d had a couple good practices preparing for the Oregon State series, and then boom, it’s over.

“Given the circumstances, honestly, we really haven’t had time to say, ‘Hey, can you believe it’s over?’ There’s just a lot going on. And there’s a big-picture thing where society needs all of our help, and right now that’s more important.”

Where do you think the 2020 season was headed for your team if things had just kept going as normal?

A: “I really liked where our team was heading. We were pitching much better (3.87 ERA). I think we were at the point where we were getting the right pieces in place defensively.

“When you look up at the end of the day, we were still the best scoring offense in the Pac-12 (7.53 runs per game). And it was my belief that we were really just starting to hit our stride there.

“Probably most importantly, I just really liked the team dynamic. I thought it was really strong. I felt like our players were responding to adversity well. We followed any loss with a really strong performance the next day. I just think there was tremendous growth in every area.”

What was your reaction when they announced that they were canceling the College World Series, which was scheduled for mid-to-late June?

A: “My first reaction was disbelief. As of (two weeks) ago, you’re kind of building your whole life around that. But then when you see the NBA, Major League Baseball, the NHL, the NCAA basketball tournaments are being canceled, you kind of expected it. And now knowing what we know about the coronavirus, all of it makes sense.”

This is your livelihood. There must be a void for you not being able to coach. How are you coping with that?

A: “The best way I cope with any season ending is to really move on to what is next. This has been a little different. There’s some things out there that we’re gonna know a lot more about in a month’s time. But it’s really been the same. It’s just been communicating with our players, communicating with our recruits over the phone, making sure everyone’s safe.

“We had a Zoom meeting with our entire team (Friday) morning. It was great to engage with those guys and see their faces and talk through a couple of things. … I enjoyed that. And it looked like they enjoyed that as well. So that’s something that we’re going to continue to do.”

The NCAA has said that spring-sport participants might be able to get a year of eligibility back. What do you think about that idea?

A: “It’s just the right thing to, to give the players their year back. It sounds like there are still some questions that need to be answered in regard to how that all works. But I’m for it.”

If the MLB draft happens this year, would you expect the top-level players to just leave at this point?

“But I’m looking at it as I would any other year. We have good relationships, good communication flow with our players. The more information that we get in the coming weeks, it makes it more prudent to have those conversations (then).”

We don’t know what’s going to happen with summer ball either, right?

A: “That’s not known. I’ve talked to a few summer GMs and coaches. They say they’re getting bombarded. My hope is that leagues can go off as planned, because that means we’re in a good place society-wise. If that’s able to go, that’s probably a good thing for everybody.”

The ex-Wildcat couldn’t resist the lure of Philadelphia, where he’ll have a chance to win and impact a troubled community.

Friday nights were our night. 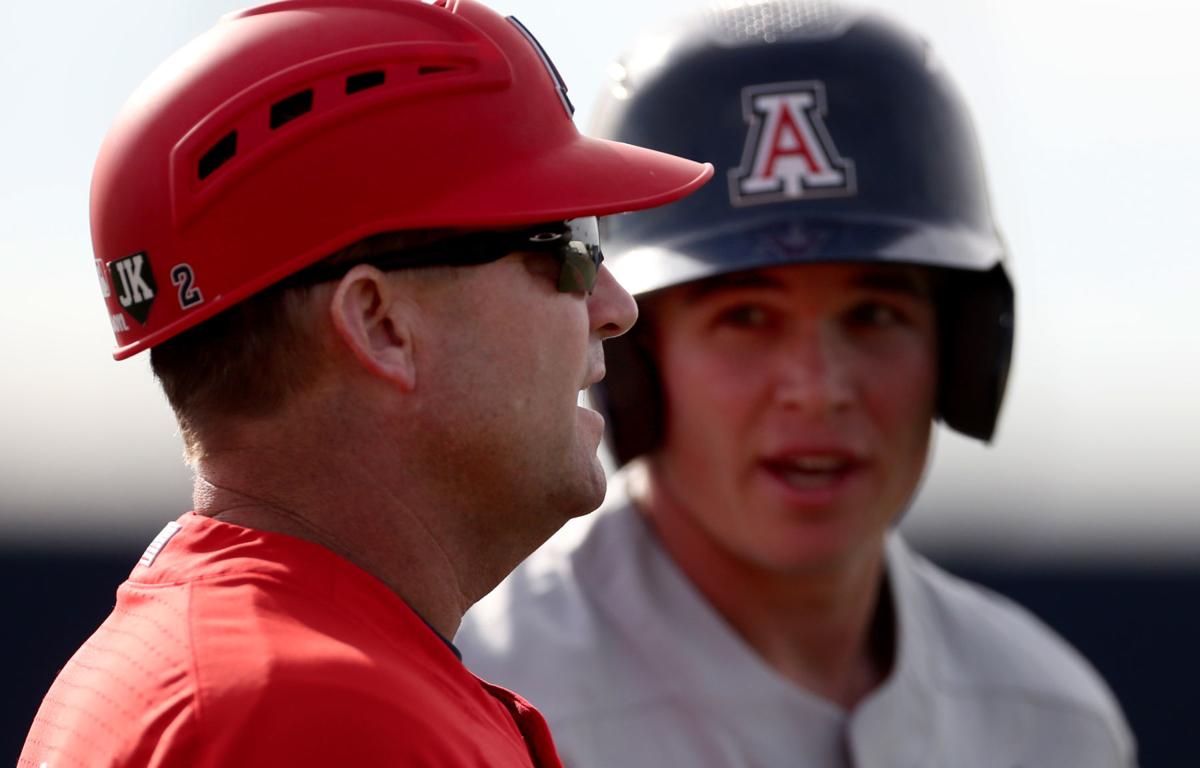 “Our targets, our goals, aren’t changing; we’re just being delayed a little bit,” said UA head coach Jay Johnson, left, of the season being shut down to the coronavirus. Arizona had a 10-5 record this season. 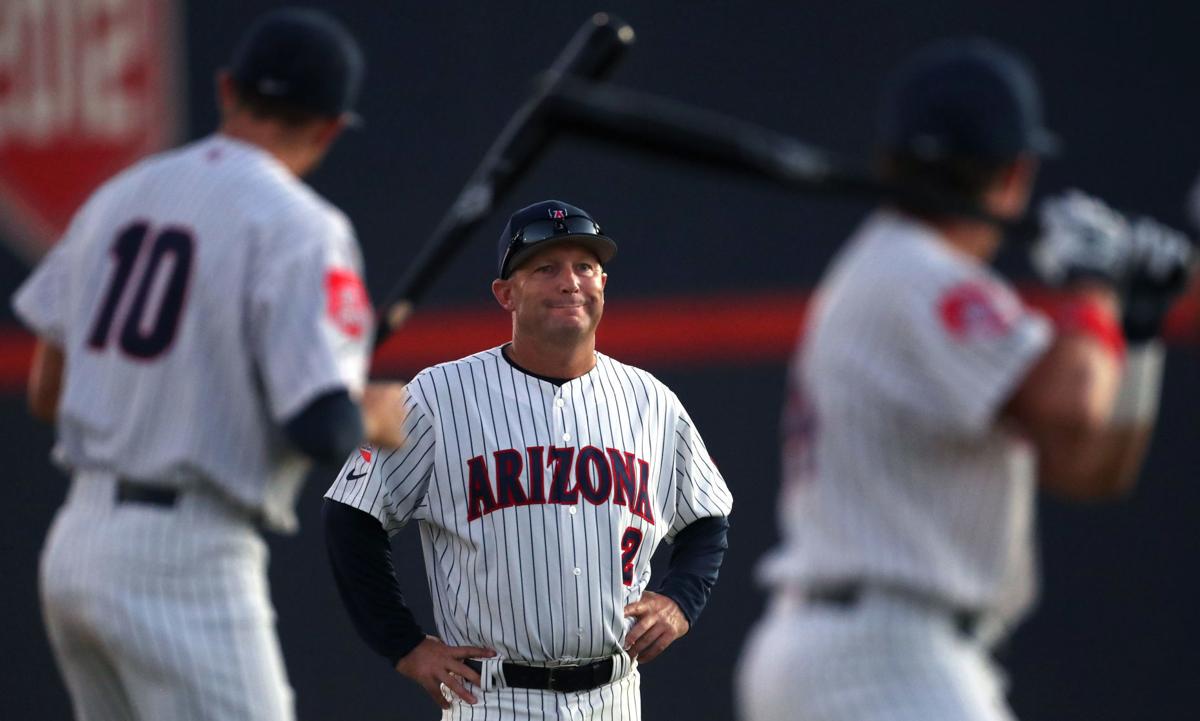 “I really liked where our team was heading,” said UA head coach Jay Johnson, center. “I just liked the team dynamic. I thought it was really strong.”