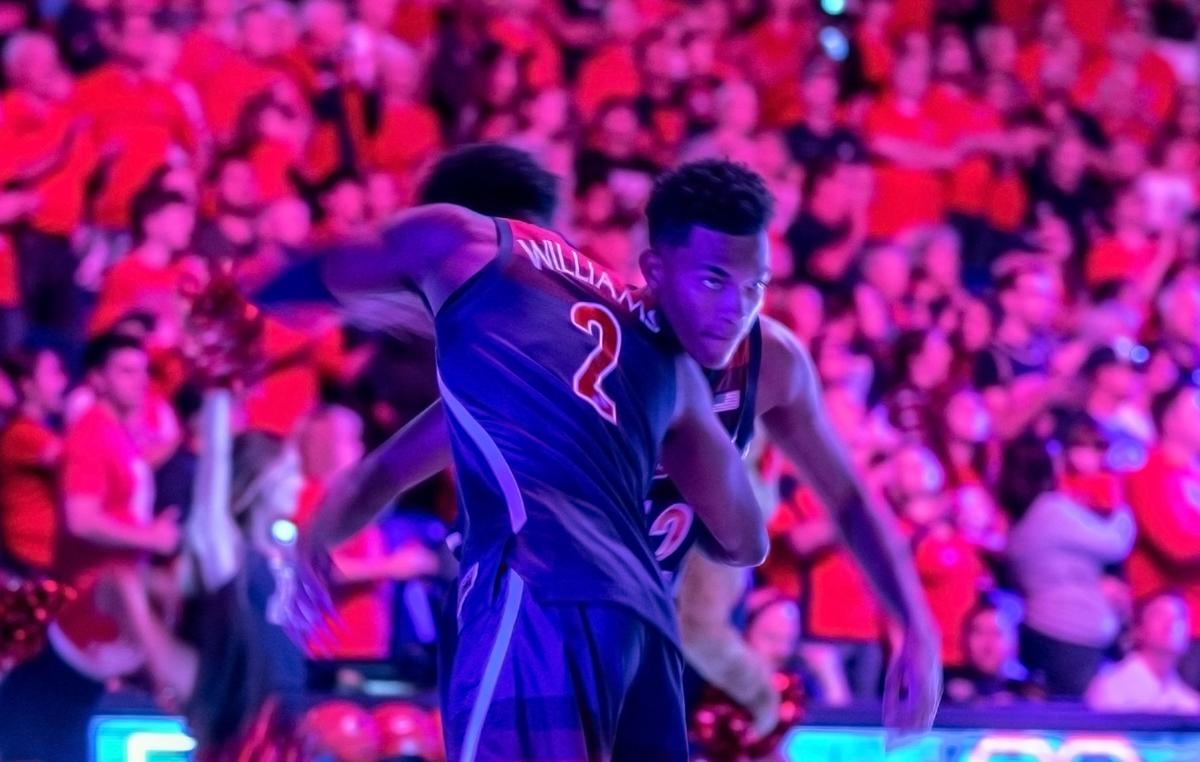 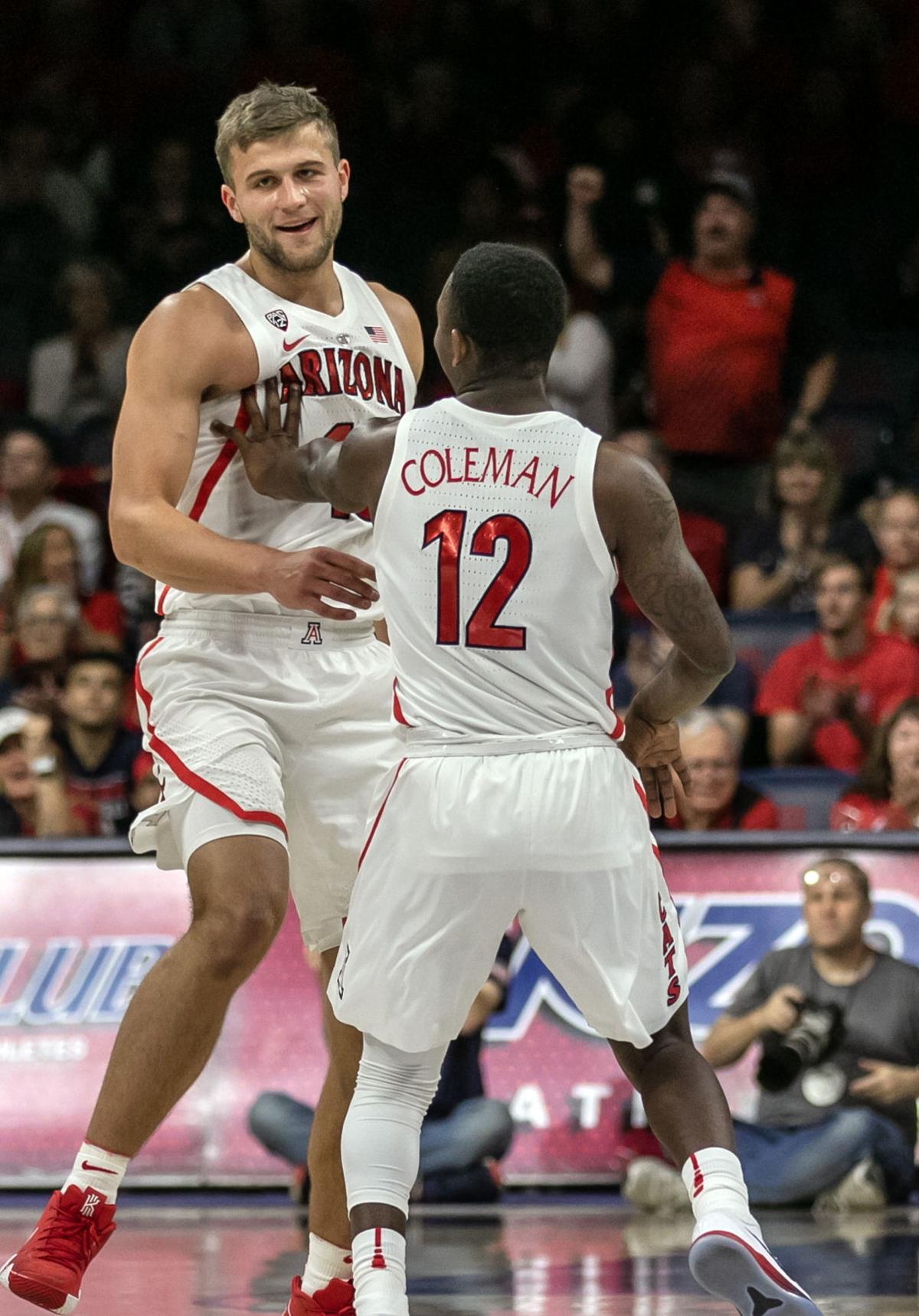 Justin Coleman gives teammate Ryan Luther a playful, congratulatory shove during Sunday’s win over Cal Poly. Chemistry will be key for a team that must replace all five starters.

Co-captain Justin Coleman starts his interview sessions with a religious expression of thankfulness. His mostly soft-spoken teammates, when asked about their own success, often praise each other instead.

And their coach calls the Arizona Wildcats a “great group of guys.”

“My teammates did a good job of finding me within the offense tonight, and I’m just kind of taking it game-by-game at this point … not really too focused on career-highs or anything of that nature. … The biggest thing that’s most important to us is winning games, so we’re trying to follow up with another win here on Wednesday against UTEP.”

Arizona’s five previous starters are off to various forms of professional basketball this season, leaving the Wildcats unranked and largely off the radar.

The UA’s current roster is still developing chemistry, which will undoubtedly be tested next week in the rugged Maui Invitational.

UA coach Sean Miller says he does know this after offseason workouts, two exhibitions and two regular-season games: His players are doing what they’re asked to do.

“We have a great group of guys,” Miller said, after the UA beat Cal Poly 82-61 on Sunday. “They’ve worked hard from Day 1. I think all of them are out to prove that our team is better than maybe the outside world thinks.

“Whether that’s true or not remains to be seen, but collectively they have worked. There’s some guys who have had four or five straight months of a lot of hard work, in the weight room, shooting the ball, not just in our team practice, but things they’ve done individually.”

The outside world picked the UA to finish fourth in the Pac-12 this season — a pick even Miller said was probably too high — and doesn’t have them in The Associated Press Top 25. They received two votes in the poll, though it may be of small consolation that Buffalo, their NCAA Tournament nemesis last season, made its first-ever appearance in the rankings on Monday.

But behind the team goals, Miller said, are a bunch of individuals who are looking to prove themselves after living in the shadows of Deandre Ayton, Allonzo Trier, Rawle Alkins, Dusan Ristic and Parker Jackson-Cartwright last season.

“Our freshman class from a year ago — Brandon Randolph, Emmanuel Akot, Alex Barcello, Ira Lee — they gained a lot of experience and they’re hungry and eager to prove that they’re each a better player than they were a year ago,” Miller said. “I know with Brandon Randolph, you really see that because of his scoring, but I think the other guys are as well, they’ve gotten better.”

On Sunday, Lee quickly established himself as a key post reserve, as expected, following his one-game suspension. He had a game-high eight rebounds in just 13 minutes before fouling out.

Akot had four points and four assists, showing the versatility that has locked him into the top eight spots in the playing rotation, while Randolph is the team’s leading scorer so far, with 25 points against Houston Baptist and 10 against Cal Poly.

Lee and Akot, along with junior guard Dylan Smith, are players six through eight in the UA rotation so far.

“I think we have some guys who don’t start the game this year that really contribute,” Miller said. “There isn’t a big, big difference between the starters and I would say three players, maybe four, certainly three, off the bench. They give us a lift.

“Ira is physical, our most explosive big guy who can get second shots, and as Ira plays more and more games he’s only going to get better, and Dylan … We’re getting that punch from those eight.”

Barcello is on the fringe of the rotation at this point, a third-string point guard who can play on the wing. He’s averaging 4.5 points in 27 combined minutes over the UA’s first two games, shooting 2 of 9 overall from the field and 1 of 6 from 3-point territory.

Miller has said Barcello might be the team’s best shooter and is still expressing confidence in him, saying, “He’s another guy who does it every day and it’s just a matter of time.”

Miller said freshman Devonaire Doutrive, the last recruited scholarship player to get in games, is “coming around as well.”

Those thoughts left Miller with another idea.

“All coaches love that, and I think we have the capability of having that here on this year’s team.”

UA shows off full roster in beating Mustangs 82-61 at McKale Center to improve to 2-0.

Dylan Smith is feeling the feedback given by Sean Miller, Arizona's coaches

Slumping shooter has found a way to contribute even when his shot isn't falling.

Houston Baptist was one of the few teams with an open date.

After 'nervous' start, Arizona Wildcats pull away in second half to beat Houston Baptist by 30

UA shows inexperience in first half before outscoring Huskies by 24 in final 20 minutes.

Riders have raised $47 million for the PolioPlus fund since 2009.

Greg Hansen: While others rebuild, Mike Leach — the Palouse Pirate — continues to win

Wildcats will face off against Pac-12's iconoclastic coach Saturday night in Pullman, Washington.

Wildcats will play at No. 8 Washington State on Saturday.

Justin Spears and Dominic Baciocco return to the studio to talk some Arizona hoops, including the Wildcats' rotation through the first two gam…

Loyola Marymount gave Arizona a hard time, but April Phillips knew it would.

Does Sean Miller spit in huddles? Emmanuel Akot tells him it "depends how angry you are."

Williams, Randolph combine for 42 points as Wildcats move to 3-0.

UA shed its curtain — if only for eight minutes — and showed fans and recruits a side to Sean Miller that few are familiar with.

Arizona defense finds moxie in win over UTEP, while Brandons put it all together

Three games into the regular season and it’s still not clear how much scoring Arizona can count on from anyone not named Brandon.

Two games into the 2018-19 season, Arizona women’s basketball coach Adia Barnes has learned a lot about her team.

Justin Coleman gives teammate Ryan Luther a playful, congratulatory shove during Sunday’s win over Cal Poly. Chemistry will be key for a team that must replace all five starters.