Aari McDonald, Adia Barnes and the Arizona Wildcats’ women’s basketball team are bound for the Final Four for the first time in program history after the third-seeded UA beat No. 4 seed Indiana 66-53 in the Elite Eight on Monday in San Antonio.

Arizona (20-5) will face top-seeded UConn (28-1) on Friday for a spot in the national championship game.

All eyes in Tucson were set on the Wildcats to compete at the highest level, including the UA football team that gathered at the Cole and Jeannie Davis Indoor Practice Center to watch the game on a projector screen. Former players a part of the UA basketball fraternity — men and women — showed their unwavering support on social media before and during the game.

On a stage neither school had experienced prior to this season, Arizona received an encore legendary performance from its star guard Aari McDonald, who finished the night with 33 points on 12-for-20 shooting; she added 11 rebounds and four assists; She’s scored in double figures in 91 straight games, the longest active streak in women’s college basketball.

Junior wing Bendu Yeaney, who transferred from Indiana prior to this season, scored three points on just one field-goal attempt but tabbed five rebound and an assist.

Arizona’s game came down to McDonald, who — for the second time in as many games — was up for the task. Her 33 points are the most-ever scored by a Wildcat in an NCAA Tournament, surpassing … well, herself. She scored 31 in Saturday’s upset of Texas A&M.

McDonald also moved ahead of Dee-Dee Wheeler to third on Arizona’s all-time scoring list with 1,990 points. McDonald will most likely finish her UA career steady at No. 3 behind Davellyn Whyte (2,059) and Barnes (2,237).

In the first quarter, McDonald shot 4-for-7 from the field made both of her 3-point attempts. McDonald knocked down her third attempt in the second quarter with a bank-shot at the top of the key while the shot clock wound down.

Reese and Baptiste each grabbed five rebounds in the first half, and Arizona went into the halftime break leading 27-23 — 20 minutes away from reaching another monumental milestone.

Arizona opened up the second half on an 8-4 run with the help from a Baptiste 3-pointer.

Baptiste scored eight of her 12 points in the third quarter

Indiana forward Mackenzie Holmes’ 10 third-quarter points coupled with a two-minute scoring drought by the UA allowed the Hoosiers to stay within striking distance, 46-44 going into the final 10 minutes.

With 2:35 left to play, McDonald appeared to suffer a left ankle injury after getting her foot caught between a defender while driving to the basket. The crowd hushed as McDonald left the floor. Trainers re-taped her ankle on the sideline and returned to the game with just under two minutes to play.

Reese fouled out late, but Indiana couldn’t catch up. The Hoosiers went three-plus minute scoring drought, and the Wildcats were able to squeeze out the win to advance to their first-ever Final Four.

The next opponent will present a herculean task as the Wildcats are going toe-to-toe with top-ranked UConn, a program led by Hall of Fame coach Geno Auriemma. The Huskies are playing in their 13th consecutive Final Four. The Huskies won their region on Monday, outlasting fellow powerhouse Baylor in the final seconds.

Friday’s tipoff time has not yet been announced. Both Final Four games will air on ESPN.

Photos: No. 3 Arizona Wildcats vs No. 4 Indiana Hoosiers in NCAA Tournament Elite Eight

McDonald's 1967 points in an Arizona uniform pushes her ahead of Dee-Dee Wheeler's 1966 points.

NCAA Tournament notes: Fans from near and far cheer on Cats; Adia Barnes the youngest coach in Elite 8

News and notes as the Arizona Wildcats square off against Indiana in the Elite Eight in San Antonio, Texas.

When Arizona and Indiana meet Monday in the Elite Eight, Aari McDonald will be matched against Hoosiers guard Nicole Cardano-Hillary in what should be billed as Mayhem vs. Mayhem.

Timeline: How Arizona turned a pandemic-affected season into an Elite Eight berth

How did Arizona get to this point? Here's a look at the biggest moments of the Wildcats' season:

Adia Barnes has put a new dimension to winning. She has done it in such a charming way that most of the basketball fans in Tucson would cheerfully buy her a cup of Starbucks every day of the week.

Greg Hansen: On one of the UA's biggest days, Adia Barnes, Aari McDonald and Wildcats win the Big One

The sun will never set on what the Wildcats accomplished Monday.

Monday night's win — and ensuing celebration — is exactly what Aari McDonald envisioned when she decided to forego the WNBA draft last April and return to school for one more year.

By the numbers: Here's how the Wildcats beat Indiana, earned first-ever spot in Final Four

Third-seeded Arizona used a dominant fourth quarter to beat No. 4 seed Indiana in the Elite Eight 66-53 on Monday night. The Wildcats will face UConn in the Final Four on Friday.

Miller tells the UA women's team "we're with you" while congratulating them on their success.

Aari McDonald averaged 25.3 points and 6.8 rebounds per game in Arizona's run to the Final Four. 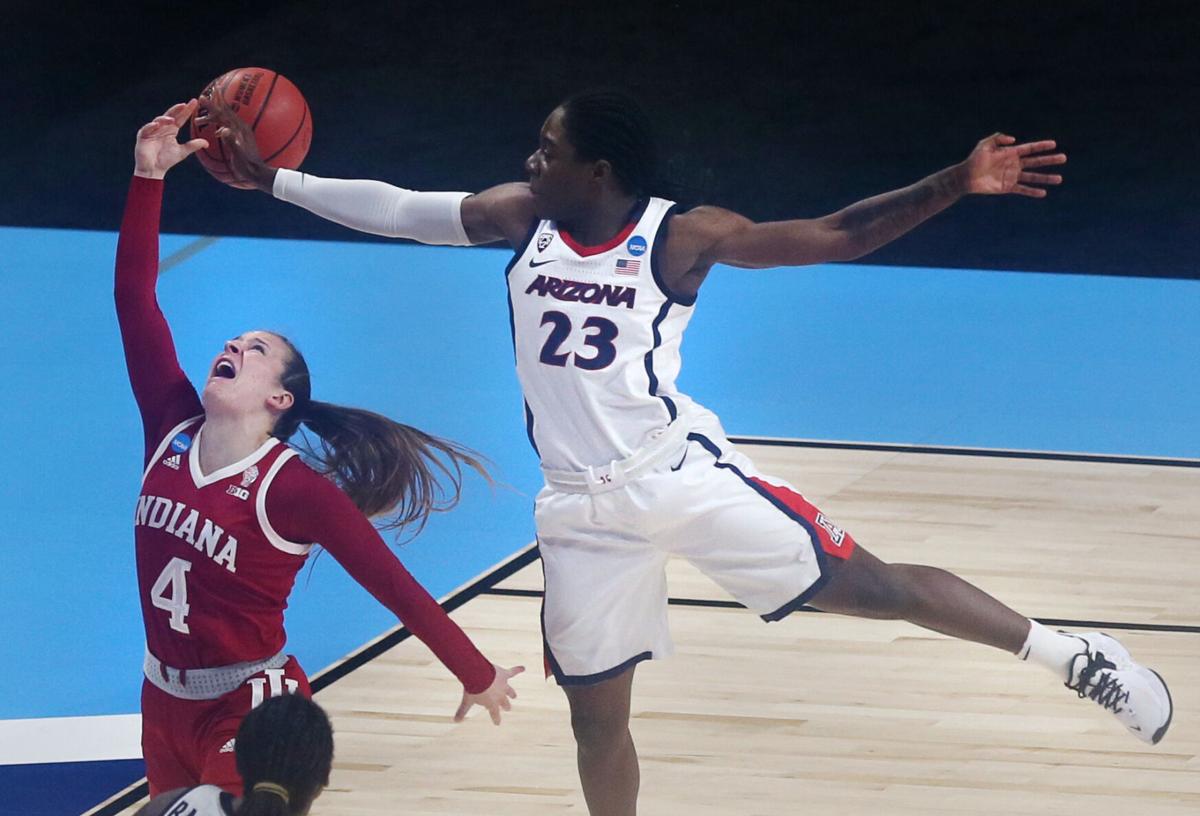 Arizona Wildcats guard Bendu Yeaney (23) blocks a shot by Indiana Hoosiers guard Nicole Cardano-Hillary (4) in the first half during the Elite Eight NCAA Tournament regional final game at The Alamodome in San Antonio, Texas on March 29, 2021. 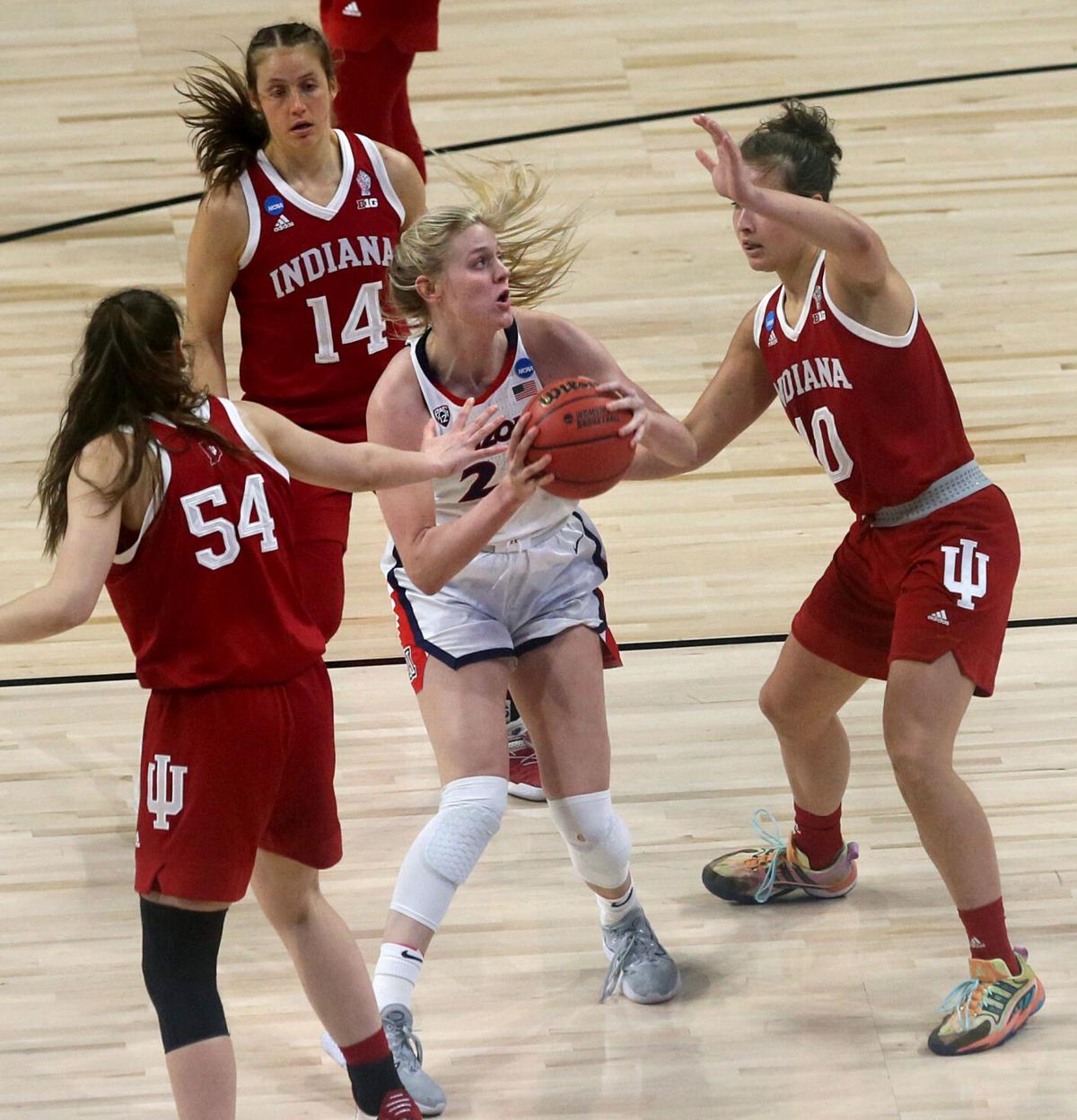 Arizona Wildcats forward Cate Reese (25) eyes the basket as she's defended by Indiana players in the first half during the Elite Eight NCAA Tournament regional final game at The Alamodome in San Antonio, Texas on March 29, 2021. 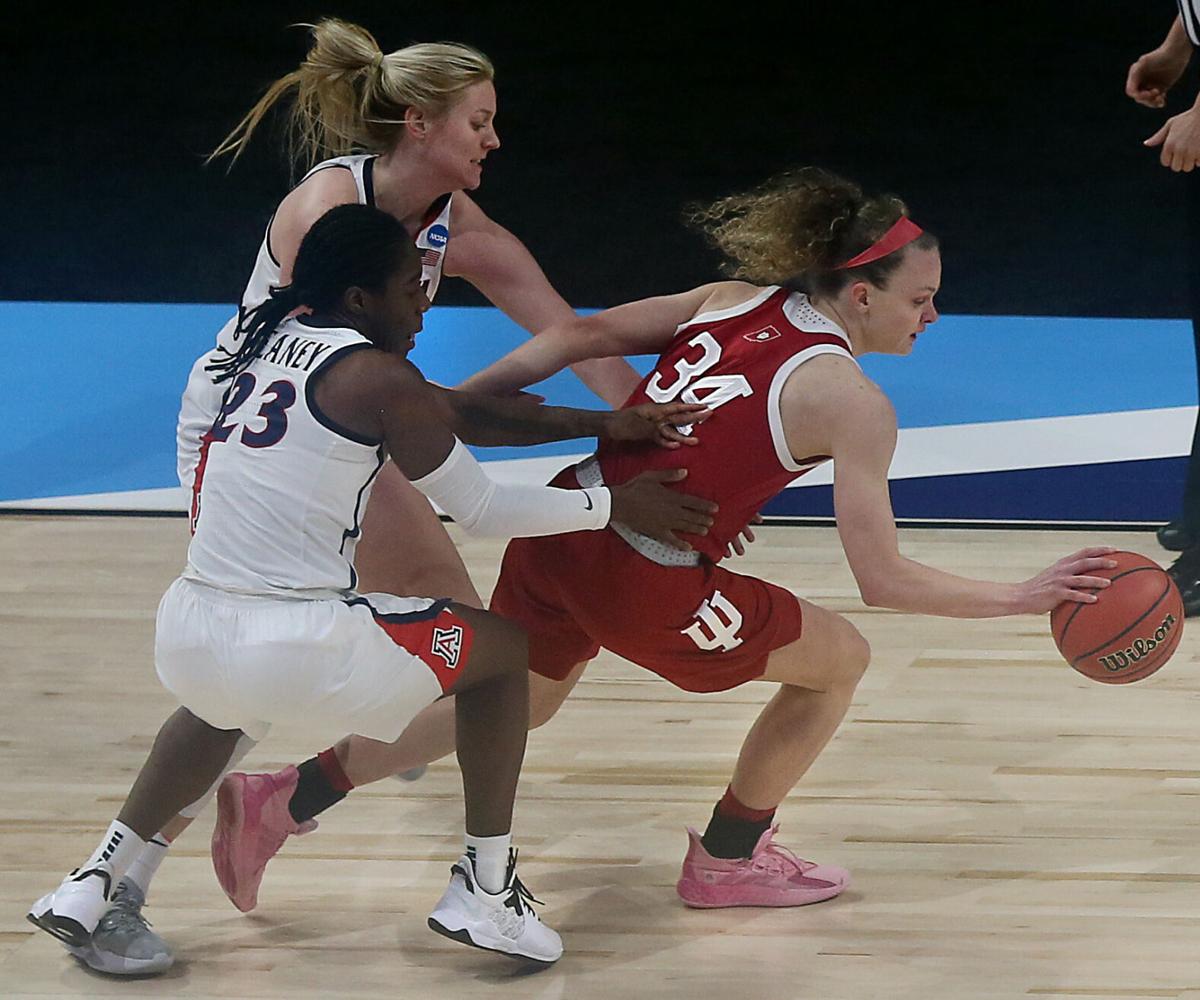 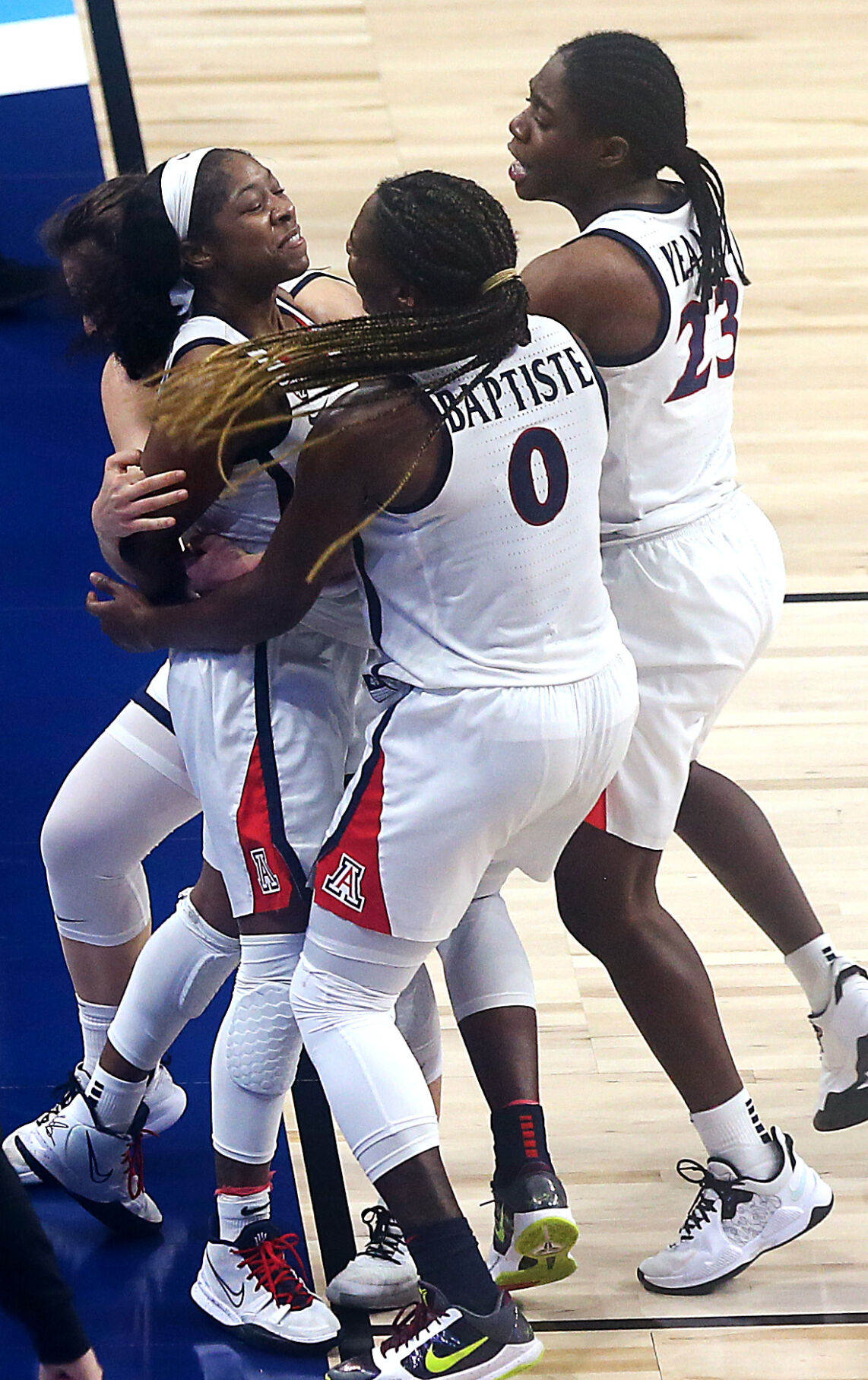 Arizona Wildcats guard Aari McDonald (2) is surrounded by her teammates after she scores another career high in the second half during the Elite Eight NCAA Tournament regional final game at The Alamodome in San Antionio, Texas on March 29, 2021. Arizona wins 66-53 and is headed to the Final Four.