The Arizona Wildcats believed in themselves, even when no one else did.

It’s how they had an 11-game winning streak early in the season, how they beat two ranked teams — Arizona State and Cal — and how they hung with some of the best teams in the country.

Then the Wildcats reached the WNIT and made a believer out of Tucson.

Fans packed McKale Center for Saturday’s 56-42 win over Northwestern in the WNIT final, cheering the Wildcats from the opening tip until coach Adia Barnes and her team cut down the nets.

Saturday’s game drew 14,644 fans, a sellout, the largest crowd to ever watch a Pac-12 women’s basketball game and the fourth-most to ever watch a WNIT game. The Wildcats drew more and more fans with each of their six postseason wins.

Saturday was “magical,” Barnes said. The victory was Arizona’s 24th of the season; the team won just six games last season, and was picked to finish 10th in the Pac-12 this year.

“If you would have said we are going to win the WNIT and sell out with almost 15,000 people. I would have said ‘huh?’ But we did it. This city has been amazing … ” Barnes said. “They were determined to win this thing. They had that attitude. I love they played with heart. We always say ‘made for it’ and I think they we made for it and the whole city was made for this situation.”

The WNIT championship is Arizona’s second in program history. The Wildcats last won the title in 1996, with Barnes — then a sophomore — leading the way. She was named MVP of the tournament.

Saturday, that honor belonged to Aari McDonald. The sophomore point guard scored a game-high 19 points, and added six steals, three assists, and seven rebounds. McDonald weaved her way in between multiple defenders, and flew on the floor diving for 50-50 balls. She also outsmarted Arizona’s brainy Big Ten opponent; McDonald worked on her mid-range jumper this week, and used it Saturday to add a wrinkle to her game.

Northwestern coach Joe McKeown watched McDonald play on the Pac-12 Networks this year. Saturday gave him a new appreciation for the WNIT MVP.

“Until you’re on the court with her, it’s hard to recreate her speed, her decision-making,” she said. “She is a special player. I’m sure every other coach who has had to coach against her feels the same way. She just seems to have a great knack for the moment.”

The Wildcats set the tone early, with forward Sam Thomas registering her lone block in the first few minutes. Arizona struggled from the floor early, but still managed to lead by four points at the end of the first quarter and by 13 — 30-17 — at halftime.

“I feel like in the beginning it was kind of shaky and we were trying to feel things out,” said Thomas, who finished with five points, four assists, and two steals. “Then I think when Cate (Reese) got her and-one and everyone got excited and the crowd got behind her, it never stopped and we just got the momentum.”

That came four minutes in, when Thomas missed a 3-pointer, Reese grabbed the rebound, scored, was fouled and unleashed a scream. Reese, a freshman forward, finished with 13 points and nine rebounds in 27 minutes.

Reese’s emotional outburst was just the beginning. Arizona’s big lead made the final quarter a coronation. The team screamed and celebrated as the game ended. They then gathered together at midcourt and waited for the net-cutting festivities to begin.

Saturday’s game marked the end of one of the most dominating individual seasons in Arizona history, men’s or women’s. McDonald scored 890 this season, the most of any player on either UA team. Khalid Reeves set the men’s mark in 1994, scoring 848.

McDonald and former UConn star Maya Moore are the only players since 2000 to finish a season with 800 points, 200 rebounds and 150 assists. McDonald was recently named an honorable mention All-American by two different organizations.

Saturday there was more than enough of both.

“So I could not have done all these things without my teammates or coaches believing in me. It’s just big,” she said. “I am so excited just to be part of this team. We did amazing things this program hasn’t done in years. It’s exciting.

The Wildcats completed a six-game tournament sweep with a 56-42 victory over Northwestern at McKale Center for the WNIT championship.

Seen and heard: On McKale's noise, McDonald's history and the hottest ticket in town

"This is a pretty good story," UA coach Adia Barnes says. "It’s a story I like."

From Jason Terry, Channing Frye and Jennie Finch, to Mike Candrea and Sean Miller, the Arizona Wildcats community has its eyes on the WNIT cha…

On just three days' notice, UA pulls off the unthinkable and draws 14,644 fans.

Players on Arizona's last WNIT title team remember the joy of cutting down nets, playing together.

Nobody at UA has scored more points in a season than Aari McDonald; here's how she did it

For graduate manager Maddie Searle and the Wildcats, 'effort isn't always on the stat sheet'

Arizona will host Northwestern on Saturday, and "passion plays" just might determine the champion.

The latest batch of documents shows a $28,000 wire payment to Deandre Ayton's handler.

Let's 'do it again': Arizona women's basketball team wants WNIT to just be the start

The Star sits down with AD Dave Heeke to talk about the run to a championship. 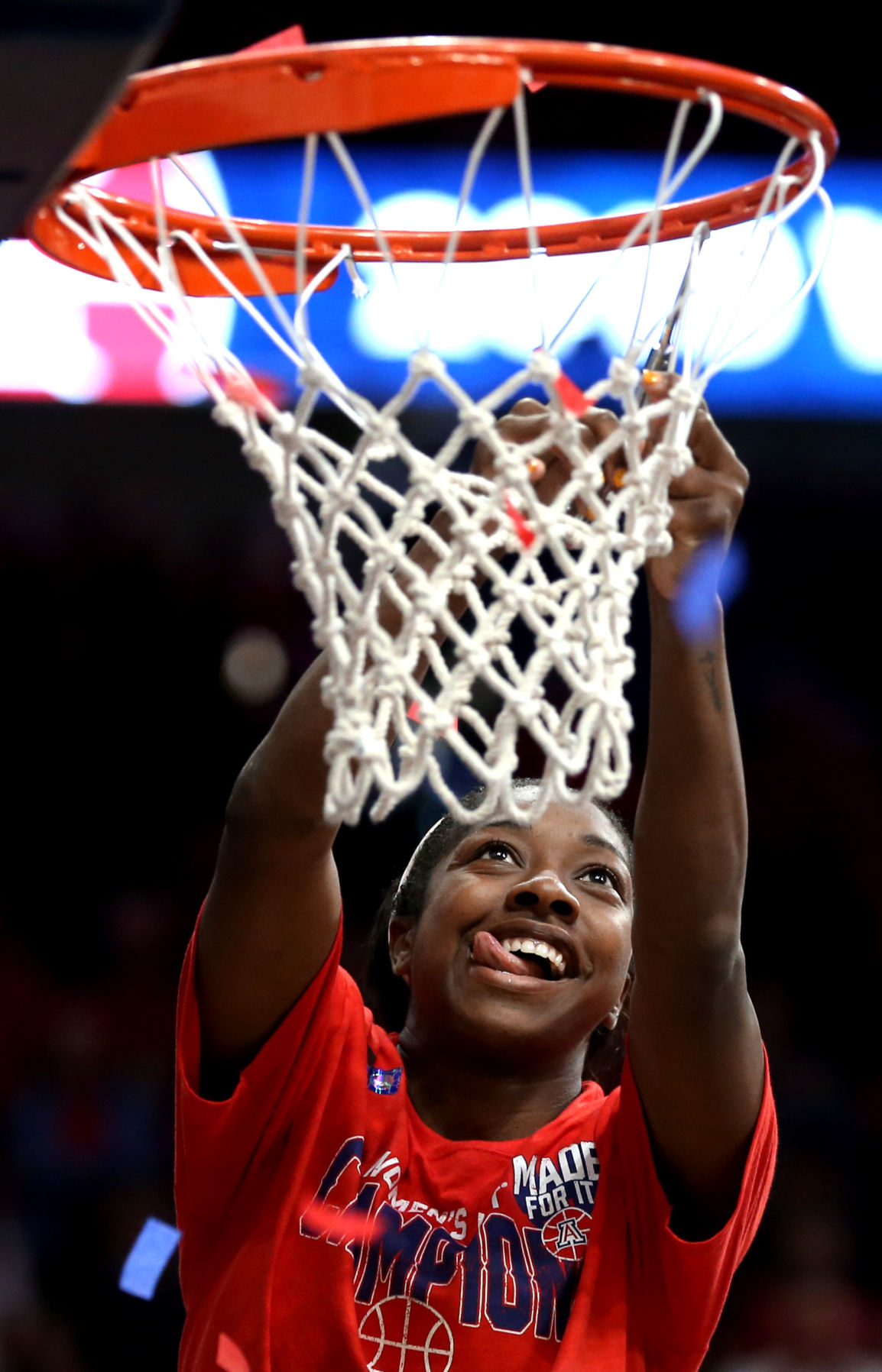 Arizona guard Aari McDonald cuts down her part of the net after their 56-42 win against Northwestern in the championship game of the WNIT at McKale Center, Saturday, April 6, 2019, Tucson, Ariz. 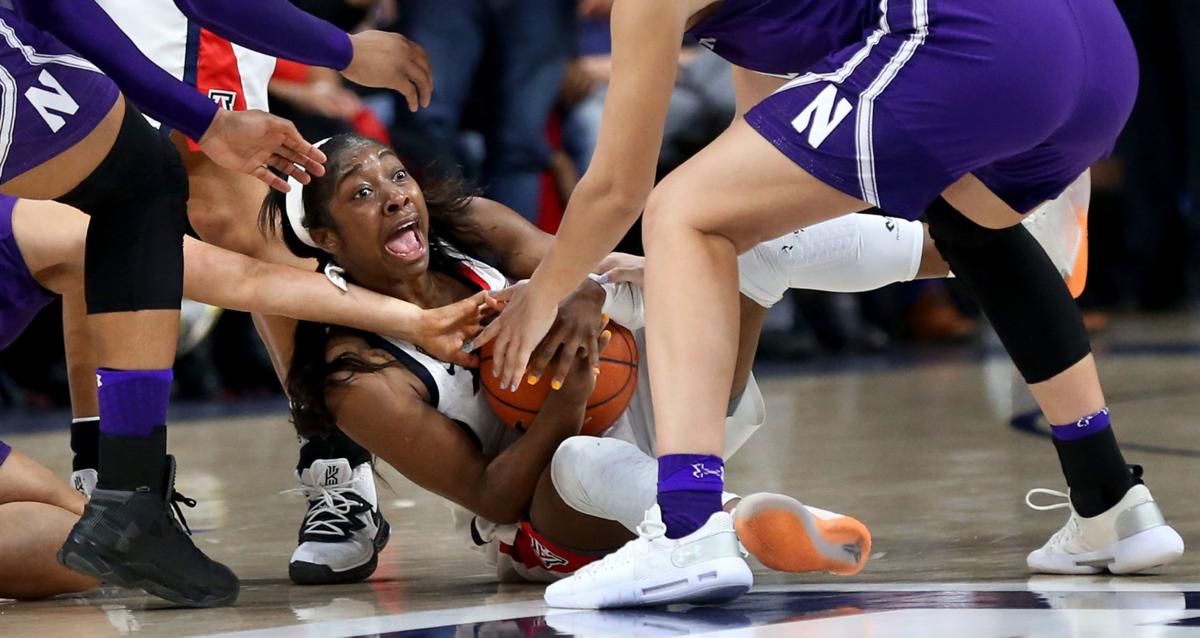 Arizona guard Aari McDonald (2) yells for a timeout as Northwestern players converge on her in a scramble for a loose ball in the championship game of the WNIT at McKale Center, Saturday, April 6, 2019, Tucson, Ariz. 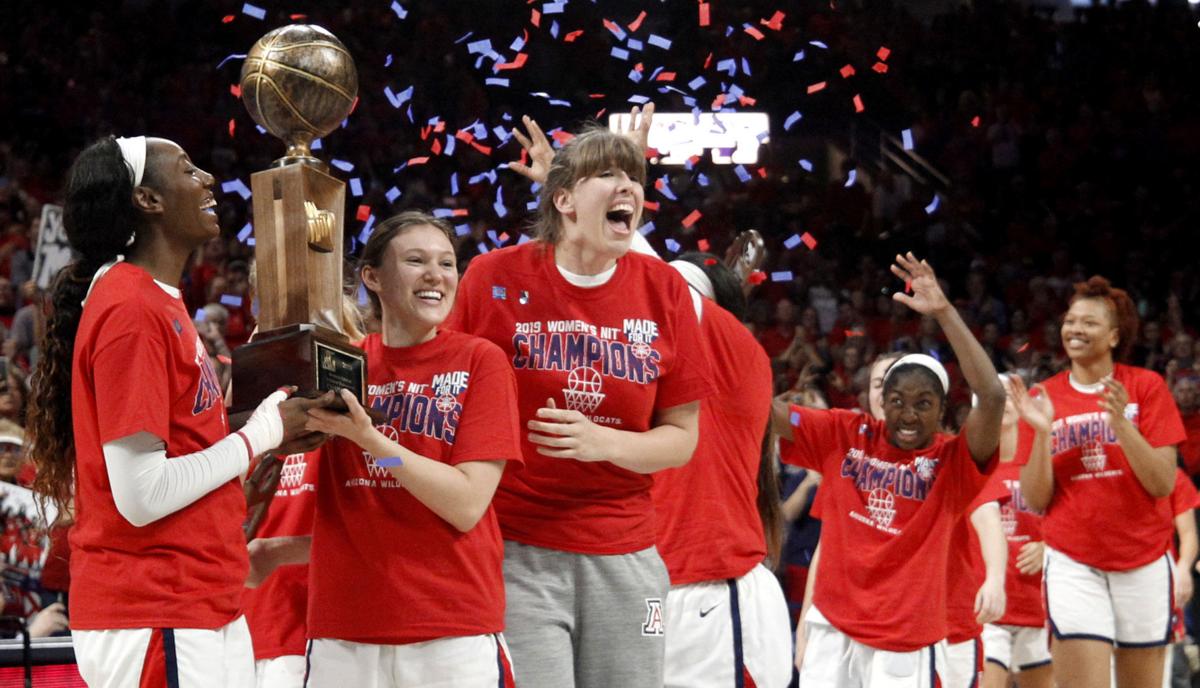 From left, Arizona's Destiny Graham, Lindsey Malecha and Eugenie Simonet-Keller, hoist the championship trophy as guard Aari McDonald and Semaj Smith celebrate on the court after winning the WNIT championship at McKale Center. 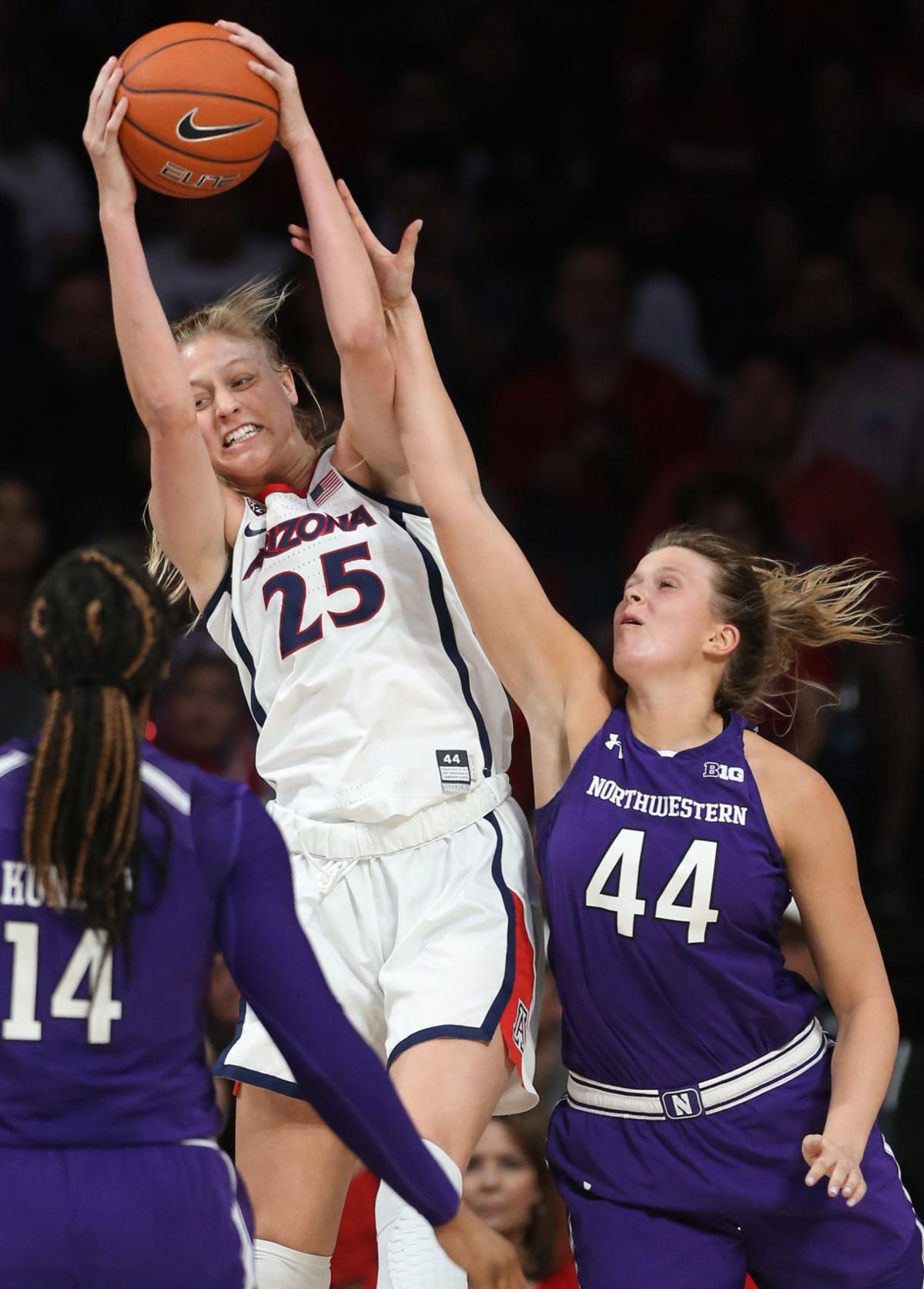 Arizona forward Cate Reese rises up to snare the ball over Northwestern center Abi Scheid after it was batted around a few times during the championship game of the WNIT at McKale Center, Saturday, April 6, 2019.