Adia Barnes was hired three years ago to return the Wildcats to their winning ways.

A few days into her new job, she attended her first CATSYs. Barnes’ new team wasn’t mentioned at all during the athletic department’s annual awards show, which is modeled after The ESPY Awards.

It wasn’t long before the Wildcats were volunteering in the community and focusing even harder on academics. As Barnes looked to rebuild the roster, she targeted the kinds of players who could one day win a CATSY for athletic or academic success.

For the third straight year, Barnes’ program won the Community Cup for the hours they spent giving back. The team logged more than 3,500 hours in the community, 223 more than last year.

There was a lot more for Malecha, who carries a 4.0 GPA as a biology major and will start applying to medical school this summer. She was recognized as the salutatorian of the senior class and took home two awards from the honors college.

Barnes said she was proud of Malecha, who joined the program as a walk-on before earning a scholarship.

“She is a great example of what kind of player and person I want in my program,” Barnes said. “I am so happy I had her here for two years and wish I had her longer. All the things we talk about a player being made for, it is who Lindsey is. I always know what I’m getting from her every day. She is consistent. She never changes. She is one of the few I have who is always appreciative; she always texts and thanks me. I just love her. I wish I had more players like her.

“Even when she was stressed — and she had a tough workload — to maintain a 4.0 as a student-athlete is remarkable. I am happy for her that she was recognized, and I am happy how she represented the program. I am proud of that.

“I loved that she talked about her past (in her speech). You can reach your goals in different ways and overcome adversity. She is a great example of that. I am blessed that we crossed paths and that I was able to help her reach her goals.”

The Wildcats played the WNIT championship game on April 6, the latest they have ever played a game.

They missed out on a few things — notably, the mandatory two-week break that typically comes in March. The Wildcats took the last two weeks off, and are spending this week in training. After that, practice is shut down for finals. The coaches can’t work with the players until May 13.

Barnes said the Wildcats have been working out on their own. Winning will do that.

“They have that hunger now that we won the WNIT championship,” she said. “Now they want it more.”

Barnes must also replace two assistant coaches — Morgan Valley left to become head coach at Hartford, and April Phillips departed to join the Cal staff — and recruit for the Class of 2020 and transfers.

“We have five starters returning, a great class coming in, the culture is in a good place. It’s great! The kind of program you want to be with. I’ve had like 100 applicants for the coaching positions, and I’m almost done with the process. More transfers want to come here. These are all good problems to have. I am excited about the future — the future is great.”

McDonald tried out for USA Basketball’s U19 World Cup team before transferring to Arizona and just missed the cut.

Disrespected on the court, Max Hazzard confident he can have 'a big role' at Arizona

Hazzard knows what it feels like to get no respect. Now at UA, he's eager to let his game do the talking.

April Phillips will join Cal's staff as an assistant coach.

From fans to freshmen: Adia Barnes, Wildcats face these key questions in offseason

Let's 'do it again': Arizona women's basketball team wants WNIT to just be the start

The Star sits down with AD Dave Heeke to talk about the run to a championship.

Coach Clancy Shields and the Wildcats will take on Oklahoma on Friday in College Station, Texas.

Arizona earned a net profit of $106,051 from its six-game run through the WNIT while exceeding the minimum guarantees it contracted to pay tournament operator Triple Crown Sports, Inc.

Hoffman, who suffers from unbalanced translocation between genes, just might be Augie Busch’s most valuable signing at Arizona.

Adia Barnes makes good on promise, landing a pair of transfers for Cats

Judith Blair writes that WNIT run made her heart happy.

Mike Neighbors, Kevin McGuff could tell right away that Barnes, the former Washington assistant, had it. 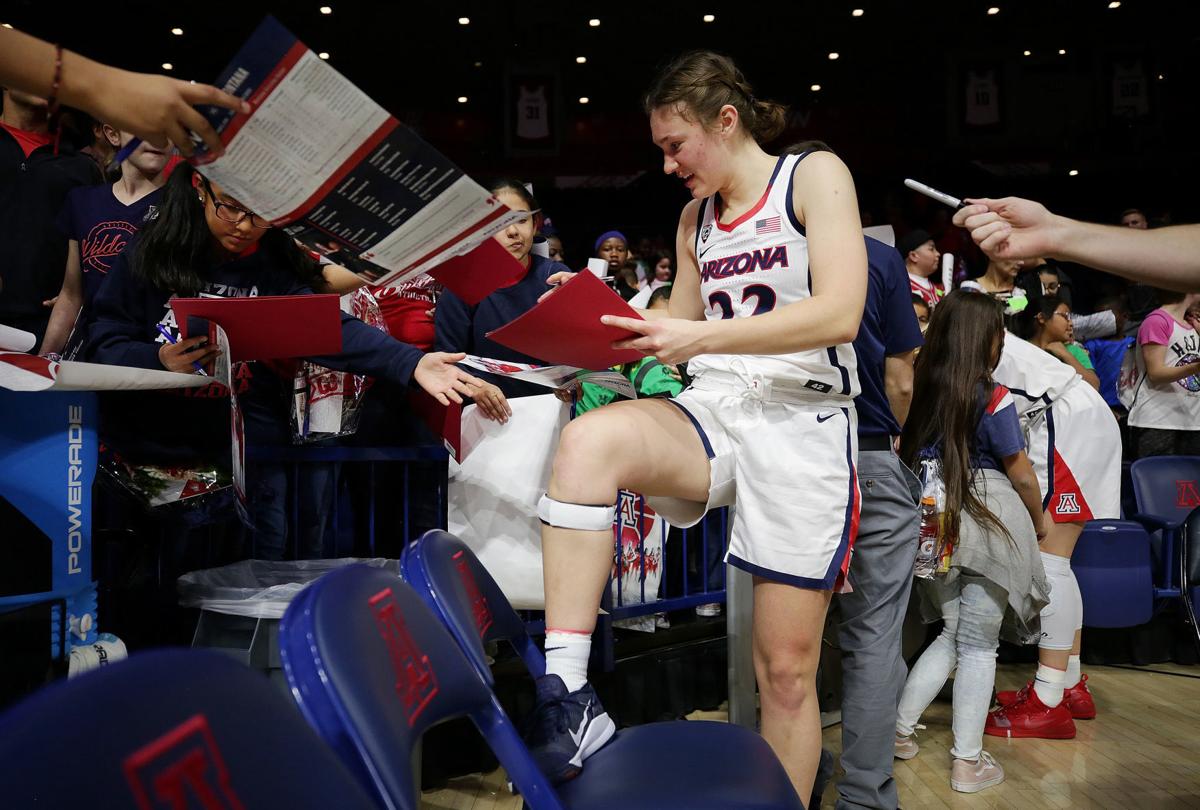 With a 4.0 GPA, senior Lindsey Malecha was honored as a UA academic champion. She was the salutatorian of the senior class. 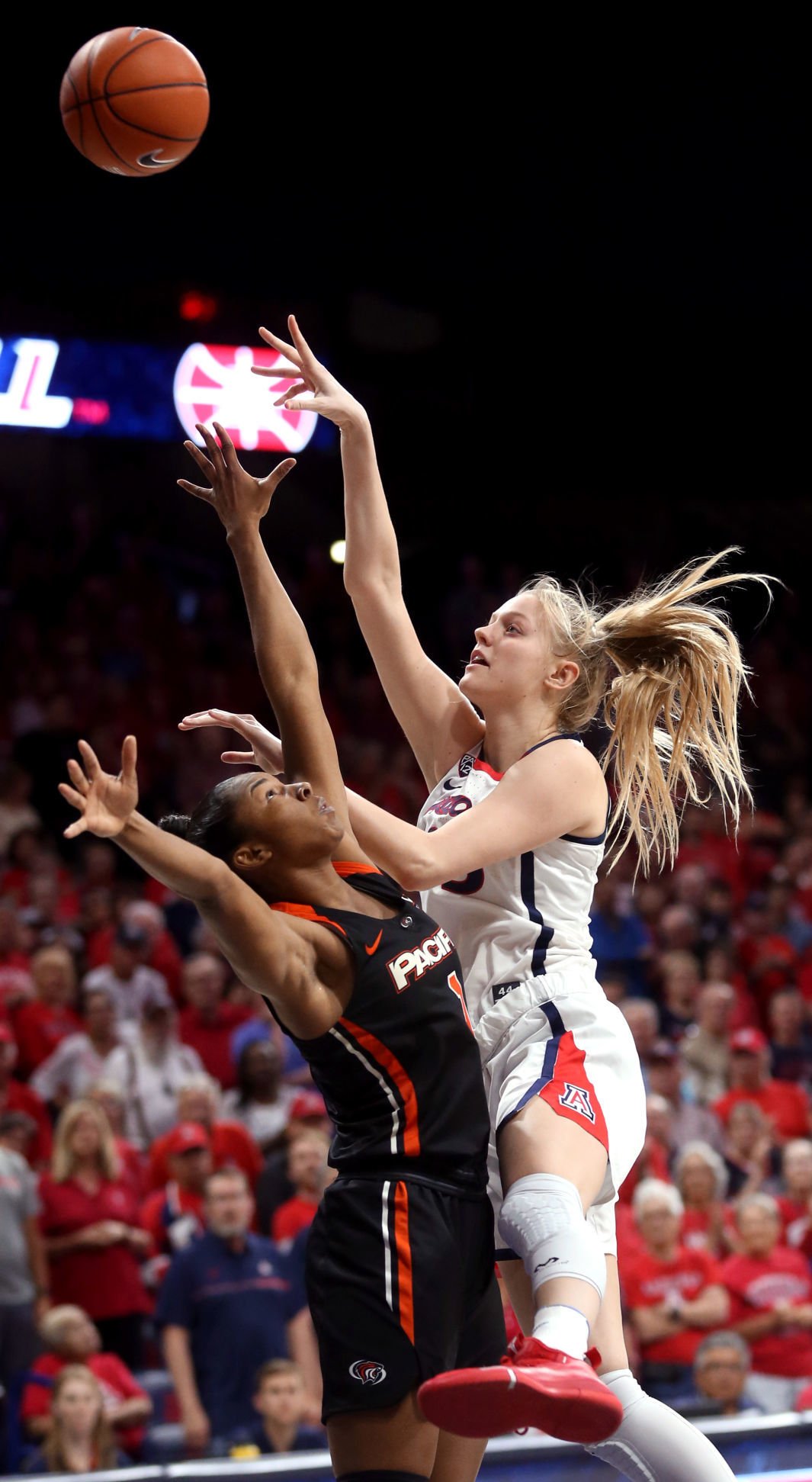