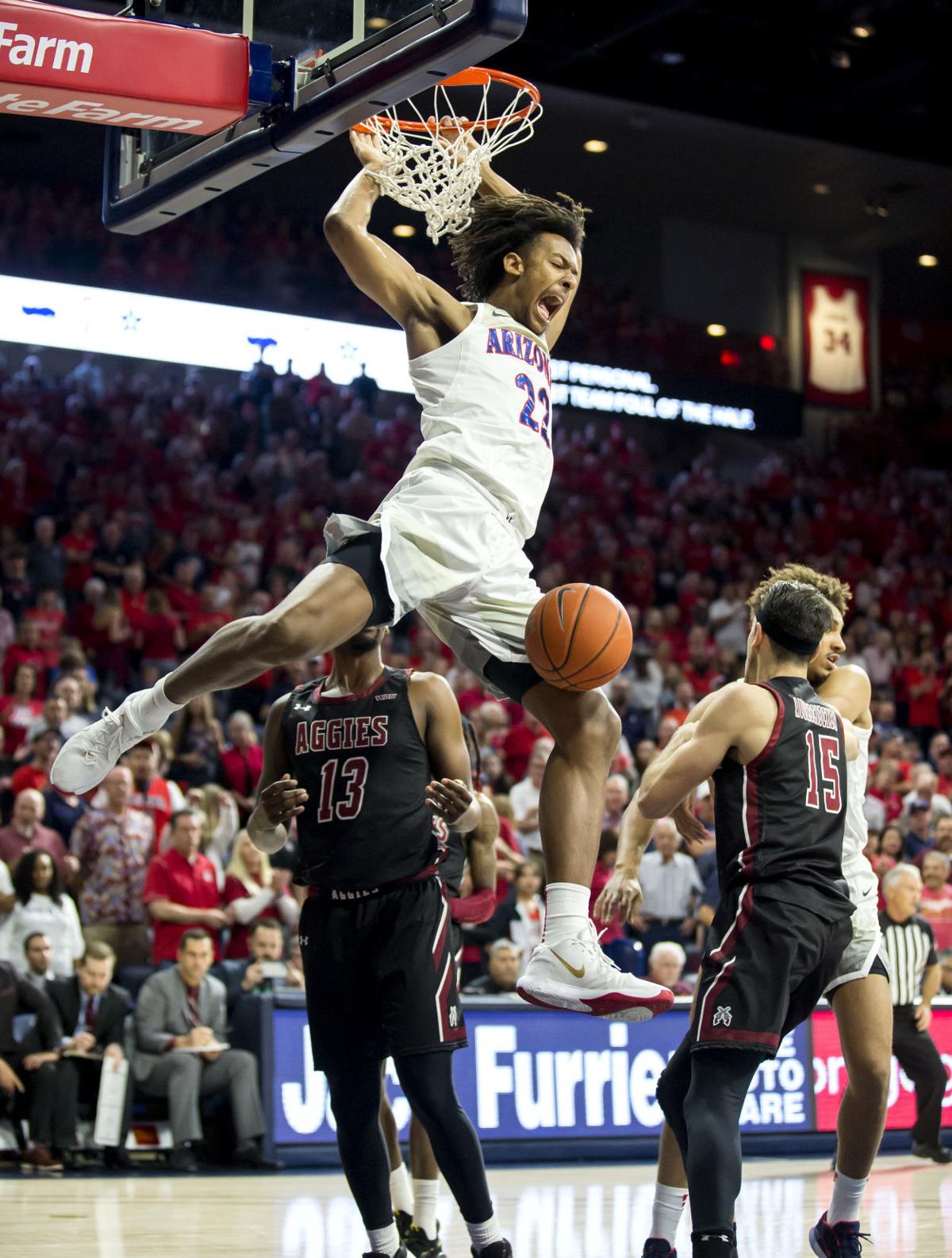 Arizona’s Zeke Nnaji has made his last 17 shots from the field and his last 13 free throws. He has helped the Wildcats climb to the 15th-best shooting percentage (52.7) in the county. 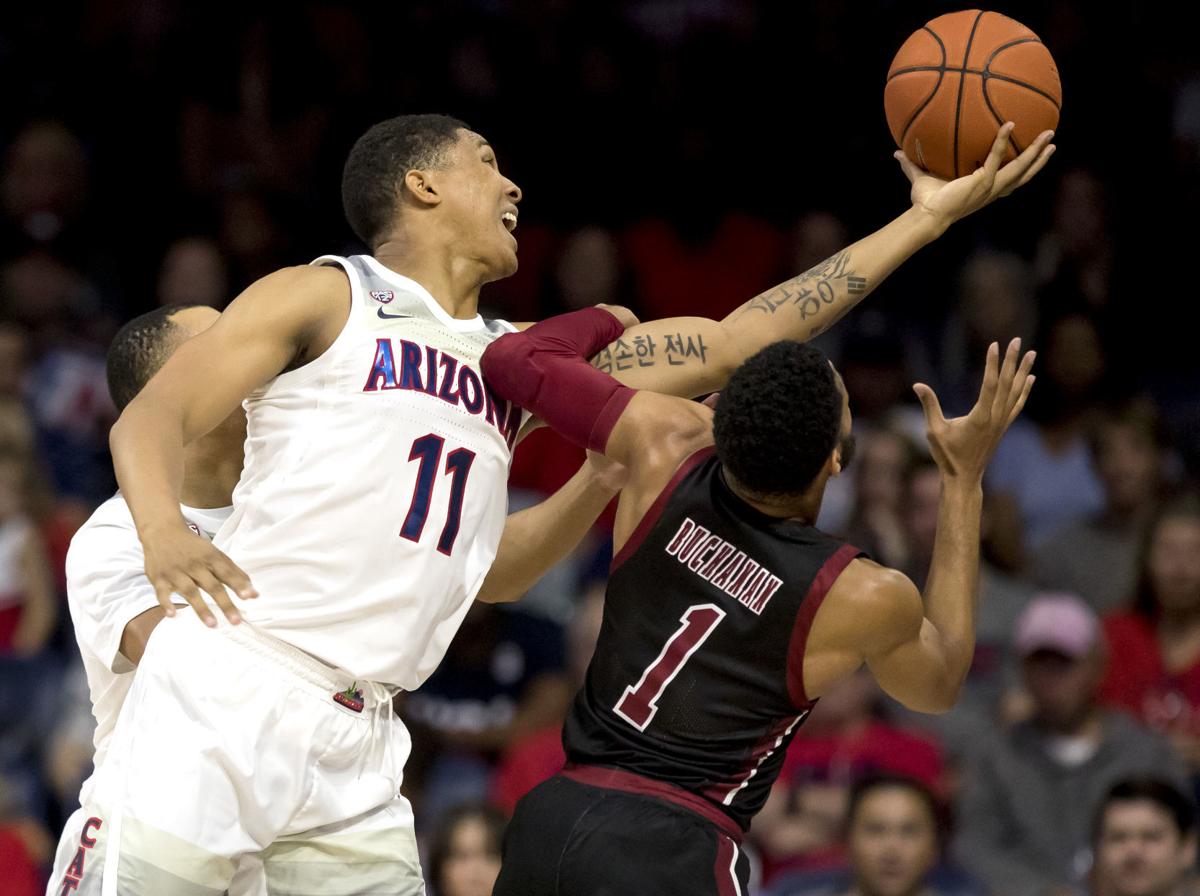 Arizona forward Ira Lee, left, steals the ball from New Mexico State guard Shunn Buchanan on Sunday. The Wildcats have won all four of their games this season by at least 21 points. They have risen to No. 14 in the AP poll.

Zeke Nnaji’s near-perfection earned the Arizona forward a second straight Pac-12 Freshman of the Week award Monday and helped jump him up to No. 25 on ESPN’s NBA Draft board.

“He looks like a potential one-and-done first-round pick through four games,” ESPN wrote.

But the truth of it is that Nnaji’s teammates haven’t been too bad shooting the ball, either.

While Nnaji has made 17 straight field goals and 13 straight free throws, the Wildcats overall have the 12th-best 3-point percentage (43.6) in Division I and the 15th-best field goal percentage (52.7).

According to Kenpom, Nnaji’s efficiency has also helped them to a 57.1% rate from 2-point range that ranks No. 31 and is, so far the Wildcats’ best-ever percentage.

After Arizona beat New Mexico State 83-53 on Sunday, UA coach Sean Miller said he thought this year’s team was his best shooting team yet, comparing it to the Derrick Williams-led Arizona Elite Eight team of 2010-11.

Although the Wildcats have yet to leave McKale Center nor play a ranked team this season, the numbers suggest Miller may be right.

Arizona’s 43.6% 3-point shooting is nearly four percentage points greater than that of 2010-11, when the Wildcats shot 39.7%. That team also shot 51.0% from two-point range, the fifth-best percentage in the Miller era.

“When we caught fire (in 2010-11), we had a lot of guys coming in and off the bench,” Miller said. “Some of our starters shot a pretty high percentage and we had Kevin Parrom, Jamelle Horne, Brendan Lavender and Jordan Mayes in his freshman year. Then Derrick.”

In addition, Josh Green (5-15) and Max Hazzard (4-14) have been fairly prolific, though less accurate, from long range.

“I would say that our firepower from three, you can really feel it in transition,” Miller said, “and it’s something is that it’s not gonna be as easy for the defense to deal with this year.”

The ball’s in good hands

When the Wildcats aren’t shooting it, they’ve also been pretty good at taking care of the ball.

Arizona has coughed up only 10.8 turnovers a game, slightly above Miller’s usual single-digit goal, and dished 75 assists on its 127 made baskets. While that’s only the 66th best assist-make ratio in Division I, Arizona has ranked in the lower half of Division I teams in that ratio over the past five seasons.

Starting freshman guards Mannion (18-11) and Green (10-4) have both posted respectable assist-turnover ratios so far, while Jemarl Baker (13-1) and Max Hazzard (12-1) have phenomenal ratios off the bench.

“Both Max and Jemarl are really doing a great job of taking care of the ball,” Miller said. “Very seldom you sub perimeter players in like that and they play long stretches without any turnovers.”

On Sunday, Hazzard had four assists without a turnover, while Baker had one assist and no turnovers.

Afterward, Hazzard also dished a little extra credit Nnaji’s way. UA posted on a list of Nnaji’s accomplishments on Twitter, and Hazzard retweeted them with the comment, “Just the beginning, young king.”

Arizona gained five spots to reach No. 14 in the Associated Press Top 25 on Monday after moving to 4-0 with its win over New Mexico State.

Duke became the new No. 1 after Kentucky lost to Evansville. Among Pac-12 teams, Oregon moved from No. 14 to 11 while Colorado moved up from No. 25 to 23 and Washington slipped from 20 to 25 after losing to Tennessee.

Arizona is rated No. 11 in Kenpom and 19 in the Sagarin ratings.

Rakocevic edges Nnaji for POWWhile Nnaji earned the Pac-12’s freshman of the week award Monday for his near-perfect efforts in UA wins over San Jose State and New Mexico State, USC’s Nick Rakocevic was named the conference’s player of the week.

Rakocevic averaged 25.5 points and 13.5 rebounds while shooting 62.1% from the field over the Trojans’ two wins — including 24 points and 11 rebounds at Nevada.

*Through four games, all at McKale Center

Cats move to 4-0 with 30-point win over visiting Aggies.

League is now a combined 39-4 in non-conference play.

Arizona’s Zeke Nnaji has made his last 17 shots from the field and his last 13 free throws. He has helped the Wildcats climb to the 15th-best shooting percentage (52.7) in the county.

Arizona forward Ira Lee, left, steals the ball from New Mexico State guard Shunn Buchanan on Sunday. The Wildcats have won all four of their games this season by at least 21 points. They have risen to No. 14 in the AP poll.