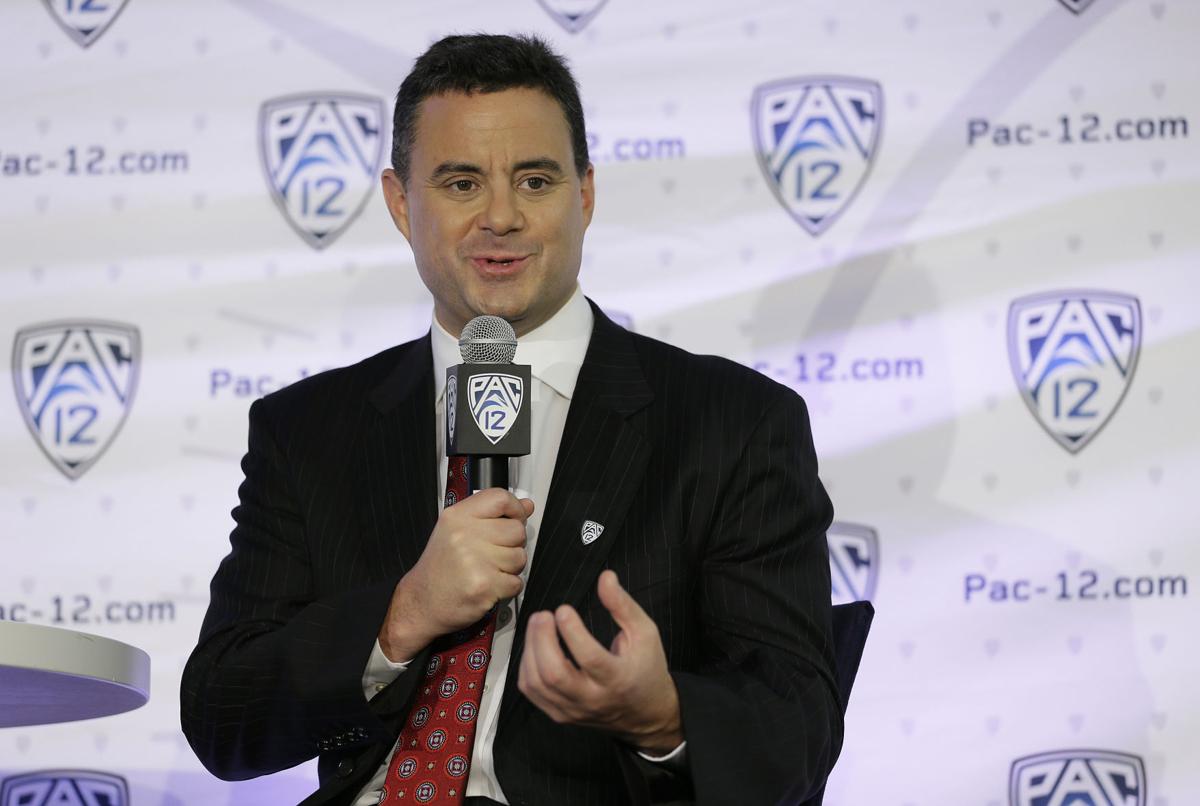 Arizona coach Sean Miller answers questions during Pac-12 media day in San Francisco. The Cats were picked to finish second in the conference. 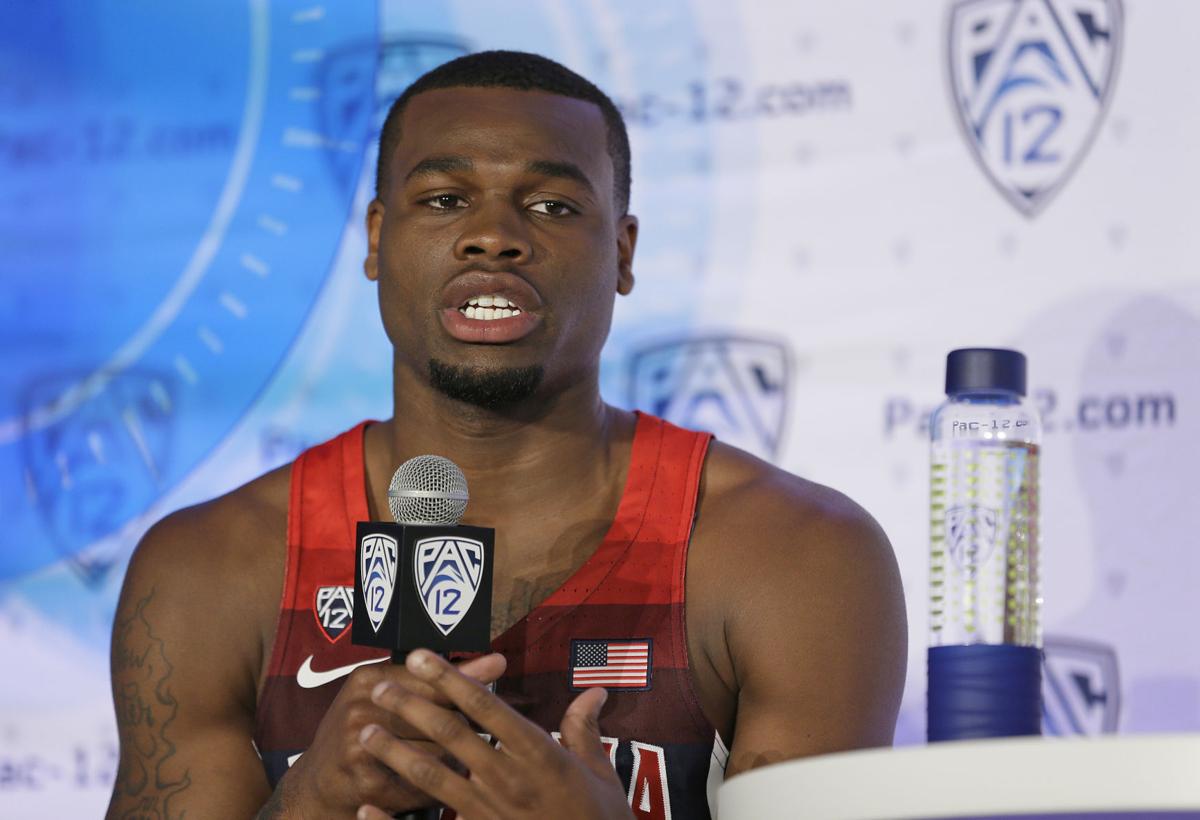 Guard Kadeem Allen showed up at Friday’s event in the place of sophomore Allonzo Trier. The UA has refused to comment about Trier’s status.

One was Arizona guard Kadeem Allen. The other was an elephant.

Because Trier’s eligibility status remains unclear this week — and Arizona continues to refuse comment in any form — his no-show at the league’s annual preseason publicity event only added a higher profile to the question marks.

Trier had been long planned to represent UA at the event, and was listed on the Pac-12’s official schedule earlier this week. But Allen’s name surfaced on the online calendar Friday and the senior wing showed up instead of Trier.

While Miller spoke highly of Trier’s recent on-court efforts during the Pac-12 Networks’ televised media-day show, he was asked later on the interview podium if Trier’s absence was related to his eligibility, and what that status is.

“I’m not going to comment on that,” Miller said.

Miller’s response was consistent with his podium interview after the Oct. 14 Red-Blue Game. Arizona athletic direct Greg Byrne has also declined to comment.

In a way, Trier’s situation was fitting on a day when absences and question marks were arguably more newsworthy than the Pac-12’s annual media poll, which picked Arizona to finish second behind Oregon as expected.

Not only were conference player of the year candidates such as Cal’s Ivan Rabb, Oregon’s Dillon Brooks and Washington’s Markelle Fultz nowhere to be found, but Brooks’ foot injury is yet another mystery that could affect the way the league plays out.

While Oregon is loaded with veteran talent, Brooks’ ability to get a shot off nearly anywhere on the court — in addition to his rebounding and passing — are vital needs if the Ducks are to become the conference favorite and a Final Four contender.

Yet it isn’t clear if Brooks will be at 100 percent from his summertime injury by the time the conference season rolls around New Year’s weekend. Oregon coach Dana Altman said Brooks is “on schedule” but said the Ducks might have to go with a three-guard front if he’s not available any time soon.

“If it were up to him, he’d be practicing right now but we’ll listen to the doctors,” Altman said. “If he’s not available early, it will be difficult for our team because we have a very challenging November. … But (if he’s missing) I think our guys will look at it as a challenge to pick up the areas that Dillon would generally do.”

While Brooks’ status was unclear, the Ducks still received 23 of 27 first-place votes among media members who regularly cover the conference, while Arizona picked up the other four.

UCLA was picked third, followed by California and Colorado. It is the Buffaloes, who lost low-post mainstay Josh Scott but return nearly everyone else, that Miller said could be better than expected.

“In a quiet way they’re gonna be as good as they’ve been,” Miller said. “They have experience, talent and Tad (Boyle, CU coach) obviously does a great job. Then I think you have a heavyweight at the top with Oregon, a one seed (in the NCAA tournament) last year. When you have a team that good in the conference it kind of pulls everybody up.”

It was the first time since the Pac-12 poll went to media voting in 1992 that the Ducks have been picked first, giving the Ducks the kind of target that has both Altman and Oregon guard Tyler Dorsey on the alert.

“Every night it doesn’t matter who we’re playing, they’re gonna want to beat us,” Dorsey said. “It’s gonna be very competitive and teams are going to want to beat us and we’re going to have to be ready and mentally prepared. We can’t look past anybody.”

Oregon’s emergence in this year’s Pac-12 poll marked the first time in five seasons that the Wildcats have not been picked to win the league, though UCLA wound up winning the Pac-12 in 2012-13 and Oregon did it last season.

Maybe that was just as well for the Wildcats, who now have the hype of unprecedented recruiting success this fall on top of a highly rated freshman class featuring Lauri Markkanen, Rawle Alkins and Kobi Simmons.

“I think the thing we try to guard against is you think you’re better than you really are,” Miller said on the Pac-12 Networks show. “That’s one of the problems we have at Arizona.”

After the TV show and podium interviews were finished, Miller noted that how the race plays out is all subject to some uncertainty anyway.

The Wildcats were picked to finish first last season, but suffered a number of preseason injuries, went without starters Kaleb Tarczewski and Trier for about a month each during the regular season, and lost key reserve Elliott Pitts as part of what was eventually revealed to be a university finding of sexual misconduct.

“First or second — it’s not like we got picked sixth. That would be different,” Miller said. “We’re near the top, and a lot of it is health and things that sometimes happen within your own team that derail you.

“Oregon’s already facing something right now with Dillon Brooks having an injury. I’m sure if you talk to them, they wish he was healthy, you know.”

Arizona may be hoping it isn’t facing the loss of a key player, too.

Full results of the Pac-12 basketball media poll, with total points and first-place votes in parentheses:

Get to know the real Allonzo Trier.

Watch: Miller says Ristic has unprecedented 'desire and hunger' for a big man

Watch: Miller says Arizona Wildcats freshman Lauri Markkanen is 'ahead of the game'

Arizona Wildcats basketball coach talks about how player will be used this season.

Arizona coach Sean Miller answers questions during Pac-12 media day in San Francisco. The Cats were picked to finish second in the conference.

Guard Kadeem Allen showed up at Friday’s event in the place of sophomore Allonzo Trier. The UA has refused to comment about Trier’s status.