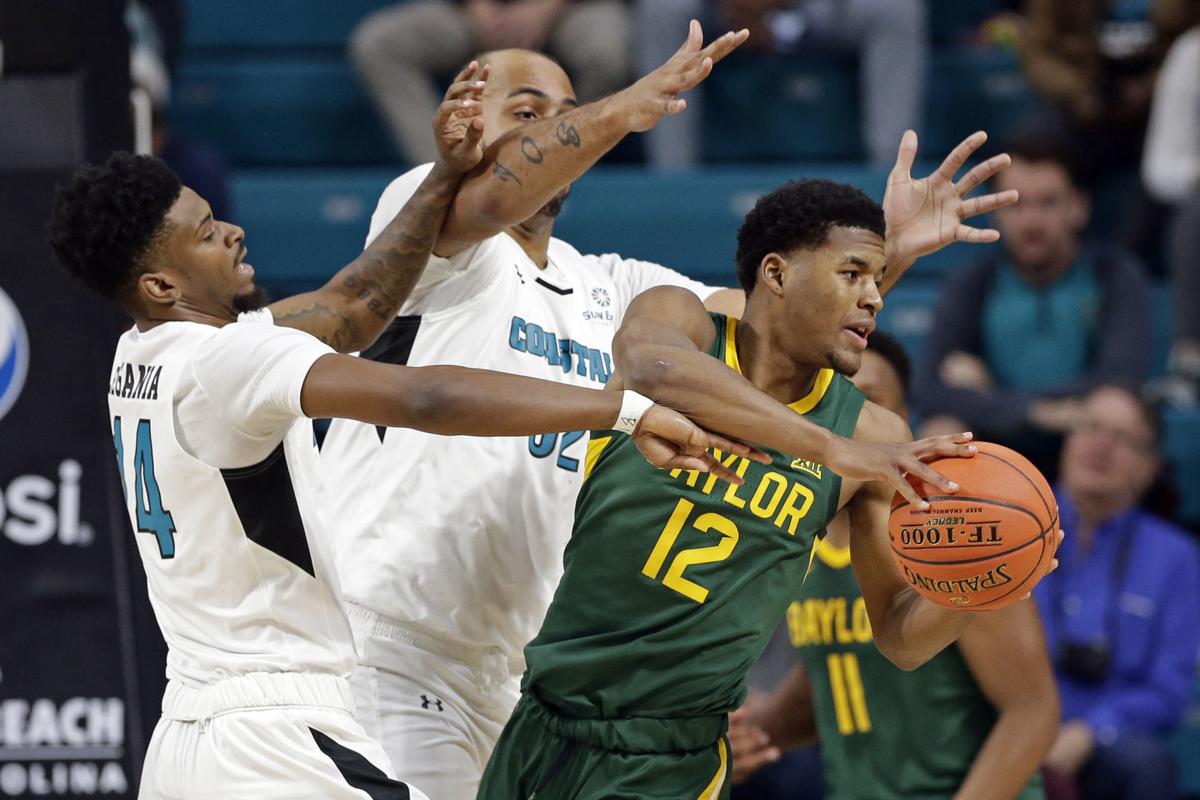 Baylor guard Jared Butler (12) was a role player for the Bears when they beat Arizona last season at McKale Center. He has since developed into one of college basketball’s best guards. 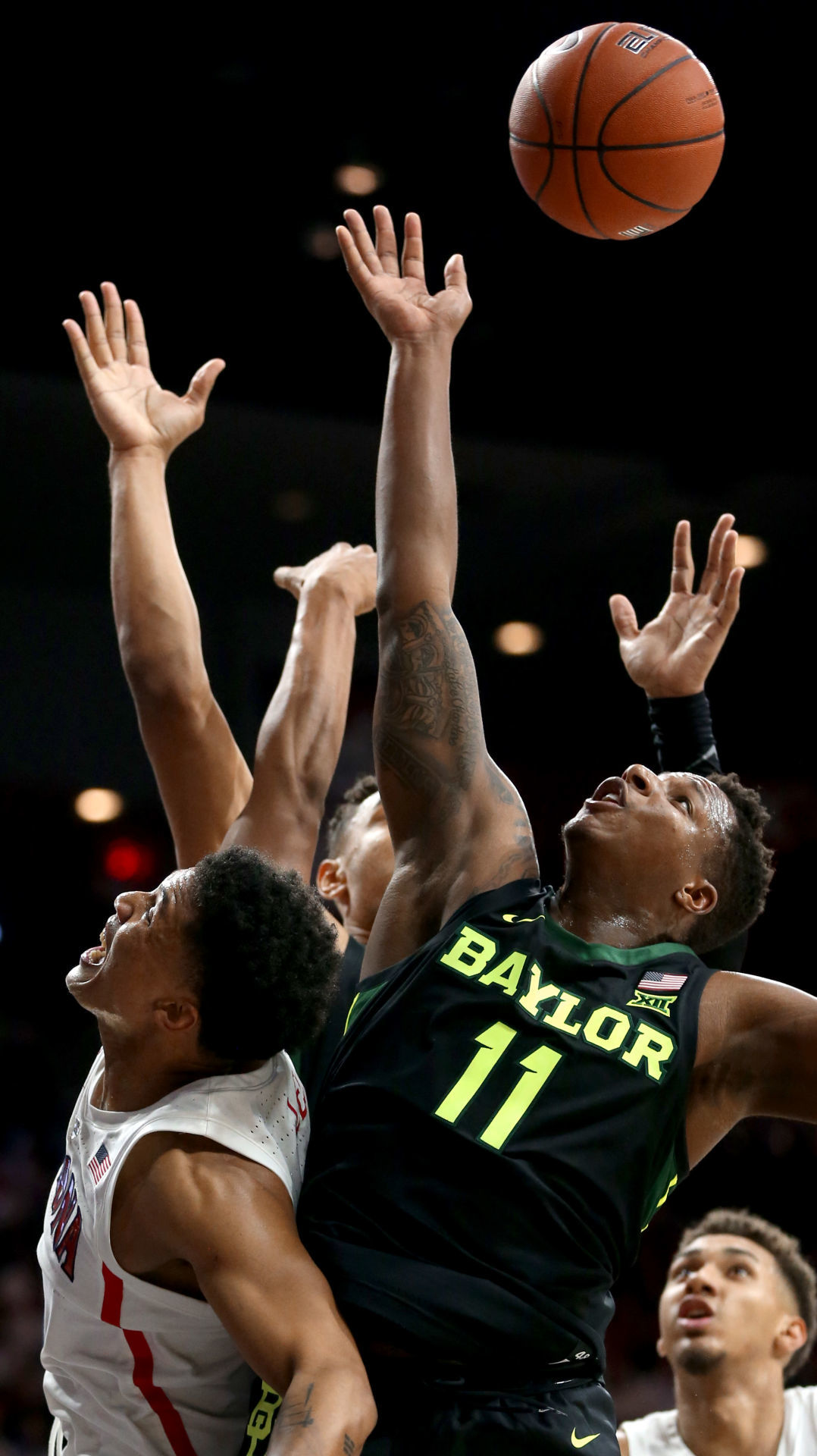 Arizona forward Ira Lee (11), left, loses the fight for a rebound to Baylor guard Mark Vital (11) in the first half of their game at McKale Center, Saturday, December 15, 2018, Tucson, Ariz.

About an hour after Baylor snapped Arizona’s 52-game nonconference home-court winning streak a year ago, a corrected box score was issued that added another rebound to the Bears’ total.

As if it really mattered.

The change was necessary, for sure, but the message had already been sent with stark clarity: In the Wildcats’ 58-49 loss, Baylor had outrebounded them 51-19, by far the largest rebounding deficit the UA has ever had in the Sean Miller era.

Included in that number were 19 offensive rebounds that Baylor scored 19 second-chance points on.

And that one extra rebound? It went to forward Mark Vital, who collected 17, not 16.

This season, Vital is mostly coming off the bench. That might give you a hint of how Baylor is faring so far.

Entering their showdown with Arizona, the No. 18-ranked Bears have beaten six teams, including Villanova, while losing only to Washington by three points in Alaska. A role player in that McKale game, Jared Butler, has evolved into one of college basketball’s best guards.

And they’re still a ferocious rebounding team, with the 11th-best offensive rebounding percentage in Division I, according to Kenpom.com.

“They’re incredibly physical,” Miller said. “Last year, that rebounding differential was embarrassing. Although it’s a new year, clearly we have a number of players who were in that game and I don’t think we have to remind them of what happened.”

Lee was actually Arizona’s leading rebounder in that game with five, which isn’t a surprise considering his customarily hard-nosed mindset.

“Ira’s a winner,” Miller says. “He gives his teammates his heart and soul. His intent is always good.”

Lee has considerably more help on the glass this season, too. Freshman forward Zeke Nnaji is averaging 6.8 rebounds a game while another freshman, Josh Green, has used his length and athleticism to pull down an average of 5.3 from the wing.

Overall, the UA is outrebounding opponents by an average of 4.9 so far and, when presented with their toughest rebounding task of the season to date against Wake Forest last Sunday, outrebounded the Demon Deacons 43-38.

The Wildcats may have some peripheral advantages Saturday, too.

For one thing, the 10 a.m. start on their body clocks surprisingly tends to work to their advantage: Arizona has won 10 of its last 12 nonconference road games that start in midday, and one of those two losses was at Alabama last season by a diminished UA team.

It may also help that the Wildcats have routinely arisen for 8 a.m. breakfasts all semester, often lifting weights afterward, and, like all elite college players, they have experience playing games at all hours in club ball and college.

“People think it’s a disadvantage but it really isn’t,” Lee said. “As long as we come mentally prepared.”

What is technically a true road game might also be friendlier than expected for the Wildcats.

Not only can UA draw alums from several major Texas cities for the game, but it’s also possible the Bears’ crowd might be diminished by the Baylor football team’s presence in the Big 12 championship game that starts at exactly the same time.

Two seasons ago, Arizona beat Texas A&M in a game at Houston that featured a decidedly mixed crowd, though Miller wasn’t counting on any sort of advantage.

But Baylor has some potential advantages of its own. The school is giving out free tickets for the basketball game, and a football watch party, to bring out more fans to the Ferrell Center.

And if that still doesn’t work, the Bears always have an easy source of internal motivation.

Not only are they ranked below the Wildcats but the Bears have heard plenty about Arizona’s three potential first-round NBA draft picks: Nico Mannion, Josh Green and Zeke Nnaji.

When asked about the guard matchup while meeting with reporters in Waco on Thursday, Butler said he was “not really caught up in that” as much as winning, and he professed respect for the Wildcats.

Then Butler added this:

Looking back at the UA’s offensive performance and taking a peak at what lies ahead in 2020.

Cate Reese adds a move, steps up when Wildcats need her

Sophomore averaging 13.8 points and 8.0 rebounds for No. 20 UA, which visits UTEP on Saturday.

Discipline does it: Roadrunners’ defensive leader Gross the AHL’s least-penalized player this season

Through the final buzzer of the Tucson Roadrunners’ 2-1 victory over the Colorado Eagles on Wednesday at Tucson Arena, roughly 8,700 penalty m…

He hit .207 with nine homers for Arizona this year.

How former UA Wildcats fared in NBA on Friday night

"I just needed to finally find some downtime to just relax," he says of his post-NFL days.

He was sixth in the nation with 15 assists.

Baylor guard Jared Butler (12) was a role player for the Bears when they beat Arizona last season at McKale Center. He has since developed into one of college basketball’s best guards.

Arizona forward Ira Lee (11), left, loses the fight for a rebound to Baylor guard Mark Vital (11) in the first half of their game at McKale Center, Saturday, December 15, 2018, Tucson, Ariz.