The Arizona Wildcats trotted out a new rotation with new go-to guys and a somewhat new style of play for the first time against an opponent this season on Tuesday, though some of the same old stuff followed along.

That is, injuries and off-court issues.

The Wildcats, who beat Western New Mexico 95-44 in an exhibition game Tuesday behind 20 points from sophomore Brandon Randolph, were playing without junior center Chase Jeter because of an unspecified injury. They also announced before the game that they would be sitting out sophomore forward Ira Lee for their Nov. 7 regular-season opener following his August arrest on suspicion of super extreme DUI.

Meanwhile the Arizona Board of Regents called an executive session for Thursday for the purpose of “legal advice and discussion” regarding the UA men’s basketball program, what UA coach Sean Miller said was a regularly scheduled meeting, after the first federal trial involving college basketball concluded last week.

That might compare with UA’s exhibition game with Eastern New Mexico a year ago, when the federal investigation had resulted in the arrest of then-assistant coach Book Richardson, plus sophomore Dylan Smith was suspended for a violation of team rules and two other players, Rawle Alkins and Parker Jackson-Cartwright, were missing because of injuries.

It’s never just basketball around Miller’s program these days and, while declining to comment on the trial and recent reports that surfaced out of it involving UA, the coach says he’s dealing with the distractions for a second straight season.

“My focus is really caring for the players that are in our program, trying to build a great recruiting class, which we’re coming down the home stretch” of building, Miller said. It’s “loving my wife and kids, enjoying the fact that we live in Tucson and doing the best that we can. We had a game tonight and now it’s about learning from it, growing from it.”

While the Wildcats romped past their overmatched Division II from Silver City, especially while going on a 21-0 run in the first half en route to a 48-15 halftime lead, there were things to work on.

Western New Mexico made the game somewhat more competitive after halftime. Through the first 14 minutes of the second half, UA outscored WNMU only 24-22, gaining a 72-37 lead, though Arizona gradually pushed the lead even higher in the game’s final minutes.

On the opening possession of the game, the Mustangs also sent a message that they can’t let down their guard. Western New Mexico guard Willie McCray started the game with a surprise, stealing the ball from UA guard Justin Coleman and racing in for a layup, although the Wildcats promptly went on a 21-0 run afterward.

Of course, the Wildcats were hardly expected to be perfect, especially right away. Not only are they replacing all five starters but Jeter’s absence was critical to a team that has only four players for two post positions. Without Jeter, forward Ryan Luther was forced to play center while combo forward Emmanuel Akot recorded 22 minutes off the bench inside and even former walk-on forward Jake DesJardins played eight minutes up front.

“Chase is not only one of our best players, and one of our most experienced players, but he really fills a need,” Miller said. “Without him we’re a much different team. But we have three guys who can play that position in a game — Ryan is a touch matchup for opponents when he’s at the five, Ira can play there and I thought Jake did a really good job.”

Miller declined to specify what Jeter’s injury was, and Arizona has made it clear it will guard injuries with even more privacy this season. Jeter was limited by a back injury at Duke although there was speculation this one involved an ankle sprain.

“He’s injured. We expect him back in the short term,” Miller said, declining to say if Jeter might be available for UA’s second exhibition on Sunday against Chaminade. Jeter did go through some pregame shooting drills at McKale two hours before Tuesday’s game.

“We definitely missed his size and athleticism,” Akot said. “But we’re just excited to get him back with us.”

Overall, by showing off the more guard-heavy offense look, the Wildcats survived Jeter’s absence easily. Randolph hit all five 3-pointers he took while adding two assists and four rebounds, taking advantage of the sort of wide-open opportunity he could have this season on a team that lost double-digit scorers in Deandre Ayton, Allonzo Trier, Rawle Alkins and Dusan Ristic.

Randolph averaged just 3.7 points last season as a freshman but could quadruple that number as a sophomore, although he may not have shown that in practices so far.

“Brandon is talented offensively. He’s certainly a very good shooter,” Miller said. “Ironically, through the first week of practice, he hasn’t shot the ball as well as we thought he would or maybe as well as he’s capable. … One thing his shots had in common tonight was he took really quality open 3s.”

Other than Randolph, UA shot just 6 for 21 (28.6 percent) from 3-point range, with freshman guard Brandon Williams was 1 for 6 from long range, but Miller said the Wildcats will be relying more on 3-point shooting this season.

“That doesn’t mean it’s either make or break,” Miller said. “We have to be able to create drives, get second shots, get fouled close to the basket.

Obviously, you put Chase out there, that’s something he does well. But we’re going to depend more on 3-point shooting maybe since I’ve been here.

It didn't count toward the season, but the Arizona Wildcats had their unofficial season opener Tuesday night in a 95-44 win over Western New Mexico. It was the first of two exhibition games the Wildcats will play this season — the next coming Sunday against Chaminade.

Chase Jeter was held out with an unspecified injury, so with Arizona's tallest player on the bench, the starting lineup consisted of Justin Coleman, Brandon Williams, Brandon Randolph, Ira Lee and Ryan Luther.

Randolph had a game-high 20 points on 5 of 5 shooting from 3-point range, while Williams added 14 points, four rebounds and three assists. Sophomore forward Emmanuel Akot finished the night with 10 points on 4 of 7 shooting from the field.

Brandon Randolph on finding his groove

Board of Regents meeting

Sean Miller on Thursday’s Arizona Board of Regents meeting in Phoenix: “It’s a regularly scheduled meeting. I’ve been in contact with Dave Heeke and Dr. (Robert) Robbins.” pic.twitter.com/cSE5cLbvru

Sean Miller on Ira Lee’s suspension for the season opener vs. Houston Baptist: “Ira took it well. ... He’s had a lot of tough things happen to him in a short period of time. I think our support is unwavering to help him through this time.” pic.twitter.com/NQ1kJgdJUQ

Emmanuel Akot on Chase Jeter being out of the lineup tonight: pic.twitter.com/Ylc2f90b4V

Sean Miller on Chase Jeter: “He really fills a need. Without him, we’re a much different team.” Jeter missed tonight’s game with an unspecified injury. pic.twitter.com/Srs7rOdMys

How does Sean Miller handle losing most of his players from a year ago? “Part of keeping the tradition alive is to hold yourself accountable. All we can control is to be the best Arizona team this season.” pic.twitter.com/nFuRDw18GX

Sean Miller on how “coachable” Brandon Williams is: pic.twitter.com/p53xduwlQ8

Who: Chaminade at Arizona, exhibition

The Wildcats open their season with an exhibition against WNMU at McKale Center, Oct. 30, 2018, Tucson, Ariz.

Arizona cruised to a 95-44 win Tuesday night over Division II Western New Mexico in the Wildcats' first of two exhibitions. From the first alc…

Lee was arrested on Aug. 19 on suspicion of super extreme DUI.

Get to know the 2018-19 Arizona Wildcats men's basketball team

The Pac-12 is lightly represented in ESPN's draft class rankings.

Co-captains will use smarts, savvy to help Arizona Wildcats rebound

The Mustangs, a Division II team, made the 3-hour drive to Tucson on Monday morning.

What the college basketball corruption verdict could mean for Book Richardson

Editor’s note: This article is part of the Star’s 2018-19 college basketball guide, which ran in Sunday's paper.

Sean Miller says having Chase Jeter out forced others to adjust.

PHOENIX — A court ruling says the state Department of Economic Security can seize money given as a gift to a prison inmate who owes child support.

Parcels of Arizona Trust Land, including 30 acres in Tucson, to be auctioned

The proceeds will be invested in a fund benefiting K-12 public education.

PHOENIX — A seriously injured 53-year-old woman was rescued after spending six days in the desert, including time in her vehicle which was hun…

Trump: Number of troops sent to border could reach 15,000

WASHINGTON — President Donald Trump said Wednesday that the number of military troops deployed to the U.S.-Mexican border could go as high as …

A leg injury has limited Jackson-Cartwright since his UA career ended.

Confident Allonzo Trier making points on and off court with Knicks

Chaminade will take on the Arizona Wildcats Sunday night in an exhibition game shown on Pac-12 Arizona.

Houston Baptist was one of the few teams with an open date. 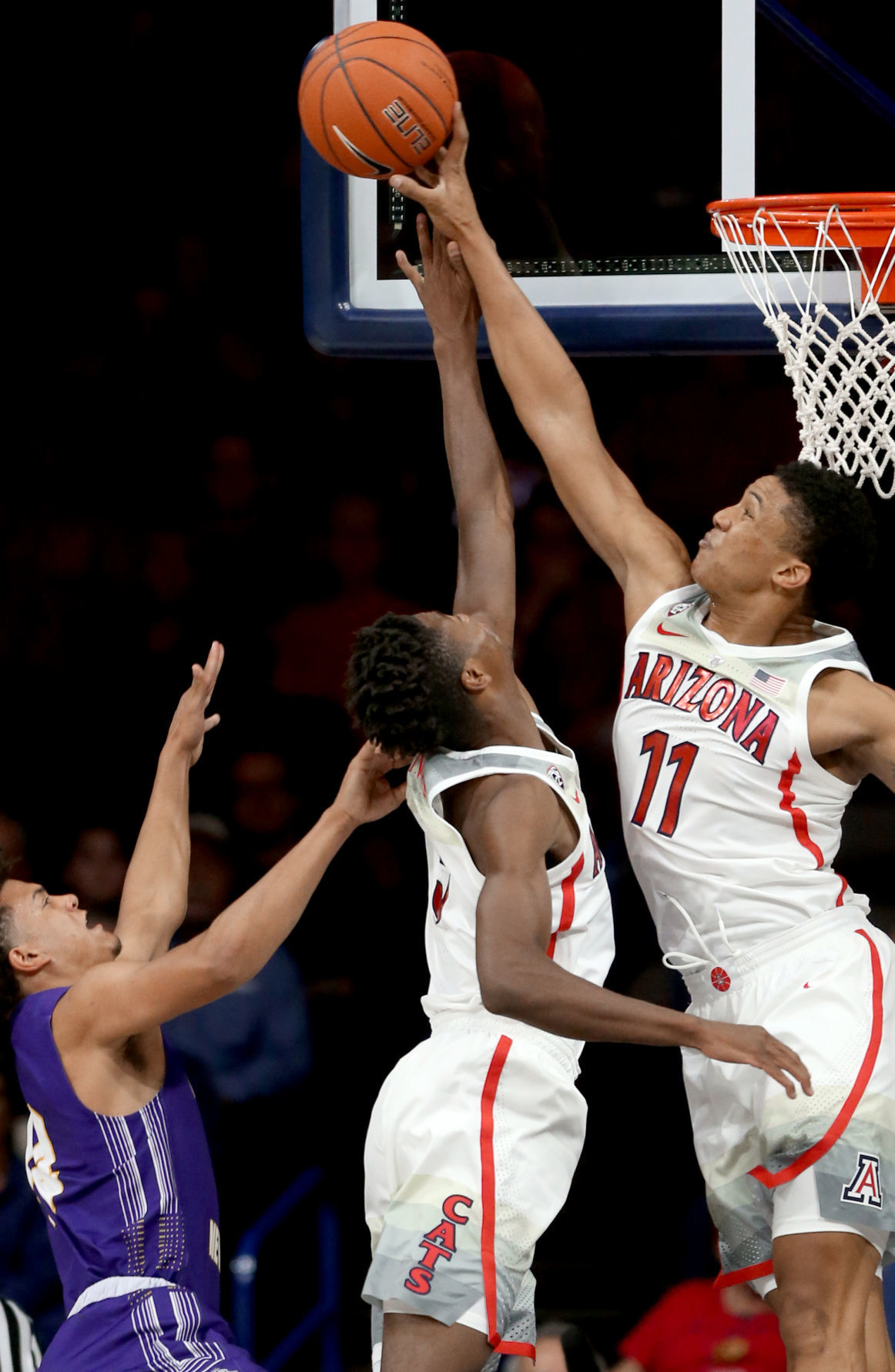 Arizona forward Ira Lee, right, rises above teammate guard Brandon Randolph to swat away a shot from Western New Mexico forward CJ Vanbeekum in the first half of their exhibition game. The Wildcats won 95-44. 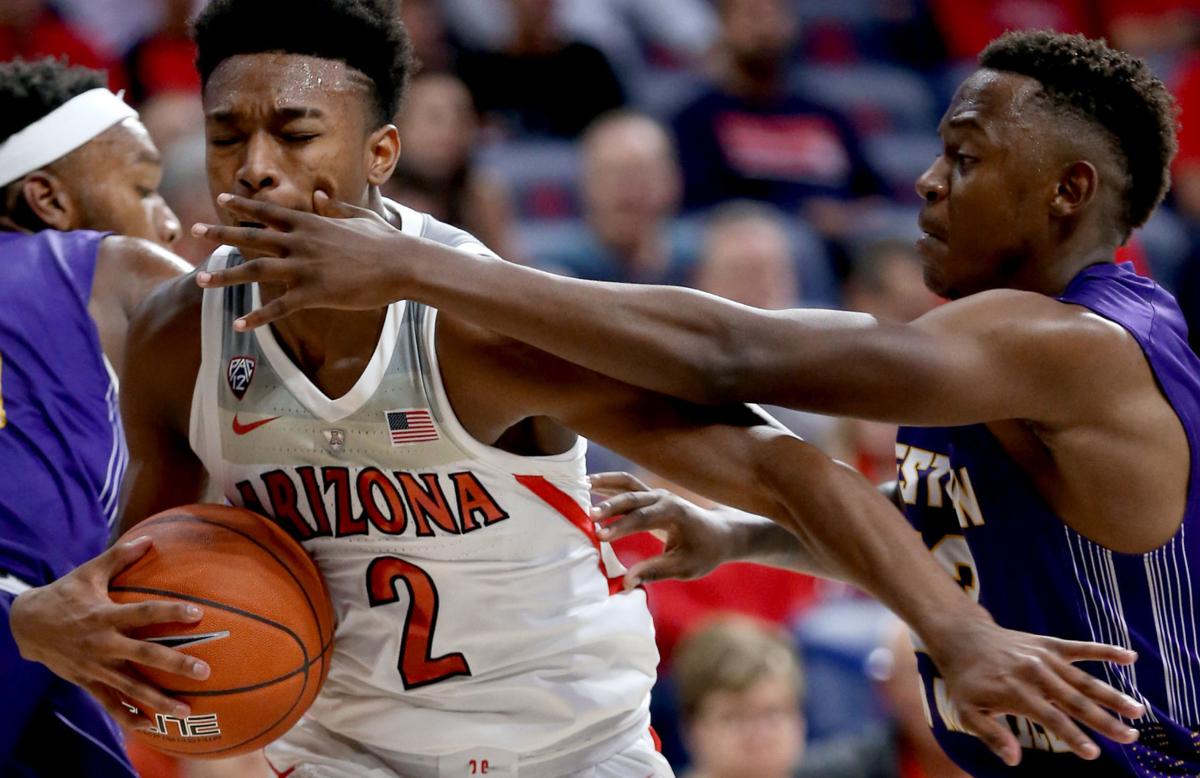 Arizona freshman Brandon Williams gets poked by Willie McCray in the second half. Williams scored 14 points and dished out three assists in 24 minutes. UA hosts Chaminade in another exhibition on Sunday night. 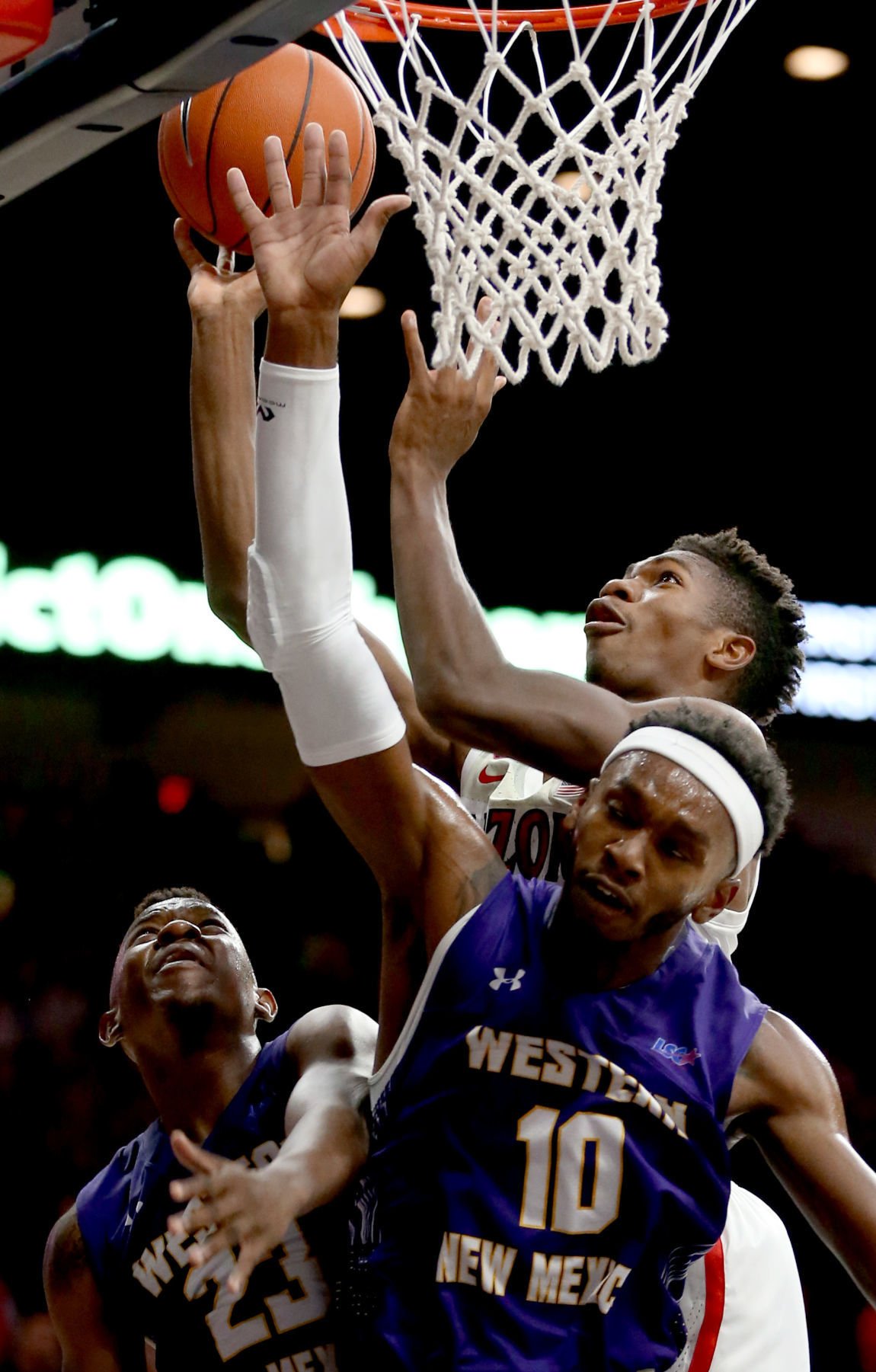