All Adia Barnes has to do is ask and the Tucson community responds.

She put out the call earlier this week to pack McKale Center for Friday’s rivalry game with ASU.

They did just that.

And, so did the Wildcats, who pulled off their biggest win of the season by beating ASU 59-53 Friday at McKale Center in front of 10,160 fans — the largest crowd ever for this rivalry game.

Aari McDonald beats the drum for Arizona’s 16th win of the season. 🥁 pic.twitter.com/iqjHfGYf4w

Arizona ended ASU’s five-game winning streak, while extending its own to three games.

It is the third time in school history that Arizona has beaten a ranked Arizona State team.

The game was as physical as expected. The two teams aren’t shy when it comes to crowding the lanes and getting in each other’s faces.

Arizona took the lead for good in the third quarter. Many Wildcats stepped up, but it was Sam Thomas who sparked them on both ends of the court. She started on offense by driving to the lane to give UA a 31-29 lead with 3:06 left in the third.

She followed with a three from the top of the key. And on the other end of the court she altered shots, got tips, blocks and steals.

She finished with 13 points, three blocks and three steals.

"Without her on the floor, it's hard to win games," Barnes said. ""Sam was the catalyst for a lot of that. She is the most underrated defensive players in the Pac-12...and in the nation."

“Sweeping someone for the first time in 20 years is monumental.” — @AdiaBarnes after Arizona’s win over ASU pic.twitter.com/cWfM94LLHE

And then there was Aari McDonald. She had the biggest and most exciting moments of the game.

At the end of the first half with 2.2 seconds left, UA inbounded the ball to McDonald who took a few dribbles, set and unleashed a shot from well beyond the men’s 3-point line that went in.

The basket got the crowd even more into it and closed the gap to three, as ASU led 23-20 at the half.

"That," Barnes said, "was a huge momentum-builder."

McDonald led everyone with 24 points, 11 rebounds and four steals. McDonald has scored in double-figures in 56 straight games, her entire Arizona career. That is the longest active streak in the nation.

Amari Carter was the other Wildcat in double figures with 11 points.

The big number for UA in the first half uncharacteristically came on rebounds. Barnes said they would be working on rebounds every day, and it showed.

The Wildcats held ASU to 33.3% shooting.

Before the game, UA athletic director Dave Heeke said of Barnes and her call to get fans out, “She sprinkles some magic dust and they come.”

• McDonald was named to another award list Thursday — the Naismith Women’s Defensive Player of the Year. She is one of 15 players nominated. The only other Pac-12 player on the list is No. 7 Oregon State’s Mikayla Pivec.

• The Wildcats were spotted wearing new warm up T-shirts with the word “Culture” on the front and their slogan “Made For It” on the back.

• The UA mall was opened up for free parking two hours before tip Friday night. At that time people were already in lines waiting to get into the arena. 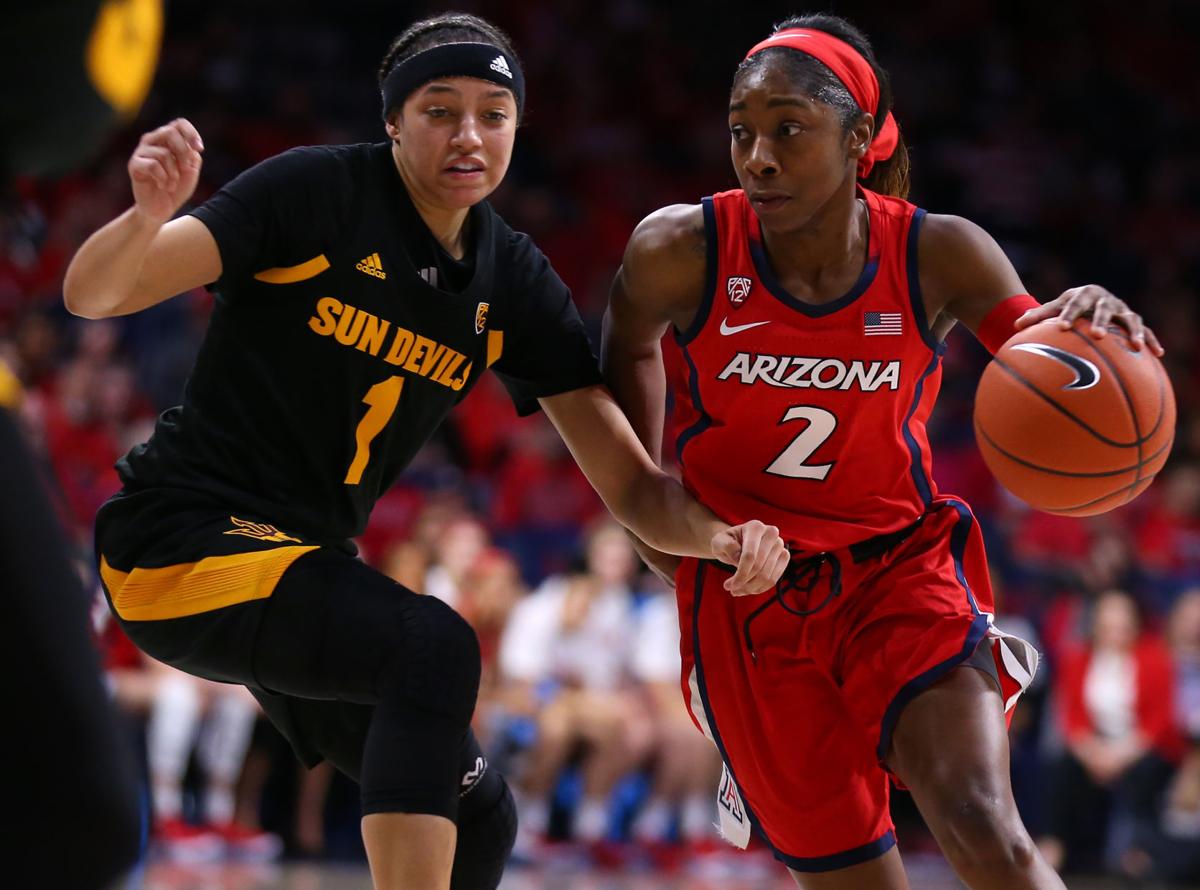 Arizona State’s Reili Richardson tries to block the path of Arizona’s Aari McDonald on Friday night. The Wildcats finished off a season sweep of the Sun Devils in the 59-53 victory. 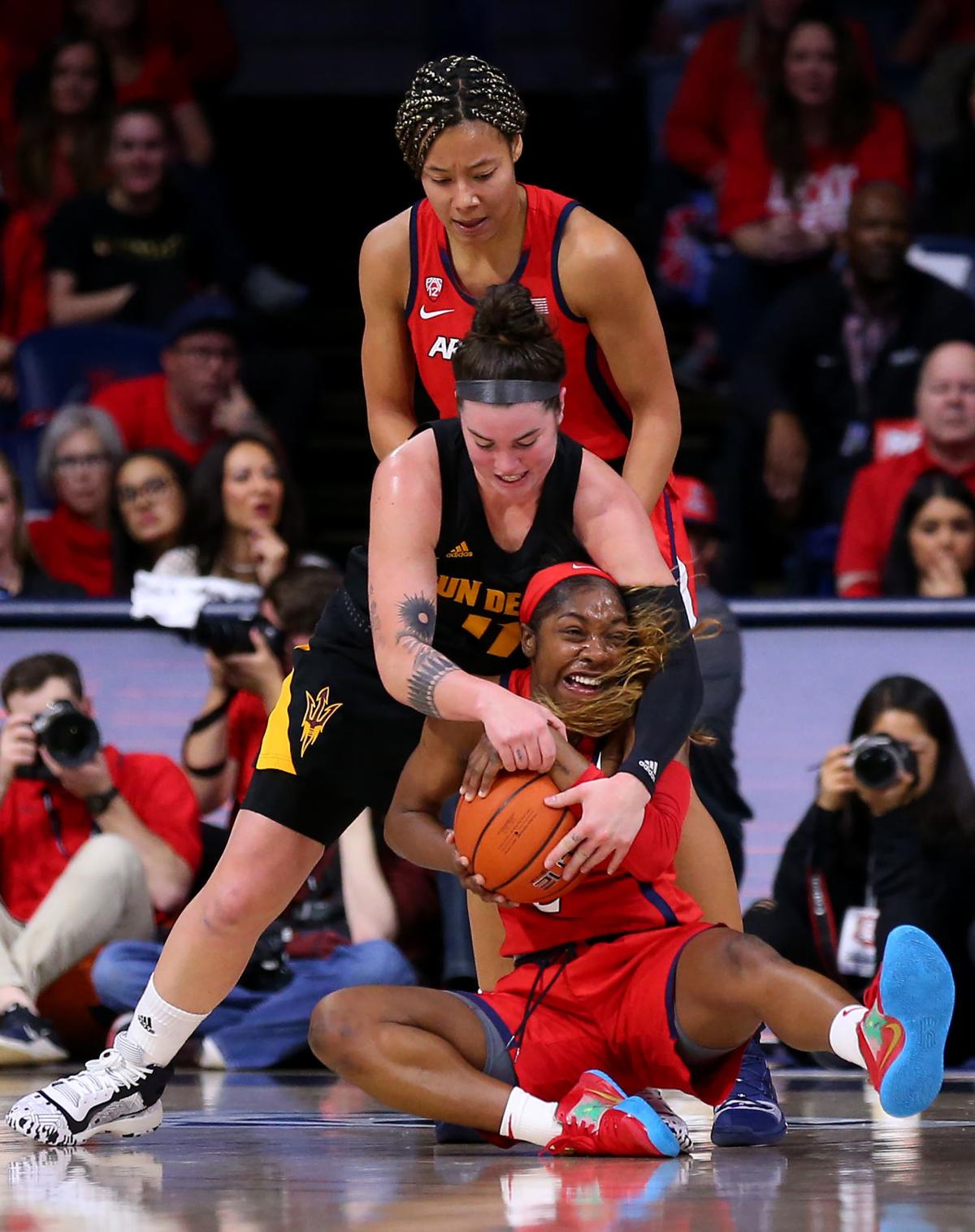 Arizona State’s Robbi Ryan and Arizona’s Aari McDonald fight for the ball during the first half. The Wildcats are 5-3 in Pac-12 play heading into next Friday’s home game against No. 10 UCLA. ASU fell to 5-3 in conference play with the loss. 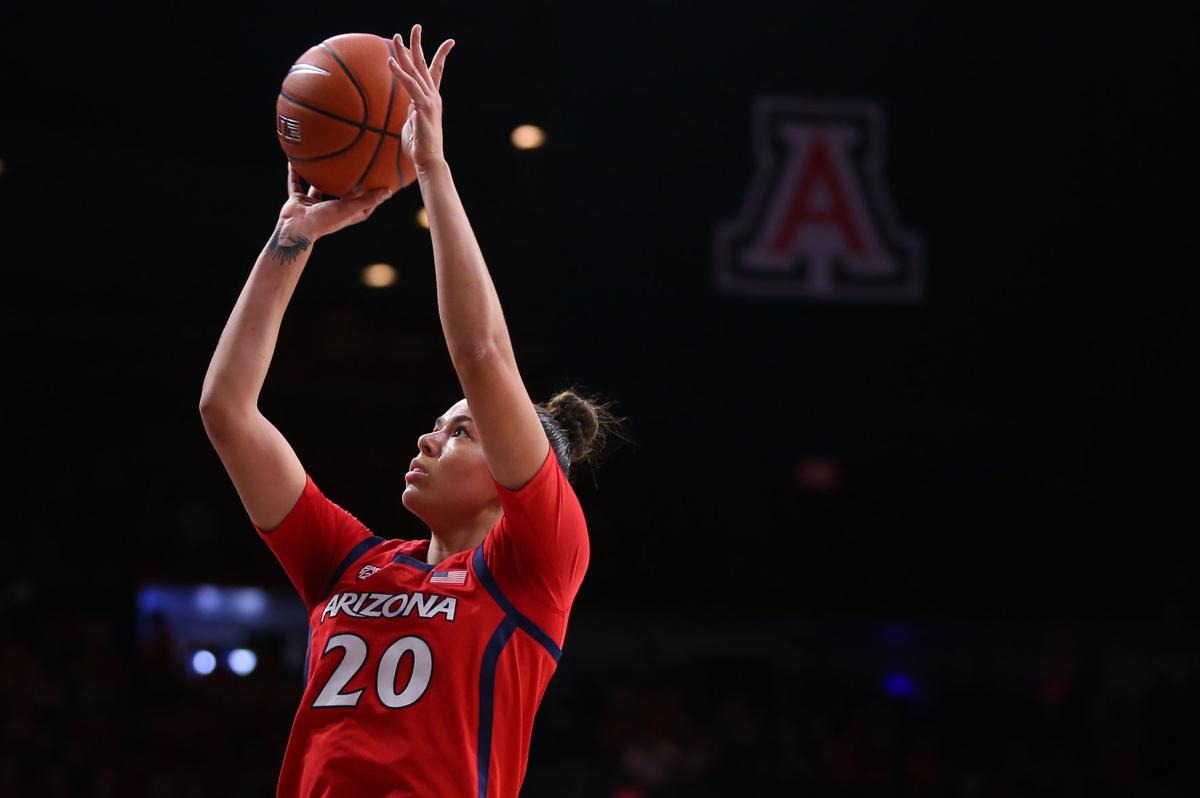