Monday started out like any other day for the Arizona women’s basketball team.

The Wildcats got up early for COVID-19 testing at 7:30 a.m., did homework and participated in online classes. Then it was time for practice.

From there, things got interesting in a hurry.

The Wildcats took over the NCAA women’s basketball’s Instagram account — for the second time this season — to capture their day leading up to the biggest announcement of their UA careers.

That’s because it was the first Selection Monday for the program in 16 years.

Arizona has known for most of the season that it would be a tournament team. However, the questions that remained were what seed the Wildcats would be, what region they were in and who they would play in the first round.

The team gathered alone in McKale Center to watch ESPN’s Selection Show on the Jumbotron. In a typical year, the stands would’ve been packed with their fans, but with the pandemic, the seats haven’t been full all season.

At 4:08 p.m. Tucson time, the Wildcats (16-5) jumped around and cheered as they heard the news: They were a No. 3 seed playing 14th-seeded Stony Brook next Monday in San Antonio.

Thirty minutes after the reveal, the Wildcats were still celebrating. They tweeted out a video with Sam Thomas yelling, “Hey, Arizona Wildcats, we’re going dancing!” Her teammates were dancing behind her.

“It’s an exciting moment — it’s a big day for our program, as well,” Aari McDonald said. “… We’re never going to forget this moment. But now that we’re there, the work doesn’t stop. We got to keep getting better and stay focused in the moment.

“ … It’s a clean slate, zero-zero. Like coach (Adia) Barnes says, ‘it’s not about how you start, but how you finish.’ And like Trinity (Baptiste) said, I feel like we haven’t really proven anything yet. We haven’t done anything. I’m really excited to show what Arizona has, and what we’re capable of doing. I’m just ready to get to work.”

The Wildcats team tied the 1998 UA team for the school’s highest seed ever in the NCAA Tournament. That team, when Barnes played, went to the Sweet 16 — the furthest the Wildcats have even gone in the tourney.

“The great thing for us is (that) we didn’t experience this last year. Last year, we did all this hard work, we had ourselves in a good position, and then it (NCAA Tournament) was all canceled. This year to see it come alive — to sit there and be waiting, and your name is called, this is the awesome feeling.”

Both No. 11 Arizona and Stony Brook (15-5) finished second in their respective conferences – Stony Brook is in the America East conference.

Looking at the path ahead for Arizona to make it to the Final Four, if they were to get past Stony Brook in their first game in Mercado Region, they would play the winner of No. 6 Rutgers vs. No. 11 BYU, then possibly No. 2 seed Texas A&M and then No. 1-seed NC State, assuming there are no huge upsets.

“This week has been preparing mentally just to be ready for what’s next. We plan to be there for a long time in Texas and just we have to be mentally tough,” Baptiste said.

The Wildcats tried to distract themselves in the morning with the IG takeover. Thomas kicked it off then went into the locker room after testing to answer questions: Semaj Smith on who they play next, McDonald on being excited and ready to make noise in tournament, Marta Garcia on international players, Helena Pueyo on being a consistent 3-point shooter and Derin Erdogan on balancing schoolwork with basketball.

In another historic season, the Wildcats finished with this stat line: holding teams to 56 points per game, shooting an average of 36.7%, 10. 5 steals per game and 18.1 turnovers forced per game.

“For me, this is everything I’ve dreamed of as a kid,” Baptiste said. “Growing up in Tampa, UConn used to always play South Florida — 10 minutes from my house — I would always go watch. UConn would dominate and win in the Final Four every year. I just always dreamed of being in that position.

“For me now to have a chance it’s always what I wanted.

Photos: Arizona Women's basketball celebrate their No. 3 seed in the NCAA Tournament

What: First round of NCAA Tournament

The Wildcats will be playing in their first Big Dance in 16 seasons this year.

With four weeks left in the spring season, Arizona's coach is quick to point out that the Wildcats have improved substantially since the beginning of the season.

Here are three things we learned during Arizona's Pac-12 Tournament trip, which included a win over Washington State and a semifinal loss to UCLA.

Arizona's Trinity Baptiste will do 'whatever it takes to win'; Wildcats will need her in March

News and notes from Friday, as the Wildcats prepared for their Pac-12 Tournament semifinal game against UCLA.

Wildcats' Sam Thomas named Pac-12 Scholar-Athlete of the Year; UA to lean on seniors in postseason

Boys basketball teams from Salpointe Catholic and Catalina Foothills will host semifinal matchups tomorrow with a chance to advance to the AIA state championship.

America's most famous basketball fan has posted his NCAA Tournament picks, and he likes the Arizona Wildcats to go far.

'Y’all got a problem to worry about.': Aari McDonald pens letter ahead of NCAA Tournament

McDonald's 1400-word letter was published in The Players' Tribune Thursday and highlights why there's no limit to what the Wildcats can accomplish.

Contract extension 'means the world' to Adia Barnes, who will stay with Cats through 2025-26 season

The news comes four days before Arizona, a No. 3 seed, plays its first NCAA Tournament game in 16 years. 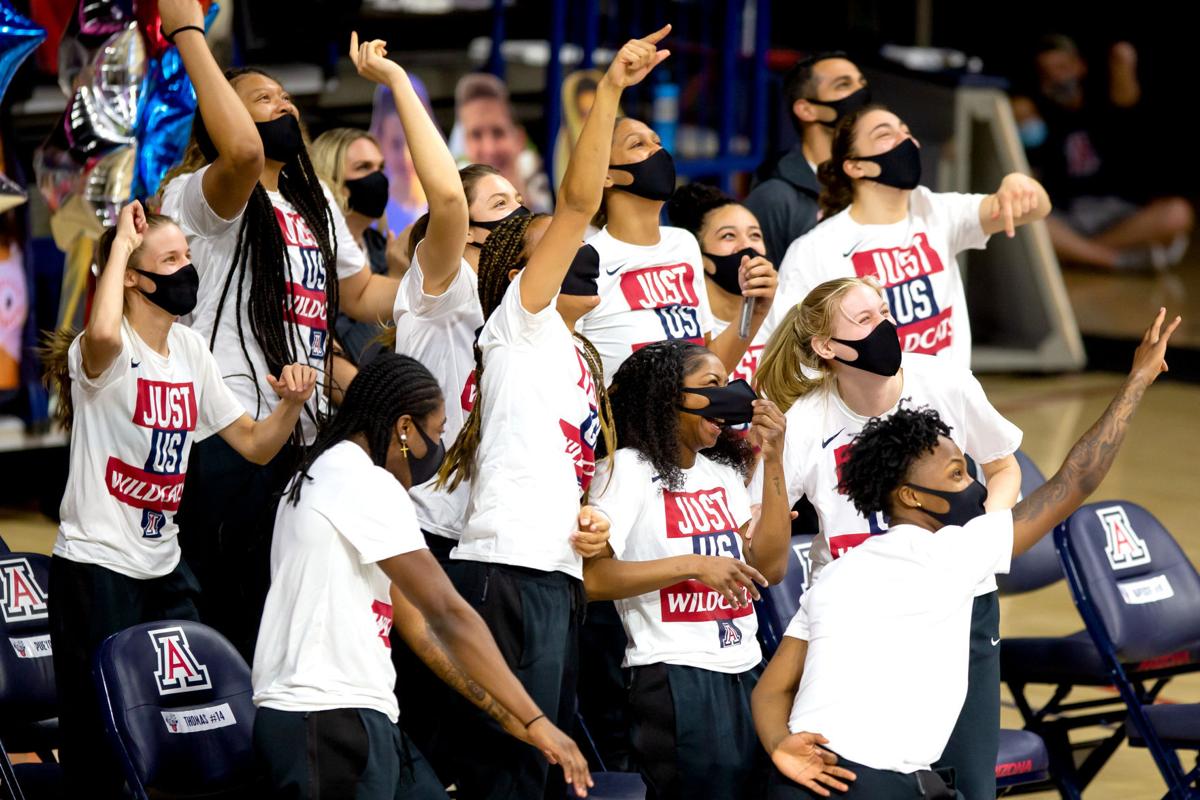 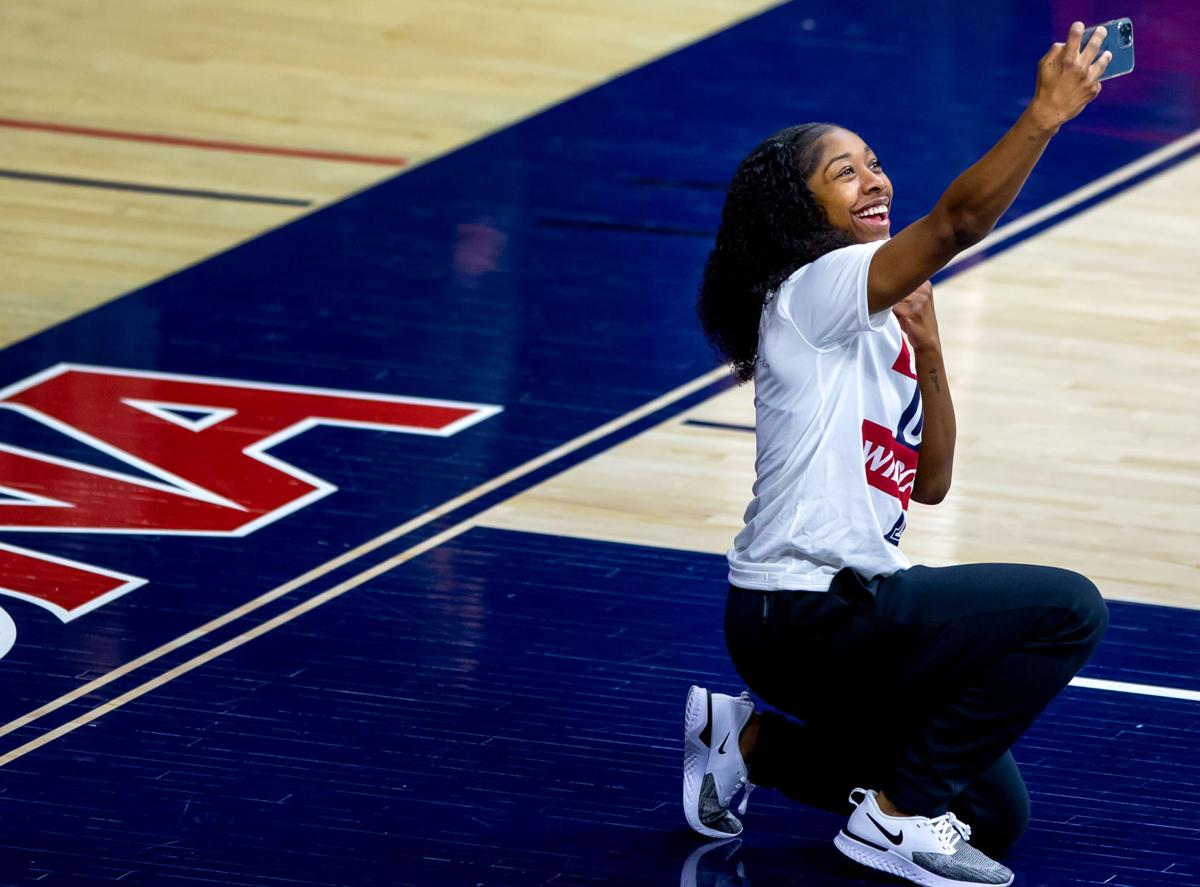 Aari McDonald smiles while taking a selfie video with her fellow teammates for social media during their NCAA tournament watch party at McKale Center, 1721 E. Enke Dr., in Tucson, Ariz. on March 15, 2021. No. 3 seed Arizona Wildcats will play No. 14 Stony Brooke for round 1 of the NCAA Women's basketball Tournament. 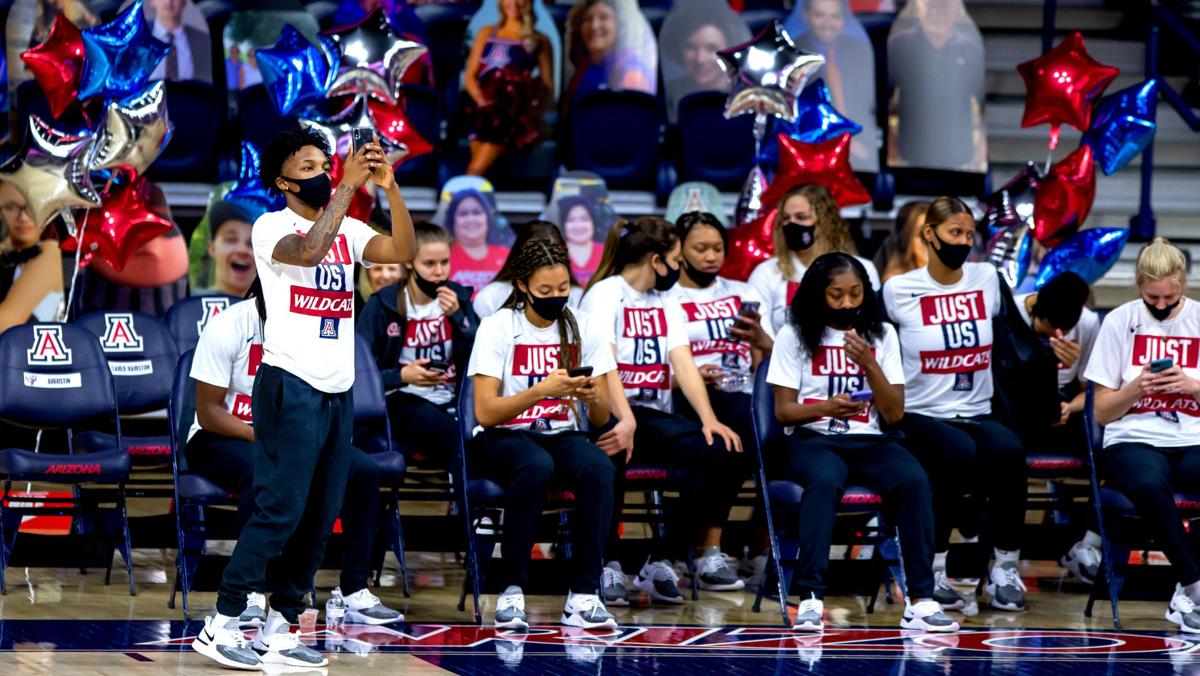 Shaina Pellington, left, takes a video during the Arizona Wildcats NCAA tournament watch party at McKale Center, 1721 E. Enke Dr., in Tucson, Ariz. on March 15, 2021. No. 3 seed Arizona Wildcats will play No. 14 Stony Brooke for round 1 of the NCAA Women's basketball Tournament.