Bennedict Mathurin has been a projected NBA lottery pick basically since the day he stepped back on Arizona’s campus last summer. Dalen Terry’s reported draft stock now suggests he won’t fall into the second round.

And, despite the NBA’s devaluation of 7-footers in recent seasons, Christian Koloko has been still projected to become an early or middle second round pick in Thursday’s NBA Draft.

“I think Christian Koloko is undervalued, frankly,” ESPN analyst Jay Bilas said Tuesday during a Zoom media conference. “I sort of project him more in the first round.”

If so, Arizona could have three players taken in the first round of the NBA Draft for the first time ever.

Despite having 75 players drafted throughout NBA draft history and multiple players taken in 13 NBA Drafts since it went to two rounds in 1989, the Wildcats have only had two first-round picks in four different drafts.

In 1989, Sean Elliott went third and Anthony Cook 24th. In 1998, Mike Bibby was second and Michael Dickerson 14th and, in 2015, Stanley Johnson was eighth and Rondae Hollis-Jefferson 23rd.

Then, two years ago, the Wildcats appeared on the cusp of putting three freshmen players all in the first round. Josh Green went 18th and Zeke Nnaji was 22nd, but Nico Mannion fell to No. 48 overall, well into the second round.

Maybe this time it could be different. Maybe Koloko and Terry both join Mathurin in the first round, where two-year contracts starting at $4 million are guaranteed.

“That would be awesome,” UA coach Tommy Lloyd said. “I mean, at this point, I hope so.”

Producing three high-level NBA Draft picks would go a long way toward easing what has been a rough spring for Lloyd.

Neither Koloko nor Terry were projected to leave for the NBA entering last season and, while Koloko’s stock rose starting in November when his defense helped him earn the MVP of the Las Vegas Main Event, Lloyd still had reason to expect Terry would return earlier this spring.

Then projected as a mid-second round pick, Terry entered the draft but kept open the option to return to school — the belief being that he would come back if not assured of a top-20 selection.

Then Terry rose through the predraft process to become a possible top-20 pick who, at a minimum, could command significant guaranteed money as an early second-round pick. He was gone.

Lloyd said NBA teams value somebody with Terry’s size, length and skills more than a center these days but that he’s also found some teams interested in how Koloko might help them.

“Teams that have a specific need — I know there’s some teams that have had a lot of real interest in Christian and they’ve had multiple conversations with me about them,” Lloyd said. “So I think he’ll be all right on draft night.”

So will Lloyd, probably.

On Thursday, Lloyd likely will get a recruiting boost that could help load his future teams with talent: He’ll be able to tell top targets that he helped put three guys into the 2022 NBA Draft.

Maybe even three in the first round.

“It helps,” Lloyd said of that possibility. “I think it helps everybody. It always reinforces to me that we’re doing the right things, that we’re developing them the right way. And I’m sure it helps recruiting. So, yeah. All good problems.”

Bilas says: “There’s a chance that Mathurin gets drafted higher than he’s projected, including that he could go number five, because he’s such an explosive shot-creator and so good in transition with his speed and power. He’s such a good cutter and he rebounds his position. He’s got positional length. He’s got a 6-9 wingspan (as measured at the NBA Combine) So with his athleticism, length and his ability to shoot the ball, he’s a prototypical NBA wing.”

Bilas says: “Terry is really interesting. He’s another guy who’s crazy long with a 7-foot wingspan. But he does everything, and he really improved as an offensive player over the course of last season. He impacts the game in just about every way. He defends. He’s really active. He can guard multiple positions (and he gets a) number of deflections. He’s also got a really high basketball IQ. He can really see the floor. He makes good passes and he’s a ball-mover instead of a ball-stopper.

“I think he’ll continue to improve, but I think what he’s shown is that he’s got a much higher ceiling than that people thought maybe a year ago and certainly playing on that team (helped last season). And he’s selfless. It’s not about him. He’s willing to do whatever it takes. And that’s certainly what NBA teams are looking for. Not every player is going to be a star in the NBA. He can contribute in a number of different ways.”

Bilas says: “While he is not a guy who’s going to be banging down 3s, he can really defend and he’s not just a shot blocker/shot changer/rebounder. He can switch out on a guard and cover them the entire possession. A lot of big guys will get caught in a switch and they can guard for a couple of dribbles. But if you remember back to the Oregon game at McKale, he switches off on Will Richardson and makes an amazing defensive play, and did the same thing on Jacob Young — twice in the last several possessions (21 seconds) of the game. Arizona doesn’t win that game without Koloko having that ability. So you don’t have to listen to somebody tell you he can do that. You saw it real time in that game. And that’s not the only game he did it. He did it throughout the course of the season.”

Arizona 2023 commit KJ Lewis announced he will transfer from El Paso Chapin High School to Duncanville High School in the Dallas area for his senior season in 2022-23.

Former UA guard/forward Emmanuel Akot announced via On3 and Instagram that he has committed to Memphis after playing the last two seasons for Boise State. Akot left the Wildcats midway through his sophomore season of 2018-19 and sat out until 2020-21 as a transfer.

• More inside: A position-by-position look at this year's draft prospects / Pages C2-C3

A 5-foot-11 point guard from the class of 2024 for Liberty High School in Henderson, Nevada, Thomas drew the attention of UA coaches during Section 7 play at Glendale’s State Farm stadium last weekend. Monday, the Wildcats offered him a scholarship.

Cody Williams was a teammate of UA freshman Dylan Anderson at Gilbert Perry High School in 2020-21.

After a dizzying spring of roster rebuilding, Arizona coach Tommy Lloyd can finally take a breath

During a break in his evaluation of top high school players at the Section 7 tournament at State Farm Stadium, Tommy Lloyd talked about his wild offseason and what's ahead.

Since arriving at Arizona in April 2021, Tommy Lloyd has demonstrated a deliberate and selective recruiting style. He's focusing on Carter Bryant.

A 6-foot-3-inch guard from Portland, Lang has already played four seasons for the Zags.

Here’s a look at every first-round pick from Arizona, when and where they went, and how they fared as pros:

Arizona's Bennedict Mathurin will have late brother on his mind, #domixworld on his feed at NBA Draft

Dominique Mathurin died in 2014 at age 15 after he was hit by a car while riding a bicycle, leaving the 12-year-old Benn without a navigator for the courts or  streets.

Former Arizona guard Shane Nowell announced on Instagram he has committed to UNLV.

Could three Arizona players land in first round of tonight's NBA Draft? Sporting News thinks so

The Wildcats have had 75 NBA Draft picks, but never more than two in the first round. 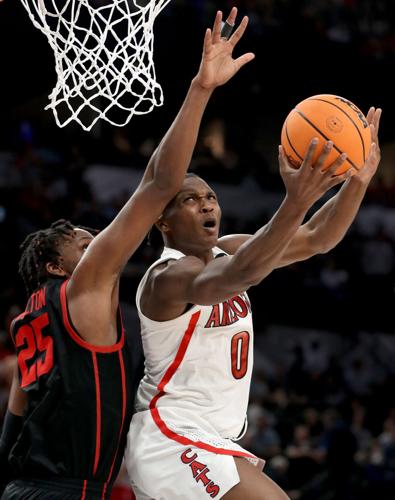 Bennedict Mathurin is expected to be the first Wildcat taken in Thursday’s NBA Draft. The Wildcats could have three first-round picks for the first time in program history. 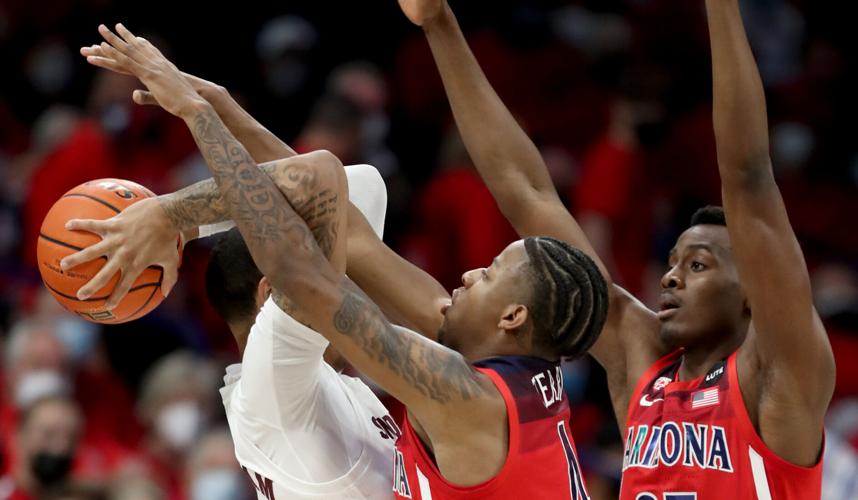 Their defensive ability is a major reason why guard Dalen Terry, center, and 7-footer Christian Koloko, right, could be taken in Thursday's first round.