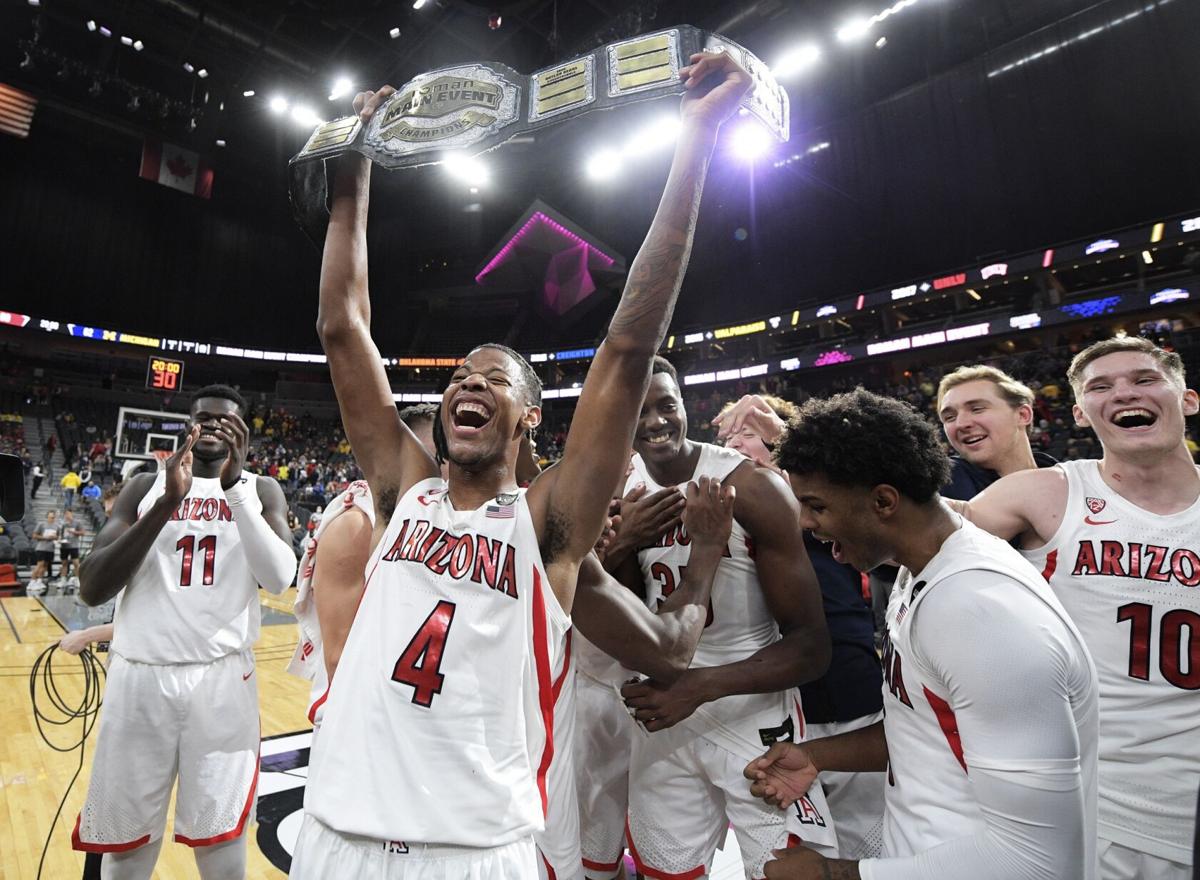 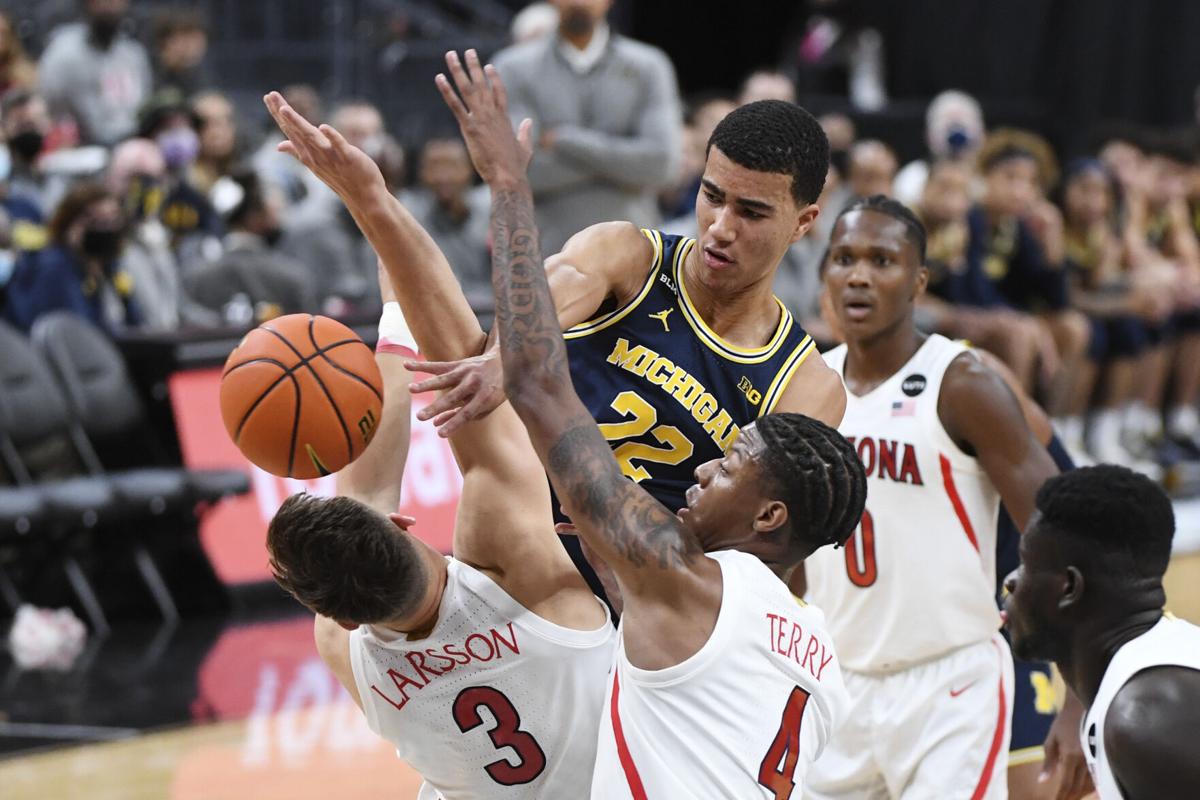 LAS VEGAS -- The combination of new Arizona coach Tommy Lloyd’s free-flowing system and a core of athletic returning talent meant all the Wildcats' early blowouts over NAU, UTRGV and North Dakota State weren’t much of a surprise.

It all happened Sunday, when Arizona pulled off the championship of the Main Event at T-Mobile Arena.

The Wildcats continued their efficient, selfless offensive ways, with five players in double figure scoring and assists on 20 of their 29 baskets. Koloko led the way with 22 points, seven rebounds and four blocks, while Benn Mathurin added 16 points on 7-for-13 shooting.

While point guard Kerr Kriisa shot only 3 for 11 from the field, he also set the tone by dishing seven assists to no turnovers along with four steals. Azuolas Tubelis added 13 points and eight rebounds, while Dalen Terry had 13 points and five assists.

At the end, though, it was Koloko who was given the postgame microphone to dedicate the game to his mom, who had traveled from Cameroon to watch her son play over the weekend. And it was Koloko who picked up the Main Event championship "belt" and carried it out of the interview room.

“For me, it was just another game,” Koloko said, but it clearly wasn’t.

For one thing, Koloko was able to show off his skillset to his mother. “This was the first time she’s seen me,” Koloko said. “It’s just … I don’t know what to say.”

And for the Wildcats as a whole, it was something of a national coming-out party. The game was televised to an ESPN audience and, predictably, the Wildcats and Lloyd drew plenty of praise from national basketball media all over the country on Twitter.

Now 5-0, the Wildcats are also likely to head well into the Associated Press Top 25 poll that will be released Monday, while Michigan dropped to 3-2 after a homecourt loss to Seton Hall, a Main Event win over UNLV and the loss to Arizona. The Wildcats have not been ranked in the AP poll since Feb. 17, 2020, and only Koloko and walk-on Jordan Mains are still around from that team.

Also worth noting: That Lloyd showed up at the postgame news conference wearing a white UA T-shirt, and by now it’s pretty clear what that means.

“This water deal, I don’t know about it,” Lloyd said. “I like to stay in my normal clothes. But they’re excited and they should celebrate, because they played their hearts out and they played with great intelligence.

“And we always talk about swag -- our Arizona swag is confidence but it's backed up with intelligence and effort and they're getting that. They're showing the way they're able to scheme and game plan and start understanding game situations. That's a ton of fun as a coach, because you know the things you're trying to help them with are working and all credit goes to them."

The Wildcats maneuvered their way through what was the third most efficient defense in the country by working the ball inside via ball screens and opportunistically taking what was there. At times, it was a cut by somebody (often Koloko, of course) down the left baseline who would wind up converting a layup or some sort of crowd-igniting dunk.

“Listen, we run some plays, but we play,” Lloyd said. “We have concepts we play out of and these guys have bought into the concepts. We drill them, we coach them and they're embracing them. Yu know, if you turn your head against us, we’re probably gonna cut and that’s a really fun way to play.”

The Wildcats set the tone early, and Koloko used that left baseline to set one of them. Arizona rattled off eight straight points to take a 27-19 lead 12 minutes into the game, capping the run when Koloko slammed in a short loft from Mathurin, who had penetrated well into the lane.

Then, after Michigan’s Eli Brooks hit a jumper, Terry came back with a 3-pointer to put UA ahead 30-23 with four minutes left.

Koloko also did some early damage on the other end. After Michigan jumped out to an early 6-2 lead, Koloko’s 17th block of the season led to the Wildcats’ first lead: He blocked a layup attempt from Dickinson, with Terry picking up the rebound and lofting it to Mathurin over the hoop, with Mathurin throwing in a dunk that gave the Wildcats their first lead of the game.

“I've told you guys forever how good I think C-Lo is,” Lloyd said. “I think he's a problem for anybody. For a while the biggest thing was just making sure he believed it, but I think he believes it now. You're seeing his effort and I see the way his teammates react to him, and it's been a really awesome progression to watch.”

Then there was Kriisa, the Wildcats’ scrappy point guard from Estonia. After spending the weekend getting treatment for bumps and bruises he suffered in the Wildcats’ overtime defeat of Wichita State, Kriisa still went all-out. He picked up a charge by allowing himself to get bowled over in the lane by Michigan’s Frankie Collins, and in the second half turned two steals into assists for UA baskets that kept Michigan further away.

“Give Arizona credit -- they did a really good job of getting anything they wanted when they wanted to,” Michigan coach Juwan Howard said. “That was the only game we’ve played thus far that we've allowed teams to be able to beat us in a paint for 54 points, coming on ball screens and lobs over the top.

But it is getting to be the sort of offense that Arizona is accustomed to. During the postgame news conference, Lloyd was reminded that he had now gone through 31 straight regular-season games without a loss, counting his work as a Gonzaga assistant under Mark Few before this season and the Wildcats’ five games so far this season.

“You’re looking at it way deeper than I am,” Lloyd responded. “I’m not making light of it. I’m just trying to keep it simple in my approach.

“I learned from a great mentor in coach Few and how to come into these games calm. The most important thing is to give your team a great plan and to give them confidence. That's been my focus in getting them ready.”

The Star's Bruce Pascoe breaks down the starting lineups, storylines and stats as the Arizona Wildcats prepare to take on No. 4 Michigan in Las Vegas.

Wildcats blow 16-point lead in second half, then rally to beat Wichita State 82-78 in OT

For Arizona Wildcats, the real season tips off this weekend in Las Vegas

Arizona (3-0) will play Wichita State and either UNLV or No. 4 Michigan in the Las Vegas Main Event.

It’s a new world for college basketball coaches this season, with many staffs adopting the casual look they turned to last season, when empty stands and canned music changed the atmosphere inside arenas at the height of the pandemic.

Arizona center Christian Koloko was given his first Pac-12 Player of the Week award Monday after averaging 17.5 points, 9.0 rebounds and 4.0 b…

'Secret' may be out after Wildcats win Main Event, jump to No. 17 in AP poll

Christian Koloko was named the Pac-12's Player of the Week, too.

It was obvious to anyone how Koloko and the Wildcats dominated then-No. 4 Michigan 80-62 in the championship game of the Main Event in Las Vegas.

After feast in Vegas, Arizona coach Tommy Lloyd hoping Wildcats not too stuffed

“We're not on Easy Street. There's a lot of things we've got to get better at, and those things are going to be addressed and emphasized.”