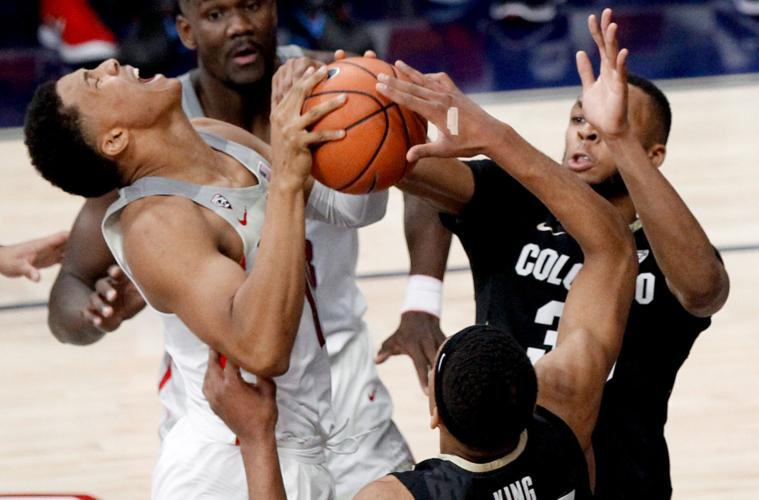 Arizona forward Ira Lee is smothered by Colorado’s George King, bottom, and Dallas Walton on his drive into the paint in the second half at McKale Center, Lee had six points for the UA. 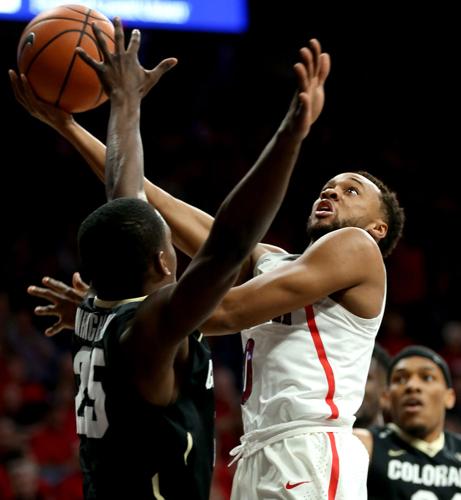 UA guard Parker Jackson-Cartwright goes against Colorado guard McKinley Wright while driving into the lane in the first half. 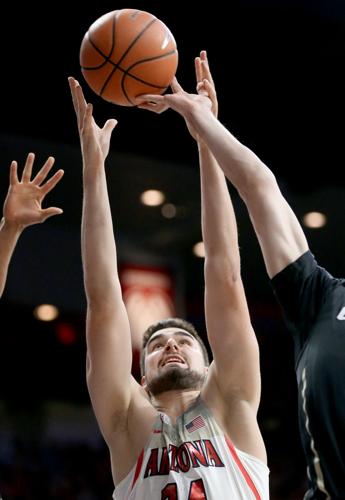 Arizona center Dusan Ristic scored 15 points and grabbed eight rebounds. He electrified the crowd with a spin move in the second half. 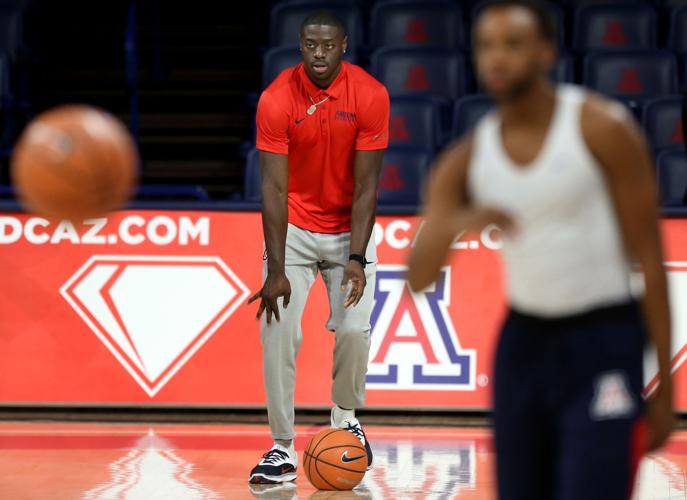 Rawle Alkins’ foot ached again this week, and antibiotics couldn’t do anything about that. So he sat.

But after Deandre Ayton missed a day and a half with strep throat this week, he popped some meds and suited up for Arizona’s 80-71 win over Colorado on Thursday. Then, by hitting all 12 free throws he took, Ayton made sure Colorado coach Tad Boyle was the one leaving McKale Center with his throat hurting.

The Wildcats, who allowed Colorado to shoot 55.8 percent from the field, made up for their shaky defense by getting to the free-throw line 15 more times than the Buffs did, and taking almost full advantage. Arizona made 22 of 23 free throws, while Colorado took just eight and made five.

Boyle yelled and yelled and yelled, at his own guys and, at one point, enough at the refs to pick up a technical. That delighted many in the crowd of 14,644 who were presumably aware of Boyle’s “hell, yes” answer to a question on Jan. 6 about whether beating UA that day felt better because the Wildcats have been under federal investigation.

“They are a great free-throw shooting team,” Boyle said. “We have to do a better job of not fouling and we have to get to the free-throw line more. That big of a differential is a lot to overcome.”

That extra 15 points gave UA more than enough to win in a game played by two traditionally stingy defensive teams who, for the most part, forgot how to do that Thursday.

Arizona shot 53.1 percent after starting the game just 1 for 11, while Colorado made 69.2 percent of its shots in the second half, cutting Arizona’s 12-point lead down to one possession in the final minutes of a game that felt closer than the final score may have indicated.

The Wildcats were toward the end of a 15-4 run to start the second half, after the teams were tied at 30 at halftime, when Boyle picked up his technical. That led to a pair of free throws by Allonzo Trier and they when on to lead 60-50 with just 9:03 to go. But Colorado then scored nine straight points, the last three on a bomb from McKinley Wright, and the game remained within two baskets until Parker Jackson-Cartwright hit a 3-pointer to make it 78-70 with a minute to go.

Jackson-Cartwright was scoreless until that shot, which made him somewhat of a rarity on a night when everyone got buckets. Trier led all players in scoring with 23 points on 8-for-13 shooting despite strong defensive focus on him, while Ayton’s free-throw shooting helped him total 20 points despite going 4 of 10 from the field.

Meanwhile, UA center Dusan Ristic accented his 15 points and eight rebounds with a quick spin move to the basket in the second half that electrified his fans and teammates alike.

“That kind of happened,” Ristic said, smiling when asked about the play. “I wasn’t thinking about it before. It came as a result of the defense.”

It was all good, happy offense for the Wildcats but, well, not exactly the kind of defense their coach would prefer.

“If you liked offense, I think you saw a lot of efficiency,” Miller said, “or bad defense.”

But the Wildcats had some excuses, at least. Their poor early start, which led to 8-2 and 14-4 Colorado leads, came while Alkins was on the bench in street clothes, sitting out the second of the past three UA games with continued soreness in his previously broken right foot.

Their defense could have used Alkins throughout the game, too, with his likely matchup, Colorado wing George King, having scored 22 points on 9-for-12 shooting.

“I’m not gonna ignore that Rawle didn’t play,” Miller said. “We are much better with him.”

While Miller said he thought Alkins would “return sooner rather than later” for UA, maybe even on Saturday against Utah, the absence suggests a level of uncertainty that could continue for a while, maybe even the rest of the season.

Miller said he didn’t know if Alkins will still need management for his foot even in the late season, though he says that Alkins at least does not have a stress reaction or a re-fracture of the foot.

Alkins did, however, experience soreness two weeks in a row. He first felt pain Jan. 15 and sat out Arizona’s Jan. 17 game at Cal and then returned to play 34 minutes at Stanford last Saturday.

Miller said Monday he wasn’t aware of any soreness that Alkins had since the Stanford game but painted a different picture Thursday: He said Alkins was held out all week because of pain that surfaced in the days following that game.

That’s not what the Wildcats want in the short term, but maybe it is in the long term.

“Believe me, he wants to be out there but it’s in his best interest and our team’s best interests to manage this the best way,” Miller said. “I don’t have a vote. It’s up to the doctor, Justin (Kokoskie, UA athletic trainer) and Rawle. When all three of those guys agree that it’s safe for him to return (he will) and if there’s a minute restriction we’ll do that as well.”

UA guard plays one of his best games as a collegian, and it's the main reason why the Wildcats are ranked No. 11 nationally and first in the Pac-12.

Hansen's video notebook: Tad Boyle has the Arizona-Colorado basketball rivalry in a tizzy

Greg Hansen and Star sports editor Ryan Finley look back at the Pac-12's budding rivalry, and where it all started. With the Rocky Mountain sc…

Arizona shot 15 more free throws than Colorado, and made 22 of its 23 attempts.

No. 11 Arizona got its revenge against Colorado and moved to 7-1 in Pac-12 play.

No. 11 Arizona got its revenge against Colorado and moved to 7-1 in Pac-12 play.

The UA sophomore will sit out for the second time in three games.

UA says it has no written records of agents, NBA scouts at Wildcats' basketball practices

Sports agent Christian Dawkins was quoted in the federal complaint saying he attended UA practices "like I'm on the team."

Hansen's video notebook: Vulnerable Pac-12 will struggle to get teams into NCAA Tournament

Nearing the midway point of Pac-12 play, Greg Hansen and Star sports editor Ryan Finley make their picks for which conference teams will be da…

McKinley Wright was supposed to play for Sean Miller's younger brother at Dayton. When Archie Miller bolted for Indiana, Wright took the Pac-12 by storm.

Tad Boyle's comments may have spiced up Arizona-Colorado rivalry

The Wildcast, Episode 70: Who would make a Pac-12 All-Star team?

On a special, All-Star themed episode of The Wildcast, Dominic Baciocco and Justin Spears select their Pac-12 All-Star starters and reserves. …

The Wildcast, Episode 70: Who would make a Pac-12 All-Star team?

On a special, All-Star themed episode of The Wildcast, Dominic Baciocco and Justin Spears select their Pac-12 All-Star starters and reserves. …

Arizona may have to manage Rawle Alkins' foot the rest of the season.

Tucson weather: Friday cool down will lead to a warm weekend

7 arrested in heroin trafficking ring from Tucson to Ohio

FBI agents found large amounts of heroin, cocaine and testosterone at a home.

UA forward didn't play Thursday against Colorado because of soreness in his surgically repaired foot. The Wildcats take on Utah on Saturday.

Arizona forward Ira Lee is smothered by Colorado’s George King, bottom, and Dallas Walton on his drive into the paint in the second half at McKale Center, Lee had six points for the UA.

UA guard Parker Jackson-Cartwright goes against Colorado guard McKinley Wright while driving into the lane in the first half.

Arizona center Dusan Ristic scored 15 points and grabbed eight rebounds. He electrified the crowd with a spin move in the second half.