When Arizona coach Adia Barnes wakes up Monday morning, she’ll go through the same routine she always does on game day.

But this won’t be just any game day.

The No. 10 Wildcats visit No. 6 Stanford in a battle of the two best teams in the Pac-12. The winner has the inside track on claiming the league title, and it’s the first time in the five years Barnes has been at the helm that the Wildcats have been in the conversation as one the best teams in the league.

“My philosophy is never get too high or never get too low — just treating every game the same,” Barnes said. “Because as a player psychologically, if you treat one game bigger, some people rise, some people fold. It’s just better to treat it like that. … For us it’s like any other game.”

Barnes doesn’t like to think about all these stats, although accomplishing them would be nice. Instead, the Wildcats are focused on avenging an 81-54 loss to then-No. 1 Stanford at McKale Center on New Year’s Day.

In this unusual season that has featured numerous postponements, the Pac-12 is looking at win percentage for their regular-season champions. The winner of Monday’s game will be the driver’s seat.

A year ago, UA beat Stanford 73-72 in an overtime game at McKale. It was an upset and an important step in the Wildcats’ growth. Now, they have a shot at taking another big step.

Barnes’ message to her team is that they control their own destiny. While this year has been one of unchartered territory for the Wildcats, against Stanford they find themselves back in a familiar position, with no real pressure. Stanford has more to lose as the higher ranked team that on paper is supposed to win.

Barnes didn’t expect to be here when the season started. This game was never circled on the calendar as a game with such meaning. It was always just another opportunity to play on an ESPN channel — the Wildcats’ third this season.

“No, I didn’t know what to expect,” Barnes said. “I knew we’d be better than last season, but I didn’t think we’d be 15-2 and 13-2 in the Pac-12. But, it feels great. We’ve worked so hard all year to put ourselves in this position. We have a chance to do something special. Our goal is to win out.

“Stanford has dominated for so long and kicked our butts a month ago. But, on any given night we can beat anyone in the country.”

Both teams come in at the top of the conference in scoring defense and field goal percentage defense. Arizona is allowing opponent to score 55.7 points; Stanford is at 54.1 points. UA is holding teams to 36.6% shooting: Stanford is at 33.3%.

“The steals get talked about a lot, but for me they are the results of the tips and deflections,” Bonvicini said. “It’s their disruption of their opponent’s offense. They are in the other team’s head before they start playing.”

Most of those tips come from the Wildcats’ length — the long arms of Sam Thomas, Helena Pueyo and Bendu Yeaney.

Defense is where is all starts for Arizona and it’s the first thing Barnes talked about when sharing the keys to beating Stanford.

“We need to play Arizona defense: Defend the 3-point line better (than last time out), contain the posts inside and box out and rebound,” Barnes said.

On the other end of the court, it will have to be a more balanced attack, with multiple players sharing the scoring load.

In last week’s 75-53 win over Washington, UA hit a record 75% or 12 of 16 from the 3-point line — the second-best percentage of any team in the nation this season. While, Barnes isn’t expecting a repeat performance, she did say that they have to bounce back from Friday’s 3-of-15 outing against Cal.

Stanford coach Tara VanDerveer, who is known for playing the percentages, won’t be guarding them on the perimeter.

“We have to play the way we play — play as a team and have a balanced attack, not just Aari scoring,” Barnes said. “We have to be in attack-mode on each possession. Take shots we want, not the shot they dictate.”

As someone who has won her share of league titles among her more than 700 wins as a coach, Bonvicini said it’s never easy, and even harder this season with the extra challenges of playing during a pandemic.

“It takes a lot of mental preparation, you have to be really focused,” Bonvicini said. “Adia has done a fabulous job in a very difficult year. I can’t imagine having to prepare for a game then not knowing if you will actually play until the day of the game.

“Adia and her staff have done an exceptional job keeping her players engaged.

“To beat Stanford, they have to stay in the moment and not take any plays off. I learned early on that you can’t beat Stanford playing their style. To beat them you have to do it different. You have to pressure them, slow them down and make them take tough shots.

“Can Arizona beat them? Yes. It will take an exceptional effort, but that’s how you win big games and championships.”

Stanford is so deep, it’s hard to pick just one or two key players. They have four players averaging double figures plus another one that is close, with nine points. Nearly all of the top six scorers for the Cardinal are on national watch lists for awards this season.

Stanford was the third overall team in the Top 16 reveal last week.

Fifth-year senior Anna Wilson is a starter and known as a lock-down defender. Last time out, she helped trap UA's Aari McDonald to take her out of her usual game. She is also connecting on 42% of her 3s.

All-American Kiana Williams, who is up for the Naismith, Wade and Anne Meyers Drysdale awards, is the Cardinal’s go-to player when they need big shots. Who could forget her buzzer-beater against Colorado last season — a 40-foot shot after stealing an inbounds pass? Williams is hitting 42% of her shots from the field.

Sophomore Haley Jones — the No. 1 recruit in the country, two years ago — leads the league in rebounding (162 total) and shoots at a 55% clip. She is also up for the Naismith and Cheryl Miller awards.

Junior Lexie Hull is on the Naismith and Wade Trophy award watch lists. She does a little of everything from scoring (11 points per game) to steals (36) to rebounds (4.6 per game).

Freshman Cameron Brink played her way into the starting lineup after Stanford lost to UCLA. She leads the league by hitting 60% of her field goals and is third in rebounding with 144 total. She is up for the Katrina McClain award.

Stanford is so loaded that Fran Belibi — the dunking sensation — is coming off the bench. She is also up for the Katrina McClain award. She’s hitting 55% of her field goals.

Pac-12 Tournament's tweaks include an earlier start, day off before title game

The latest news and notes from the Arizona women's basketball team.

“He listens to us and our bodies,” Lauren Ware says of Arizona's new strength coach. "He gives us a target range, so our bodies won’t be tired the next day. It helps a lot.”

Aari McDonald keeps getting better at the little things, and the 10th-ranked Wildcats appear tournament-bound

The 10th-ranked Wildcats got one step closer to that Monday night, when the NCAA Selection Committee announced its top 16. If the NCAA Tournament were to be held today, Arizona would be a No. 2 seed.

The transfer from Virginia Tech would be eligible to play next season, but she hasn't made up her mind about returning to Arizona.

Aari McDonald and Sam Thomas both pour in 20 points as No. 10-ranked Wildcats clobber Huskies 75-53.

Madison Conner, a 5-foot-11-inch guard, enrolled early to get started on her college career.

UA coach Adia Barnes said the Cardinal "force you into your weaknesses.”

'This is the last year you will see me in an Arizona jersey': Aari McDonald will turn pro after season

Aari McDonald, arguably the greatest player in the history of the Wildcats' program, could have stayed for one more year. But her mind is made up. 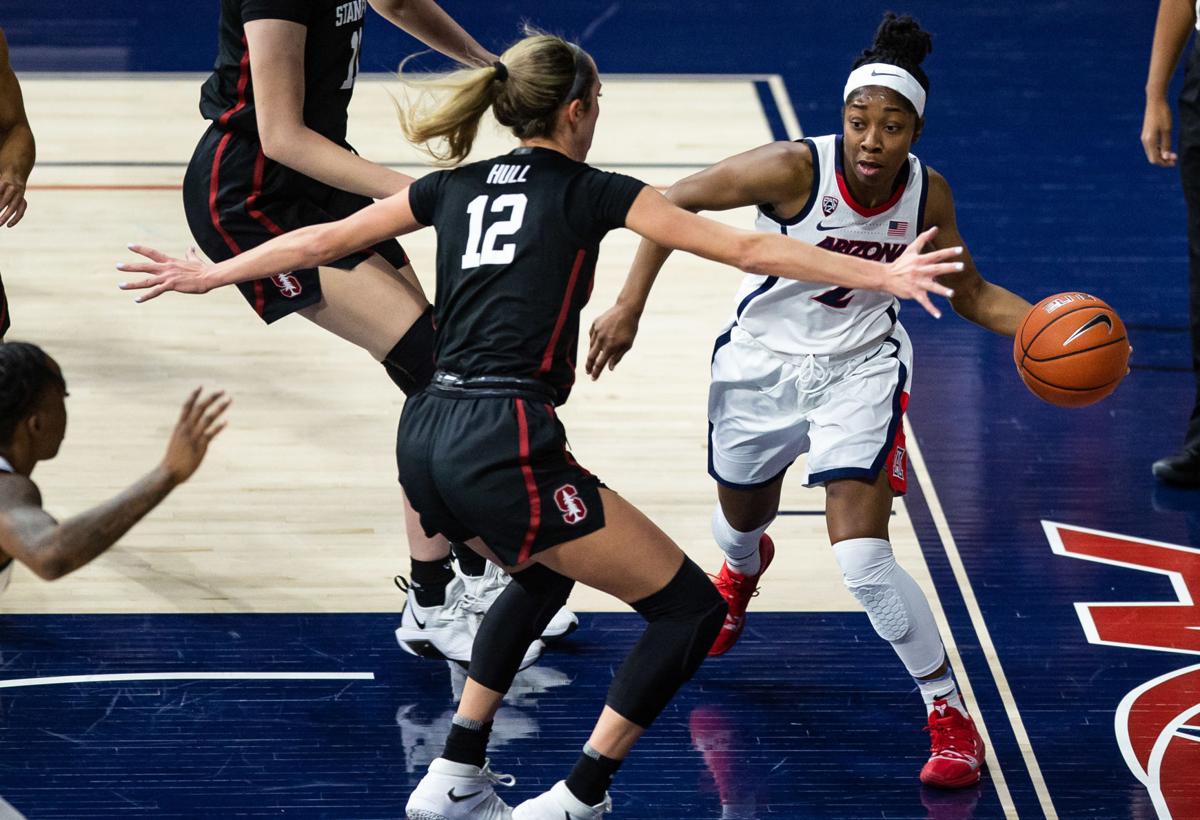 Aari McDonald, right, and the Wildcats lost by 27 to Stanford on New Year’s Day, but UA still has a chance at a Pac-12 title going into the rematch. 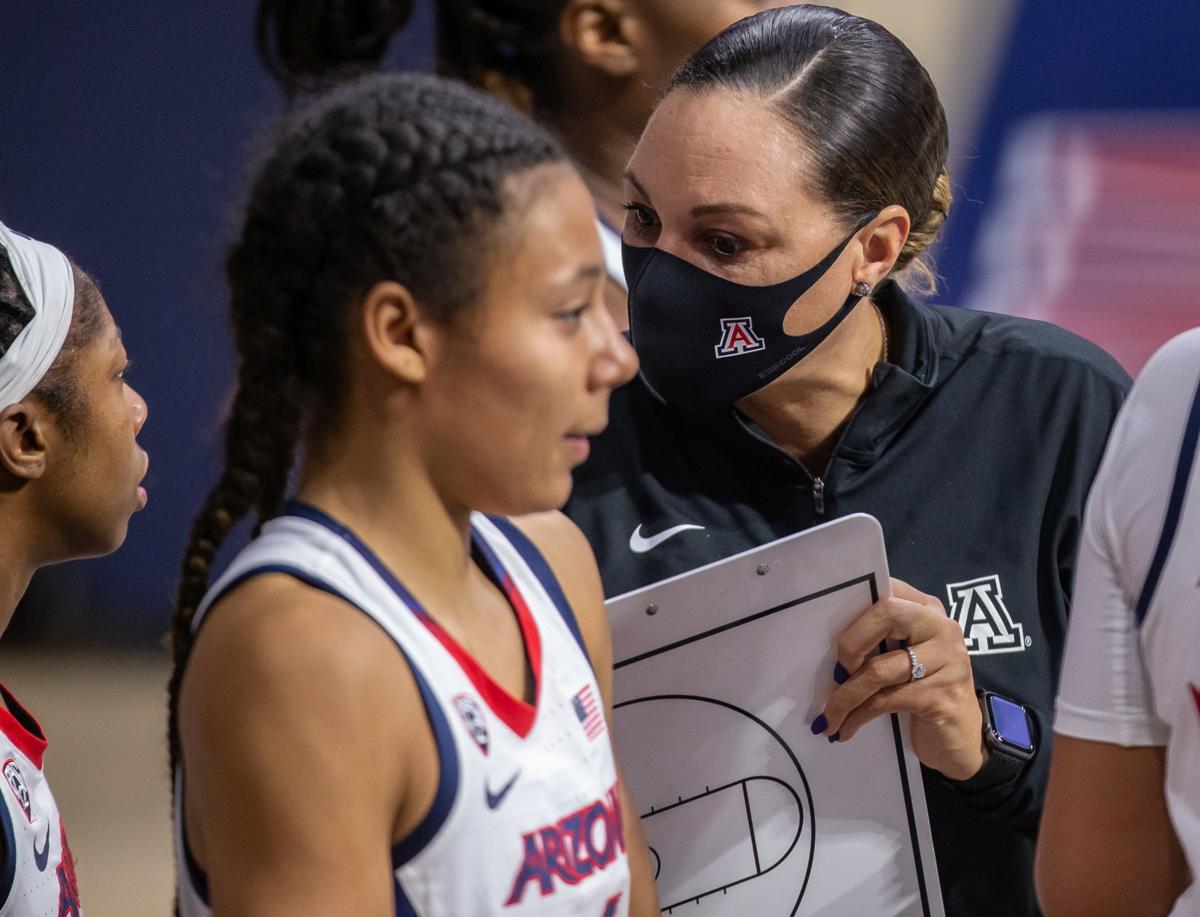 Arizona Wildcats head coach Adia Barnes talks with her team during a timeout in a game against the Stanford Cardinal at the McKale Center, on Jan. 1, 2021.