Read Today's E-Edition
Share This
Arizona Wildcats win, but lose Parker Jackson-Cartwright for 'considerable amount of time'
Share this
1 of 2 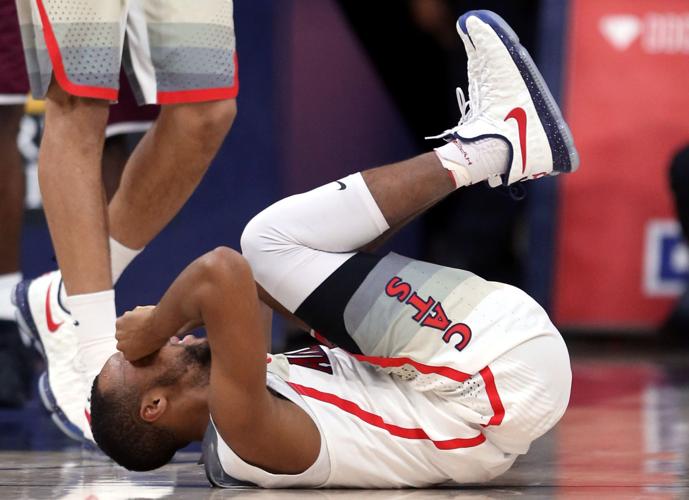 Arizona guard Parker Jackson-Cartwright (0) curls up on the court after getting tangled with Texas Southern guard Dulani Robinson (11) in the first half of their game at McKale Center, Wednesday, November 30, 2016, Tucson, Ariz. Kelly Presnell / Arizona Daily Star 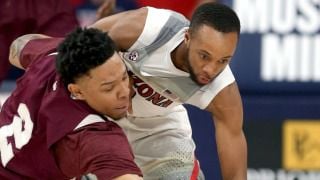 The Arizona Wildcats beat Texas Southern 85-63 Wednesday at McKale Center but, as is often the case with the Wildcats this season, it wasn’t about the final score.

It was about another player who went missing.

He did not return to the bench for the rest of the game, suggesting he was being examined by doctors and undergoing X-rays or other medical tests.

Coach Sean Miller said after the game that Jackson-Cartwright will be out "for a considerable amount of time."

As far as the game itself, the Wildcats never had much trouble, taking and holding a double-digit lead after the first five minutes.

Arizona did it with defense , holding Texas Southern to just 39-percent shooting (32 percent from three-point range), and by shooting 63 percent themselves thanks in large part to another eye-opening performance from freshman Lauri Markkanen.

The big man from Finland scored 19 points and had six rebounds while making 5 of 6 three-pointers. Arizona made 8 of 14 threes overall.

Arizona also outrebounded Texas Southern 33-27 and outscored the Tigers in the paint 40-22, but was only able to take 10 free throws and hit just five of them.

The Wildcats expanded a 45-26 halftime lead to up to 23 points in the second half but had trouble pulling further away without Jackson-Cartwright. Texas Southern pulled within 70-57 after going on a 7-0 run that featured a three-pointer from Jamie Rutherford, a tipin by Derrick Griffin and a layup by Zach Lofton.

In the first half, Markkanen had 11 points with three three-pointers to help Arizona Wildcats take a 45-26 halftime lead.

Jackson-Cartwright's absence forced the shorthanded Wildcats to play walk-on Tyler Trillo briefly in the first half, and Trillo also made an appearance early in the second half.

Arizona jumped on Texas Southern right away, holding the Tigers to 1-for-5 shooting and helping create three turnovers while building a 10-2 lead over the first four minutes.

The Wildcats went on to build a 25-9 lead on two straight three pointers from Markkanen, and never led by single digits the rest of the half.

The Wildcats wound up shooting 57.1 percent from the field while holding Texas Southern to just 37 percent. The Tigers also made just 2 of 11 three-pointers.

Coach says visiting Texas State would be 'more than happy' to pull off upset Wednesday night.

The junior point guard has brought Arizona stability at the point, with a 3.6-1 assist-turnover ratio, though the UA offensive broke down late…

Arizona guard Parker Jackson-Cartwright (0) curls up on the court after getting tangled with Texas Southern guard Dulani Robinson (11) in the first half of their game at McKale Center, Wednesday, November 30, 2016, Tucson, Ariz. Kelly Presnell / Arizona Daily Star