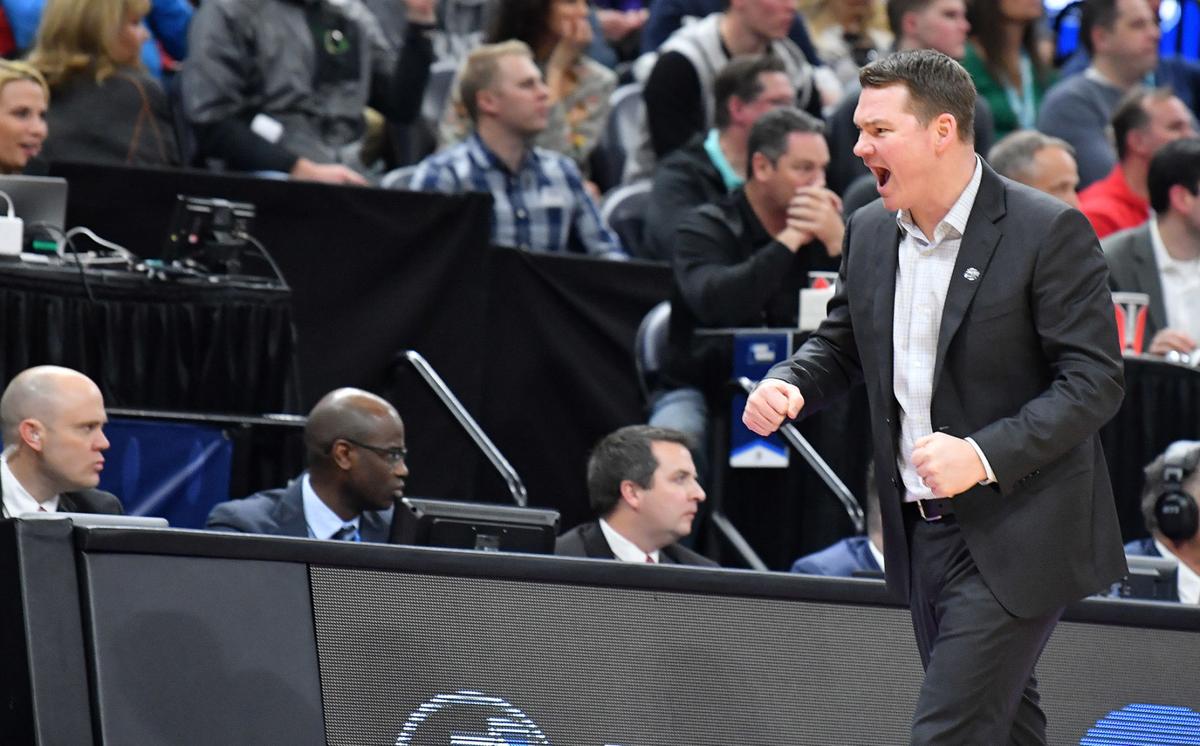 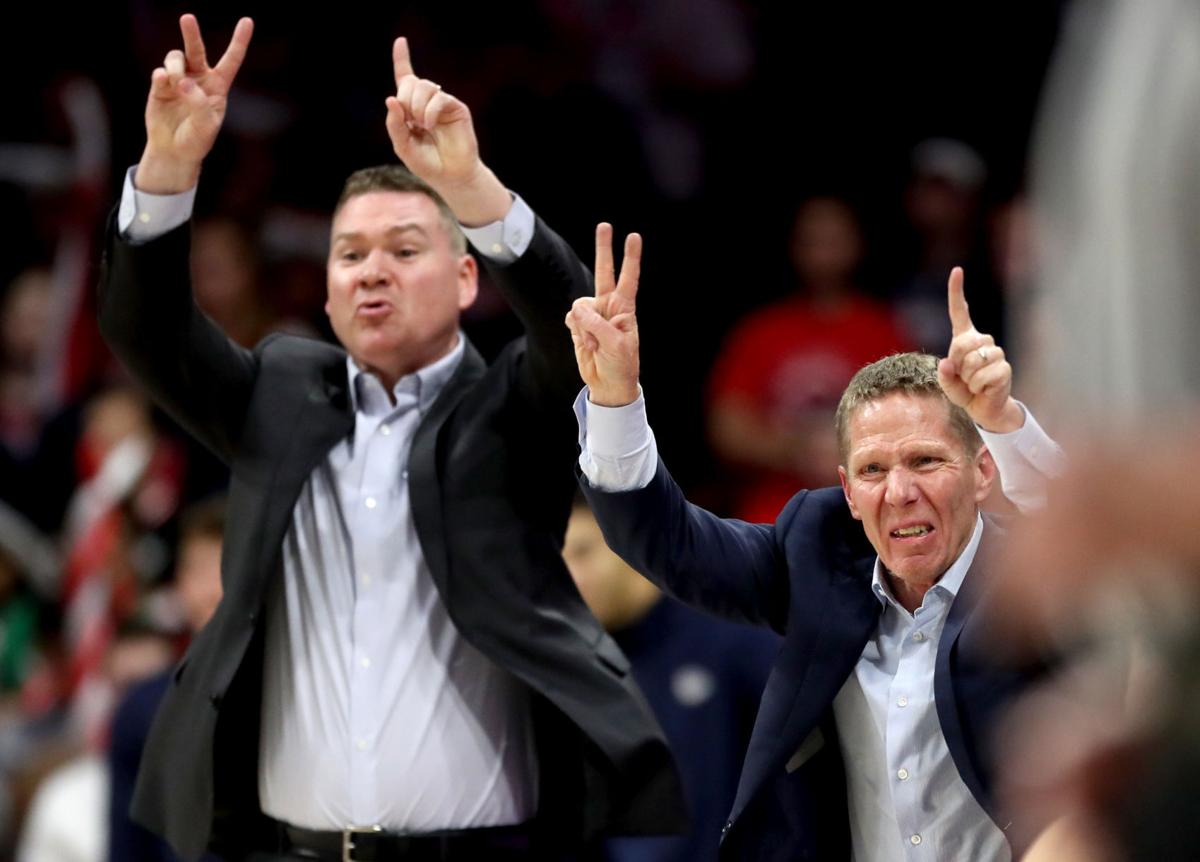 The UA said Wednesday afternoon that Lloyd will receive a five-year contract, the maximum available under Arizona Board of Regents guidelines, pending board approval. Lloyd made roughly $1 million at Gonzaga. Arizona paid Miller $2.5 million annually in school funds, plus another $400,000 from Nike and IMG.

In a statement, Lloyd said he was extremely grateful to UA president Robert C. Robbins and athletic director Dave Heeke for the opportunity, and embraced the challenge despite the "potential obstacles ahead" for a program that is facing a still-pending NCAA infractions case.

Heeke said he was "thrilled" that Lloyd would be restoring UA to an elite position in college basketball. Lloyd will be introduced in a news conference Thursday afternoon.

"After speaking with a tremendous pool of candidates, and with so many in and out of the college basketball world, it became clear that Tommy has the passion, the experience, the knowledge, the coaching and recruiting acumen and the drive to lead us to championships," Heeke said.

"He has been a big part of the incredible rise and success of Gonzaga Basketball and is well-respected for his partnership with that program's head coach, Mark Few."

Arizona also interviewed several former Wildcats players, with Georgia Tech coach Josh Pastner getting the most interest among them, while BYU coach Mark Pope also received strong consideration. Arizona discussed the job with Arkansas coach Eric Musselman, but he was already nearing a contract extension that will pay him $4 million annually. He signed the deal Wednesday.

But Lloyd had been considered a leading candidate for the job since Miller was fired April 7 in the wake of UA's NCAA infractions case.

While UA has not hired a head coach without head coaching experience since Fred Snowden took over the Wildcats in 1972, Lloyd is viewed as one of the country’s top assistants, an architect of a perennial power that was undefeated this season until losing to Baylor in the NCAA title game.

Lloyd is also highly regarded for his player development and game strategy, having helped devise an offense that was the best nationally in offensive efficiency last season.

“The style changed over the last decade, and a lot of that has to do with Tommy,” former Gonzaga star Adam Morrison told Sports Illustrated in a story that posted earlier this month. “And I’m not just saying that to make him sound good in an article. They run pro-style, European-style stuff — space, movement, efficiency — and that’s Tommy Lloyd, the influence.”

The Zags have also been able to mix in top domestic recruits, most notably five-star Minnesota guard Jalen Suggs last season. But bringing four- and five-star talent to the school of 5,000 in a midsize Eastern Washington city wasn’t so easy early on in Lloyd’s tenure.

"What's that saying? 'Necessity is the mother of invention,'" Lloyd told ESPN toward the end of the 2019-20 season. "We needed players, good players because we wanted to build this program. And we were worried at the time, some kids might not think Gonzaga was established enough and they might say they wanted to go to the Pac-10, I don't want to go to little ol' Gonzaga ... We had to think outside the box, we had to fish in waters that others weren't."

Lloyd’s prominent role with the Zags meant he was frequently mentioned as a head coaching candidate elsewhere.

Gonzaga athletic director Mike Roth told the Spokane Spokesman-Review this week that Lloyd received significant interest from multiple schools every year for the past several springs. Gonzaga moved to keep him, making Lloyd one of the highest-paid assistants in the West and the heir apparent to Few, 58. School officials wrote a clause into Lloyd's contract stating he would be the Bulldogs' next head coach.

Lloyd had also indicated he was in no hurry to leave Spokane, telling ESPN toward the end of the 2019-20 season that he would be happy being in the same situation as Bill Guthridge, a longtime North Carolina assistant who coached the Tar Heels for only three seasons after legendary coach Dean Smith retired.

A 1993 graduate of Kelso High School in Washington, 50 miles north of Portland, Lloyd attended Walla Walla Community College for two seasons, becoming an all-region selection in 1995. He continued at Whitman College in Walla Walla, earning a degree in biology and a secondary teaching credential. Lloyd went on to play two seasons overseas, with stops in Brisbane, Australia, in 1997 and Dusseldorf, Germany, in 1999. According to Sports Illustrated, he then took six months off to travel the world and volunteered at Gonzaga before joining the Zags’ staff full-time in 2001.

For his new Arizona staff, Lloyd is expected to consider retaining UA associate head coach Jack Murphy. Lloyd and Murphy have had a long relationship and are both experienced recruiters on the international circuit, while Murphy is a UA graduate who has served many roles under Lute Olson and Miller. He was also NAU’s head coach for seven seasons.

Assistant coach Jason Terry could also return, though it isn’t clear if the former Wildcats and NBA star would be interested. Terry, who interviewed for the head coaching position, has not returned messages seeking comment.

Whoever joins Lloyd’s staff won’t have any time to waste in recruiting. Arizona has already lost guards Jemarl Baker and Terrell Brown and forwards Ira Lee and Daniel Batcho to the transfer portal. Freshman Kerr Kriisa told ESPN on Wednesday that he will be doing the same, though it's possible he returns.

That leaves nine players on the current roster counting James Akinjo, who is testing the NBA Draft waters. The three high school players the UA signed last fall are all tentative: Guard K.J.Simpson has been expecting his release, while wing Shane Nowell was waiting to see who the new coach is and guard Shane Dezonie has not responded to messages. Arizona reportedly secured a commitment from Eastern Washington forward Kim Aiken a day before Miller was fired.

Lloyd will also have to steer the Wildcats through whatever upcoming NCAA sanctions are added to the school's self-imposed postseason ban. If UA’s case is judged to be in the category of “Level I aggravated” — and the NCAA's Notice of Allegations listed far more aggravating than mitigating factors — the NCAA’s penalty matrix calls for a postseason ban of two to five years.

The NCAA issued a Notice of Allegations to Arizona in October that contained five Level I charges, including four involving Miller and his former staffers plus one against UA for a lack of institutional control. Robbins and Heeke were also cited as aggravating factors for compromising the integrity of the investigation.

After receiving the NOA on Oct. 21, the school requested its case be moved off the standard NCAA resolution track to the new Independent Accountability Resolution Process.

Created in the wake of the federal investigation into college basketball, the IARP currently is processing cases from six schools and has not yet completed any. There is no public timetable for any of them to be finished, suggesting Arizona may not know if it faces additional allegations anytime soon.

"While there are certainly potential obstacles ahead for our program, I embrace the challenge as we will build on the foundation in place to compete for Pac-12 and national championships," Lloyd said in UA's statement. "I know how much Arizona basketball means to the institution, its fans, its community and the state, and I cannot wait to get started. That work begins now. My family and I are excited to settle in Tucson and begin a new chapter."

As Arizona Wildcats' coaching search drags on, former players push to keep it in the family

"There are so many good options!" Nick Johnson told the Star in a text message from Turkey, where he is playing this season. "Coach Stoudamire would be amazing there."

Plus, Nick Johnson says Damon Stoudamire would be "amazing" as the Arizona Wildcats' next head coach.

"When it comes to Arizona alums, we're (expletive) bright," Gilbert Arenas said. "Any one of us will do that job."

He is survived by four children from his 61-year marriage to Betty Larson, who died in 2017. A memorial service has not yet been scheduled.

New Wildcats coach Tommy Lloyd to earn $2.9 million per year — the same as Sean Miller made

Tommy Lloyd will get additional years if the NCAA issues sanctions against Arizona. 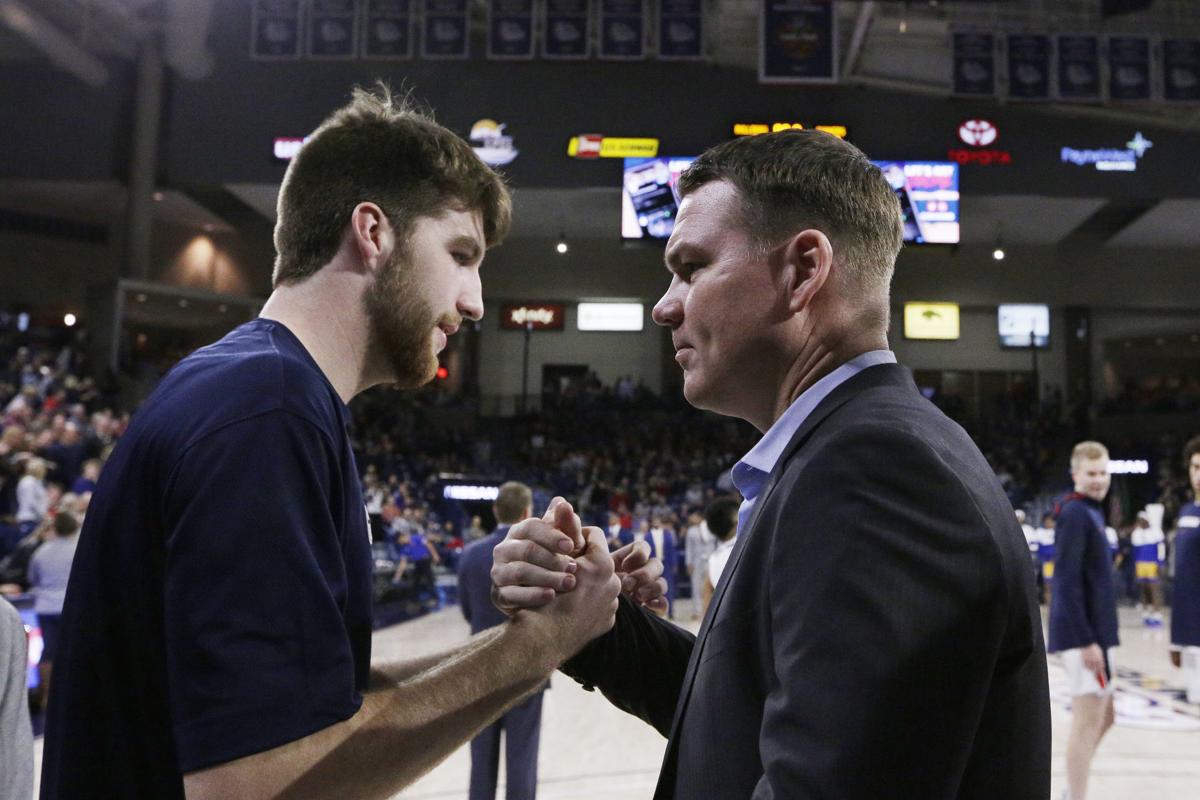 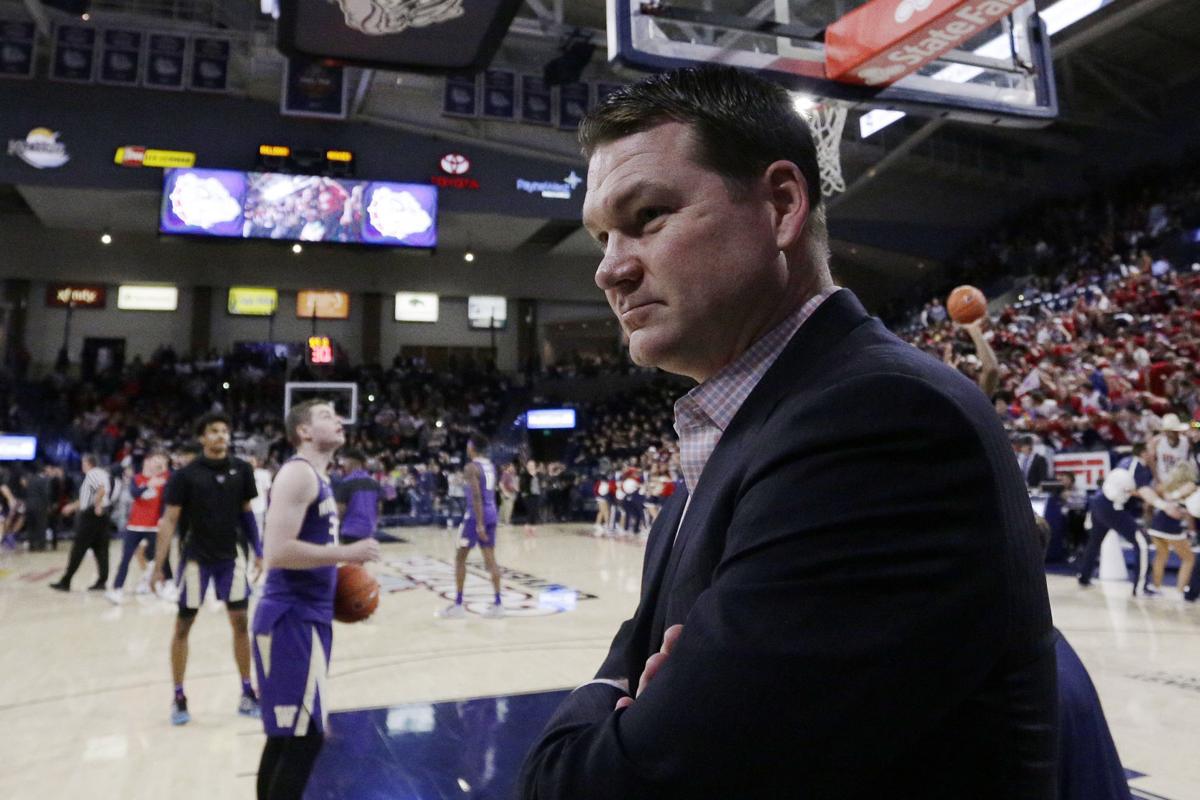 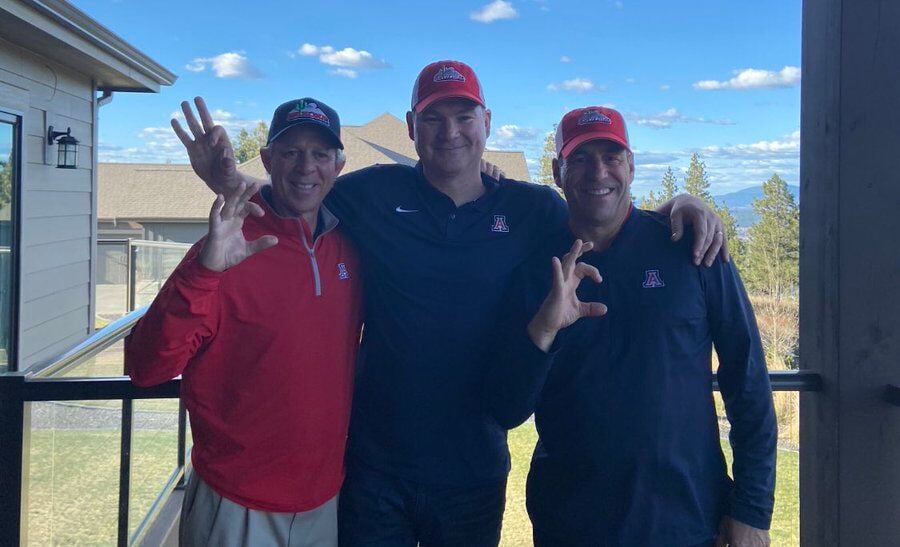