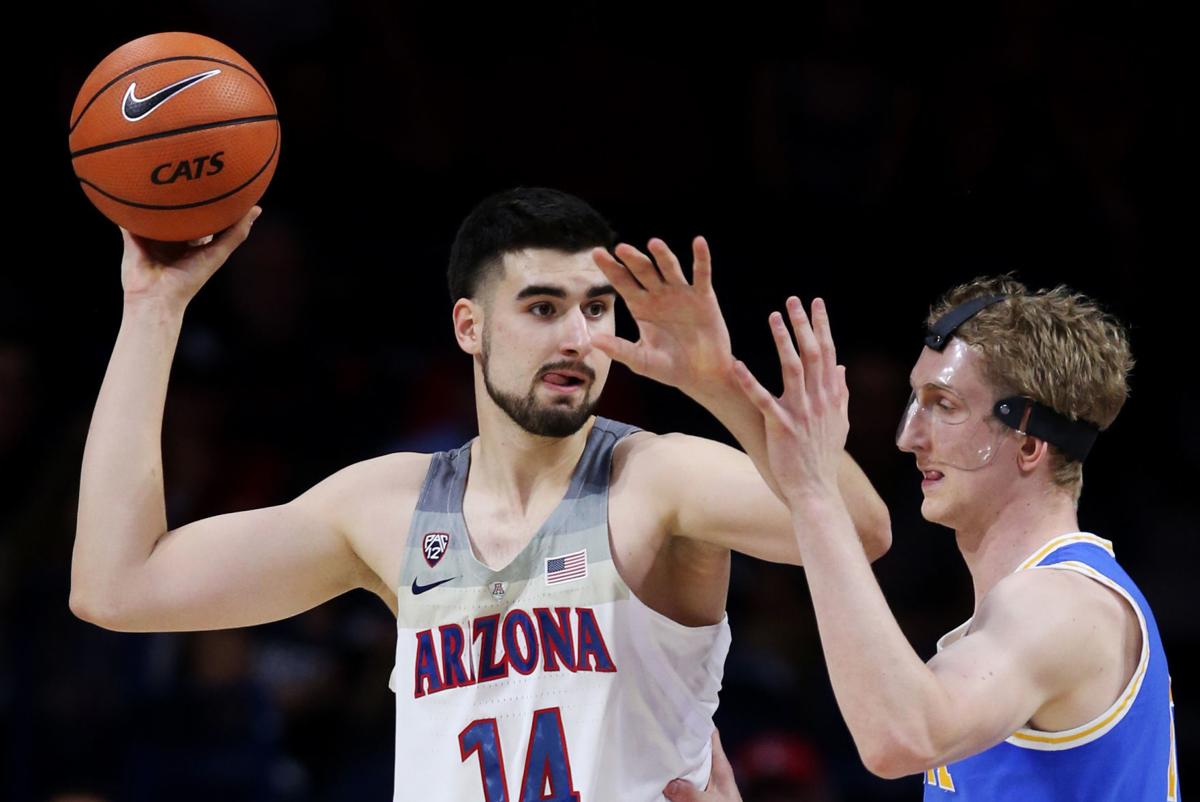 Arizona Wildcats center Dusan Ristic (14) looks to pass around UCLA Bruins center Thomas Welsh (40) during the first half of the No. 13 University of Arizona Wildcats vs. UCLA Bruins men’s college basketball game on McKale Center Feb. 8, 2018, in Tucson, Ariz. 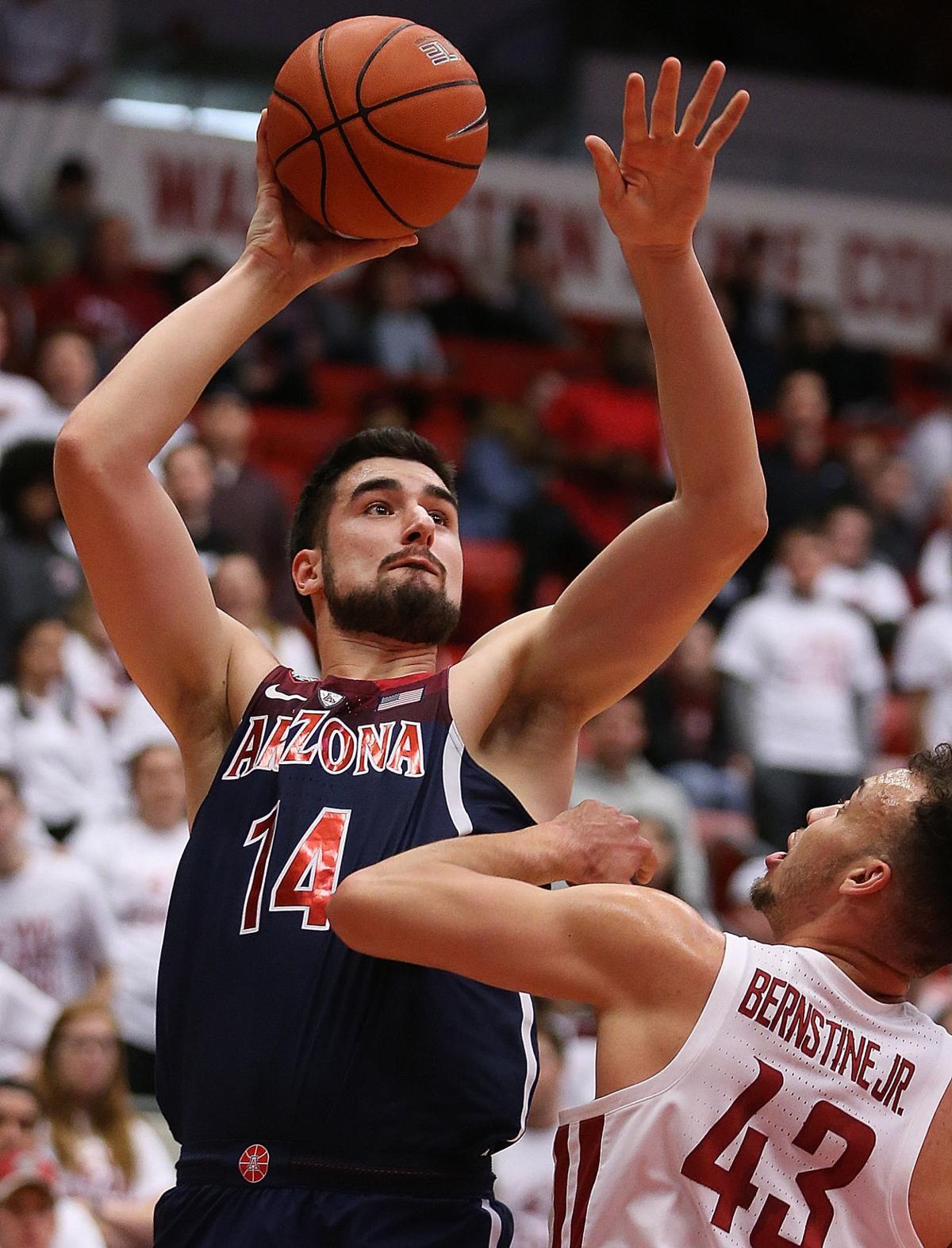 If Arizona beats Oregon State and Oregon this week, senior Dusan Ristic will have a program-record 111 career victories. He’s averaging 11.9 points and 7.1 rebounds per game.

He’s in the gym. The weight room. The sand pits. The classroom.

And the gym, again.

On Sunday, that all changed for a moment. Some presumably surprised Arizona Wildcats fans now have photographic proof on their phones, too.

The ones who happened to notice a 7-footer strolling through Sabino Canyon, that is.

“My parents from Serbia are here, so I spent some time with them and we went hiking,” Ristic said Monday. “It was fun. … They’ve never been there before, so I wanted to show them the natural beauty of Tucson. And it was a long trip for them so it was good for their legs as well.”

While hanging out with his father Dragan (who is “just” 6-4) and mom Biljana (5-7), Ristic also said he received a “lot of love” from fans who recognized him.

He returned the love by posing with them.

“I took a few selfies,” he said, smiling.

Then Ristic went back to work. That’s how he says he’s become one of the Pac-12’s most improved players as a senior, posting double-figure scoring totals in 13 of his last 14 games and averaging 13.6 points on 69.8-percent shooting over his last 10.

“That’s only a result of my hard work, nothing else,” Ristic said. “It’s really nice to see that.”

By extension, Ristic’s improved production has also helped put him in position to be the winningest player in UA basketball history as early as this weekend if Arizona is able to beat both Oregon State on Thursday and Oregon on Saturday.

While the stat isn’t an official part of the UA record book, coach Sean Miller initiated the tally earlier in his tenure as a measure of contributors to highly successful UA teams.

Guard Parker Jackson-Cartwright is five games behind Ristic, since he missed four games as a freshman in 2014-15 with a concussion and six games last season with a sprained ankle. That means PJC also could reach the 110-win mark in the Pac-12 or NCAA tournaments, depending on how the Wildcats do.

“It shows how both of us have honored the process and both of us gave a lot to this program, and improved,” Ristic said. “Again, that’s only a factor of our hard work.”

But Ristic said he didn’t want to make too much of the milestone at this point, and neither did Miller.

That’s because there’s that matter of traveling to Oregon, where the Beavers tend to play much better at home, and where the Ducks smacked the Wildcats 85-58 a year ago by hitting 16 3-pointers, including 10 of their first 13 beyond the arc.

“It really felt funny,” Ristic said. “We all felt powerless at one point. But hopefully this year, we’ll change that.”

Of course, the Ducks no longer have guys such as Tyler Dorsey, Dillon Brooks, Jordan Bell or Chris Boucher around anymore, their roster having rolled over considerably since their Final Four appearance last season.

That could make Saturday’s game a bit different. The new-look Ducks are hitting just 32.6 percent of their 3-pointers in league play this season, including an 8-for-27 effort (29.6 percent) at McKale Center during UA’s 90-83 win on Jan. 13.

“There’s a lot of new faces on both teams,” Miller said. “I’ve been in a lot of games at this point and that’s one that’s not easy to forget.

“It was like a video game. I don’t think I’ve ever seen that many 3-point shots go in.”

Because of that uneasiness heading into the weekend, Miller noted that “whenever it comes,” it will be good to see Ristic become the all-time winningest Wildcat. A UA loss this weekend would mean Ristic would have a chance to do it at home next week against Stanford or Cal, when the Wildcats could also clinch the Pac-12 title.

“Obviously, it would be nice, it would be fitting, that somebody who’s spent as much time away from home, that’s worked as hard as he has and could be considered one of the most improved players in our programs’ history” would get it, Miller said.

“He would probably be right there as somebody ... that (you’d say)‘Man, did they get better from the time they walked into Arizona to the time they left.’”

• Miller said Monday he’s OK with Rawle Alkins’ desire not to take extra rest anymore, as long as he doesn’t have any more soreness in his foot. Miller had said the team would sit him out occasionally in practice after Alkins experienced renewed soreness in his previously broken right foot and missed three games last month.

“It’s all about his pain,” Miller said. “Right now he has zero pain and with zero pain he’s able to do whatever. ... He could be with us in everything we do all the way until the end and, knock on wood, I think that’s where he’s headed right now.”

• Miller said he had no reaction to news last week that the federal investigation could wind up extremely broad in scope. A Yahoo! Sports story quoted sources saying up to 50 basketball programs could be compromised. “My focus is on our team,” Miller said.

Arizona basketball players who have appeared in the most Wildcat wins in their careers:

Greg Hansen: Sam Merriman knew NFL was just a detour from his true love of rodeo

“It was probably inevitable that I came back to this, back to the rodeo,’’ he says.

Arizona basketball: On Dusan Ristic's wins, team meetings and that nightmare in Eugene

Sean Miller said Oregon's 3-point shooting in a 27-point win over UA last season was "like a video game."

'Give him the ball and let him play': UA commit Brandon Williams healthy and thriving

Injury cost scoring point guard most of his junior season.

Deandre Ayton says he and Allonzo Trier are "the best in college basketball."

Greg Hansen: Beavers long ago fell from Pac-12 perch; is Arizona next?

Uncertainty clouds Arizona's future as the Wildcats head to Oregon for the Beavers and Ducks.

On treacherous trip for Sean Miller, here's why the Oregon schools might spoil Arizona's visit

Sean Miller's Wildcats aren't known for being road warriors, and the head coach often stresses how difficult it is to win on the road in the P…

Dusan Ristic and Deandre Ayton are both chasing their own history, but the Wildcats are after much more this week as they set their sights on …

Arizona Wildcats center Dusan Ristic (14) looks to pass around UCLA Bruins center Thomas Welsh (40) during the first half of the No. 13 University of Arizona Wildcats vs. UCLA Bruins men’s college basketball game on McKale Center Feb. 8, 2018, in Tucson, Ariz.

If Arizona beats Oregon State and Oregon this week, senior Dusan Ristic will have a program-record 111 career victories. He’s averaging 11.9 points and 7.1 rebounds per game.