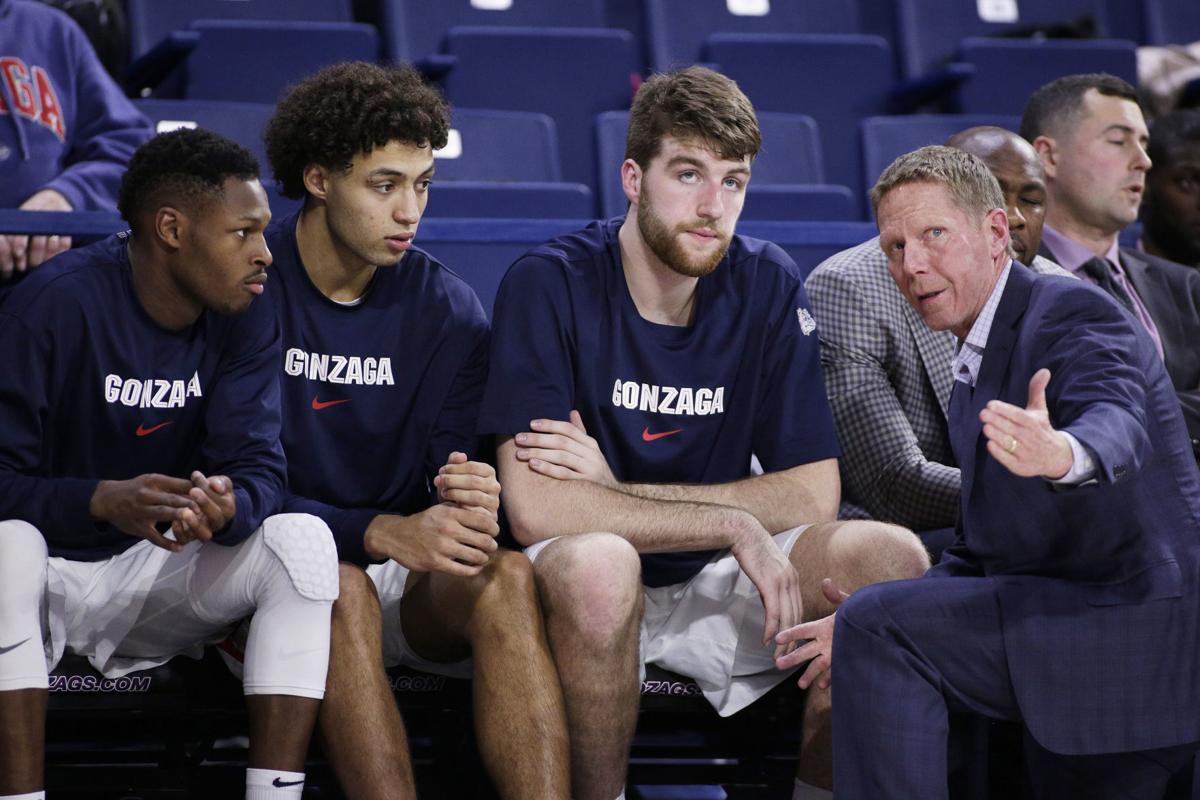 Joel Ayayi, left, Anton Watson, second from left, and Drew Timme are part of coach Mark Few’s retooled roster. Like Arizona’s Sean Miller, Few has only one starter back from the Zags’ 2018 early-season matchup against the UA. 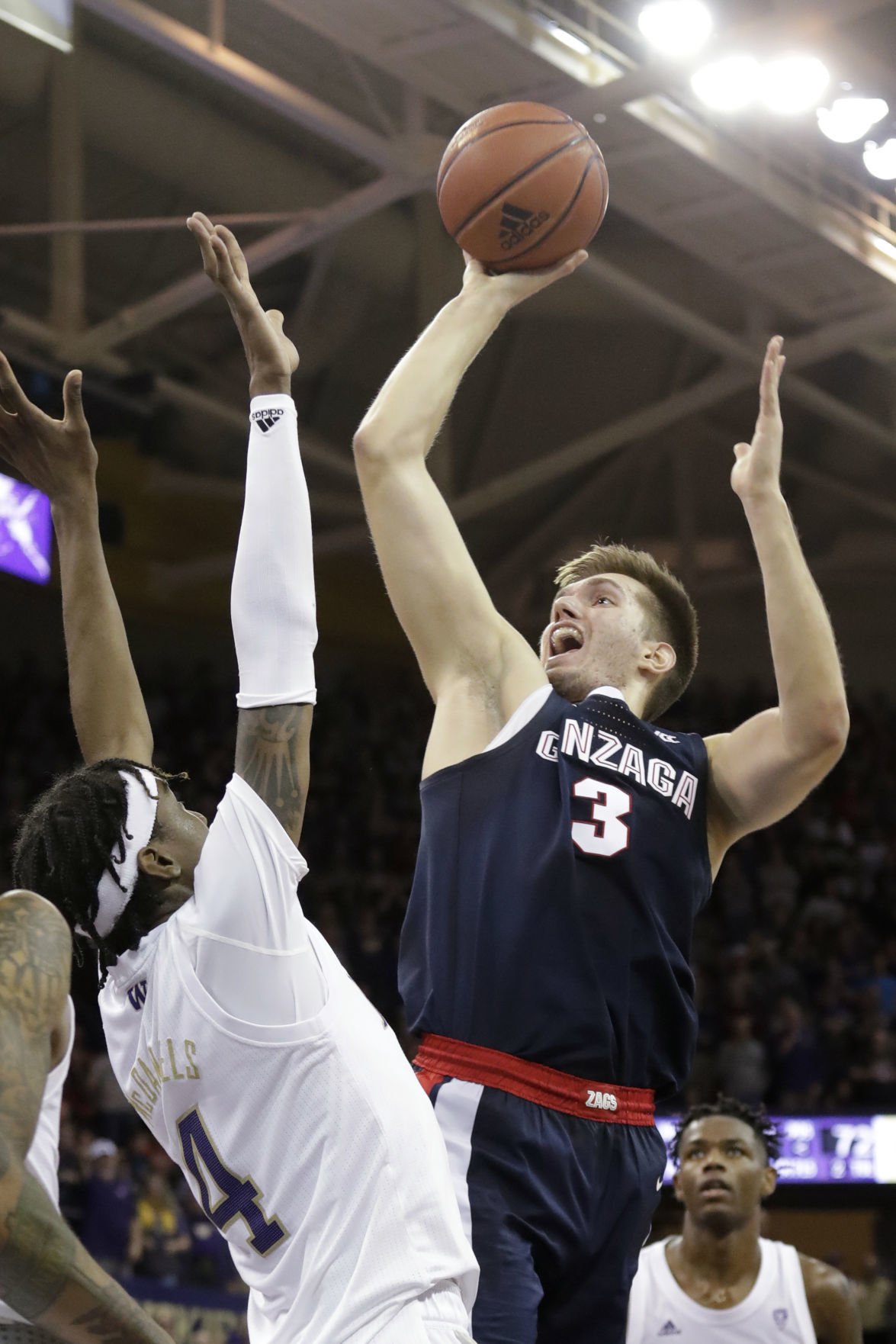 When he wasn’t pondering a Seattle-to-Spokane bike ride, Washington’s world-class ferry system or the inventor of the intermittent windshield wiper during the Gonzaga-Washington game last Sunday, ESPN analyst Bill Walton offered this:

“Gonzaga has the best program in the West,” Walton said.

Yes, even the UCLA legend who regularly refers to the Pac-12 as the “Conference of Champions” won’t deny recent history.

Not only have the Zags made 21 straight NCAA Tournament trips, and won or shared 18 West Coast Conference titles over coach Mark Few’s 20 previous seasons, but they’ve also dominated the Pac-12.

So far this season, even after losing four starters, Gonzaga has already beaten likely Pac-12 contenders Oregon and Washington. The Zags edged the Ducks 73-72 in overtime in the Bahamas and beat the Huskies 83-76 before a rowdy crowd in Seattle on Sunday.

They keep getting it done, over and over.

It’s sustainability at an elite level.

“Gonzaga is one of the premier programs in college basketball ... a team and a program that has stood the test of time,” Arizona coach Sean Miller said. It’s a program “that produces a Final Four contender, no longer in a given year, but I think almost any every year.”

Maybe even this year.

The Zags lost big men Rui Hachimura and Brandon Clarke to the first round of the NBA draft last June, but has moved Serbian big man Filip Petrusev to a go-to role inside, while getting Killian Tillie back from injuries and working in former UA recruiting target Drew Tillie around them.

Similarly, on the perimeter, French sophomore Joel Ayayi has taken advantage of greater opportunities to hit 39.1% of his 3s and other all-around shooting.

The Bulldogs have holes — they aren’t exceptionally deep and aren’t great perimeter defenders — but they can score from all levels and, when they do miss, they hit the offensive glass hard.

“They may not have the NBA first-round picks they have had in the past,” said UA associate head coach Jack Murphy, who scouted the Bulldogs. “But they’re very talented and obviously really well-coached.”

Not that you’ll hear much about that from Few, who has continued to keep a relatively low profile despite his program’s stature, enjoying life in the Inland Northwest.

Few is known to take advantage of the considerable outdoor opportunities around Spokane and told Blue Ribbon Yearbook that he went bicycling with Walton and his wife, Lori, during a “highly entertaining 12-hour stream of consciousness” last June.

It was probably a much-needed break. When Few returned this fall, he found himself dealing with the sort of heavy roster transition that Arizona also is experiencing this season.

After all, each team playing Saturday has only one starter back from their matchup in the 2018 Maui Invitational — Arizona’s Chase Jeter and Gonzaga’s Corey Kispert.

A request to interview Few this week was unsuccessful, but when Blue Ribbon asked before the season if he enjoyed the rewards of rebuilding maybe more than coaching teams that are already loaded and experienced, he chuckled.

“Well, I don’t know, those years are pretty fun,” Few said. “It’s like saying, ‘Do you get bored when you get blackjack every time when the dealer throws you 21?’ Not really.

“No, listen, it’s challenging. We’re having to really, really go back to the basics of why we do things up here, which we do every year. But now we’re really, really having to teach them in-depth, because we have such little experience. So it reinforces kind of why you do things. “

For both Arizona and Gonzaga, Saturday’s matchup represents the next phase in that process. After six home games and the midlevel Wooden Legacy event, the Wildcats are testing themselves with games against Baylor, Gonzaga and St. John’s this month.

The Zags have it even tougher: They’re playing Arizona in between their win at Washington and before hosting North Carolina next Wednesday.

“It is an opportunity, but it’s also daunting,” Few said on his radio show this week. Arizona is a “really, really, uber, uber talented team. I’m not big on the draft and all that but both (Washington and Arizona) have some guys who look the part. And more importantly not only do they look the part, but they’re getting it done in college.

“But it’s why you come to Gonzaga, to play in games like this. Hopefully we’ll play with the poise we played with at Washington.”

Their history suggests they will.

Who's got the edge when the Arizona Wildcats face Gonzaga?

Arizona Wildcats debut at No. 15 in first NET ratings of season

Forward may return for Saturday's game in San Francisco against St. John's.

Joel Ayayi, left, Anton Watson, second from left, and Drew Timme are part of coach Mark Few’s retooled roster. Like Arizona’s Sean Miller, Few has only one starter back from the Zags’ 2018 early-season matchup against the UA.