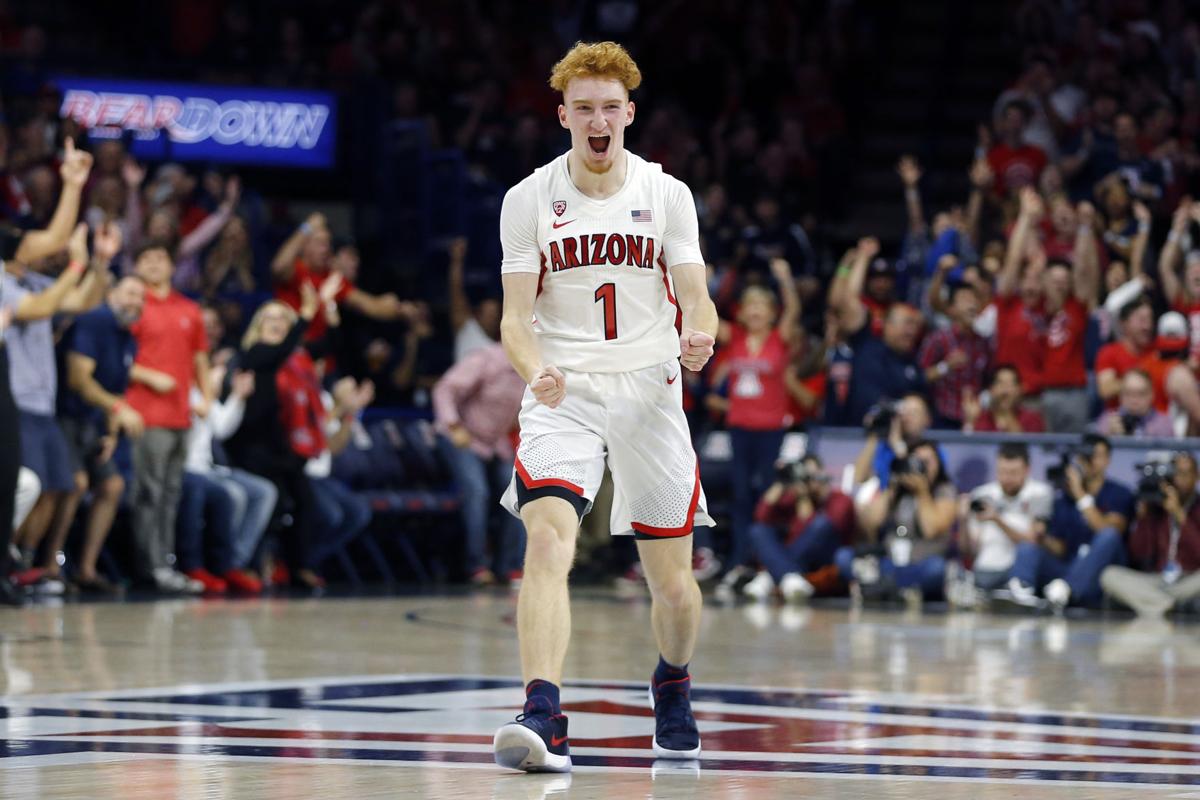 Arizona guard Nico Mannion reacts after making a defensive stop against Illinois during the first half of an NCAA college basketball game Sunday, Nov. 10, 2019, in Tucson, Ariz. (AP Photo/Rick Scuteri) 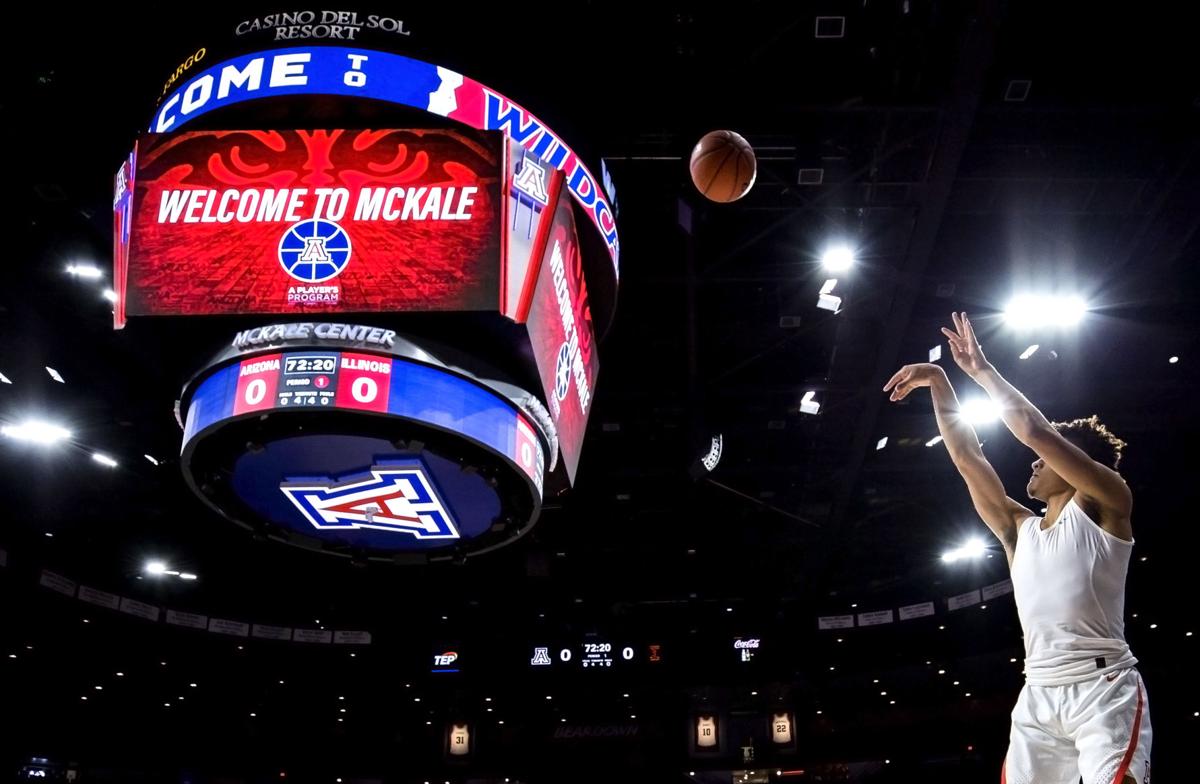 Two games into the Arizona Wildcats’ regular season, and this much is already clear: The hype is real.

By rising up to lead Arizona to a 90-69 win over Illinois at McKale Center on Sunday, Nico Mannion and Josh Green did the exact sort of thing they were expected to do when they arrived as the most heralded pieces in Arizona’s much-needed 2019 recruiting haul.

Up and down somewhat during the preseason, as freshmen often can be, Mannion and Green instead behaved Sunday more like the first-round NBA Draft picks they have been projected as: Mannion put on a dazzling offensive show as the Wildcats’ point guard, collecting 23 points on 9-for-15 shooting with eight assists, while Green hit 4 of 7 3-pointers en route to 20 points.

Of course, all that is not to forget another freshman who let us all know in the season opener that he probably shouldn't be forgotten: Zeke Nnaji added 19 points and five rebounds after going off for 20 in just 21 minutes of UA’s opening win over NAU.

That’s a total of 62 points against a power conference team from three freshmen playing their second college game.

That kind of show was good for the Wildcats, of course, but also for the UA freshmen on a personal note: In what is likely to be or at least approach a season-high Arizona issued 33 credentials to NBA scouts (from 24 teams) for Sunday's game In addition to Nnaji, Mannion and Green, NBA scouts have been looking at Illinois guard Ayo Dosumno and center Kofi Cockburn.

While Dosunmo had 15 points and four assists, scoring most often with fast-break drives to the basket, the Wildcats mostly held the massive Cockburn in check. The big man from Jamaica had nine points and seven rebounds after crushing Grand Canyon for 23 and 14 on Friday in Phoenix.

“He's a guy that because of his uniqueness we have expectations for,” Illinois coach Brad Underwood said Saturday, as his Illini prepared for Sundays’ game. “The scary thing is his upside -- he hasn't he touched it. He's still learning how to play and do certain things, in terms of this growth and understanding of the game.”

Mannion, Green and Nnaji displayed their upside as top recruits a year ago and again on Sunday, when they elevated their games as the situation demanded.

Sean Miller says Arizona’s freshman class could be the best he’s recruited to the UA. pic.twitter.com/p7b4Wh9eHK

On the last sequence of that run, Mannion was the engine. Chase Jeter blocked a short jumper from Frazier, then Mannion initiated the offenses and bounced a behind-the-back pass to Max Hazzard on the left wing. When Hazzard couldn’t find a shot, he dribbled back toward the top of the key and passed back to Mannion, who then hit Green on the left perimeter for an open 3 that Green sank.

By the time there were eight minutes left in the game, Mannion already had 16 points and six assists while Green had 18 and Nnaji had 13 points and six rebounds.

Up just 39-38 at halftime after Max Hazzard hit a 3-pointer with two seconds left in the first half, Arizona jumped on the Illini defensively early in the second half. UA went on a 10-3 run, with Nnaji scoring twice, while keeping Illinois to 1-5 shooting.

Illinois scored seven straight points to pull within 51-50 but Mannion scored and later assisted Green on his fourth 3-pointer of the game to put UA ahead 56-52 entering the media timeout with 11:57 left.

In the first half, Mannion had 11 points and three assists, while Green had 10 points while hitting 2 of 5 3s. The Wildcats shot 53.3 percent from the field, and scored 11 points on 11 Illinois turnovers but were outrebounded 16-11.

Illinois shot 55.6 percent from the field before halftime. Trent Frazier led all scorers in the half with 12 points while hitting all three 3-pointers he took.

After Illinois jumped to a quick 13-6 lead, Arizona came back and held the lead over the middle of the first half before the Illini pulled ahead again with a 6-0 run entering the final two minutes, the last two scores coming from layups by Illinois point guard Ayo Dosunmo.

But with Illinois later taking a 38-36 lead, Jemarl Baker found Hazzard just in time for the 3-pointer to give Arizona momentum at halftime.

Known for pushing the ball and getting to the basket more than 3-point shooting, Illinois nevertheless opened the game by firing in three 3-pointers to take a quick 9-2 lead. Stretch-four Giorgi Bezhanishvili hit the first one from the left corner while Trent Frazier hit two from the right perimeter.

Illinois moved its lead to 13-6 with a step-back jumper from Frazier eight feet out while Feliz scored again near the basket, though Mannion kept the Wildcats alive early. Mannion scored three of UA’s first four baskets, the last an offensive rebounds of Dylan Smith’s missed 3-pointers.

The Wildcats were playing again without Arizona sophomore guard Devonaire Doutrive while his indefinite suspension continues.

Doutrive was suspended before the Wildcats' exhibition game with Chico State for unspecified reasons and will have now also missed two regular-season games. However, he is still practicing with the Wildcats and it is possible he might be reinstated in time for Arizona’s game Thursday against San Jose State.

Without Doutrive, a potential starter at shooting guard based on his strong preseason practice efforts, the Wildcats have started senior Dylan Smith and used grad transfer Max Hazzard off the bench, while combo guard Jemarl Baker has played both guard spots.

Check out more photos from the game here:

Arizona guard Nico Mannion reacts after making a defensive stop against Illinois during the first half of an NCAA college basketball game Sunday, Nov. 10, 2019, in Tucson, Ariz. (AP Photo/Rick Scuteri)