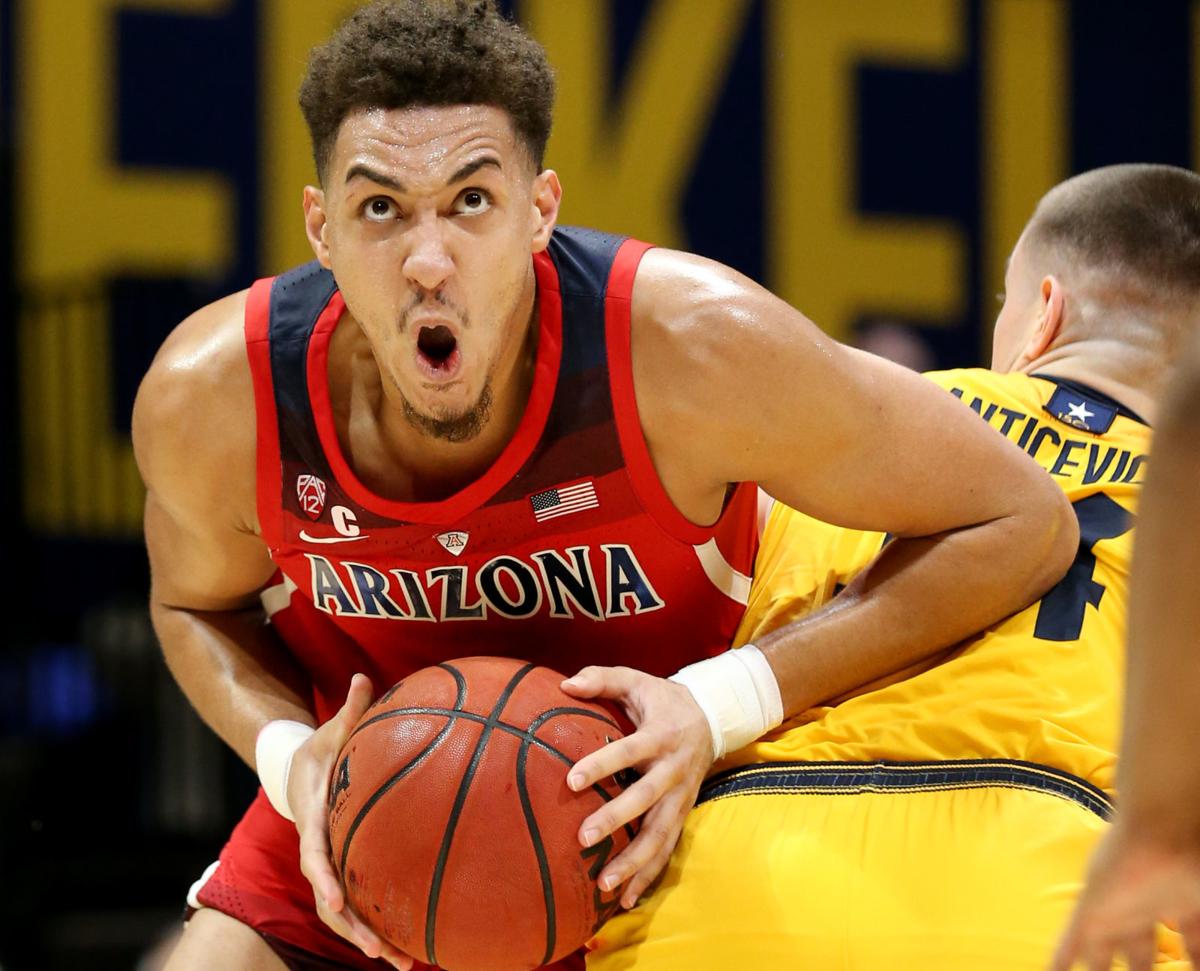 Chase Jeter thought long and hard before deciding to postpone a pro career in order to come back to the Wildcats. 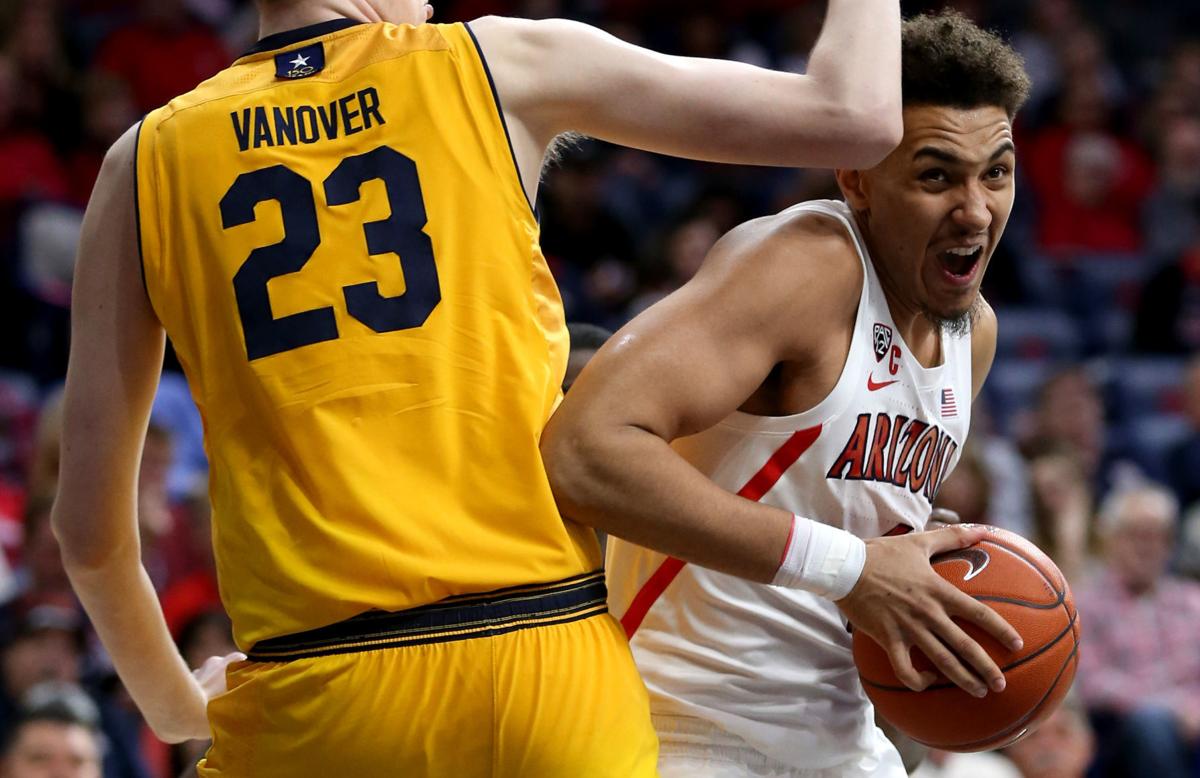 Arizona Wildcats center Chase Jeter (4) elbows his way by California center Connor Vanover (23) and into the lane in the second half of their Pac-12 game at McKale Center, Thursday, February 21, 2019, Tucson, Ariz.

Thanks to the fluidity of modern-day college basketball, in which top players tend to move for one reason or another long before their eligibility is up, Arizona’s 2019-20 roster is a barbell.

The Wildcats have four highly regarded freshmen, all of whom have notable NBA potential … and four fifth-year seniors, all transfers who are now facing their last chance at polishing their resumes before hitting the job market next spring.

Combine them with hard-driving junior Ira Lee and instinctive sophomore Devonaire Doutrive, that’s a melting pot full of potential chemistry issues. There’s only one ball and 10 eligible guys who could all be clamoring for it.

But senior center Chase Jeter says he doesn’t see it that way. For two reasons.

One, Jeter says the new guys have “no egos at all,” and have mixed in well so far while practicing and hanging out together since early July.

For another: He says he wants to help.

The co-captain of the Wildcats last season along with point guard Justin Coleman, who is now a UA graduate assistant, Jeter says he’s hoping to share the lessons from his experiences on and off the floor over the previous four years.

Jeter entered college basketball as a five-star rocket out of Las Vegas headed to Duke. He played a secondary role and suffered a back injury over his two seasons there. He then transferred to Arizona, practiced against Deandre Ayton while sitting out 2017-18 and played a big role on a shorthanded team last season.

That’s a little bit of everything, basically.

“I think that I can help the young guys a lot, especially the young bigs,” Jeter said. “Kind of show them the ropes, how to handle themselves on the court, off the court, with the media, dealing with things, dealing with injuries, anything.

“I mean, I’ve been in school for five years now and last year was really my first year in the role I had, where I took on that many minutes. I’ve got a lot of experience, and I’ve got a lot of knowledge that I want to pass down to the young guys.”

UA coach Sean Miller said Jeter’s 2018-19 was especially valuable. Even though the Wildcats struggled to a 17-15 record, Jeter logged 24.8 minutes per game while starting 26 of 30 games — missing two games only after he tweaked his back in a hard fall against Oregon State.

“Last year was really his first full year of playing college basketball, especially in a big role,” Miller said. “Now that he has that experience under his belt — I think he’s healthy and has had a good summer — I think that he can make a jump, whether it’s being bigger, stronger, healthier or just better equipped to see all the different things that accompany a long season.

“Having him at 22 years old, and with all that he’s been through and who he is in the locker room, is a really healthy thing for our team.”

For a while last spring, it wasn’t clear if the Wildcats would have Jeter’s experience around to draw from. A three-time all-conference academic pick — twice in the ACC and last season in the Pac-12 — Jeter graduated last December with a degree in human social and behavioral understanding.

That meant he could have grad-transferred to another school, or jumped into professional basketball.

The decision weighed heavily on him. Jeter said he spoke to both his mother and his father, a former UNLV player in the Jerry Tarkanian era, and made a decision before returning home to Las Vegas in May.

He instead decided to pursue a master’s in educational leadership and play a final season for the Wildcats.

“I went back and forth a lot, but my main thing was to go to the NBA, something that I’ve always wanted my whole life,” Jeter said. “I felt more stressed out about it than I should have been. So that kind of answered the question for me. I just decided that it was going to be best for my peace of mind to come back and get my grad degree and finish strong my last year at Arizona.”

Jeter said he never thought about playing at a third college as a grad transfer.

“It was more about, ‘Do I want to stay or do I want to go professional?’” Jeter said. “After the year we had, and with my injuries that I dealt with toward the second half of the season, I felt like it was in my best interest not only to come back, but I wanted to leave on a better note. I wanted to be part of something a little bit better than what I would have left behind if I would have left.

“This year, the table is set for a better season.”

One reason for that, of course, is that Miller did pull in those four freshmen — with point guard Nico Mannion and wing Josh Green expected to make the biggest impact. They’re both projected first-round NBA draft picks next summer but, the way Jeter describes it, don’t carry themselves with the typical entitlement that accompanies that status.

“Both of them have a great head on their shoulders, and they’re great guys to be around,” Jeter says. “They love the game. And when you have that type of attitude in the locker room, it rubs off on everybody.”

Jeter says both are still adjusting to the Wildcats’ system, and will have to adjust to the speed of the college game. But he said Mannion has UC Irvine grad transfer Max Hazzard and other veterans to help him adjust, while Jeter says Green showed an impressive work ethic in dealing with rehabilitating his injured shoulder over the summer.

“A guy who’s injured, that (rehab) can go south more often than not, especially in college,” Jeter said. “But Josh, he stayed on top of his rehab and took care of himself and continued to develop at that. He was always in the gym, getting shots up and working on his game.”

Miller has said Nnaji is as physically talented as anybody he’s recruited at Arizona and that Koloko, considered a longer-term project, will play in the NBA someday.

Jeter says he likes what he sees, too.

“Christian’s doing really well. He’s put on a lot of weight since he got here,” Jeter said. “Zeke as well, but he came in here with a really good physique. They’re going through their learning curve, but we all expect both of them to have a great contributing role on this team in more ways than one.

“Christian is long and active, can block shots. Zeke’s a strong finisher around the basket, can step out with the mid-range shot. He’s also very aggressive offensive rebounder.”

Gettings, meanwhile, further proved himself as an athlete Friday, setting a Miller-era team record in the Wildcats’ annual preseason mile run with a time of 5:14 — despite being 6-foot-9 and 240 pounds. Gettings broke the mile record of 5:17 set by guards T.J. McConnell and Parker Jackson-Cartwright.

Off the court, Jeter says the new and returning Wildcats also have used the summer to bond off the court. Most of them live near each other near campus, and will frequently meet for video games of Madden and NBA2K or, lately, some dominoes.

Before long, the Wildcats could have a little more fun during basketball games, too. If so, maybe that will be thanks to their unusual mix of talent and experience, not despite it.

“We have a great balance of guys,” Jeter said. “This is a high character team. If you would take a look at our team around this time last year versus what we’re looking like this year, I would say we’re in a much better position, chemistrywise and in terms of having a better season coming up.”

Arizona's coach is encouraged, even though the Wildcats are likely to have only 10 scholarship players available.

Murphy will make $335,000 over the next two seasons, according to a notice of appointment obtained by the Star.

The Cats set a school record with 51 first-half points and rout the Lumberjacks 65-41 in the home opener.

Lindy's says the FBI "produced a one-season flu of sorts" at Arizona.

Book Richardson was recorded saying he paid $40,000 to have Rawle Alkins' transcript altered.

All but one of UA's Pac-12 weekends are traditional Thursday-Saturday pairings.

Mr. Football on a UA-TTU shootout, what constitutes a 15-yard penalty and why Cats will win for 'Comet'

Star columnist Greg Hansen on what to expect Saturday night at Arizona Stadium.

Chase Jeter thought long and hard before deciding to postpone a pro career in order to come back to the Wildcats.

Arizona Wildcats center Chase Jeter (4) elbows his way by California center Connor Vanover (23) and into the lane in the second half of their Pac-12 game at McKale Center, Thursday, February 21, 2019, Tucson, Ariz.