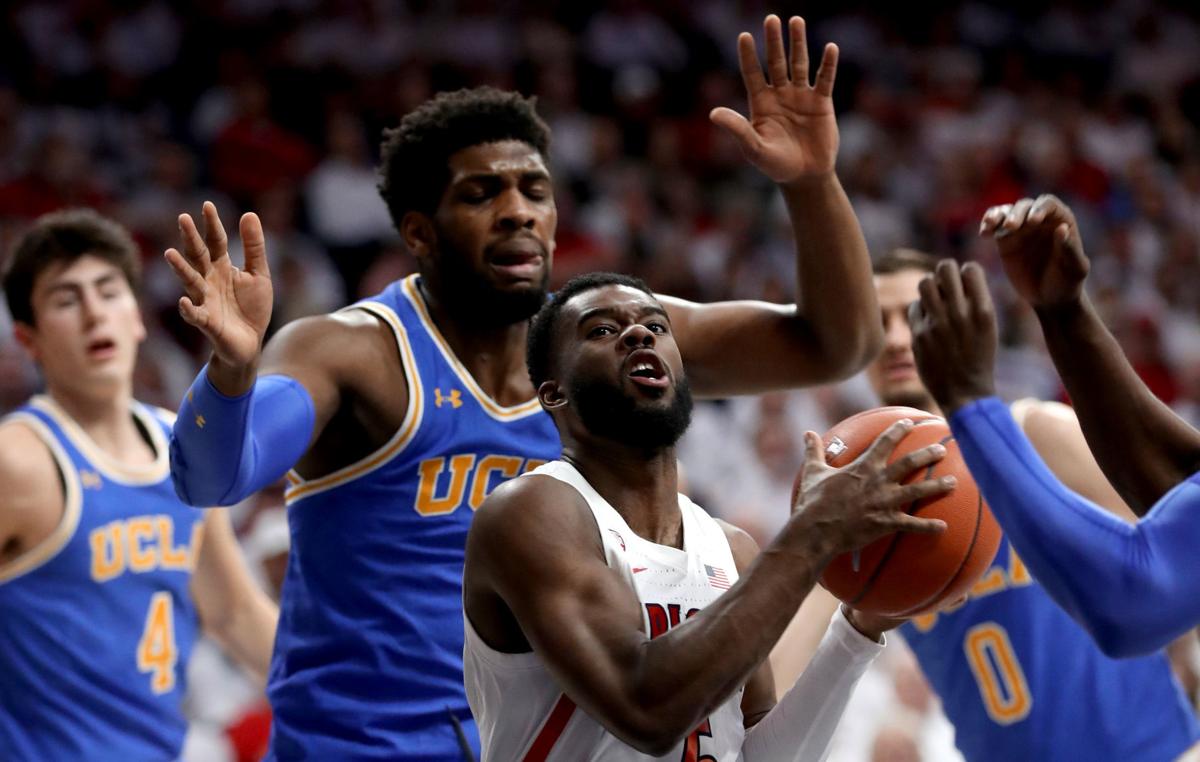 Arizona’s Max Hazzard goes into the lane alone in the first half Saturday. The Wildcats shot just 25.4% in their ugly loss to UCLA. 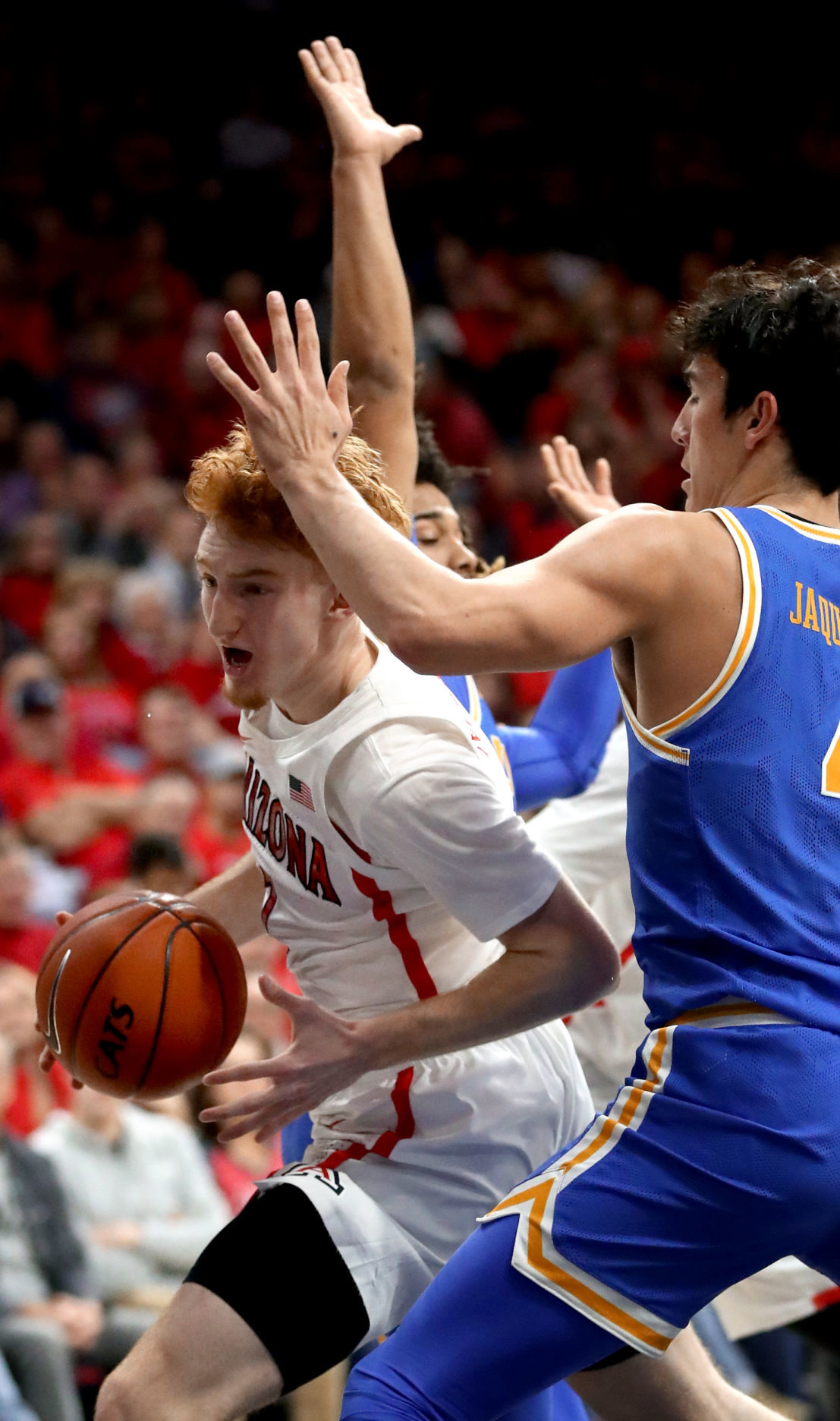 Arizona guard Nico Mannion, left, hit only 2 of his 14 shots in the UA’s 65-52 loss to UCLA on Saturday night.

By their coach’s account, the Arizona Wildcats had a pretty good day Friday.

Coming off a near-collapse against USC on Thursday but still managing to win 85-80, the No. 23-ranked Wildcats went about trying to fix things before facing a resurgent UCLA team that wound up beating them 65-52 on Saturday.

“We really worked hard on the heels of our USC game to make sure we were locked in and prepared,” Miller said. “But there’s no magic potion and I don’t want to point towards our preparation as the reason we lost.”

So maybe it didn’t seem that way at the time, at least to those behind the closed doors of UA practices and meetings, but the public fact of the matter is this: The Wildcats had already started what became the worst 50-minute stretch of shooting in the Miller era, and maybe their entire history.

Over their last 50 minutes, including a 1 for 9 finish against USC and a 15 for 59 effort on Saturday against UCLA, the Wildcats are shooting just 23.5% from the field.

Here’s how it happened:

1. They lost their Washington mojo.

The Wildcats pulled out the first road sweep of the wild Pac-12 race so far during the previous weekend, beating Washington 75-70 and Washington State 66-49, and jumped back into the AP Top 25 poll at No. 23.

The Wildcats were tied in the loss column with four other teams for first place and, with six of their 10 remaining games at home, appeared to be in good position to make a run at the Pac-12 title.

But after they returned home, something didn’t seem right to Miller. Maybe they celebrated too much on that cushy charter flight home, or maybe they just took too long to exhale afterward, but their edge was suddenly missing.

“You can always tell when a group is locked in and I thought on our last road trip (we had) the focus,” Miller said Thursday after the USC game. “I don’t know if I felt better about this year’s team on that trip, but tonight we obviously reverted. We had a hard time practicing leading up to the game. I didn’t think we had a great shoot-around (before the game).”

2. They almost melted down (again).

The Wildcats actually reverted almost to where they had been 12 days earlier, kicking away a 22-point lead in a 66-65 loss at ASU on Jan. 25.

Against USC, Arizona twice led by 20 points in the second half and watched USC cut it all the way down to three in the final seconds. The Wildcats missed their final six field goals, failing to score except at the free-throw line after Stone Gettings hit a midrange jumper with 8:20 to go.

They also missed 5 of 12 free throws over the last two minutes, giving even more life to the Trojans until Nico Mannion finally hit both free throws he took with three seconds left to make it a two-possession victory margin.

“We have a group that has a lot to learn,” Miller said. “We’re very fortunate to win tonight.”

Some coaches consider learning lessons and still winning the best kind of lessons. Not Miller.

“No,” Miller said. “I think if we would have lost, it probably would have allowed them to learn more.

3. They had a false sense of security early against UCLA.

The Wildcats did lose on Saturday, but only after a first half that gave them some reason to be optimistic. Arizona continued to break down defensively and only made 3 of 19 two-pointers before halftime against UCLA, but trailed only 29-28 at halftime because they hit 6 of 11 3-pointers while the Bruins also struggled to shoot inside the arc (4 for 14).

“It’s hard to make 3 twos, (just) 3 of 19 from two,” Miller said. “To be down one point at the half I think it gives you a lot of hope. It was kind of a physical rock fight type of game in the first half. The second half was more of the same.”

Except they stopped throwing rocks after halftime. UA quickly fell behind 38-30 while missing four of its first five shots in the second half, and after pulling within 45-44 midway through the half, collapsed thereafter.

“We came out very flat from halftime in the first four minutes,” Miller said. “It’s hard to be gloom and doom when you win, but the last 10 minutes of USC reminded me of a lot of parts of this game, and that’s not to take anything away from UCLA because they did a great job here tonight on both sides.”

4. Small-ball worked. Until it didn’t.

With Arizona down 45-36 early in the second half, Miller substituted Dylan Smith for Gettings, giving the Wildcats four perimeter players with only Zeke Nnaji in the post. UA then cut UCLA’s lead to 45-42 before Gettings went back in for Max Hazzard and the Wildcats later pulled within one after Nnaji hit a pair of free throws.

But the smaller lineup had its issues. Among other things, it made the Wildcats even more vulnerable to UCLA’s favorite tactic – creating mismatches with big and versatile wings Chris Smith and Jaime Jaquez.

That was evident just after Hazzard entered the game with 14:14 left. While a scrum formed under the basket, Smith popped open from about 17 feet in the left corner and Hazzard raced out to guard him — but Smith easily sank the long jumper over a defender who was nine inches shorter.

Hazzard was taken out after he picked up his third foul with 10:11 to go, moving the Wildcats back to a bigger lineup. From there, things only became worse.

But, to Miller, there was no choice.

“We played super small — four guards and Zeke — and that lineup can get us back in the game, it can change the game, it can kind of give us a different scheme,” Miller said. “But at the end of the day, all of us have an identity and I think you would see if we just stayed with that the entirety, it would have caused other problems.

“For example, in rebounding and you saw a couple times when our smaller guys got switched on their big wings. They took advantage of it so it kind of forced our hand to go back.”

5. Leaders were nowhere to be found.

Long one of the most curious features about this Arizona team is that it has four fifth-year seniors — and its top three scorers are freshmen.

And on Saturday, when the freshmen were struggling, there was nowhere else for the Wildcats to turn.

Fifth-year senior Dylan Smith was 0 for 7, missing all four 3-pointers he took, and Miller said he thought Smith had “missed about 20 in a row.” (He wasn’t that far off — Smith actually has missed 17 straight 3-pointers since hitting the first one he took on Jan. 30 at Washington).

Another fifth-year senior, Gettings, had only two points and one rebound in the second half while the Bruins went at him hard. Third-year sophomore Jemarl Baker went scoreless after halftime. Junior Ira Lee took just one shot the entire game. Hazzard was scoreless. And fifth-year senior Chase Jeter, once UA’s starting center, didn’t play at all again.

“Unfortunately, we didn’t play as aggressive as we needed to play tonight,” Gettings said.

All that made poor shooting nights from freshmen Nnaji (2-8), Josh Green (3-11) and Mannion (2-14) even harder for the Wildcats to digest.

“Our three most of everything — most minutes played, most points — are freshman guys,” Miller said. “Thank goodness we have them. They’ve done a great job.

“But when you’re riding their production every day and every game, there’s going to be some ups and downs. And we have some other guys who are really struggling.”

Arizona shooting efforts below 35% in the Sean Miller era

Arizona has shot worse than 35 percent from the field only 13 times in the Sean Miller era, and four of those efforts came against UCLA.

Iguodala was traded from Grizzlies to Heat last week.

The Wildcats have tumbled out of the poll three times now.

Arizona’s Max Hazzard goes into the lane alone in the first half Saturday. The Wildcats shot just 25.4% in their ugly loss to UCLA.

Arizona guard Nico Mannion, left, hit only 2 of his 14 shots in the UA’s 65-52 loss to UCLA on Saturday night.