Believing another wave of zone defenses would greet his Wildcats this season, Arizona coach Sean Miller often assigned some of his players to form zone schemes for his offenses to practice against this fall.

It was a necessity, even for a man-to-man devotee such as Miller. More and more in recent seasons, Pac-12 teams have thrown zones at the Wildcats: Mike Hopkins brought Syracuse’s infamous 2-3 zone to Washington, Oregon State’s Wayne Tinkle has a matchup zone and 1-3-1 in his pocket, while Utah’s Larry Krystkowiak and now UCLA’s Mick Cronin use a mix of zone and man defenses.

Then there’s Oregon’s Dana Altman, who famously shows multiple zone defenses that can morph into something else — sometimes on the same possession. And even USC’s Andy Enfield, also primarily a man-to-man coach, played matchup zone entirely against the UA last season in Los Angeles while the Wildcats shot just 27.8 percent.

But while nothing from Arizona’s 87-39 win over San Jose State on Thursday may count as solid evidence — considering the Spartans’ reputation as one of Division I’s worst teams — there were indications Thursday that the Wildcats might have enough zone-busting weapons to make opposing coaches think twice about their strategy this season.

Not only did the Wildcats shoot 44.4% from 3-point range — they have hit 42.1% over three games overall — but it’s increasingly obvious they also have a nifty new tool.

Every time the Wildcats poked the ball through the zone to their freshman big man Thursday, he took advantage, scoring 26 points, shooting 8 for 8 from the field and taking 12 trips to the free throw line while making 10 free throws.

Nnaji also collected 11 rebounds to become the first UA freshman to record a 20-10 effort in his first three games since Brandon Ashley had 20 points and 10 rebounds against Long Beach State in 2012-13.

He sliced the thing apart, somewhat like a strong, skilled and agile Arizona power forward did so often nine seasons ago en route to becoming the No. 2 pick in the NBA draft.

“Zeke’s a lot like Derrick Williams against the zone — he can really hurt you in the high post,” Miller said after Thursday’s game. “But he doesn’t have to do it just by shooting. He can drive. He’s the ideal player to get the ball anywhere in and around the rim, or anywhere in and around the key area, against the zone. Because when he turns and faces a lot of good things will happen. He had a couple good passes tonight as well.”

When asked what the key was to his offensive efficiency, Nnaji politely spoke along the company line.

“I’d say it’s my teammates,” Nnaji said. “I mean, they’re giving me the ball in great spots. And our coaches have a good offenses for us that’s been working so far.”

OK. But somebody still has to has to put the ball in the bucket, and Nnaji never missed.

“Obviously, Zeke Nnaji was just fantastic,” Miller said. “How many players can go 8 for 8 from the field in any game, 10 for 12 from the foul line? And he had 11 rebounds, six on offense, 26 points and in only 21 minutes. He was clearly dominant.

“He has a knack of getting fouled, and it really showed in tonight’s game. He did a real good job against their zone in the middle. His teammates found him, but he delivered.”

Well, Nnaji did take some credit, at least as part of a team effort to take advantage of the middle of the zone as Thursday’s game went on. Forward Ira Lee said the Wildcats were initially “shooting too many perimeter shots” before making the adjustment to get the ball inside more often.

“I think (SJSU) really pressured the ball well, and because of that they left a lot of space in the middle open,” Nnaji said. Not getting the ball inside was “what our problem was in the beginning but when coach talked to us about that, we definitely changed that and we were able to take advantage of that.”

Still, maybe because he has taken shots over the years for his team’s performance against the zone, Miller issued a flat response when asked what kind of adjustments were needed to attack the Spartans’ zone properly.

“We made no adjustments,” Miller said. “We attacked it properly from the opening tip to the final buzzer.”

While sophomore guard Devonaire Doutrive earned the Wildcats’ gold practice jersey twice last month and appeared to be in position to start at shooting guard before his Nov. 1 suspension, he was placed in the back of the line upon being reinstated Thursday.

After Doutrive scored 12 points and five rebounds, with two assists and no turnovers in just 16 minutes Thursday, Miller said he had made obvious improvement from his freshman year, when he played in just 26 of 32 games.

Still, Miller said it would take “a little bit of time” to work him into a rotation that already has used the same starting lineup in all three games.

The plan Thursday was “just to get him in and allow him to play a role,” Miller said. “There wasn’t any particular minutes (to give him) other than he wasn’t gonna start. You know, we’re pretty set there right now, our starting lineup.”

Miller also said he may give more opportunity to another wing player, Max Hazzard, after the grad transfer from UC Irvine scored six points on 2-for-3 3-point shooting, three assists, a steal and no turnovers. Miller pointed out he also had a plus-38 rating over his 19 minutes on the court.

“We’re not perfect right now on who should be in with who and how that goes,” Miller said. “He plays hard on defense, made a couple of big steals, did the same thing in last game. He’s one of our team’s best shooters, plays the game with great energy. He might deserve a little bit more. He’s earning it.”

However it works out, the wing depth could become to UA’s advantage. Starters Josh Green and Dylan Smith are now joined by Hazzard, Doutrive and combo guard Jemarl Baker.

“Nobody can really rest on their laurels right now,” Miller said. “Everybody’s on edge to get that opportunity. And that makes for a good atmosphere every day and we’ve had some really good practices. I would fully expect us to continue to have good practices.”

After Arizona received Terry's letter-of-intent Thursday, UA coach Sean Miller said the four-star guard from Tempe was “a five star” in his mind, valuable because of his size and competitive drive.

“We’re really, really excited to have him,” Miller said in his first public remarks about Terry. “I don’t care where he’s ranked.”

The Wildcats have been watching Terry for years, but it was clear last summer that they turned up their recruitment of him a notch.

During one game at the Adidas Summer Championships in Alabama, Miller and two assistants all showed up to watch him -- even as former UA target MarJon Beauchamp was playing on an adjacent court.

“Being from Phoenix, we were well aware of him,” Miller said of Terry. “But any player that you recruit, you want to make sure that we’re a good fit for him, and that he's a good fit for us. And it became very obvious to our staff that he would be a great fit here.”

The Wildcats will likely be able to plug Terry in at any of the three perimeter spots, with his 6-6 frame and defensive potential.

“The thing that I love about him is he is a great competitor,” Miller said. “And although he can play the point guard position, he can play with two-guards. Because he's 6-7, you can really play him anywhere on the court. I also think, like with Josh Green, he has a chance to be just an incredible defensive player.

“He's so unique because he's so tall, and yet he's a guard.”

USC's Nick Rakocevic picks up the conference's player of the week award. 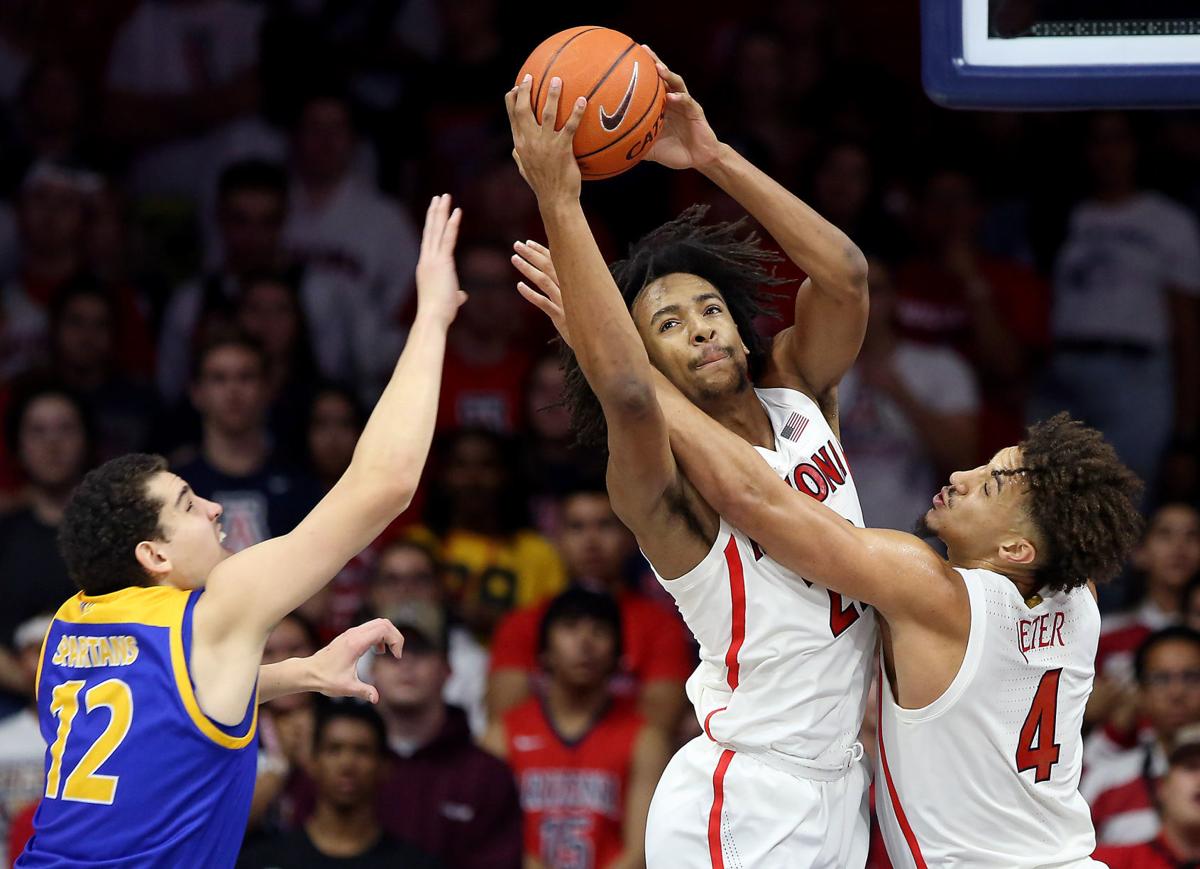 Zeke Nnaji brings down a rebound against San Jose State. The Wildcats forward was a perfect 8 for 8 from the field and collected 11 boards. UA center Chase Jeter is at right. 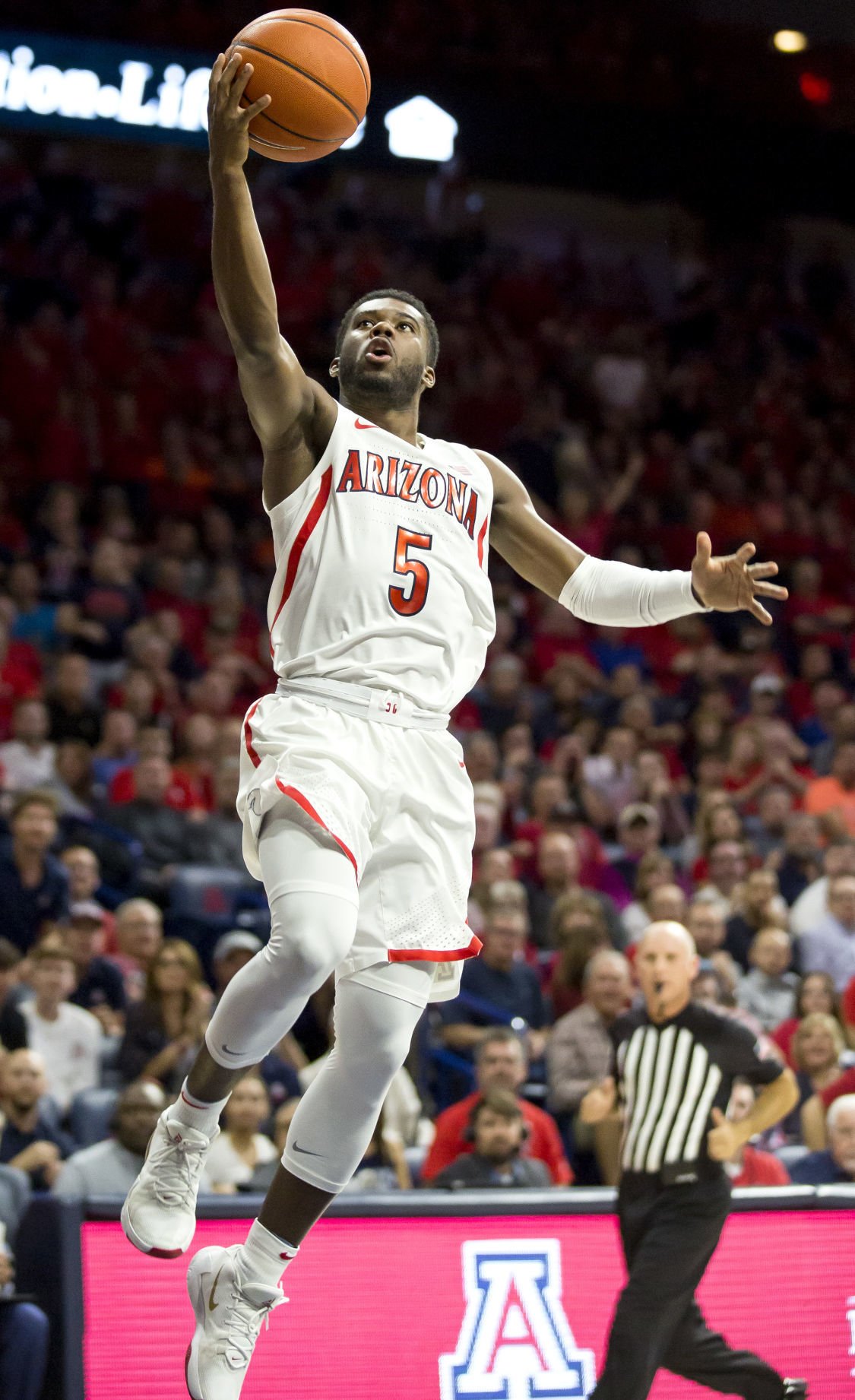 Guard Max Hazzard shoots the ball during the first half of Arizona’s win over Illinois earlier this week.