When Max Hazzard threw in nine 3-pointers over two games last weekend to delight near-capacity McKale Center crowds, some while quickly pulling up from 25-plus feet out, some while barely looking at the net, it wasn’t really supposed to happen like that.

Well, the part about delighting big crowds was.

Recruited by mostly Ivy League schools and other mid-majors out of Los Angeles’ Loyola High School, Hazzard had a bigger stage in mind even as he spent four years at UC Irvine.

That’s why he transferred to Arizona as a graduate last spring, after leading the Anteaters to their first-ever NCAA tournament win last season.

“I always thought I was good enough to play at a high-major,” he said.

But the way Hazzard routinely fires up shots from well beyond the 3-point arc, the way he quickly plants his feet and releases the ball microseconds after catching a pass, those are all a result of things he didn’t have on his mind as a high school player who liked slashing his way to the basket.

Things changed over his past four years.

For one thing, Hazzard tore his labrum and underwent shoulder surgery, redshirting his freshman season at UC Irvine as a result. That injury, and the fact that he’s 6 feet tall with shoes on, sent Hazzard the message that collecting points away from high-contact areas might be a bit easier at the college level.

“I wouldn’t have even have considered myself that much of a shooter when I went to college,” Hazzard said. “Then I got to college, tore my labrum, had to have shoulder surgery and couldn’t get to the basket or finish like I used to. I just couldn’t do all that pounding and the bumping. It was my situation and size.”

And one other thing: Hazzard redshirted in 2015-16, giving him even more time to turn on NBA games, in particular those played by the Golden State Warriors.

In 2015-16, Steph Curry won his first of two straight MVPs. The Warriors guard hit 45.4% of his 3s that season, the shots gliding quickly and artfully off his fingers from a variety of ranges, over and over and over.

“With his emergence, I just fell in love with the way he played and I thought I could try to emulate him a little bit,” Hazzard said. “People don’t realize how fast he shoots it, either. He always gets his feet set, and he just lets it fly.

“It was seeing how skilled he was and how beautiful he shoots the ball, and how effortless it looks.”

Hazzard said Curry also played with the sort of confidence that he simply could not have if he didn’t work constantly on his shot.

So Hazzard modeled that, too. Being from a well-regarded basketball family that includes grandfather Walt Hazzard, a UCLA legend, Max and his uncle worked constantly on his shot.

That work is why Hazzard doesn’t hesitate when the shot is there, why he’s able to release the ball so quickly.

“One of the reminders he just told me was, ‘Stick with your rhythm,’ that rhythm is everything,” Hazzard said. “‘Study long, study wrong’ is kind of what he’s always preached.”

Hazzard’s rapid-fire approach was on display when he hit a combined 9-for-16 3-pointers in the UA’s wins over Utah and Colorado last weekend, raising his 3-point percentage to 39.1.

Three-quarters of his shots are from beyond the arc, often well beyond the arc, so it’s clear he owns the sort of green light UA coach Sean Miller doesn’t always give out.

“Not all of our players are equal when they pull up from 3,” Miller said. “He’s got a quick release, and he’s a little guy as well so sometimes a little further away from the line … that’s what he has to do to get a quality look off. But I put him in that category of he takes an open 3, regardless of where and when, I think it’s a good shot for our team.”

Still, during his transition from Anteater star to Arizona role player, Hazzard hadn’t always been able to make those good shots consistently.

He hadn’t always been able to find that rhythm.

Hazzard said the combination of coming off the bench and playing fewer minutes probably affected his confidence, and the numbers indicated as such.

Not coincidentally, perhaps, he also averaged only 13.5 minutes between the Long Beach and Utah games, and shot just 33.3% from 3-point range.

Hazzard says he’s just wanted to do whatever UA needs but, especially when the Wildcats could have used a 3 and he wasn’t on the floor, it was frustrating.

Actually, Hazzard only became a full-time starter last season as a redshirt junior with the Anteaters.

But last season was different. Hazzard averaged 12.5 points and shot 38.8% and then, in the Big West Tournament final, he scored 23 points on Cal State Fullerton with 5 of 6 3s. The next week, he was a hero in the Anteaters’ historic NCAA Tournament win over Kansas State, scoring 19 points and hitting 5 of 11 3s.

Hazzard didn’t change the mechanics that took him to those heights.

“I just had to stick with what I do in terms of shooting the ball and remaining confident,” Hazzard said. “Basketball is more than over half confidence, and especially being a shooter you can’t get too high or too low. I just had to stay even keeled.”

There were external factors helping, too. At Irvine, Hazzard started along with two other guards he had been with for three seasons, Evan Leonard and Eyassu Worku. At Arizona, meanwhile, he was suddenly sharing the backcourt with freshman Nico Mannion and redshirt sophomore Jemarl Baker at times.

All three of them were new to the UA system, and to each other.

“At UCI, it was so seamless,” Hazzard said. “They knew where I wanted the ball, they knew how to find me, and vice versa.

“But I think you can see Nico and I are starting to play that much better together. I’ve already had pretty good chemistry with Jemarl. He’s always trying to find me and I’m trying to find him.

“And I think as the year progresses, we’ll all start to mesh even better.”

Which means they might find Hazzard in the right spots more often ... which means in turn that the Wildcats might get more of those 3s ... which means that Hazzard, finally, will get the sort of reward he was chasing when he left Irvine last spring.

“I feel like the universe rewards risk-takers, and I’ve always wanted to play at a high-major program,” Hazzard said. “So having that opportunity was just hard to pass up. I wanted to see where I could take it.”

"A part of my heart will always be at UCLA figuratively and literally," he tweets. O'Neal missed the 2018-19 season after undergoing open-heart surgery. 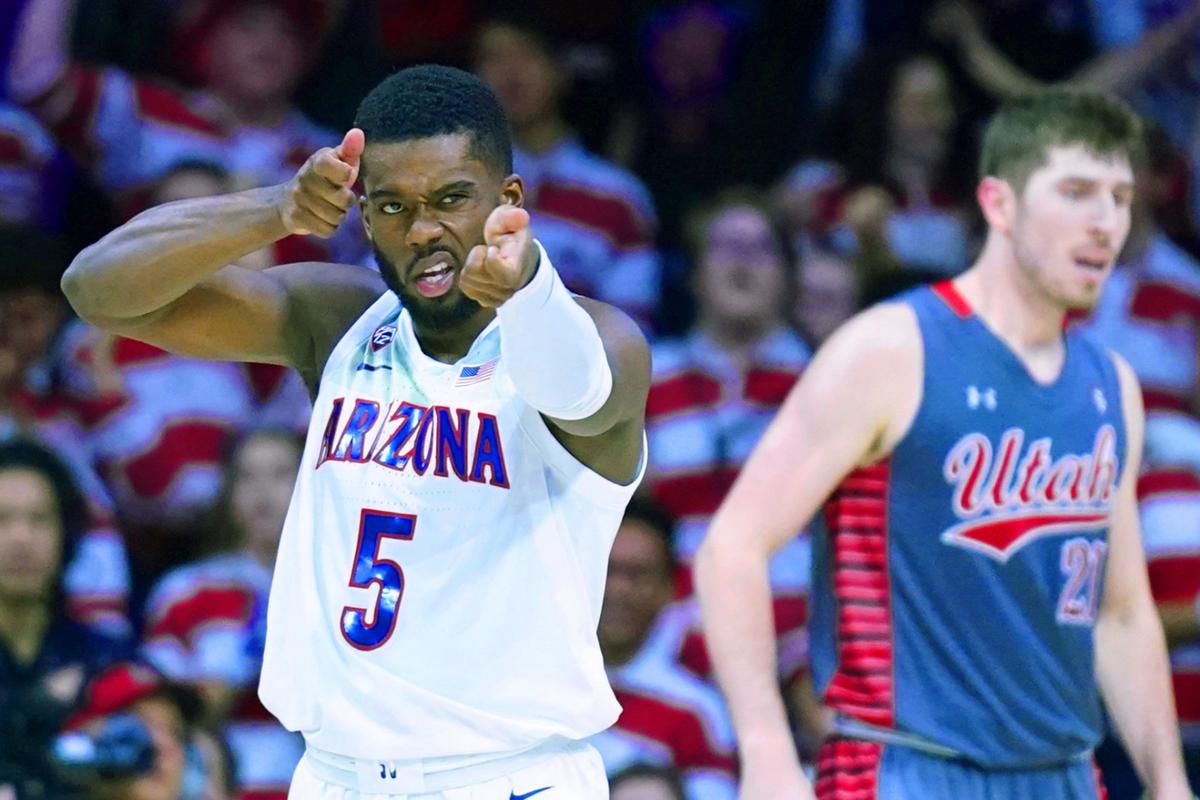 Arizona guard Max Hazzard reacts after making a three-pointer against Utah on Thursday. He was inspired to work on his 3-point game after watching Golden State Warriors star Steph Curry a few years ago. 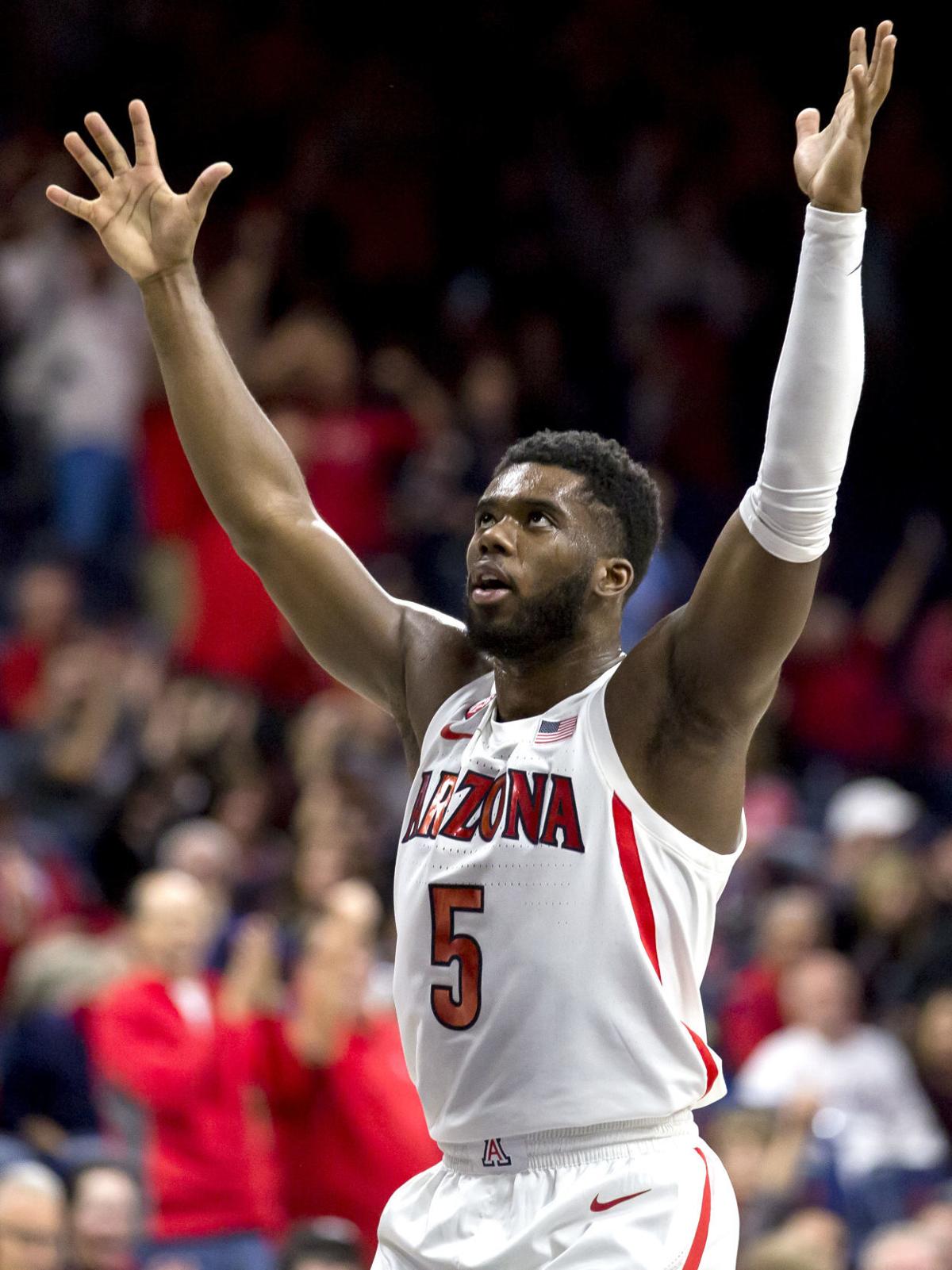 UA’s Max Hazzard scored 14 points with 4-for-6 3-point shooting against Long Beach State on Nov. 24. After that he had no double-digit games until scoring 24 against Utah last week. 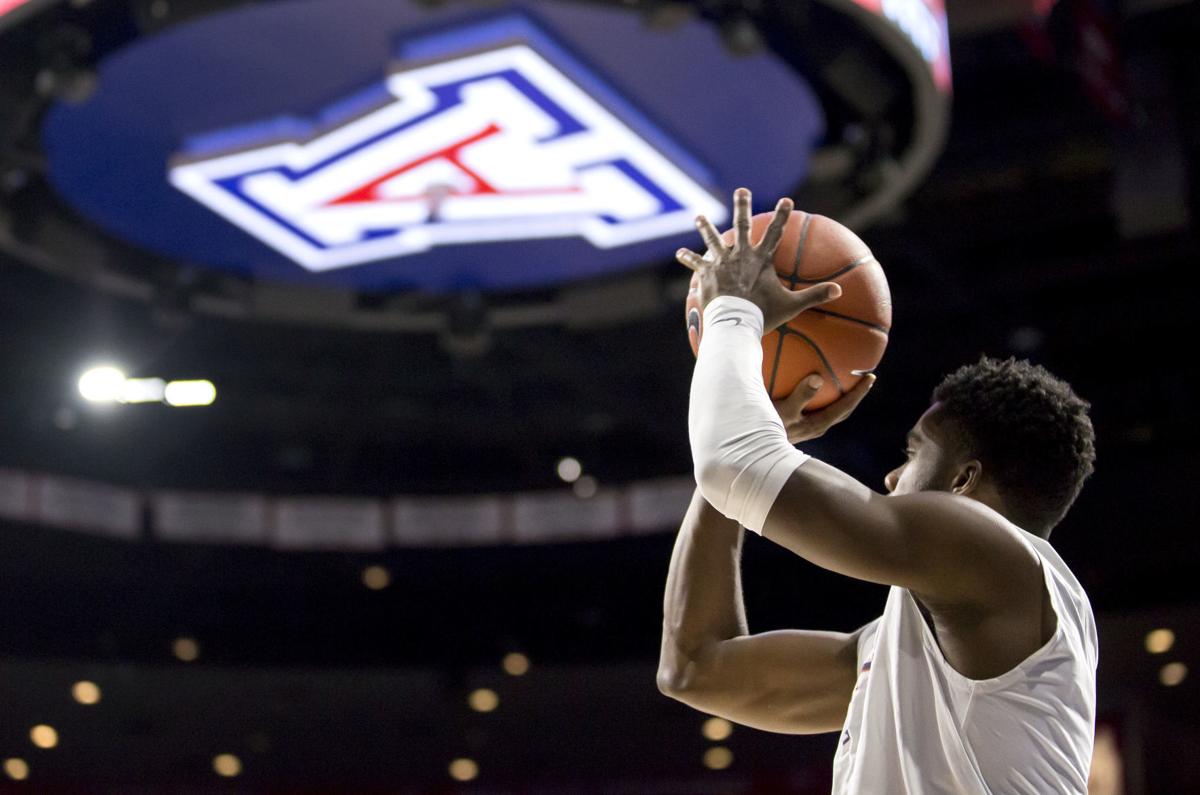