Freshman guard Nico Mannion, warming up before the Long Beach State game last month, wasn’t able to practice through Wednesday due to back tightness. The undefeated Wildcats face their toughest test of the season so far when they visit No. 18 Baylor on Saturday. 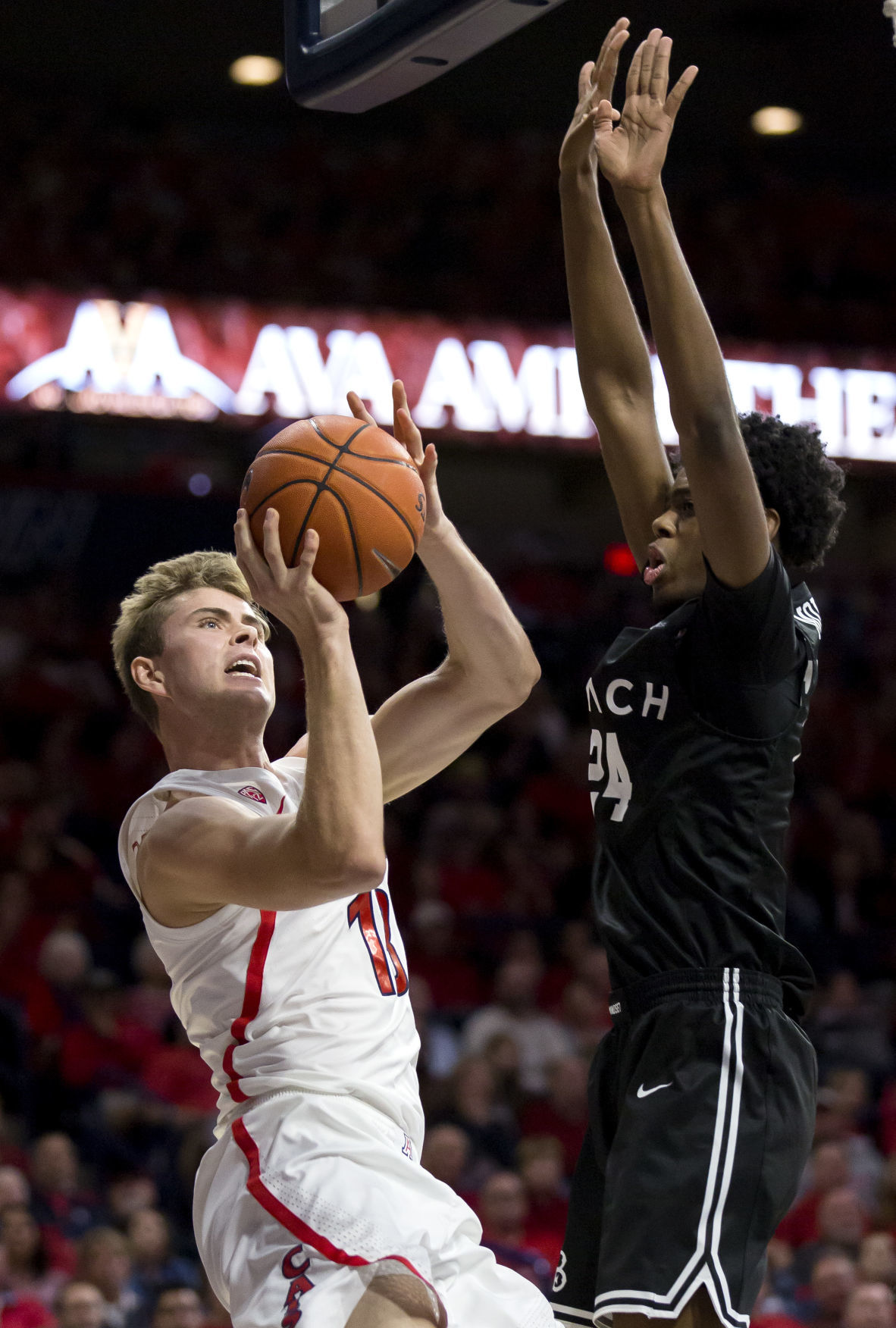 Arizona’s Stone Gettings, left, is not expected to play Saturday after suffering a concussion and facial fracture last week.

Already facing by far their toughest test of the season Saturday at Baylor, the Arizona Wildcats learned this week it might be a little more difficult.

A follow-up X-ray revealed backup forward Stone Gettings suffered a facial fracture last Friday against Penn, in addition to the concussion he suffered, while starters Nico Mannion (continued back tightness) and Josh Green (strep throat) could be limited against Baylor after missing two practices earlier this week.

Speaking before Thursday’s practice, UA coach Sean Miller said Gettings would be out indefinitely but that he wasn’t sure how much Green and Mannion would play because they hadn’t been available to practice.

Typically, UA players who miss significant practice time before a week do not start, but Green and Mannion had both Thursday and Friday’s practices to prove themselves and are expected at least to play. (Miller does not usually issue further health updates after his weekly news conferences until the next game.)

“You have to practice to play in the game, certainly to start, because it’s a team sport,” Miller said. “We’ll see how those two guys are.”

Once he rewatched a little game video from last weekend, Miller didn’t have to see any more about Gettings, who took a hard hit against Penn in the Wooden Legacy semifinals.

“A very, very tough play. You don’t see it much in basketball,” Miller said. “He got tackled right there on the left block. He got the guy on a pump fake and the guy dismembered him. The guy was in the air and Stone was on the ground and had to go in the air — and both forces met.

“Disappointing there was no foul called, but that happens.”

Gettings stayed in the team hotel during Arizona’s game with Wake Forest on Sunday and took an X-ray upon returning to Tucson. Miller said Gettings has made some progress this week with the concussion itself, but said the fracture means Gettings will likely have to wear a mask for a while whenever he does return.

Since Gettings was already unlikely to play against Baylor because of the concussion — and considering how indispensable Mannion has been — Mannion’s back is a more pressing issue for the Wildcats. Miller said Mannion probably would be able to play Saturday at Baylor but “in what role, I don’t know.”

After the Wooden Legacy championship game last Sunday, Mannion said he didn’t feel as quick laterally even after trying to rehab the injury the day before. He also shot just 3 for 11 from the field on Sunday against Wake Forest after going 11 for 14 against Penn two days earlier.

“But I’ll be good for the next one, I’m going to get home and recover,” Mannion said then. “We’re all a little beat up here playing three games in four days.”

While it’s hard to imagine Mannion playing only a limited role if he’s on the floor, if he does, that likely means more minutes for Jemarl Baker.

The sophomore transfer from Kentucky is averaging 7.2 points and 2.9 assists per game with just three turnovers to his 26 assists, playing an average of 16.8 minutes at both guard spots off the bench so far.

Yet, thanks to UA’s resiliency, none of this appeared to be much of a worry to junior forward Ira Lee, the player UA made available for comment Thursday. Lee said practices were still productive without the three players and that he expected Mannion and Green to return.

“So I don’t think there’s that much of a drop off from practice.

“Obviously we missed having them and they’ll be good for Saturday, but I don’t think there was any drop-off in practice.”

Lee already played four minutes above his average on Sunday against Wake Forest without Gettings around, and Miller said he could stay deep by looking to freshman center Christian Koloko, which he did briefly on Sunday.

Another option, Miller said, is to play Green at power forward along with three other perimeter players in a smaller lineup, something the Wildcats have already briefly experimented with.

In a way, though, maybe playing a ranked team on the road, and with health issues to boot, is the kind of test the UA needs at this point.

Miller says he would categorize his team as having only “early season success” so far, knowing things will get tougher the rest of this month.

After the visit to Baylor, Arizona will have a home game with Omaha on Dec. 11, a showdown with Gonzaga on Dec. 14 and a semi-neutral game against St. John’s on Dec. 21 in San Francisco.

“I think these four remaining nonconference games are going to challenge us in a big way,” Miller said. “But not until sometimes you fail, or you really get that true test of ‘this is what it feels like to play a great team,’ do you have everybody’s attention.

“And, you know, our team right now might need that. For sure.”

Authorities said a man apparently shot his girlfriend to death before taking his own life in a Catalina Foothills apartment last week.

Warmer than normal temps expected in Tucson this weekend

Freshman guard Nico Mannion, warming up before the Long Beach State game last month, wasn’t able to practice through Wednesday due to back tightness. The undefeated Wildcats face their toughest test of the season so far when they visit No. 18 Baylor on Saturday.

Arizona’s Stone Gettings, left, is not expected to play Saturday after suffering a concussion and facial fracture last week.