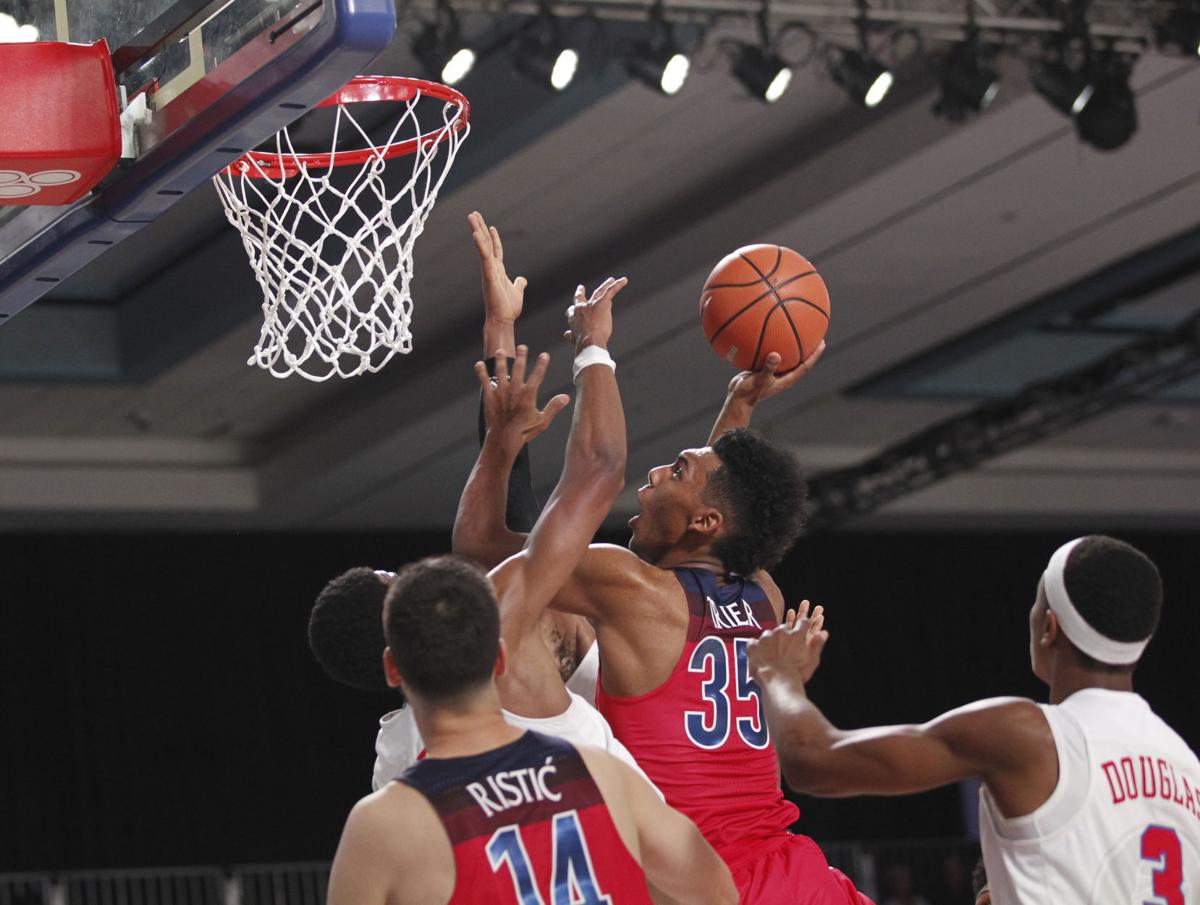 Arizona guard Allonzo Trier heads to the basket against SMU in the Battle 4 Atlantis tournament in Paradise Island, Bahamas. Trier had 22 points on 8-for-16 shooting. 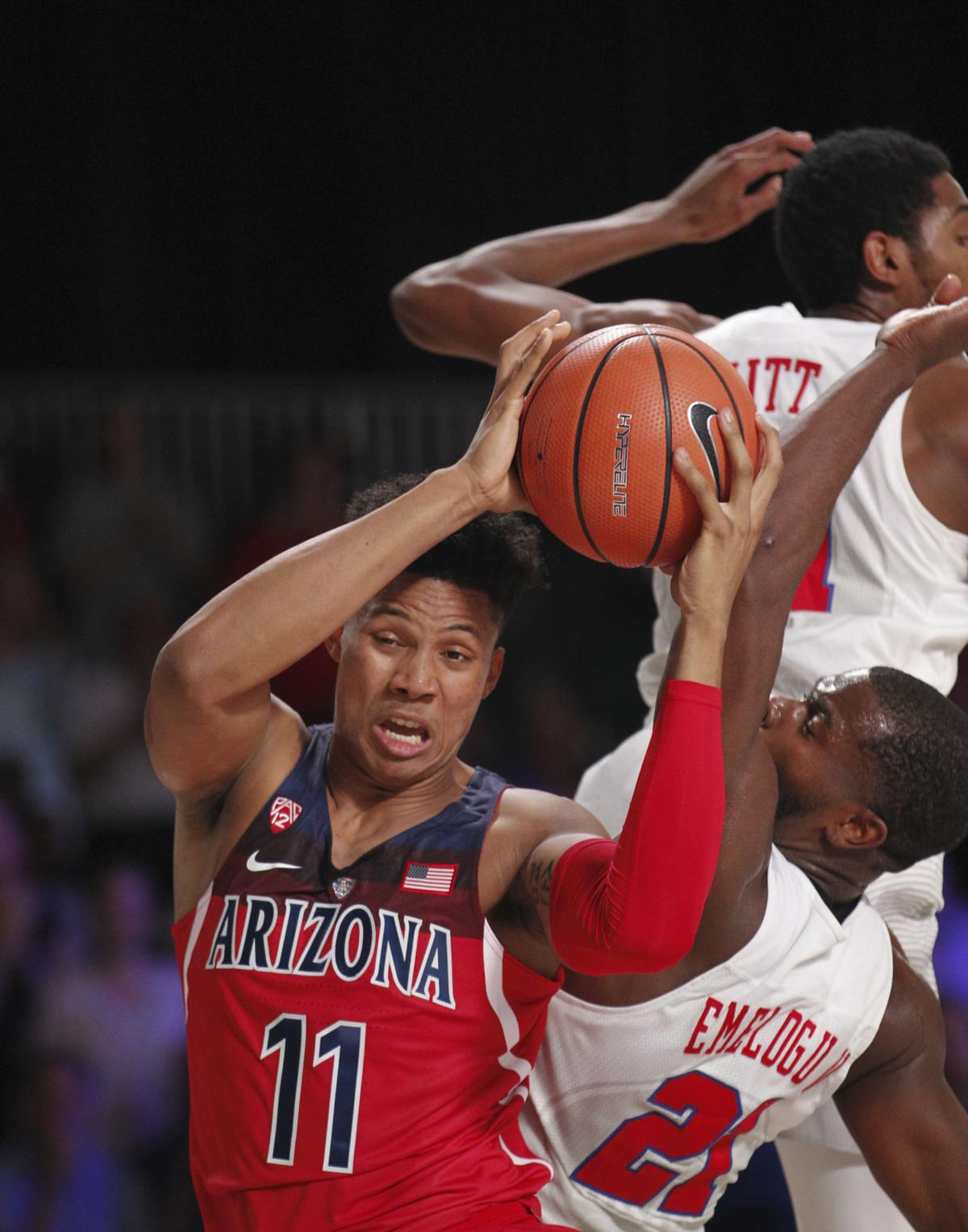 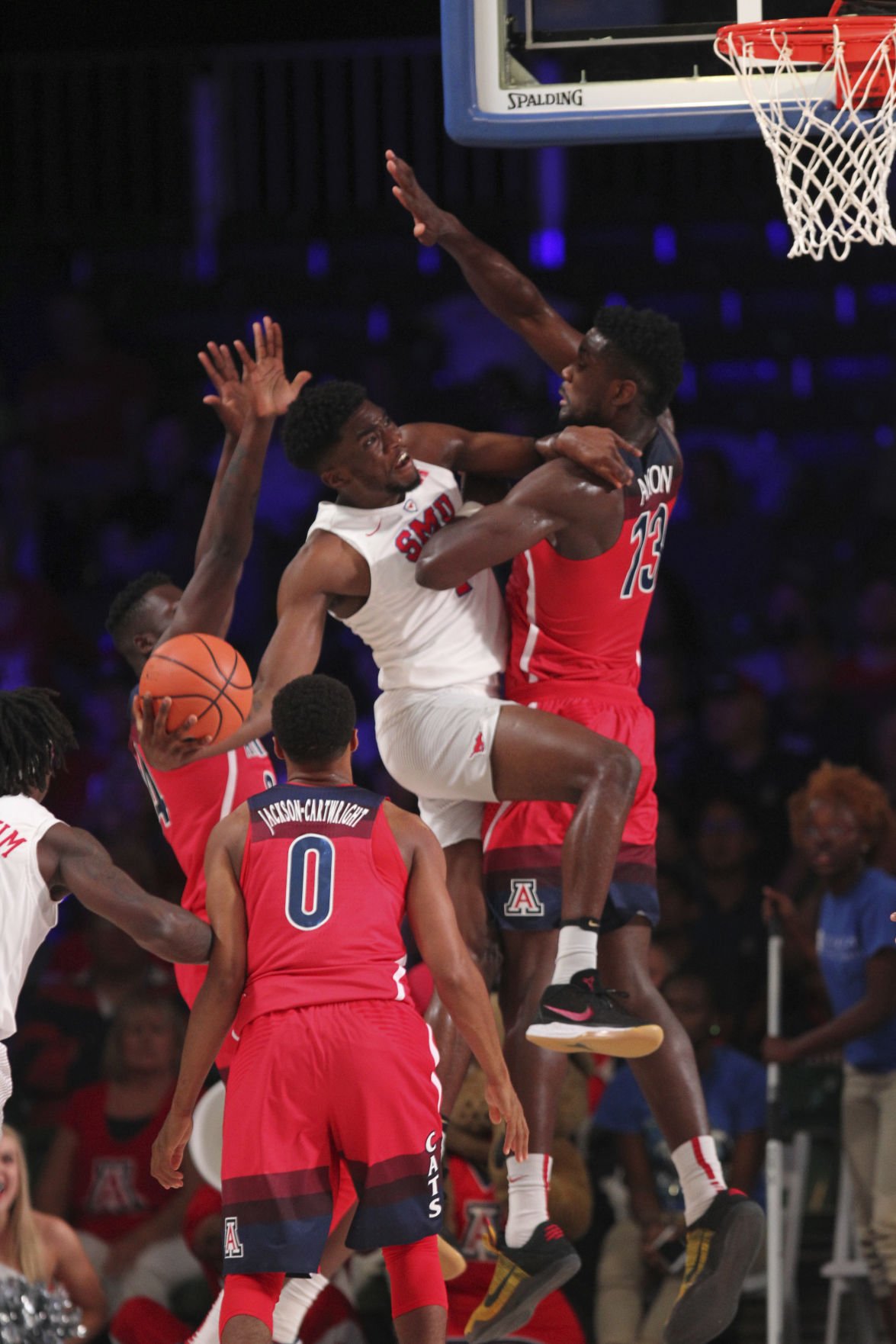 Deandre Ayton (13) averaged 22 points and 12.3 rebounds during the Wildcats’ three-game trip to his native Bahamas. 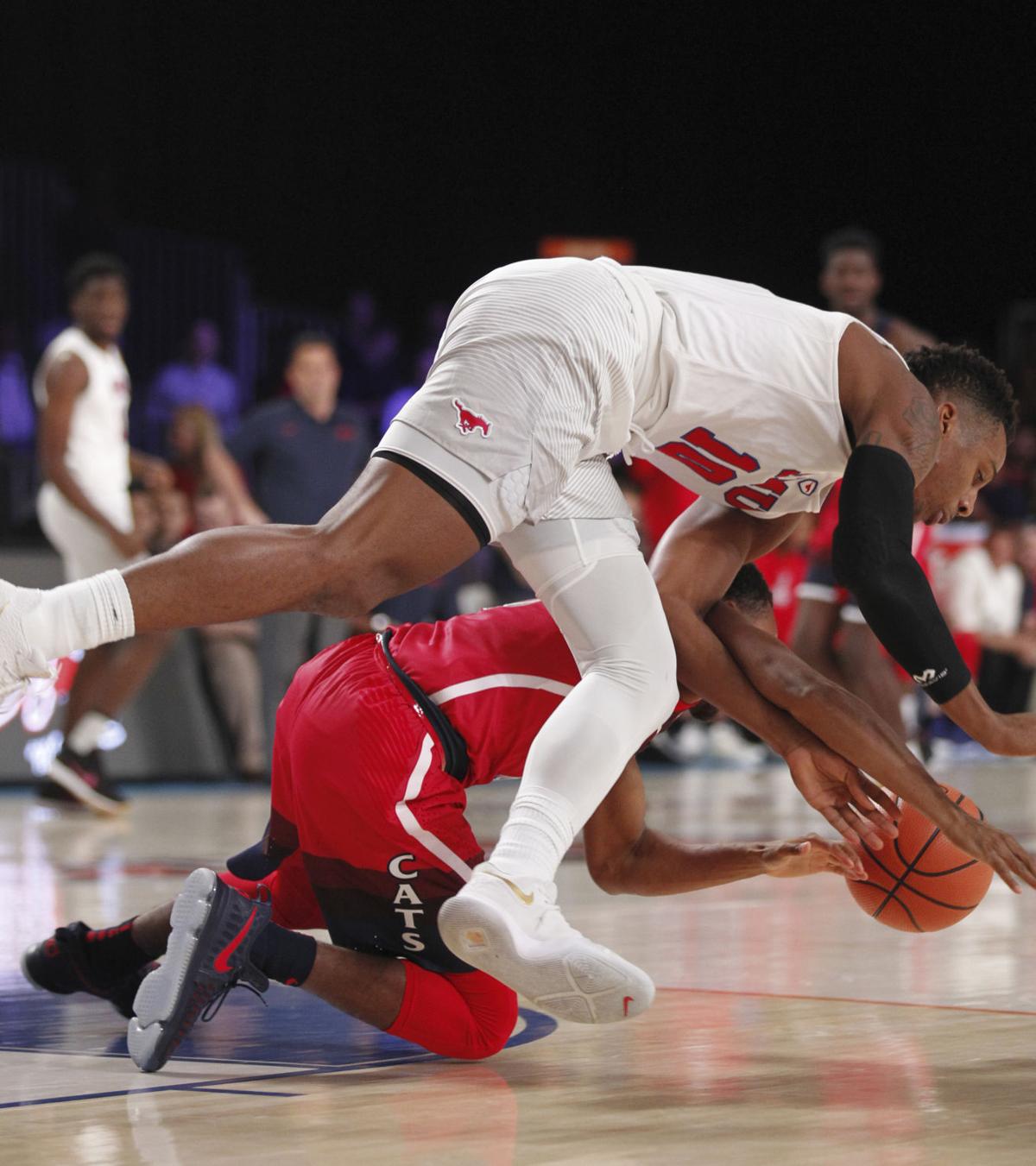 That didn’t help much Thursday. Except for stars Deandre Ayton and Allonzo Trier, who combined for another 39 points, the Wildcats looked out of sorts at times and, well, greasy-fingered in a 66-60 loss to SMU.

The Wildcats coughed up 20 turnovers, allowed SMU to collect 20 offensive rebounds and hit just 5 of 20 3-pointers in the loss to SMU.

All that negated the improved defense Arizona showed in holding SMU to 31.4 percent shooting.

The loss dropped UA all the way to the seventh-place game of the Battle 4 Atlantis, where the Wildcats will face Purdue at 7:30 p.m. (Tucson time) Friday. Both Arizona (No. 2) and Purdue (No. 18) entered the event ranked in the AP Top 25 but have lost twice. The losses dropped UA to 3-2 while Purdue is 4-2.

On Thursday, Ayton had 17 points on 6-for-11 shooting and a career-high 15 rebounds to lead the Wildcats again in his home country, while Trier had 22 on 8-for-16 shooting.

But SMU scored 19 points off UA’s 20 turnovers, the last a pass from Parker Jackson-Cartwright that went directly into the hands of SMU guard Jarrey Foster with 1:31 left and all but sealed the win for the American Athletic Conference team.

The Mustangs made up for their shooting woes thanks to their offensive board work and UA’s turnovers.

“Couldn’t be more proud of our guys,” SMU Tim Jankovich said. “I’ve always said the best games you win are when you can’t get the ball in the basket but find a way to win anyway. … I saw some fighting cats out there and I loved it.”

“Given what they’ve done here, they must be really, really good,” Jankovich said.

After holding on to a 31-30 halftime lead, the Wildcats let SMU quickly build a 51-40 lead early in the second half, with the Mustangs shooting 55.9 percent overall and hitting 3 of 4 3-pointers over the first 4:31 of the second half.

But Trier and Ayton made up for all of it themselves, with Arizona then going on a 13-0 run with Trier scoring seven points and Ayton the other six. The run could have been even greater had UA guard Alex Barcello not turned the ball over twice during the stretch.

The game stayed close the rest of the way, though SMU pulled away with a seven-point lead with 1:07 left and hung on from there.

SMU took 70 shots to UA’s 47, in part because of UA’s turnovers and SMU’s offensive rebounds.

“We took 23 more shots than they did and that’s huge,” Emelogu said.

While completing his fifth double-double in as many games as a collegian, Ayton slammed in a number of emphatic dunks for a team that needed a spark. He is believed to be the only UA freshman to start his career with five straight double-doubles, according to UA.

After a shocking loss to North Carolina State in the Battle 4 Atlantis quarterfinals, Arizona shored up its defense in the first half but the Wildcats captured only a 31-30 halftime lead. Arizona had an early 10-point lead before its turnover issues surfaced; by the end of the half, nine UA turnovers became 12 SMU points.

Trier led UA in scoring in the first half with nine points while Emelogu had 14. Ayton had just five points and three rebounds after 20 minutes

Having suffered an upset loss Wednesday to North Carolina State that dropped them into the consolation bracket, the Wildcats still came out with motivation to start the game. They held the Mustangs scoreless for the first 3:14 and held leads of up to 10 points in the first six minutes.

But SMU made it a close game thanks to the heroics of Emelogu, who scored his 14 points on 5-for-9 shooting, while making 3 of 5 3-pointers.

The Bahamian big man is expecting a big reception when the Arizona Wildcats open play at the Battle 4 Atlantis Wednesday.

Wildcats could sign up to five players this year.

Team will head to the Bahamas next week after starting season 3-0.

'Trying to outscore the other team isn't going to work': Wildcats, coach Sean Miller double down on 'D'

Arizona will face SMU on Thursday at 7:30 p.m. in the second Battle 4 Atlantis game.

The No. 2 Wildcats spent Thanksgiving Day in the Bahamas, losing for the second straight night and this time to Southern Methodist. Here's how…

Arizona-Purdue pregame: Can a zone defense save the Wildcats?

Sean Miller wants to keep Dusan Ristic on the floor even against small-ball teams.

It's safe to say the No. 2 Wildcats and No. 18 Boilermakers weren't expecting to play for seventh place in the Bahamas this week. But after a …

Two bees' nests were each several feet high at the house.

Improvements to restoration plan may help lure rare sparrows back.

Option attack makes Lions one of the state's most effective offenses, at any level.

Arizona has now lost three straight games for the first time since 2009-10.

It was anything except a happy holiday for the Wildcats on Paradise Island, losing three straight games for the first time since 2010. With a …

Friday night's loss to Purdue was the team's third in as many nights.

The Arizona freshman averaged 22 points, while his teammates average 47.3 combined.

Tucson's high temperature Saturday broke a record that was set in 1894, according to the National Weather Service.

Score as many points as can be scored in football and forget about defense. Looks like our Cat basketball team is morphing into the same genre…

Arizona guard Allonzo Trier heads to the basket against SMU in the Battle 4 Atlantis tournament in Paradise Island, Bahamas. Trier had 22 points on 8-for-16 shooting.

Deandre Ayton (13) averaged 22 points and 12.3 rebounds during the Wildcats’ three-game trip to his native Bahamas.