Once again Sunday, the flaming hot hands of Zeke Nnaji suggested that it’s a pretty good idea for the Arizona Wildcats to get him the ball.

The only question is how often, especially considering all their other emerging options and quest for balance, the Wildcats will actually do so.

During Arizona’s 83-53 destruction of New Mexico State at McKale Center, Nnaji hit all seven shots he took to extend his made field-goal streak to 17, while adding five free throws to a parallel streak of 13 a row from the line.

“My teammates, they’ve been giving me the ball in great places to score,” Nnaji said, “and I’ve had a lot of easy looks.”

Well ... two things about that statement: Nnaji actually hit some tough midrange shots — and his teammates probably could have found him more often in the second half.

Nnaji didn’t take a single field goal after halftime, though he was fouled on two plays that likely would have resulted in shot attempts.

The Wildcats survived just fine without any more Nnaji magic inside, thanks in part to a career-high 16 points on four 3-pointers from backup guard Jemarl Baker, but it wasn’t quite the right balance UA coach Sean Miller was looking for.

“It’s our job as a coaching staff to recognize who’s playing well offensively and when that player has the hot hand, you want to continue to put the ball in his hands in scoring position,” Miller said. “It’s important to have balance.

“And also, if you’re a good player you recognize, ‘Hey, Zeke hasn’t missed.’ So, we want him to shoot nine times instead of seven.”

But balance also means, in some cases, turning away from a 3-point attack that on Sunday connected on 10 of 21 attempts against the compromised Aggies, who are playing without well-regarded point guard AJ Harris and several other injured players.

Baker, for one, fired off his six 3s while knowing full well that Nnaji was what he called “a beast” since the days the Wildcats began playing pick-up ball last summer.

So which way does Baker turn? Which way do the Wildcats turn?

Even in transition, something this particular group of Wildcats appears particularly effective in, Miller said it’s important for them to look for both 3-pointers and feeds to Nnaji and even center Chase Jeter, who made 2 of 3 shots while collecting eight rebounds.

“Big guys, they’re like those offensive linemen sometimes,” Miller said. “It’s like you want him to block, block, block, block, but you got to give him some sugar. In basketball, they gotta get the ball once in a while.”

As it turned out Sunday, Arizona’s five players in the two post spots combined for 20 out of the team’s 57 shots, while the perimeter players took 21 3-pointers and hit them at a 47.6% rate.

Either way, against the Aggies, they were close to unstoppable.

UA wound up shooting 52.6 percent overall and was just as impressive defensively: The Wildcats held NMSU to 32.7 percent shooting and converted 20 Aggie turnovers into 25 points.

It wasn’t just perimeter defenders Josh Green and Dylan Smith limiting dynamic NMSU scorer Trevelin Queen to just 12 points on 5-for-15 shooting, either. Miller said the Wildcats’ interior defense was the best it has been during UA’s four games so far, also.

The Wildcats opened with inspired defense, taking a 10-0 lead at the first media timeout while NMSU missed its first five field goals. Nico Mannion and Smith each hit 3-pointers during the opening stretch while Nnaji and Jeter scored inside.

Then, even though two 3s from Queen later helped NMSU pull off a 10-2 run to creep within 15-12, Nnaji hit three inside baskets during a 15-2 run. That gave UA a 30-14 lead with six minutes left and it led by double-digits the rest of the way.

“Our defense in the first half reminded me kind of where we were a couple years ago,” Miller said. “We had 25 (NMSU shot) deflections at half and our goal is between 25 and 30 for a game. That shows you we had a lot of players playing with tremendous effort and also being in the right place.”

Miller said the Wildcats’ depth should allow them to sustain that sort of defensive intensity and wear other teams out, which is pretty much what happened Sunday.

In his short UA career so far, Mannion has already shown he likes to rise up to the challenge. He had 23 points and nine rebounds against Illinois on Nov. 10 and on Sunday, had 10 points in less than six minutes after halftime while apparently carrying on a little conversation with the Aggies.

After Mannion made his second of two 3s within 35 seconds early in the half, he left a few words for NMSU guard Terrell Brown — only to have an official standing right behind Brown overhear them.

Mannion was whistled for a technical, giving him three total fouls and Brown two free throws (he made only one of them).

While Mannion wasn’t made available for comment after the game, Miller indicated Mannion’s technical may have been a result of some ongoing verbal activity.

“Those guys play really hard at New Mexico State, they pressure, and I’m sure they were talking a little bit,” Miller said. “There’s nothing wrong with guys competing against each other. I was disappointed it ended in a technical, but that’s something Nico will learn from.”

Not that any of that really mattered in a game UA led by 28 at that point. Of course, it may matter in a closer game if a T gets Mannion in foul trouble.

But that game wasn’t Sunday’s game. And besides, in general, Miller said he was OK with that sort of competitiveness.

So did the rest of the Wildcats.

They’re 4-0 now, climbing the Top 25 polls, with a defense dripping potential and an offense full of potent options.

Including, at least for now, a sure thing in the middle.

“I can’t say enough about Zeke on offense,” Miller said. Seventeen shots in a row “pretty much speaks for itself.”

Arizona pummels Aggies by 30 to continue red-hot start to season.

Check out a photo gallery from Arizona's landmark win.

Firefighters will be burning 25-acres of slash piles from forest thinning on Mount Lemmon over the next three days, officials say.

USC's Nick Rakocevic picks up the conference's player of the week award.

Arizona's Zeke Nnaji can't miss a shot — but his teammates aren't too shabby, either 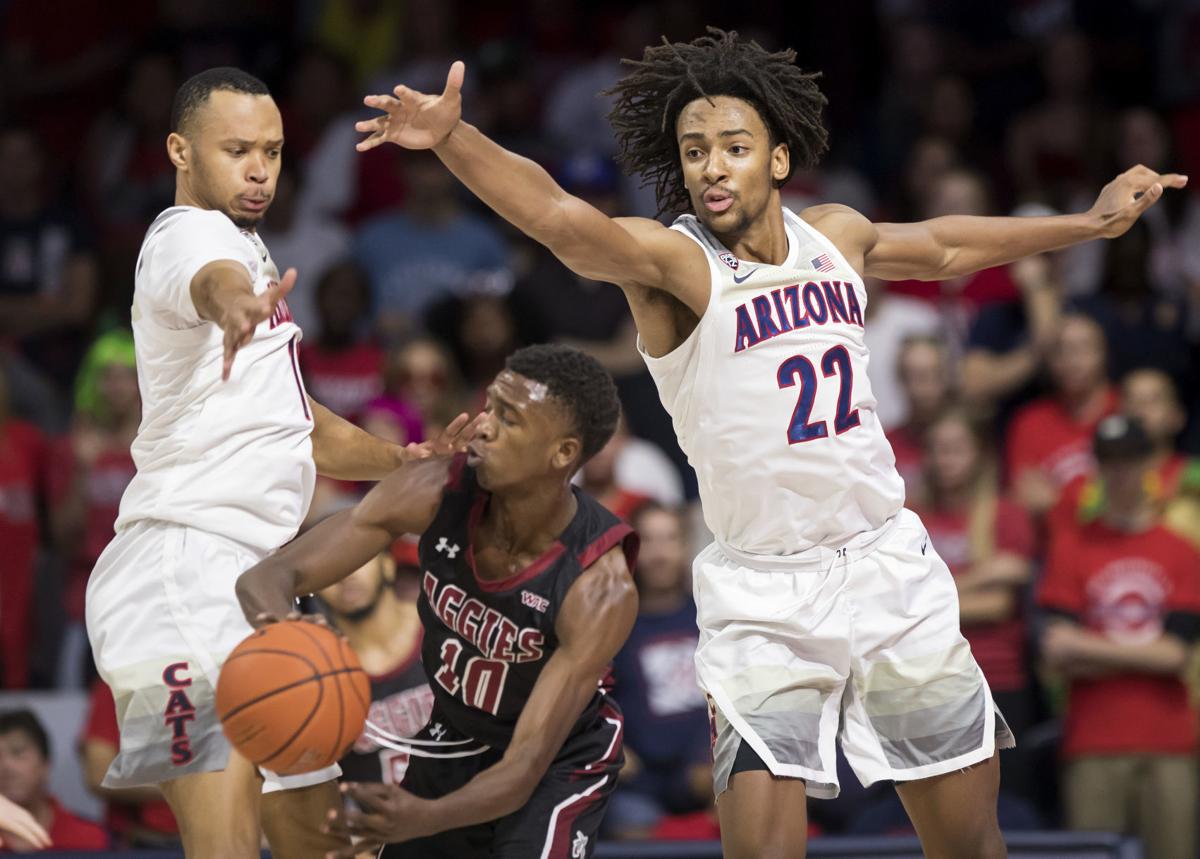 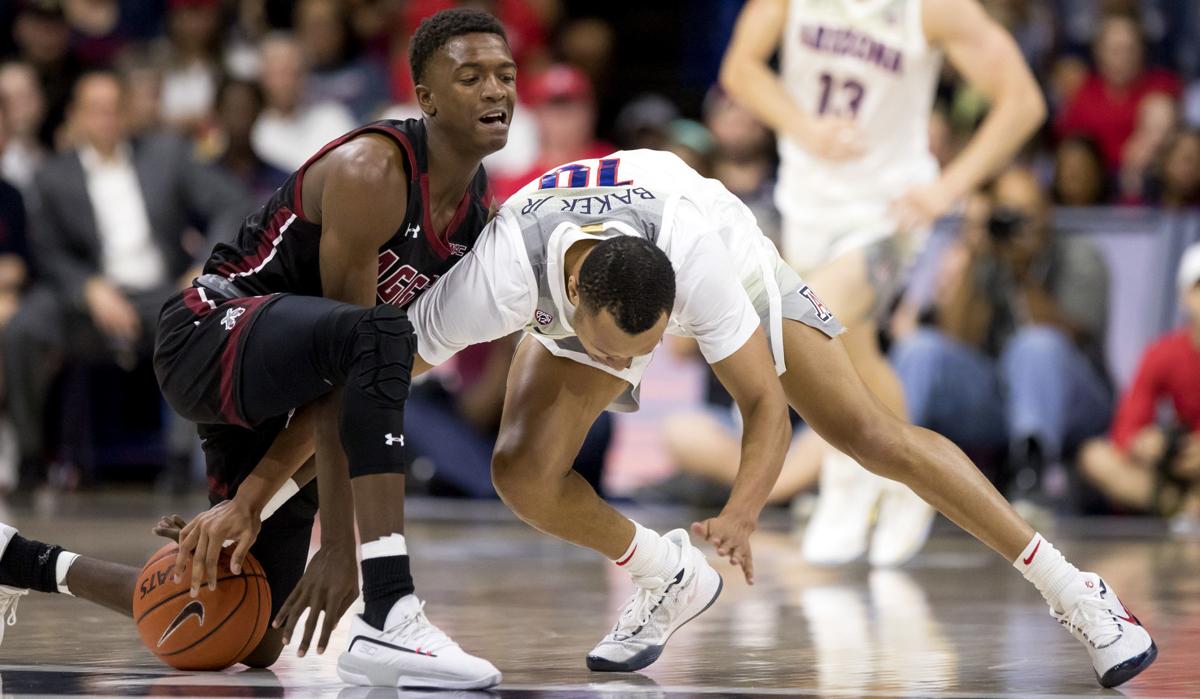 UA’s Jemarl Baker Jr., right, tries to steal the ball from Jabari Rice in the first half. Baker had 16 points in 17 minutes as the Wildcats improved to 4-0.