The last few seconds ticked off the clock Thursday night, and the Arizona Wildcats wrote themselves into the record books. Twice.

The Wildcats’ 77-42 win over Tennessee State improved Arizona to 10-0 this season, the best start in program history. Their 16-game winning streak, dating back to last year’s WNIT championship run, is the longest ever by an Arizona women’s basketball team.

Forward Cate Reese led all scorers with a career-high 23 points and guard Aari McDonald added 17 points and 12 rebounds for the 18th-ranked Wildcats, who played in front of 3,8891 fans in McKale Center.

UA took the lead early, yet it wasn’t until senior point guard Lucia Alonso entered the first quarter with 3:58 left, that the Wildcats put their foot on the pedal and completely took over. Alonso, a steadying force, finished with seven points and four assists.

The Wildcats started using their size inside with the twin towers of the 6-foot-2-inch Reese and the 6-6 Semaj Smith to combine on four easy baskets to extend the lead to 14-6. Smith added five rebounds in the quarter.

With 5:05 left in the third quarter, Smith used her size again on defense to tip a ball to Helena Pueyo, who ended up with an easy basket on the other end.

For most of the game, the Tigers were collapsing on and fouling McDonald in the paint when she was driving. McDonald broke through in with in the second quarter on back-to-back fast breaks — one where she flew in the air to steal a pass. She finished the half with nine points and nine rebounds.

Arizona’s defense, which ranks among the best in the nation, was disrupting TSU all game. The Wildcats deflected passes, came up with steals and narrowed the passing lanes. TSU couldn’t break the pressure. Thursday marked the sixth consecutive game that UA has limited its opponent to under 44 points.

Was this @cate_reese’s best game at Arizona?23 points on 9-13 shooting, two 3’s and 6 rebounds.“I did have a decent game today." pic.twitter.com/YPNhM5pYEE

• Nine Wildcats scored in Thursday's blowout, with Amari Carter — who shot 0 for 3 from the field — the only player who saw the floor and didn't score.

• The Wildcats shot exactly 50% (27 for 54) from the field, and topped Tennessee State in every statistical category except for turnovers. The UA committed 24 of them, one more than TSU.

• McDonald scored nine of her 17 points on free throws, missing just three of them.

• Sam Thomas is the only player in school history to have 100 three-pointers and 100 blocks.

Wildcats' pestering, prideful defense ranks among the best in the nation

No one, not even UA coach Adia Barnes thought the Wildcats would be tops in the nation so quickly. The 18th-ranked UA hosts Tennessee State on Thursday night.

Cate Reese adds a move, steps up when Wildcats need her

Sophomore averaging 13.8 points and 8.0 rebounds for No. 20 UA, which visits UTEP on Saturday. 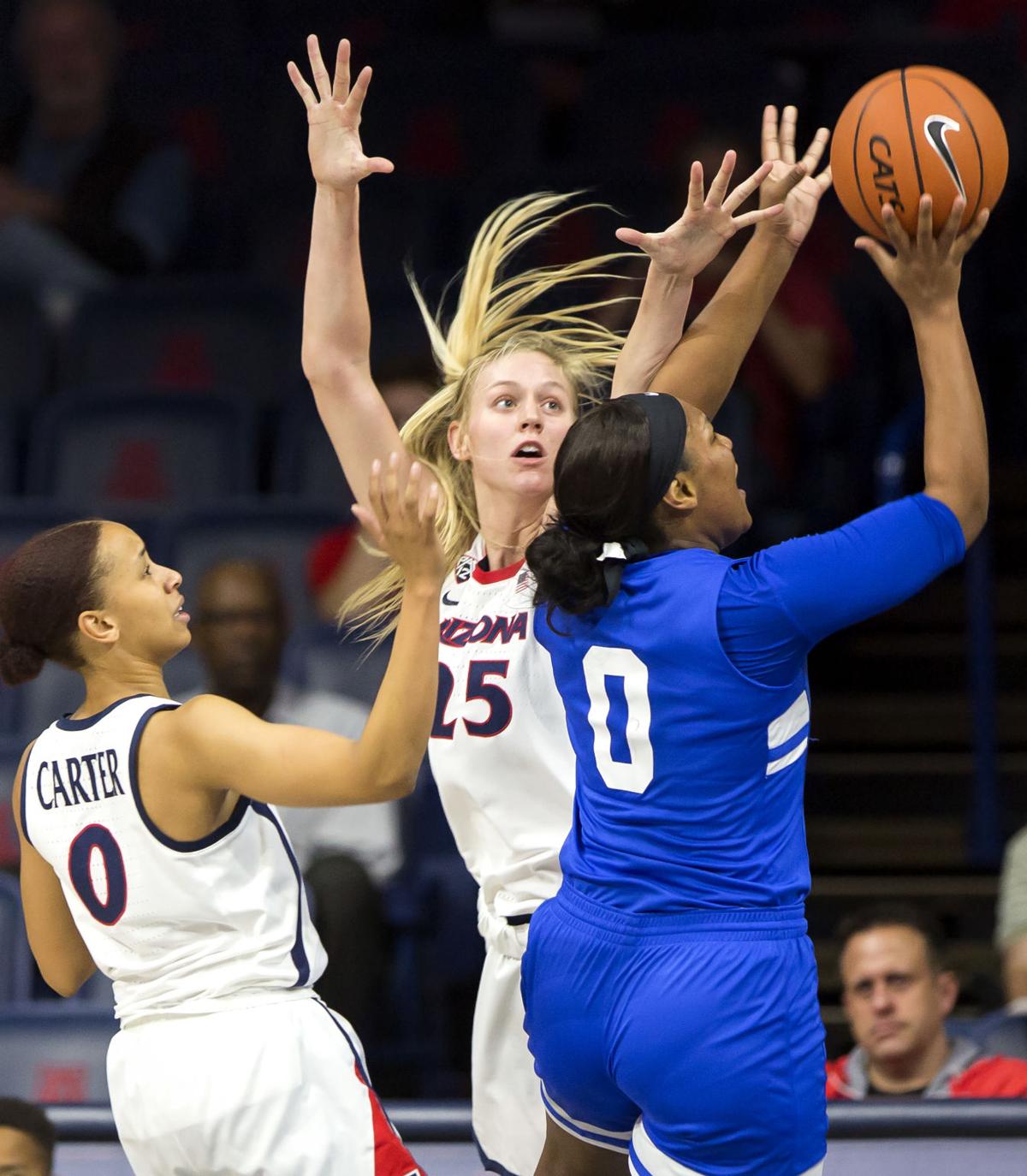 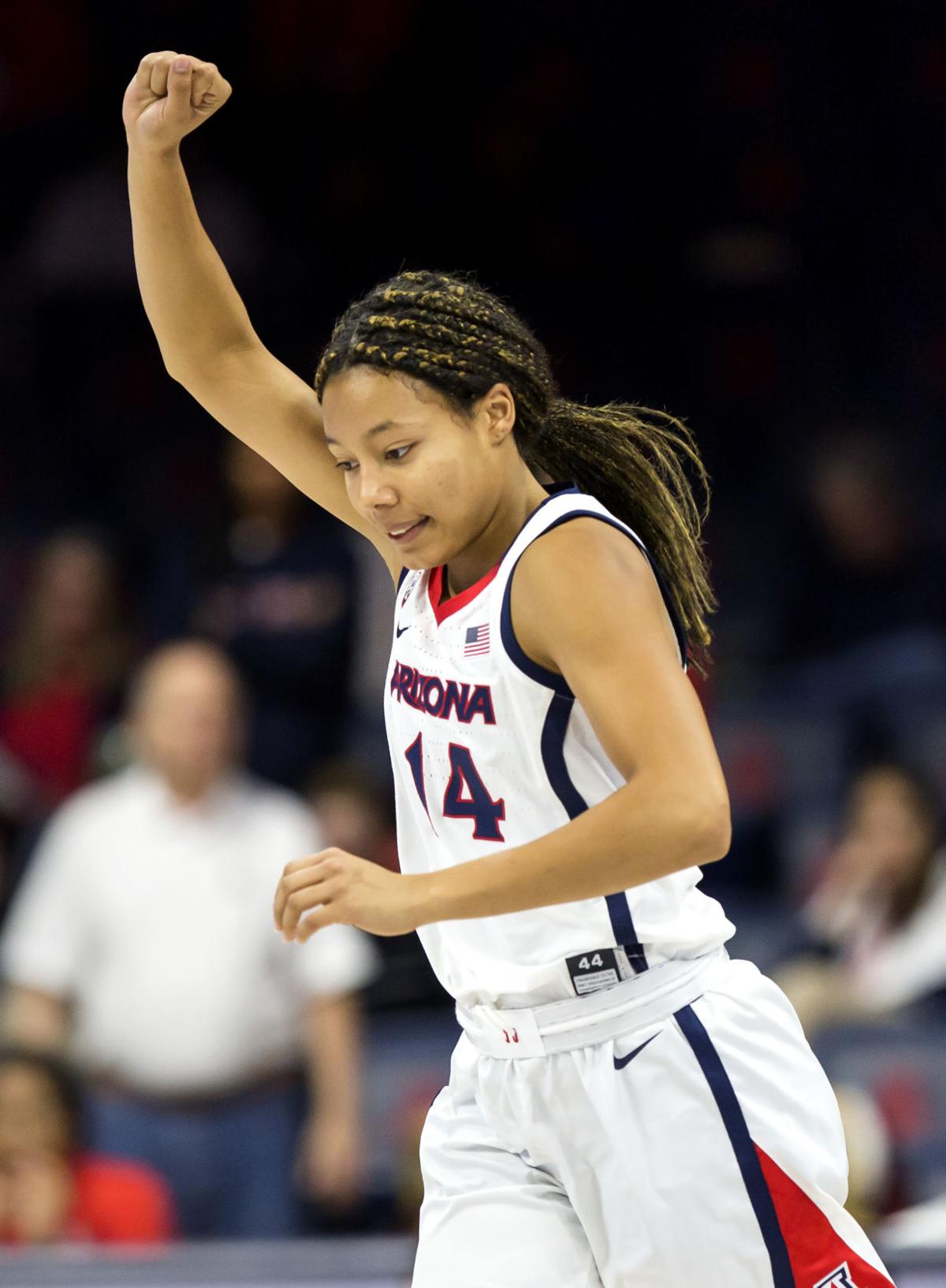 Arizona forward Sam Thomas (14) calls a play during the first half of Arizona's NCAA women's basketball game against the Tennessee Lady Tigers at McKale Center on December 12th, 2019.